Methods: A retrospective analysis was performed on all patients diagnosed with HCC on final pathology between 1997 and 2008. The tumor size and lymph node status was obtained for each patient. The data were analyzed utilizing Student's t-test and the Fisher's exact test to calculate the two-tailed p-value.

Results: Out of 39 patients diagnosed with HCC 3(8%) had LN metastases; 1 had ipsilateral central LN metastasis and 2 had ipsilateral central and lateral LN metastasis. LN dissection was performed in patients with known metastasis (2 were evident on preoperative ultrasound and 1 intraoperatively). Patients with LN metastasis were older than those without (mean age: 86.7 and 56.4 years, respectively), had larger tumors (mean size: 6 and 4 cm) and were commonly male (2 of 3). No tumor < 5cm presented with lymph node involvement (3/15 with >5cm cancer had node metastasis, 0/24 with <5cm cancer had node metastasis).

Conclusions: Similar to what has been found in patients with papillary thyroid cancer, older male patients with Hürthle cell carcinomas greater than 5cm are more likely to have lymph node metastasis. Our data suggest that these patients may benefit from a prophylactic ipsilateral central neck dissection at the time of their initial operation.

Hürthle cell carcinoma (HCC) is a distinct and rare subtype of well-differentiated thyroid cancers. The aggressive nature of HCC stems from the higher propensity for multifocality, lymph node (LN) metastasis and distant metastasis compared to the other types of well-differentiated thyroid cancer. The limitation, however, is the difficulty in obtaining an accurate diagnosis preoperatively. Unlike the more common papillary thyroid cancer, HCC cannot be diagnosed on fine-needle aspiration (FNA). Rather, FNA typically yields the diagnosis of Hürthle cell neoplasm. The definition of a neoplasm differs in the literature, with some recommending the presence of greater than 50% Hürthle cells 1, 2, while others use greater than 75% 3, 4 as the cutoff. Regardless of the percent cellularity, the presence of capsular and/or vascular invasion is required to make the diagnosis of HCC on histopathology.

Attempts have been made to identify clinical parameters that can accurately predict the malignant potential of Hürthle cell neoplasms.2 However, tumor size has been shown to be predictive of malignancy in several studies.1, 5-7 Our group previously demonstrated that the risk of malignancy in a Hürthle cell neoplasm was 55% for tumors > 4 cm and only 13% for tumors ≤ 4 cm.5 This finding is corroborated in other studies that found that between 44%8 and 65%1 of neoplasms > 4 cm were malignant. Determining the malignant potential of Hürthle cell neoplasm is important because it can change the initial surgical approach from a lobectomy to a total thyroidectomy. Similarly, determining the risk of LN metastasis can also help in operative planning. The aim of this study was to determine if tumor size correlated with LN metastasis in patients diagnosed with HCC.

We retrospectively analyzed the records of all patients who underwent a thyroid operation at the University of California, San Francisco from February 1997 to September 2008. Patients who were diagnosed with Hürthle cell carcinoma on final pathology were used for analysis. Patient demographics, preoperative imaging results, intraoperative findings, and postoperative outcome data were collected. The institutional review board at the University of California, San Francisco, approved the study.

During the study period, 39 patients were diagnosed with Hürthle cell carcinoma. The majority of patients with HCC were women and the mean age at diagnosis of all patients was 58.7 years (Table 1). The preoperative diagnosis included 31 (79%) patients with Hürthle cell neoplasm, 3 (7%) with thyroid goiter, 2 (5%) with HCC, 2 (5%) with follicular cell neoplasm and 1 (2%) with Graves' disease. Four patients had risk factors for thyroid cancer; 1 had a family history of thyroid cancer, and 3 patients had a history of radiation exposure. 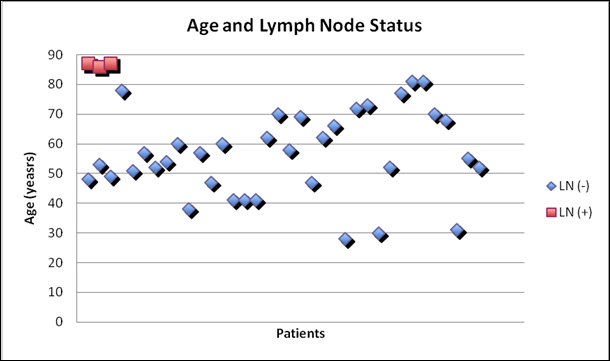 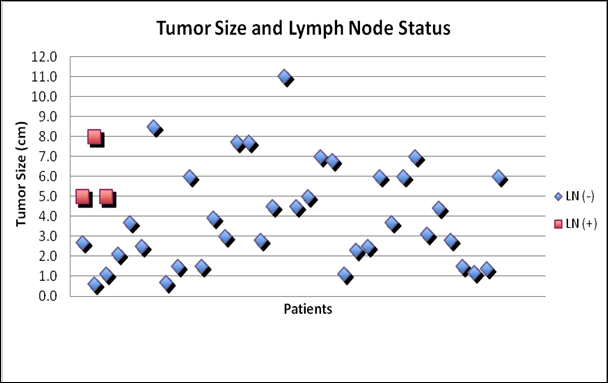 Our group previously showed that the overall rate of malignancy in FNA proven Hürthle cell neoplasms was 21% and that 55% of these tumors larger than 4cm were HCC. No single clinical factor can accurately predict the malignant potential of Hürthle cell neoplasms. However, identifying such clinical factors can guide operative decision-making. For example, it has been suggested that a total thyroidectomy, rather than a lobectomy, be considered for older patients with tumors larger than 4cm.8

This study also demonstrates that all patients with LN metastasis had widely invasive and multifocal tumors. This finding has been corroborated in another study that demonstrated that all seven patients with LN metastasis had widely invasive HCC.9 The presence of capsular invasion or vascular invasion, however, did not predict LN involvement. Though HCC commonly affects women more often than men, gender was not an associated risk factor for developing LN metastasis.

In summary, as size has been shown to predict the malignant potential of Hürthle cell neoplasms and this study demonstrate that size and age are also predictive of LN metastasis in patients with HCC. Our data suggest that consideration should be given to performing a prophylactic ipsilateral central neck dissection at the time of their initial operation in older patients with large tumors.

2. McHenry CR, Thomas SR, Slusarczyk SJ, Khiyami A. Follicular or Hürthle cell neoplasm of the thyroid: can clinical factors be used to predict carcinoma and determine extent of thyroidectomy?. Surgery. 1999;126:798-802