Dual use of a single Wilms' tumor 1 immunohistochemistry in evaluation of ovarian tumors: a preliminary study of 20 cases

This is an open access article distributed under the terms of the Creative Commons Attribution (CC BY-NC) License. See http://ivyspring.com/terms for full terms and conditions.
Citation:
Hsiao YH, Siddiqui S, Man Yg. Dual use of a single Wilms' tumor 1 immunohistochemistry in evaluation of ovarian tumors: a preliminary study of 20 cases. J Cancer 2010; 1:93-97. doi:10.7150/jca.1.93. Available from https://www.jcancer.org/v01p0093.htm

The Wilms' tumor 1 (WT-1) gene is located at chromosome 11p13, and is encoded by 10 exons, resulting in a WT-1 mRNA with a complex pattern of alternative splicing [1-5]. The WT-1 encodes a transcription factor of the zinc-finger family, which binds to GC-rich sequences and regulates the expression of several genes of the growth factor family, including the insulin-like growth factor and transforming growth factor [1-5]. The WT-1 protein is preferentially expressed in the genitourinary system and aberrant expression of the WT-1 protein has been implicated in the development of Wilms' tumors in this system [1-5]. Recent studies have further shown that aberrant expression of the WT-1 protein may also be closely associated with the development and progression of other malignancies, including mesothelioma, leukemia, and breast, esophageal, colorectal tumors [6-11]. Our own studies have consistently demonstrated that the WT-1 protein is preferentially present in breast myoepithelial and endothelial cells, and have shown that a single WT-1 immunohistochemistry can have dual use in evaluation of breast tumors [12,13].

As the human ovary is rich in blood vessels and WT-1 has been used as a biomarker for ovarian tumors [14-16], our current study attempted to test a hypothesis that WT-1 is co-expressed with a well defined ovarian tumor marker, CA125 [17-19], and also with a endothelial cell phenotypic marker, CD34, in the same cells. Therefore, a single WT-1 immunohistochemistry may have dual usages in evaluation of both the ovarian tumor cells and also the vascular density of the ovarian tissues.

Formalin-fixed, paraffin-embedded ovarian tissue blocks from 20-patients were retrieved from the files of the Armed Forces Institute of Pathology. Each of the tumors harbored normal and malignant tissue components. As the sole purpose of this study was to assess the overall expression of WT-1 in tumor and endothelial ells, the clinical profile was not collected and evaluated.

To assess the specificity of the immunostaining, different controls were used, which included: (1) the substitution of the primary antibody with the normal serum, (2) the omission of the secondary antibody, (3) and serial dilutions of the primary antibody. All the immunostainings was repeated at least twice under the same condition. Immunostained sections were independently evaluated by investigators. A cell was considered positive if distinct immunoreactivities were consistently present in its cytoplasm or nucleus in all the repeated staining processes, whereas all negative controls were completely devoid of immunoreactivities.

All negative controls were completely devoid of distinct immunoreactivities to WT-1, CA-125, and CD34. Distinct nuclear WT-1 expression was exclusively or preferentially seen in serous tumor cells, while both nuclear and/or cytoplasmic WT-1 expression was present in morphologically distinct endothelial cells in each of the cases, with weak and diffuse staining occasionally seen in some fibroblasts and white blood cells. CA-125 immunoreactivities were exclusively or preferentially seen in the surface plasma membrane of tumor cells. CD34 expression is seen mainly in the cytoplasm of endothelial cells. 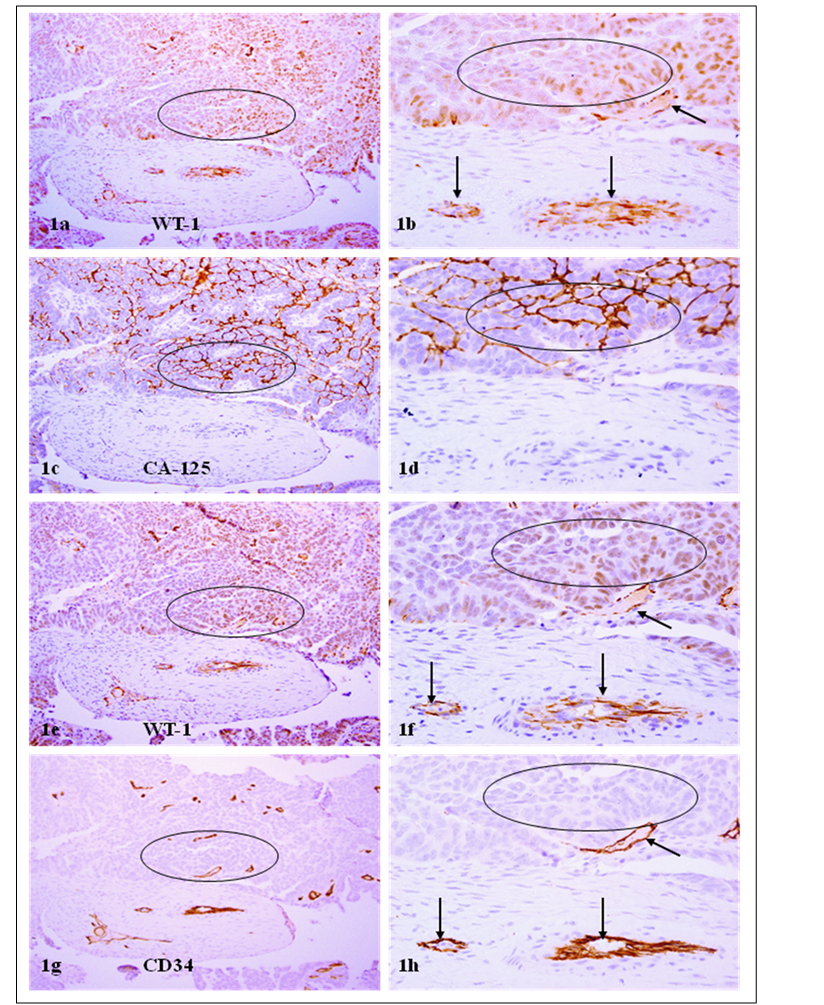 CA-125 or CD 34 positive cells co-express WT-1. A set of 4-consecutive sections were immunostained for CA-125, CD34, and WT-1. Circles identify tumor cell clusters with WT-1 and CA-125 expression. Arrows identify small blood vessels. Note that a vast majority of CA-125 or CD34 positive tumor or endothelial cells co-express WT-1, and that WT-1 expression was consistent in different sections. a, c, e, and g: 100X. b, d, f, and h: a higher (300X) magnification of a, c, e, and g, respectively. 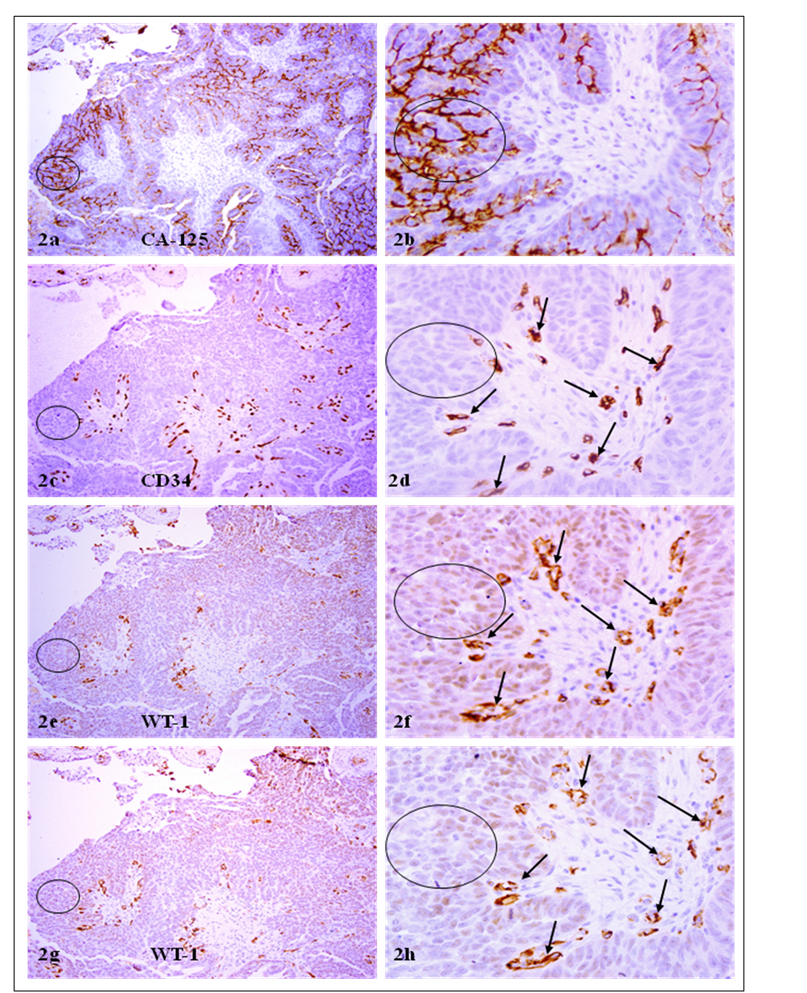 Our current study revealed that: (1) over 90% of WT-1 positive tumor cells co-expressed CA-125, (2) over 90% of WT-1 positive endothelial cells co-expressed CD34, and (3) over 90% of the CA-125 or CD34 positive cells co-expressed their counterpart molecule WT-1 in tumor and endothelial cells, respectively. Our finding of WT-1 expression in ovarian tumor cells is consistent with a number of previous studies, which have shown that WT-1 is a useful marker for elucidation of ovarian tumor cells [14-16]. Our finding of WT-1 expression in endothelial cells is in total agreement with that of our previous study in human breast tumors [13] and is also consistent with that of a recent study, which reported that “Endothelial WT-1 expression was detected in 95% of 113 tumors of different origin” [20]. Together, these findings suggest that a single WT-1 immunohistochemistry have dual usages in evaluation of both ovarian tumor cells and the vascular density. These findings also suggest that as WT-1 is heavily expressed in both tumor and endothelial cells, the development of therapeutic agents to specifically target WT-1 may provide an effective treatment option for ovarian cancer.