Succinate Dehydrogenase Subunit B (SDHB) Is Expressed in Neurofibromatosis 1-Associated Gastrointestinal Stromal Tumors (Gists): Implications for the SDHB Expression Based Classification of Gists

Gastrointestinal Stromal Tumor (GIST) is the most common mesenchymal tumor of the digestive tract. GISTs develop with relatively high incidence in patients with Neurofibromatosis-1 syndrome (NF1). Mutational activation of KIT or PDGFRA is believed to be a driving force in the pathogenesis of familial and sporadic GISTs. Unlike those tumors, NF1-associated GISTs do not have KIT or PGDFRA mutations. Similarly, no mutational activation of KIT or PDGFRA has been identified in pediatric GISTs and in GISTs associated with Carney Triad and Carney-Stratakis Syndrome. KIT and PDGFRA-wild type tumors are expected to have lesser response to imatinib treatment. Recently, Carney Triad and Carney-Stratakis Syndrome -associated GISTs and pediatric GISTs have been shown to have a loss of expression of succinate dehydrogenase subunit B (SDHB), a Krebs cycle/electron transport chain interface protein. It was proposed that GISTs can be divided into SDHB- positive (type 1), and SDHB-negative (type 2) tumors because of similarities in clinical features and response to imatinib treatment. In this study, SDHB expression was examined immunohistochemically in 22 well-characterized NF1-associated GISTs. All analyzed tumors expressed SDHB. Based on SDHB-expression status, NF1-associated GISTs belong to type 1 category; however, similarly to SDHB type 2 tumors, they do not respond well to imatinib treatment. Therefore, a simple categorization of GISTs into SDHB-positive and-negative seems to be incomplete. A classification based on both SDHB expression status and KIT and PDGFRA mutation status characterize GISTs more accurately and allow subdivision of SDHB-positive tumors into different clinico-genetic categories.

Neurofibromatosis-1 (NF1), also known as von Recklinghausen disease, is an inherited, autosomal dominant disease phenotypically characterized by multiple café au lait spots, Lisch nodules, freckling, and development of neurofibromas, and in some cases, their malignant derivatives [1]. Also, gastrointestinal stromal tumors (GISTs) arise in NF1 patients 150 times more frequently than in the general population [2]. With an estimated birth incidence of 1:3000 in Western countries, NF1 is the most commonly inherited disease [1]. It was postulated that NF1 is caused by a loss-of-function of tumor suppressor gene leading to the inactivation of neurofibromin that regulates cell proliferation and cell differentiation through inhibitory regulation of the ras oncogene, a GTPase [3-7].

Gastrointestinal stromal tumor (GIST) is the most common mesenchymal neoplasm of the gastrointestinal tract. GISTs are believed to originate from the interstitial cells of Cajal, pacemaker cells that regulate peristalsis in the digestive tract [8]. An oncogenic (mutational) activation of KIT or PDGFRA tyrosine kinases has been identified in a great majority of GISTs [9]. However, no GIST-specific KIT or PDGFRA mutations were identified in GIST associated with NF1, Carney Triad (CT), Carney-Stratakis Syndrome (CSS), in pediatric GISTs, or in a small subset (<10%) of sporadic adult GISTs [10-14]. Molecular mechanisms underlying the development of KIT/PDGFRA-wild type (WT) GISTs are not well understood.

Recently, GISTs associated with CT (triad of gastric GIST, pulmonary chondroma, and extra-adrenal paraganglioma) and CSS (hereditary GIST paraganglioma syndrome) have been shown to have a loss of succinate dehydrogenase subunit B (SDHB) expression [15, 16]. SDHB, a mitochondrial protein, is one of the ubiquitously expressed proteins functioning at the interface of tricarboxylic acid cycle and electron transport chain. It is believed that loss of SDHB expression leads to a tumorigennic mechanism involving the stabilization of Hypoxia Inducing Factors (HIF), which in turn upregulates genes that promote adaptation of cells in low-oxygen environments by inducing angiogenesis and glycolysis [17-20].

A total of 23 NF1-associated GISTs, from years 1970-1999, were obtained from the Armed Forces Institute of Pathology (AFIP) tissue repository.

All twenty two NF1-associated GISTs exhibited granular, cytoplasmic staining for SDHB (Fig. 1). In the analyzed cohort, there were 8 (36.4%) male and 14 (63.6%) female patients. Median age at tumor diagnosis was 41 years (mean, 46 years). Twenty one tumors were located in the small intestine and one in colon. Tumor sizes varied from 0.9 to 10 cm (median, 3.5 cm), and 15 patients presented with multiple tumors. Most of these GISTs had mitotic counts <5 per 50 HPFs, and only two tumors contained more than 5 mitoses per 50 HPFs. KIT and DOG 1/Anoctamin-1 were expressed in all tumors. GIST-specific KIT exon 9, 11, 13, and 17, and PDGFRA exon 12, 14, and 18 mutations were not found as previously reported [11].

In this study, we demonstrate consistent SDHB expression in neurofibromatosis 1 (NF1)-associated GISTs. Clinicopathologic features of these GISTs include patient female predominance, small intestinal location, common multiplicity, KIT and DOG 1 expression, and lack of GIST-specific KIT and PDGFRA mutations, as previously reported [10, 11]. Lack of GIST-specific KIT and PDGFRA mutations has also been reported in pediatric GISTs, Carney triad (CT) and Carney-Stratakis (CS) syndrome-associated GISTs, and in a small subset of adult GISTs [10-14].

Lack of SDHB expression has been reported in Carney triad (CT) and Carney-Stratakis (CS) syndrome-associated GISTs and more recently in pediatric and adult sporadic GISTs showing morphologic and clinical features similar to CT- and CS-GISTs. It has been proposed that based on SDHB expression, GISTs could be divided into 2 distinctive subtypes: SDHB- positive (type 1) and SDHB-negative (type 2) tumors [15]. Type 1 GISTs can occur in adults anywhere in the gastrointestinal tract, have equal sex distribution, generally have KIT or PDGFRA mutations, and, in majority, respond to imatinib treatment. Type 2 GISTs occur in childhood or young adulthood nearly exclusively in the stomach, show a striking predilection for the female sex and epitheliod morphology. These tumors lack KIT or PDGFRA mutations and show a limited response to imatinb inhibition [14].

Based on SDHB-expression status, NF1-associated GISTs belong to type 1 category. However, they differ from type 1 GIST characteristics by restriction of occurrence to intestines, common tumor multiplicity, female predominance, and consistent lack of GIST-specific KIT and PDGRA mutations. Similar to SDHB type 2 tumors, they do not respond well to imatinib treatment [21-23]. Therefore, clinicopathologically NF1-associated GISTs deserve a separation from other type 1 (SDHB-positive) GISTs.

Although imatinib mesylate, KIT and PDGFRA tyrosine kinase inhibitor was successfully used for treatment of advanced and disseminated GISTs [24], such a treatment is ineffective or minimally effective in KIT/PDGFRA-wild type GISTs, as well as those with certain mutations, such as PDGFRA Asp842Val substitution [25]. Thus, genotyping of GISTs is considered a standard clinical test in all disseminated GISTs and tumors with a substantial risk of developing metastatic disease.

In conclusion, NF1-associated GISTs express SDHB, similar to a majority of adult GISTs. In view of different KIT/PDGFRA mutation status and prospect to targeted treatment, simple categorization of GISTs into type 1 and type 2 based on SDHB expression is inadequate. A classification based on both SDHB expression status and other clinicopatholopgic factors: KIT/PDGFRA mutation and NF1 syndrome status characterize GISTs more accurately allowing subdivision of SDHB-positive tumors into different categories based on these clinicopathologic factors (Table 1). 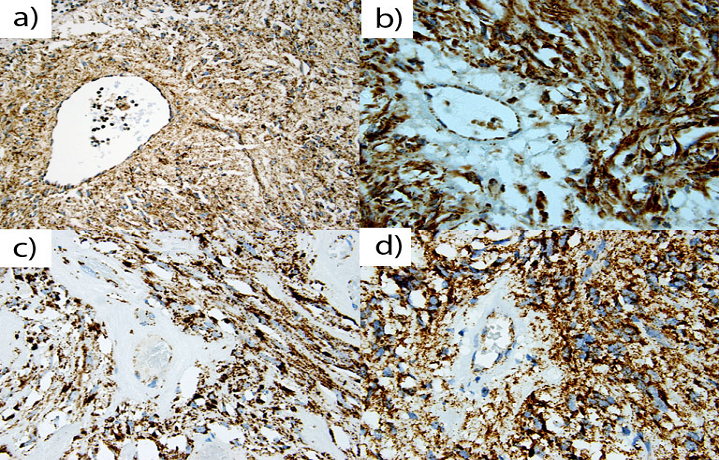 Classification of GISTs based on SDHB expression and KIT or PDGFRA mutation status.

12. Miettinen M, Lasota J, Sobin LH. Gastrointestinal stromal tumors (GISTs) of the stomach in children and young adults: a linicopathologic, immunohistochemical and molecular genetic study of 44 cases with long term follow-up and review of the literature. Am J Surg Pathol. 2005;29:1373-1381

14. Pasini B, McWhinney SR, Bei Th, at al. Clinical and molecular genetics of patients with the Carney-Stratakis syndrome and germline mutations of the genes coding for the succinate dehydrogenase subunits SDHB, SDHC, and SDHD. Eur J Hum Genet. 2008;16:79-88