Primary adenocarcinoma of the vermiform appendix is a rare entity and is frequently discovered by the pathologist following appendectomy for suspected appendicitis.

Primary adenocarcinoma of the vermiform appendix is a rare entity and is frequently discovered by the pathologist following appendectomy for suspected appendicitis. Neoplasms of the appendix are found in 1% of all appendectomy specimen with a frequency of appendiceal adenocarcinoma in 0,1% of the specimen investigated. The incidence of that type of neoplasm varies from 0,01 to 0,2 per 100.000 persons per year [1] and it constitutes less than 0,5 % of all gastrointestinal malignant neoplasms [2, 3, 4].

We present a 42 year old male with mucinous adenocarcinoma of the appendix who initially presented with typical symptoms of acute appendicitis. Furthermore the patient reported recurrent peranal loss of blood, which was suspected to be associated with a history of colitis ulcerosa, known since 1997 and continuously treated by NSAID.

The patient was treated by an uncomplicated laparoscopic appendectomy. The histopathological examination of the specimen surprisingly revealed a pT4a (local infiltration of the visceral peritoneum) mucinous adenocarcinoma of the appendix (figure 1) with positive resection margins (R1 resection). Staging examinations including colonoscopy, gastroscopy, thoracical x-ray and abdominal ultrasound were normal. Therefore, right hemicolectomy according to the principals of oncologic surgery was performed. The final histopathological classification described a pT4a, pN2 (6/15), L1, V0, M0, G3, R0 tumor, corresponding to UICC IIIC classification. 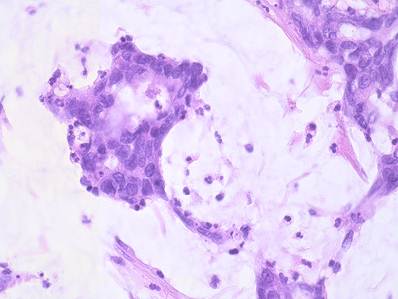 Because of the young age of the patient hereditary cancer syndrome was considered, although the family tumor history was negative for gastrointestinal tumors or other malignancies.

Due to the histopathological classification intensified adjuvant chemotherapy according to the FOLFOX 4 scheme was started five weeks after surgery. Currently after 24 month of follow up the patient is without detectable tumor recurrence, as shown by abdominal MR imaging, colonoscopy and ultrasound examination. 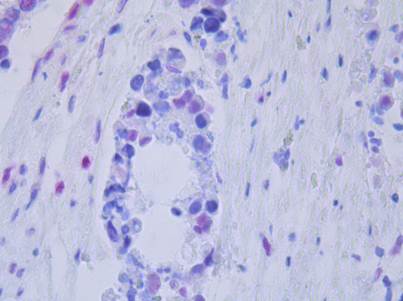 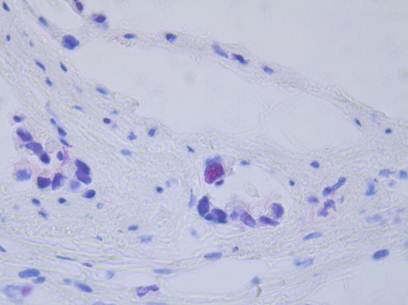 Primary adenocarcinoma of the appendix is a rare neoplasm detected in less than 0.5 % of all neoplasms of gastrointestinal origin. Carcinomas of the appendix are usually classified according to histopathological examination into four distinct subtypes with varying frequencies: colonic type adenocarcinoma, mucinous adenocarcinoma, signet ring type adenocarcinoma and others. In a group of 1095 patients with primary appendiceal adenocarcinoma McCusker et al. [6] found 56,0% of tumors classified as mucinous appendix carcinoma, 37,6% were belonging to the colonic and 6,4 % to the signet ring cell subtype. The five year survival rate for all patients was 54.4 % and was associated with the stage of disease, the grading and the histological subtype. In a group of 94 patients Nitecki et al. [7] found a survival of 100% for patients with tumors classified as Dukes A, 67% for Dukes B, 50% for Dukes C and 6% for Dukes D carcinomas. The data presented in the literature concerning the prognosis according to the different histological subtypes is not yet conclusive. McCusker et al. [6] reported 5-year survival rates of 44% for tumors with the mucinous subtype, 52% for the colonic subtype and 20% for the signet ring cell subtype. Other authors report that the mucinous histology is the best prognostic factor [3, 7, 8]. The general prognosis seems to be close to that reported for colonic cancers [6, 7, 9].

While simple appendectomy seems to be sufficient for pT1 carcinoma of the appendix most tumors present as advanced invasive carcinomas and secondary right hemicolectomy is usually recommended as the operative treatment of choice [8]. Malignant infiltration of locoregional lymph nodes has to be expected in about on third of the patients and especially in advanced invasive tumors. Adjuvant chemotherapy is therefore recommended in these patients with lymph node positive or locally advanced tumors in accordance with the recommendation for colon cancer. However, frequently carcinomas of the appendix show local infiltration in the surrounding peritoneum with increased risk of locoregional recurrence. For these patients with peritoneal tumor infiltration or peritoneal metastasis cytoreductive surgery in combination with hyperthermic chemotherapy might be an additional therapeutic option [10].

Studies investigating the tumorbiologic alterations of carcinomas of the appendix have so far reported classic mutations associated with sporadic colorectal cancer including frequent K-ras mutations, rare p53 protein overexpression and all tumors investigated so far were microsatellite stable [5]. Therefore, the mucinous appendix carcinoma with high grade microsatellite instability, first described in our report, seems to represent a distinct tumor etiology and might describe a yet unidentified alteration in the DNA repair pathway with possible implications for chemotherapeutic modifications during adjuvant chemotherapy. Microsatellite instabilities are found in tumors associated with genetic defects in DNA mismatch repair, but they are also found in 10 - 20% of sporadic advanced colon carcinomas mainly caused by DNA hypermethylation leading to defects in DNA mismatch repair. Lanza et al. [11] detected a loss of expression of MLH1- or MSH2-genes in 90,9% of MSI-H colon carcinomas, whereas all MSI-L (low instability) and MSS (stable) tumors showed normal expression of both proteins [12]. There is a considerable number of obviously HNPCC associated tumors in which a gene defect cannot be found. Genomic rearrangements, not detectable by PCR or sequencing, were found in a considerable proportion of HNPCC families without point mutations [13]. Grabowski et al. [14] found in their series of 64 patients without detectable point mutations in 17% pathogenic alterations in MLH1 and MSH2 genes caused by deletions. As our patient showed lack of protein expression of two mismatch repair genes, microsatellite instability and furthermore fulfilled the revised Bethesda Criteria, a yet unidentified genetic defect, associated with defects in mismatch repair might represent a cofactor for the development of the described mucinous appendiceal carcinoma.

Therefore, our patient received intensified adjuvant chemotherapy according to FOLFOX-4 scheme in accordance to the treatment of advanced colon cancer.

The patient reported shows the very rare entity of a mucinous adenocarcinoma of the appendix with high grade microsatellite instability, not yet reported in the literature before. Therefore, tumorbiologic alterations with so far unidentified alterations of the DNA mismatch repair pathway leading to reduced expression of DNA repair proteins and microsatellite instability might be associated with mucinous adenocarcinomas of the appendix. Following 5-FU based adjuvant chemotherapy relevant variability in antitumor response of MSI-H tumors and therefore, intensified chemotherapy protocols will have to be considered in these usually young patients.