Top
Background
Evidence for CDCT at relapse
Evidence for HDCT at relapse
Retrospective prognostic factor...
Prospective Randomised Trials in...
Lack of consensus on the...
Details of the regimens
Summary of inclusion criteria of...
Statistical considerations of...
Summary
References

Metastatic germ cell tumours (GCTs) are usually cured with cisplatin based chemotherapy and standard treatment algorithms are established. However when this treatment fails and the disease relapses, standard treatment is much more uncertain. Both conventional dose therapy (CDT) and high dose therapy (HDT) are widely used, due to the lack of conclusive data supporting one specific approach. A recent retrospective analysis focusing on this population suggested a significant benefit for HDT. Retrospective analyses are prone to bias, and therefore while this data is provocative it is by no mean conclusive. For this reason the international community is supporting a prospective randomised trial in this area comparing CDT(TIP) with sequential HDT (TICE). The planned open labelled randomised phase III study (TIGER) is due to open in 2011 and will recruit 390 patients to detect a 13% difference in 2 year progression free survival (primary endpoint). It is hoped that this large study will conclusively resolve the uncertainty which currently exists.

Testicular cancers or germ cell tumours (GCT) represent the most common malignancy affecting adolescent and young adult men in Europe and the United States. The peak incidence at approximately 17/100,000 occurs in the 25-34 age group. Therefore GCTs account for the greatest average number of years of life lost of any adolescent or adult malignancy [1].

Conventional-dose chemotherapy (CDCT) and high-dose chemotherapy (HDCT) are both used as salvage treatment strategies for patients with metastatic GCTs who experience progression with or after first-line treatment [3,4]. At recent international consensus meetings (G3 testis meeting: ASCO 2010) investigators agreed that identifying the optimal initial salvage approach (CDT vs HDT) is the most pressing question remaining in GCTs.

Evidence for CDCT at relapse

A number of CDCT regimens based on ifosfamide & cisplatin plus vinblastine (VeIP), etoposide (IPE or VIP) or paclitaxel (TIP) have been used over the last 2 decades [3,5]. When considering all relapsed or refractory patients, complete response (CR) rates of around 50-60% and 2 year PFS of 20-35% have been seen [3]. TIP has arguably become the most widely accepted CDT regimen over the last 5 years. It consists of 4 cycles of paclitaxel ifosfamide and cisplatin therapy given in 3 weekly intervals with G-CSF support. Single arm phase II data supports its use is this setting with 2 year PFS figures of approximately 30% [5].

Evidence for HDCT at relapse

GCTs are an ideal model for the study of intensive HDCT. This is because it is associated with a high response rate to chemotherapy, bone marrow involvement is extremely rare, patients are young and tolerate intensive therapy well, the dose-limiting toxicity of known active agents is myelosuppression and a dose response relationship has been suggested for two such agents (carboplatin and etoposide) [4]. Investigators have therefore used HDCT in an attempt to improve outcomes in this setting.

The most robust single institution data comes from Indiana University: 184 consecutive metastatic testicular cancer patients were treated with 2 cycles (n=173) or 1 cycle (n=11) of high-dose etoposide & carboplatin [6]. During a median follow-up of 48 months, 63% of patients achieved a durable remission and 5 year OS was approximately 65%11. This trial excluded some unfavorable groups of patients such as those with extragonadal primary tumor sites and late relapses.

The TI-CE high-dose regimen was developed more recently with the goal of targeting patients with an unfavourable prognosis with CDT [7]. TI-CE consists of an initial 2 cycles of rapidly recycled paclitaxel and ifosfamide followed by stem cell collection. The high dose component of this therapy consists of 3 cycles of carboplatin and etoposide, each supported with stem cell infusion (figure 1). In a phase II study consisting of 107 patients, complete response rates were high and the 5 year disease free survival was 47% with an overall survival of 52%. The regimen has good stem cell mobilisation rates (7/107 patients failed to receive any HDCT compared with 13/108 in previous studies with other regimens [2].

To test the benefit of HDT in comparison CDT 2 retrospective comparisons have been made. In 2002, Beyer et al conducted a retrospective analysis on 55 matched pairs of pts receiving HDT or CDT [8]. Hazard ratios (HR) favouring HDCT of between 0.72 & 0.84 for event free survival & between 0.77 & 0.83 for OS (depending on the type of analysis) were reported

Recently the International Prognostic Factors Study Group have reported retrospective data on 1,594 patients with GCTs treated in the initial salvage setting [9,10]. All patients had experienced progression after at least 3 and no more than 6 cisplatin-based chemotherapy cycles. These patients were treated with either cisplatin-based CDT (n=773) or carboplatin-based HDT (n=821). Data was collected from 38 centres worldwide. In this non-randomised comparison, the HR for PFS was 0.44 (95% CI, 0.39 to 0.51) stratified by prognostic category, and for OS was 0.65 (95% CI, 0.56 to 0.75), favouring HDT. Results were consistent within each prognostic category except among low-risk patients, for whom similar overall survival was observed between the two.

Any potential benefit of HDT over CDT should be confirmed in a randomized trial. Only one such trial has been undertaken organised by European investigators led by French GCT group (GETUG) and the European Bone Marrow transplant (NCT00002566) [11]. This study randomised 280 GCT patients who had progressed after first-line chemotherapy to 4 cycles of CDCT or 3 cycles of the same regimen followed by a single cycle of HDCT (carboplatin, etoposide, & cyclophosphamide), followed by autologous bone marrow and/or peripheral blood stem cell transplantation. With 45 months median follow-up, no statistically significant differences were seen in terms of event-free survival or overall survival. There were criticisms of the trial methodology: only 98/140 patients randomised to HDCT actually received it and there was a higher than expected rate of treatment mortality (3% for CDT v 7% for HDT). Finally a single cycle rather than sequential cycles of HDCT were given. Therefore many believe that the trial did not definitively settle the HDCT vs. CDCT question resulting in widespread use of HCT.

Lack of consensus on the treatment of relapsed GCTs?

The conflict between retrospective and randomised data has led to significant heterogeneity of initial salvage treatment approaches on the local, regional and national levels. The recent retrospective analysis of 1594 patients with relapsed disease demonstrated the international uncertainty about the optimal initial salvage treatment approach, with 52% being treated with CDT and 48% receiving HDT [10]. Therefore when this data was presented at ASCO 2010, the international GCT community met and decided a prospective study comparing CDT and HDT was the most presenting question in GCTs. The TIGER (RANDOMIZED PHASE III TRIAL OF INITIAL SALVAGE CHEMOTHERAPY FOR PATIENTS WITH GERM CELL TUMORS) trial (PI: Darren Feldman [MSKCC]; Co-PI: Robert Huddart [Royal Marsden] and Thomas Powles (Barts cancer Institute) has been specifically designed to address this issue in a prospective manner using the most recent and relevant chemotherapy regimens (TIP and TI-CE). The trial will be an international collaboration among many centres across North America (United States and Canada), Europe (UK, Germany, France, Italy, Spain, Denmark) and Australia. 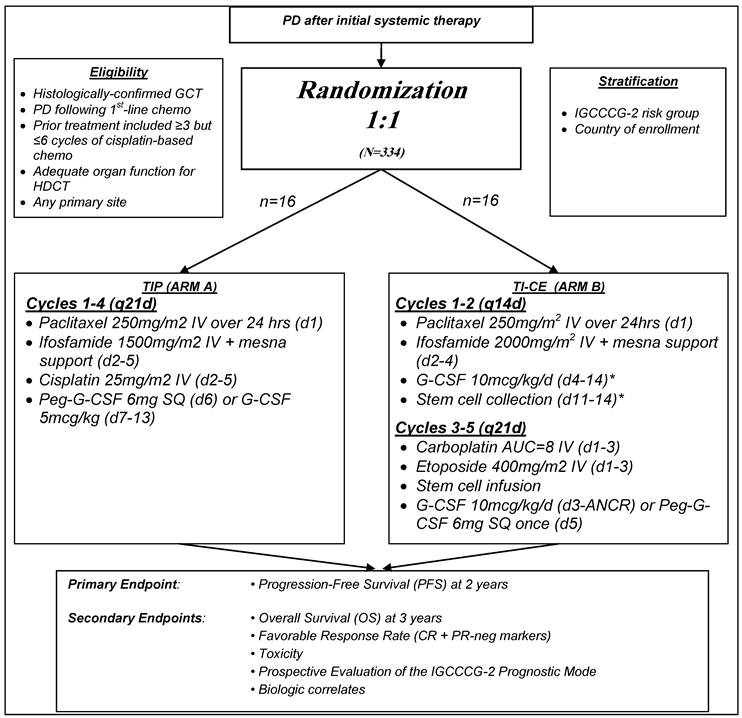 Details of the regimens

Men over the age of 16 with confirmed GCT histology will be included in the study. Patients will require unequivocal progression of measurable disease after a minimum of 3 and no more than 6 cisplatin-based chemotherapy cycles, administered as part of first-line (initial) chemotherapy.

Statistical considerations of the TIGER trial

The primary endpoint is 2 year progression free survival. With 390 patients (248 PFS events) there will be 80% power to detect a 13% difference in 2 year PFS assuming the 2 year PFS in the control arm (TIP) is 30%. There will also be 54% to 71% power to detect a difference of 12% in 3 year overall survival, the most important secondary endpoint of the trial. This value will depend on the 3 year overall survival of TIP-treated patients, which is estimated to be 50% based on the values from the IT94 CDCT arm & the large retrospective observational study [5,10].

The treatment for relapsed GCTs is an area of equipoise. Both CDCT and HDCT are widely used and current data potentially supports both approaches. The GCT community is therefore investigating this issue as part of a randomised phase III study comparing TIP and TI-CE.