This is an open access article distributed under the terms of the Creative Commons Attribution (CC BY-NC) License. See http://ivyspring.com/terms for full terms and conditions.
Citation:
Zheng M, Jones DM, Horzempa C, Prasad A, McKeown-Longo PJ. The First Type III Domain of Fibronectin is Associated with the Expression of Cytokines within the Lung Tumor Microenvironment. J Cancer 2011; 2:478-483. doi:10.7150/jca.2.478. Available from https://www.jcancer.org/v02p0478.htm

Recent studies have pointed to changes in tissue mechanics as a contributory element to the development of malignancies. Increased tissue rigidity is associated with the unfolding of the Type III domains of fibronectin within the extracellular matrix. The consequences of this unfolding on cellular functions within the lung are not well understood. In the present study, we evaluated the effect of a peptide representing a partially unfolded intermediate of the first Type III repeat of fibronectin (FnIII-1c) on inflammatory gene expression in adult human lung fibroblast cells. FnIII-1c induced expression of cytokines, CXCL1-3, IL-8 and TNF-α, by lung fibroblast cells. The increase in IL-8 expression was dependent on Toll-like receptor 2 and NFκB. Immunohistochemistry of tissue arrays representing squamous cell carcinoma of the lung revealed extensive stromal staining for IL-8 and fibronectin fibrils which were co-aligned with myofibroblasts. These data suggest a model in which unfolding of FnIII domains secondary to myofibroblast-generated tension may induce the release of cytokines by stromal fibroblasts present within the lung tumor.

Lung cancer is the leading cause of cancer-related death with a world-wide annual death rate of 1.3 million people (1). In spite of developments in surgical techniques, chemotherapy and radiation oncology, the overall 5 year survival rate (15%) has remained unchanged for decades. Inflammation mediated destruction of the extracellular matrix, such as that which occurs in chronic obstructive pulmonary disease (COPD), asthma, tuberculosis and emphysema, is associated with increased risk of lung cancer (2-4). The association between lung inflammatory disease and lung cancer has been recognized for several decades, however, the mechanisms underlying their linkage are not understood. Recent studies have suggested that chronic inflammation and extracellular matrix remodeling may provide a mechanistic link between COPD and the development of lung cancer (2).

Increased deposition of plasma fibronectin into the lung extracellular matrix is seen in lung cancer and has been implicated in promoting tumor cell proliferation, invasion and resistance to chemotherapy (5-10). Changes in the mechanical properties of lung tissue are seen in a number of disease states including cancer, COPD, asthma and emphysema, where changes in the remodeling and stiffening of the extracellular matrix accompany disease progression. A recent study of lung fibrosis in bleomycin treated mice, has shown that early fibrotic lesions in the lung are associated with large (as much as 30 fold) changes in the lung tissue stiffness. These large increases in tissue rigidity occur in focal areas in association with extracellular matrix remodeling and infiltration of myofibroblasts (11). The role of tissue stiffening in the initiation and progression of lung cancer has not been studied, but studies on breast cancer show that increased tissue stiffening is positively correlated with disease progression (12).

The secondary structure of the fibronectin molecule is organized into individually folded domains termed Types I, II and III. The Type III domains are folded into structurally stable beta-pleated sheets which unfold and refold in response to changes in intracellular tension. The biological role of many of these domains is not well understood, but accumulating evidence has indicated that the Type III domains of fibronectin present within the matrix become unfolded as the matrix becomes more rigid (13).

Steered molecular dynamics has been used to predict stable intermediate structures of partially unfolded fibronectin Type III domains. One such intermediate is recapitulated in a peptide comprised of the C-terminal two-thirds of the first FnIII domain, FnIII-1c (14). In the present study, we show that addition of FnIII-1c to adult lung fibroblasts causes a large increase in the expression of inflammatory cytokines including CXCL1-3 and IL-8. Staining of tissue microarrays of squamous cell carcinoma shows extensive myofibroblast infiltration into a fibronectin rich stroma coupled with increased expression of IL-8. Our studies are consistent with a model in which myofibroblast driven unfolding of the secondary structure of matrix fibronectin plays a role in the initiation and/or maintenance of chronic inflammation within the tumor microenvironment.

To determine the effect of FnIII domain unfolding on gene expression, we incubated human adult lung fibroblast cells with the FnIII-1c peptide. This peptide recapitulates a stable intermediate structure which is formed when fibronectin undergoes unfolding in response to cellular force (14). After 2 hours of incubation with FnIII-1c, RNA was extracted from cells and gene expression was analyzed by microarray. As shown in Fig. 1A, several genes were upregulated in response to FnIII-1c and the five most highly upregulated genes (CXCL-1,2,3, IL-8 and TNF-α) are shown in Fig. 1B. IL-8, which exhibited over a 100 fold increase in expression in response to FnIII-1c was chosen for further characterization. The microarray results for IL-8 were confirmed by ELISA, which demonstrated a dose-dependent increase in the amount of IL-8 protein present in the conditioned medium of lung fibroblasts treated with FnIII-1c. The FnIII-13 domain served as control and had no effect on IL-8 expression (Fig. 1C).

Expression of inflammatory cytokines is often under the control of the transcription factor, NFκB, which is translocated to the nucleus following activation. To determine whether FnIII-1c activated NFκB, nuclear lysates were prepared from lung fibroblasts treated with increasing doses of FnIII-1c. Western blot analysis of lysates indicated that within an hour of FnIII-1c treatment, there was a dose dependent increase in the accumulation of the p65/relA subunit of NFκB in the nucleus (Fig. 2A). To verify a role for NFkB in the induction of IL-8, cells were pretreated with two different inhibitors of NFκB activation, PS-1178 and BAY11-7072. Incubation of cells with FnIII-1c resulted in a large increase in the amount of IL-8 present in the conditioned medium when compared with the control, FnIII-13 (Fig. 2B). In the presence of either inhibitor, FnIII-1c induction of IL-8 was decreased by 85%, confirming a role for NFkB in the induction of IL-8 by FnIII-1c. Activation of NFκB can be regulated by the Toll-like family of receptors (TLRs), transmembrane receptors which regulate the innate immune system. To evaluate a role for TLRs in the induction of IL-8, cells were incubated with FnIII-1c in the presence of blocking antibody to either TLR2 or TLR4. Blocking antibody to TLR2 inhibited IL-8 expression in response to FnIII-1c (Fig. 2C). Neither control antibodies nor blocking antibody to TLR4 inhibited IL-8 secretion in response to FnIII-1c. Taken together, these experiments indicate that the induction of IL-8 expression in lung fibroblasts by FnIII-1c occurs through the TLR2 dependent activation of NFκB.

FnIII-1c induces TLR2-dependent expression of IL-8 in human adult lung fibroblasts. (A) Human adult lung fibroblasts were incubated with the indicated concentrations of FnIII-1c with PBS for 1 hr. The nuclear fraction was isolated and analyzed by immunoblotting for the presence of the NFκB protein, p65/rel A. Nuclear lamin A/C served as a loading control. (B) Cell were pretreated for 2 hrs with inhibitors of NFκB signaling, 10 μM of BAY11-7082 or 10 μM of PS-1145. Cell then received 10 μM FnIII-1c for FnIII-13 for an additional 4 hrs. Conditioned medium from cells was collected and IL-8 was measured by ELISA. (C) Cells were pretreated with blocking antibodies to human TLR2, TLR4, or control IgG for 1 hr prior to the addition of 10 μM FnIII-1c for 4 hrs. IL-8 present in the conditioned medium was analyzed by ELISA. Positive control was set as 100%. Error bars represent mean ± SD. 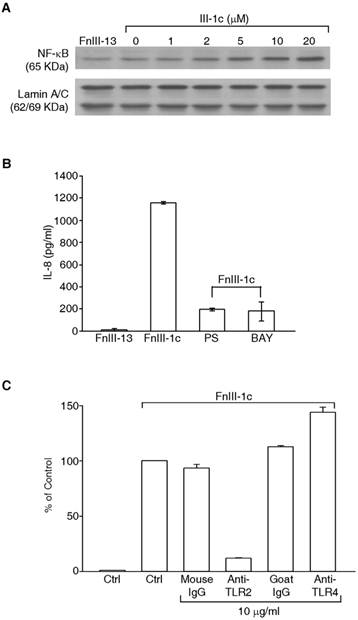 Figure 3B shows sequential sections of a squamous cell carcinoma of the lung which have been stained for either smooth muscle cell actin (panel a) or IL-8 (panel b). The tumor stroma (stroma) stained heavily for smooth muscle actin and the staining pattern appeared fibrillar, similar to that seen with fibronectin (Fig. 3A), indicating that the fibroblasts aligned along the fibronectin fibrils are myofibroblasts. IL-8 staining was present in both the stroma and the carcinoma regions of the tumor (panel b). Control staining was negative (panel c). These data indicate that in squamous cell carcinoma both fibronectin and IL-8 are heavily expressed in the tumor stroma and that the increased fibronectin within the tumor stroma is associated with an influx of myofibroblasts which are aligned along fibronectin fibers. These data are consistent with a model in which myofibroblast contractility dependent remodeling of fibronectin matrix initiates the release of inflammatory cytokines within the lung tumor microenvironment.

Chronic inflammation and fibrotic disease are believed to be contributing factors in the progression of lung cancer in high-risk patients (2,3). Our data are consistent with a model in which changes in the secondary structure of matrix fibronectin driven by increased rigidity of lung tissue is part of a feed forward mechanism controlling the release of inflammatory mediators into the lung microenvironment. The cytokines released in response to FnIII-1c, IL-8, CXCL1, 2, and 3, are CXCR2 ligands which promote both inflammation and angiogenesis through the recruitment of inflammatory cells and the mobilization of bone marrow endothelial cells (17,18). Our data suggest that unfolding of the FnIII-1 domain within fibronectin present in the tumor stroma promotes tumor progression through the release of cytokines from resident lung fibroblasts.

The FnIII-1c peptide used in this study was originally called anastellin and shown to have anti-angiogenic and anti-tumor properties (19). We subsequently showed that FnIII-1c had inhibitory effects on signaling pathways regulating endothelial microvessel cell proliferation (20,21). In contrast, when incubated with fibroblast cells, FnIII-1c had little effect on growth and instead activated signaling pathways leading to the release of cytokines, which are known to be proangiogenic (20,22). These data suggest that the FnIII-1 domain of fibronectin may have both pro- and anti-angiogenic roles within the tumor microenvironment. 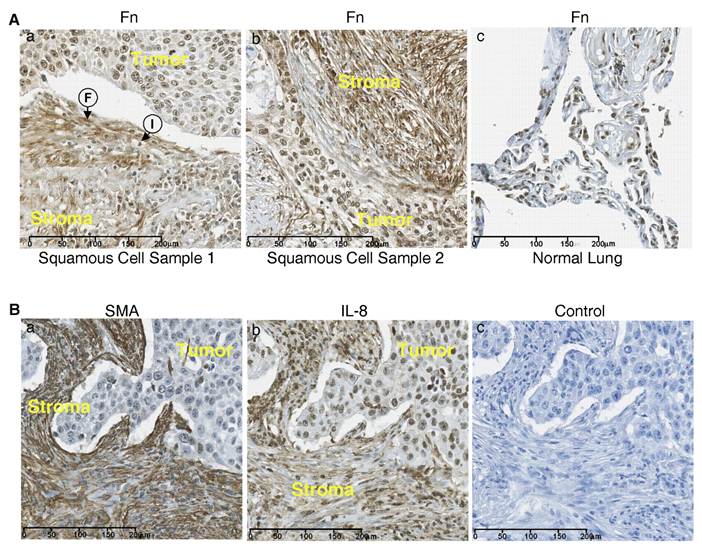 Although the function of TLRs in the regulation of inflammation in response to bacterial pathogens has been recognized for many years, more recent studies have pointed to a role of TLRs in mediating non-septic inflammatory responses. It is now becoming clear that TLRs may play a role in the initiation and/or maintenance of inflammatory processes during organ dysfunction and tissue injury, thereby contributing to chronic illness. Both TLR2 and TLR4 are expressed in resident lung cells and both TLR2 and TLR4 have been reported to be activated through endogenous molecules including fragments of matrix proteins, such as hyaluronic acid (HA), the EDA domain of fibronectin (FnEDA) as well as heat shock proteins and β-amyloid (23,24). Accumulating evidence indicates that TLR signaling is exceedingly complex and the elicited immune response is both ligand- and cell-type specific (25).

We have shown in a previous study, that addition of Fn III-1c to human dermal fibroblasts results in the NFkB dependent release of inflammatory mediators, including IL-8 (22). In dermal fibroblasts, induction of cytokine expression was dependent on TLR4 rather than TLR2. The basis for the involvement of distinct TLR receptors in the two cell types is not known. The ability of FnIII-1c to signal through either TLR2 or TLR4 suggests that FNnIII-1c does not bind directly to TLRs to initiate signaling, but instead interacts with TLR signaling complexes by means of a co-receptor or ancillary binding protein.

The assembly of TLR containing signaling complexes which differentially function to regulate unique patterns of cytokine expression suggests that it may be possible to selectively target arms of TLR signaling pathways to treat disease without sacrificing pathways controlling host-defense. Our data suggest that force-dependent remodeling of the fibronectin matrix promotes inflammation with the lung. The identification of mechanically sensitive response elements within the fibronectin matrix, and their associated signaling pathways will provide novel targets for the treatment of chronic lung inflammation and may also represent a unique opportunity for developing therapies directed at early stage intervention in that population (i.e., former smokers, patients with COPD) who are at high risk for the development of lung cancer.