Purpose: Age is a poor prognostic factor in melanoma patients. Elderly melanoma patients have a different presentation and clinical course than younger patients. We evaluated the impact of age ≥70 years (yrs) on the diagnosis and natural history of melanoma.

Methods: Retrospective review of 610 patients with malignant melanoma entered into a prospective sentinel lymph node (SLN) database, treated from June 1997 to June 2010. Disease characteristics and clinical outcomes were compared between patients ≥70 yrs vs. <70 yrs of age.

Conclusions: Elderly (≥70 yrs) melanoma patients present with thicker melanomas and a higher mitotic rate but have fewer SLN metastases. Melanoma in the elderly is more common on the head and neck. Higher incidence of local/in-transit metastases is seen among the elderly. Five-year disease-specific mortality and overall mortality are both worse for these patients.

The incidence of malignant melanoma has been increasing over the last several decades. Melanoma is the sixth most common malignancy in the United States; there were an estimated 68,120 new cases of invasive melanoma in 2010 with 8,700 deaths due to the disease 1, 2. When compared to younger age groups, mortality is significantly higher in the elderly implicating age as a poor prognostic factor 3. As the proportion of the elderly among the world population continues to grow3, nearing 20% in developed countries4, so will the importance of melanoma characterization and proper risk stratification in that age group.

The clinical presentation and pathological characteristics in melanoma of the elderly differ from that of their younger counterparts. Melanoma of the elderly has been shown to be more common in men and to be discovered later in its development. The incidence of ulceration, high mitotic index, and advanced Breslow thickness have been shown to be higher in older age groups5-8. Paradoxically, despite lower overall survival in elderly with malignant melanoma, the rate of positive sentinel lymph nodes (SLN) decreases with age3, 9-11. This observation remains unexplained but is likely related at least in part to atrophy of skin lymphatics that occur with age12.

Given the differing clinical presentation, pathological characteristics, and heightened mortality rates of elderly melanoma patients, we aimed to compare disease characteristics and clinical outcomes of patients 70 years of age and older versus under 70 years old.

We reviewed 610 patients with malignant melanoma requiring SLN biopsy entered into a prospective SLN database from Mayo Clinic Arizona, treated from June 1997 to June 2010. Approval was obtained from the Institutional Review Board. Disease characteristics and clinical outcomes were compared between patients ≥70 yrs vs. <70 yrs of age. Subset analysis was performed with a breakdown between age groups of <50, 50-59, 60-69 and >70, but the statistical power of this analysis was limited due to the smaller number of events in the groups. Primary melanoma anatomic locations were divided in four locations: head and neck, lower extremity, trunk, and upper extremity. Characteristics of the primary melanoma that were analyzed included: Breslow's depth, T-stage (<1mm, 1-2mm, 2.01-4mm, >4mm), ulceration, tumor infiltrating lymphocytes (TIL), preexisting nevus, angiolymphatic invasion, perineural invasion, and mitotic rate. Regional disease was assessed by SLN biopsy results. Disease outcome measures included type of recurrence (local/in-transit, regional, systemic), time to recurrence, time to local/in-transit recurrence, disease-specific mortality, and overall mortality.

Comparison of disease characteristics between age groups appears in Table 1.

Elderly patients had thicker tumors, with 43% of elderly patients had a T3 or T4 melanoma compared to 23% in the non-elderly (p<0.001). Patients with age ≥70 had a greater mean number of mitotic figures, 3.6/mm2 vs. 2.7/mm2 (p=0.005) including a greater preponderance of lesions with a high mitotic rate >5/mm2 (29% vs 17%, p=0.003. The elderly patients did not have a greater prevalence of ulceration. Tumors in the elderly were less likely to arise from a pre-existing nevus, 17% vs. 36% (p=0.003). There were no differences in tumor infiltrating lymphocyte status or angiolymphatic invasion.

5-year mortality rate from all causes was greater in the elderly group, 29.8% vs. 12.3% 5 years after surgery (HR=3.0, p<0.001; Figure 2A). Additionally, 5-year disease-specific mortality was higher for those ≥70 years old: 16.1% vs. 8.2% (HR=2.3, p=0.004; Figure 2B). In a multivariate model of melanoma-specific survival, age remained significant after adjusting for known prognostic factors of tumor thickness and positive SLN status.

In our cohort of patients undergoing SLN biopsy, melanoma in the elderly was more common on the head and neck, less likely to arise from a pre-existing nevus, had greater mean tumor thickness and more mitotic figures than melanoma in their younger counterparts. Additionally, higher T-stage melanoma in the elderly was less likely to result in positive sentinel node biopsy. Furthermore, elderly melanoma patients had worse outcomes. They were more likely to have recurrence, including a higher rate of local/in-transit recurrence and systemic recurrence. Consequently, they had a higher disease-specific mortality and worse overall survival. 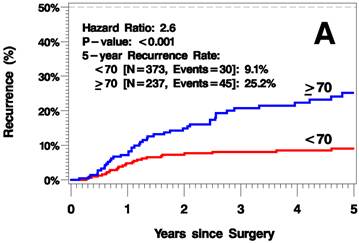 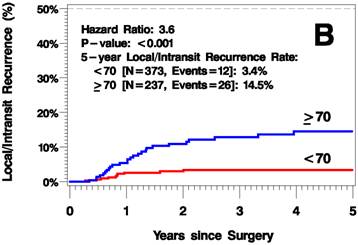 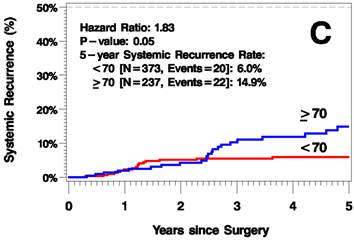 Kaplan-Meier Plots of Overall Survival (A) and Disease-Specific Survival (B). 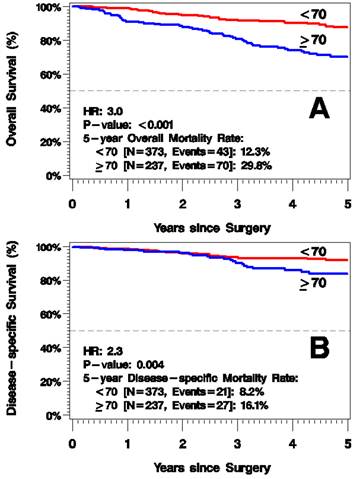 Older age is recognized as an independent poor prognostic factor in melanoma patients. Caraco et al. studied 399 patients with melanoma who underwent SLN biopsy and compared patients ≤50 years vs. >50 years. They found the melanoma patients >50 to have thicker lesions and a higher incidence of ulceration but no difference in the incidence of lymph node metastases. Overall survival was worse among the group >50 and age was a significant prognostic variable in multivariate analysis13. Data from the SEER database and Medicare enrollment and claims files, showed that increasing age after 65 years and melanoma detection by a dermatologist were significantly predictive of survival on multivariate analysis in a population of over 2000 patients 14. In a large dataset of 17,600 melanoma patients, age was an independent prognostic factor for overall survival which was consistent within each thickness subgroup9. Worse prognosis in the elderly may be attributable to the fact that the elderly, especially elderly men, melanoma has been shown to have a more rapid growth rate15, thicker tumors16 and histologic ulceration16. Age as a poor prognostic factor may be the result of weakened immune defense mechanisms 17, 18, which may play a role in melanoma progression. Lastly, competing co-morbidities are much more prevalent in older patients, further contributing to higher overall mortality.

Elderly melanoma patients have been shown to present with tumors of advanced Breslow level 3, 9, 19, 20. Late diagnosis has been implicated as a cause for thicker melanoma with poor prognosis in the elderly. Multiple factors are likely involved in late discovery of cutaneous malignancies in the elderly. Some reasons may include scarcely visible anatomical locations of new pigmented lesions (i.e. scalp, back), loss of a partner's input on home examination, poor vision, less importance placed on changing lesions, and confusing new or changing benign seborrheic keratoses for pigmented lesions21, 22. Furthermore, early detection programs for melanoma have generally targeted younger age groups. Studies have shown disproportionately low screening of elderly men despite this population accounting for 44% of melanoma cases discovered23.

Higher incidence of head and neck melanoma is likely attributable to cumulative photodamage and higher incidence of lentigo maligna melanoma as patients age. Swetter et al. showed that lentigo maligna melanoma was the only melanoma subtype with increasing incidence over a ten-year period and was more common in men ≥65 years 24. As the percentage of elderly persons in the world's population continues to grow, physicians performing melanoma screening should devote heightened attention to heavily sun-exposed sites where melanoma is more and more commonly discovered.

Our data confirmed previously reported findings that the elderly are less likely to have melanoma associated with a pre-existing nevus25. Malignant progression may be the result of continuous and cumulative photodamage to melanocytes not within a nevus26. This has clinical implications to patient education and early detection of melanoma in that age group. When counseling elderly patients regarding self-screening, a shift of focus from characteristics of changing nevi (ABCDE of melanoma) to awareness of any new growths may lead to more routine screening and earlier detection.

Our data demonstrated that the mitotic rate in the elderly melanoma patients was higher than their younger counterparts. Mitotic rate has been associated with worse clinical outcomes in melanoma patients and has been identified as an independent prognostic factor in multiple studies 27-29. In a multifactorial analysis of 10,233 patients with clinically localized melanoma, mitotic rate was the second best prognostic factor of survival behind tumor thickness 29. In a series of more than 1200 cases, mitotic rate was significantly associated with survival and more prognostic than tumor ulceration 28. Higher mitotic rate tumor burden has also been implicated as a factor contributing to a greater likelihood of local/in-transit recurrence and poor clinical outcomes 30. Paek et al. showed mitotic rate is associated with positive SLN, but the impact of mitotic activity on SLN result was less in the elderly compared to younger cohorts 31. Our data was consistent with these observations as our elderly population had more mitotic figures, greater number of non-regional recurrences, and worse clinical outcomes. Additionally, they had a lower positive SLN rate, indicating that mitotic activity had less impact on SLN result in the elderly compared to younger patients.

In advanced T-stage melanoma, despite worse disease-specific and overall mortality, the elderly had far fewer cases of positive SLN biopsies. This paradox is consistent with evidence from prior studies 3, 9-11. Chao et al. studied 5 age groups of melanoma patients in a large series of over 3000 patients. They showed a progressive decline in incidence of SLN metastasis with increasing age across all five age groups. The oldest group (>60 years) had a positive SLN rate of 14.4%, significantly less than the next nearest age groups 3. Our cohort of elderly patients (≥70 years) demonstrated a comparable rate of positive SLN in 11%.

The reason for fewer cases of positive sentinel lymph node biopsies remains uncertain but may be accounted by altered lymphatic drainage in the elderly12. Although the mode of spread in any cancer is never certain, it appears that like younger patients, melanoma in the elderly principally spreads along lymphatic routes as there are more in-transit metastases noted in this age group 32. UV irradiation has been shown to induce VEGF-A-mediated damage of cutaneous lymphatic channels 33, 34. Lifelong accumulation of photodamage is likely contributory to disruption of lymphatic channels, as well as gravity-dependent degeneration, disallowing complete migration of tumor cells to the sentinel node in areas of atrophied lymphatic channels in the elderly.

This study has limitations. The analysis relied on data obtained from a single institution. Subset analysis of age groups <50, 50-59, 60-69, >70 was of limited statistical power because of small number of events in each group. Data was retrieved only from patients undergoing sentinel lymph node biopsy; given the potential selection bias, it may not be valid to generalize conclusions to the entire elderly population with melanoma. Lastly, the follow-up period is limited to a mean of 3.8 years, which may influence outcome data to reflect more poorly on the elderly population.

Given the differing clinical presentation, primary melanoma characteristics, and disparate disease-specific outcomes of melanoma in the elderly compared to non-elderly patients, clinicians and surgeons should be mindful of proper screening and risk-stratification of elderly patients when participating in their care. Due to the higher risk of in-transit disease, follow-up should focus on loco-regional recurrences. These clinical differences may have significant implications for clinical trials. Many adjuvant clinical trials are geared to patients with lymph node positive disease. Due to the fact that the elderly have a much lower incidence of lymph node positive disease but otherwise poorer prognosis, age may need to be included when developing clinical trials in order to evaluate the efficacy of adjuvant therapy in this patient population.