Methods: In an attempt to clarify the relationship between PFS between subsequent systemic therapies, we analyzed the records of 165 advanced cancer patients coming to our clinic for consideration for participation in six different phase I clinical trials requiring detailed and extensive past medical treatment history documentation.

Conclusions: In an advanced cancer population of diverse tumor types, we observe a statistically significant decrease in PFS with each successive standard therapy. Identification of new therapies that reverse this trend of decreasing PFS may lead to improved clinical outcomes.

The treatment of advanced/metastatic cancer often involves systemic chemotherapy. The most robust responses and lengthiest interval of time before disease progression is usually observed with first-line therapy1,2,3. Often, when progression occurs on first-line therapy, subsequent systemic therapies are offered in patients who are eligible for additional therapy based on clinical attributes such as performance status and acceptable laboratory parameters. Subsequent therapies are selected based on tumor type and treatment guidelines, availability of approved agents or off-label use of approved agents, or when feasible, eligibility to participate in a clinical trial involving systemic therapy of an investigational agent. It has been noted that the interval of time between subsequent therapies in advanced/metastatic cancer is reduced after each treatment. For example, progression-free survival (PFS) shortens such that Treatment A > Treatment B > Treatment C > Treatment D, and so on1,2,3. Examination of the relationship between PFS and its impact on disease progression in advanced/metastatic cancer patients leading up to evaluation for participation in a phase I clinical trial has been limited.

Clinical factors that may affect the length of survival during phase I clinical trials for patients with advanced cancers have been identified. Patients receiving more than five prior treatments had a trend toward shorter survival4. A longer median PFS has been observed in lung cancer patients treated on phase I studies that had received two or less prior therapies compared to lung cancer patients treated with more than two prior therapies5. While it appears that PFS tends to get shorter for a number of factors (e.g. tumor progression, toxicity, or patient wishes), there has not been a formal evaluation in an advanced cancer population of diverse tumor types treated with commercially-available systemic therapies. We examined PFS between systemic therapies of commercially available agents prior to presenting for a phase I clinical trial evaluation at our institution.

Participants were all adults with a diagnosis of advanced/metastatic cancer at the time of signed informed consent for screening for a Phase I clinical trial at our center. All patients were selected for inclusion in this analysis because they consented for at least one of six of our phase I trials which require detailed past medical treatment histories, including prior treatment start and stop dates, past surgeries and radiotherapy treatment dates, as part of screening. Clinical characteristics collected include: subject diagnosis, histology, age, gender, stage at diagnosis, prior chemotherapy, prior surgery and radiation therapy, and PFS on systemic therapy for advanced/metastatic cancer was calculated from start of the first systemic therapy regimen for advanced/metastatic cancer (txn) to the start of the next subsequent systemic therapy (txn+1), then txn+1 and txn+2, and so on. PFS between consecutive systemic therapies were calculated using the Jonckheere-Terpstra test. NOTE: if there was a palliative surgical or radiation intervention between one type of systemic therapy (e.g. txn+2 and txn+3 ), then additional PFS calculations were resumed from the starting point txn+3 to the start of txn+4, such that PFS was not calculated between start of txn+2 and txn+3.

Each patient's medical history was reviewed from the time of cancer diagnosis to presentation at our institution for clinical trial evaluation to determine the PFS for each line of therapy. Surgery, radiotherapy, herbal supplements, and investigational therapies were censored. Standard therapies given to patients subsequent to investigational therapies were censored from the data set. Progression dates were defined by the start date of the next chemotherapy agent given. When the exact day of the month for start or stop of a therapy was not provided, the 15th of the month was assigned. When start and progression dates lacked information about the specific month or year, the treatment information was censored.

We reviewed the patient records of 165 unique patients that were evaluated for participation in six phase I trials. Due to a lack of specific start/stop dates, 25 patients had at least one treatment censored for analysis; with one of these patients not having PFS that could be calculated for this study. Seventeen of these twenty-five patients were diagnosed as having less than stage IV disease, with the majority of censored treatments (radiation, surgery, or neoadjuvant or adjuvant chemotherapy) occurring in the non-advanced/metastatic setting. One hundred forty-four patients met criteria for receiving at least one prior non-investigational systemic therapy for advanced/metastatic cancer prior to coming for a phase I treatment evaluation. There were 77 men and 65 women; median age at cancer diagnosis was 55.3 years (range, 9.4 - 81.6 years). The most common types were: colorectal cancer (n=20 (13.9%)), other gastrointestinal cancer (n=17 (11.8%)), adenocarcinoma of the prostate (n=17 (11.8%)), non-small cell lung cancer (NSCLC) (n=13 (9.0%)), breast cancer (n=12 (8.3%)), ovarian cancer (n=11 (7.6%)), and adenocarcinoma of the pancreas (n=9 (6.3%)) (Table I). Patients had a median of three chemotherapy or hormonal treatments (mean, 3.32 treatments; range, 1 - 11 treatments).

Two of the 144 patients did not receive a second systemic therapy prior to evaluation at our center, so PFS could be calculated for the remaining 142 patients. The PFS from txn to txn+3 was significantly decreased (p = 0.001850) (Figure 1). Few advanced cancers have more than four lines of FDA-approved or consensus guidelines recommendations for systemic therapy, thus we examined the time to progression of the first five treatments (p = 2.938e-07) (Figure 2).

*Does not include patients that were censored from analysis. 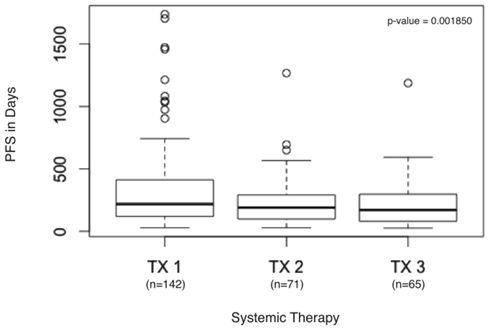 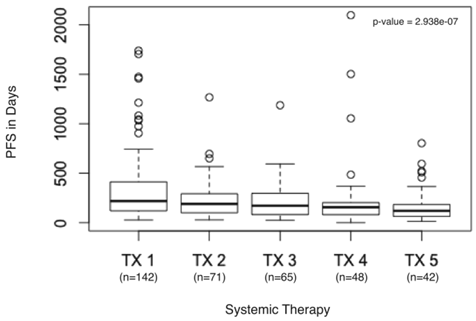 A reversal of decreasing PFS with therapy may suggest a change in the expected course of the disease. Recent examples of new therapies that have dramatically changed the disease course for patients with advanced cancer include targeted cancer therapies such as imatinib for chronic myelogenous leukemia and gastrointestinal stromal tumors (GIST) and erlotinib for NSCLC. In GIST patients treated with imatinib, a specific exon mutation in the tumor correlates with a higher response rate, PFS, and overall survival (OS)60-62. In NSCLC, it is the activating tyrosine kinase mutation in the tumor's EGFR gene that dramatically sensitizes this cancer to erlotinib and gefitinib63-67. These mutations had first been observed in clinical subgroups of NSCLC patients, primarily, Asian never-smoker women with adenocarcinoma60,68-71. Potential “therapeutic efficacy” subgroups may be recognized when a reversal in the expected decreasing PFS during therapy is observed.

We thank the patients and their families, and the rest of the medical team for their assistance.

There are no financial disclosures from any authors.

62. Debiec-Rychter M, Dumez H, Judson I. et al. Use of c-KIT/PDGFRA mutational analysis to predict the clinical response to imatinib in patients with advanced gastrointestinal stromal tumours entered on phase I and II studies of the EORTC Soft Tissue and Bone Sarcoma Group. Eur J Cancer. 2004;40:689-95