Lobular carcinoma in situ is a form of in situ neoplasia that develops within the terminal lobules of the breast. It is an extremely rare finding in males due to the lack of lobular development in the male breast. The authors herein report an unusual case of incidentally discovered lobular carcinoma in situ in a male patient with recurrent bilateral gynecomastia who was subsequently diagnosed with invasive ductal carcinoma of the left breast. The pathology of lobular carcinoma in situ in a male as well as screening MRI surveillance of male patients at high risk for breast cancer are discussed, emphasizing the importance of screening and imaging follow up in men who are at high risk for breast cancer.

Lobular carcinoma in situ (LCIS) is a form of in situ neoplasia that develops within the terminal lobules of the breast. It is extremely rare in males due to the lack of lobular development in the male breast. Furthermore, there is scarce data on the utility of screening MRI for male patients who are known to have high risk lesions.

We herein report a rare case of LCIS in a male breast discovered incidentally on pathologic analysis of the breast tissue, which had been removed during breast reduction surgery for gynecomastia. Invasive ductal carcinoma developed in the ipsilateral breast two years later, as was detected on screening MRI.

The patient is a 55-year-old African American male who reported a brief history of anabolic steroid use and no family history of breast cancer. The patient had a history of multiple surgical procedures for recurrent gynecomastia over the course of many years. The patient presented to our institution for bilateral breast reduction for cosmetic purposes. Pathologic evaluation demonstrated a few foci of LCIS within the left breast along with atypical duct cell hyperplasia in a background of gynecomastia. Due to the highly unusual finding of LCIS in this male patient, genetic analysis was performed and the male XY genotype was confirmed.

The patient was subsequently referred to our breast imaging center for a screening bilateral breast MRI. This demonstrated mild diffuse background enhancement bilaterally without suspicious enhancing signal abnormalities in either breast. Screening annual breast MRI was recommended in view of his highly unusual diagnosis of LCIS.

MR image demonstrating a 1.1 cm suspicious enhancing mass at the left breast 1 o'clock axis for which targeted ultrasound was recommended. 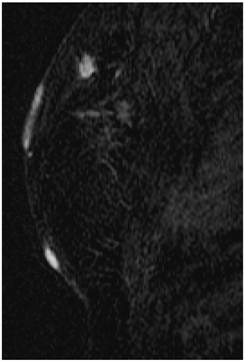 Targeted ultrasound of the left breast demonstrating a solid hypoechoic lesion at the 1 o'clock axis which corresponded to the enhancing lesion on the MRI. 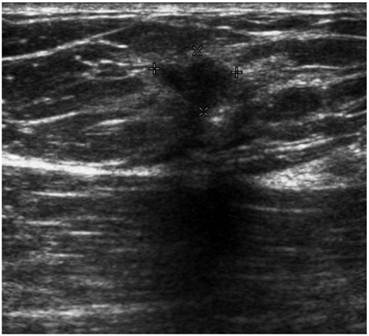 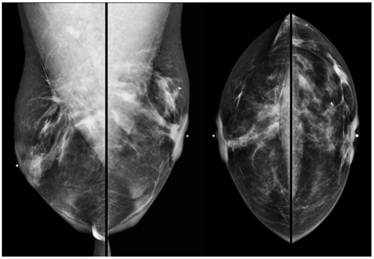 The patient was referred for surgical evaluation. Physical exam at that time revealed that his gynecomastia had recurred and the patient was noted to have C-cup sized breasts. He had significant hypertrophic circumareolar and inframammary scars on both breasts from his previous breast surgeries. BRCA testing was negative. Bilateral mastectomies were performed.

The breast reduction specimen consisted of 426 grams of tissue from the right breast and 490 grams of tissue from the left breast. Gross examination revealed 80% fibrous tissue and 20% adipose tissue without a discrete mass. Extensive histopathologic sampling of the left breast revealed a few foci of lobular carcinoma in situ which was confirmed with a negative E-cadherin immunostain (Figures 4 and 5). Atypical duct cell hyperplasia, cribriform and micropapillary type was also present in a few foci on the left (Figure 6). Both right and left breasts revealed gynecomastia, florid phase.

The ultrasound guided core biopsy specimen demonstrated invasive ductal carcinoma and subsequent bilateral mastectomy specimens revealed a 1.4 x 1.2 x 1.0 cm irregular hard mass at the 1 o'clock position of the left breast. No discrete mass was seen in the right mastectomy specimen. The breast tissue was about 60% fibrous bilaterally. Histopathologic examination of the left breast mass revealed a 1.3 cm well differentiated invasive ductal cancer with a Nottingham Score of 5 of 9, including a tubule score of 2, nuclear pleomorphism score of 2 and mitotic count score of 1 (Figure 7). The carcinoma was strongly and diffusely positive for both estrogen and progesterone receptors and negative for Her-2/Neu. Lobular carcinoma in situ was present bilaterally as was florid phase gynecomastia. Sentinel lymph nodes were negative. 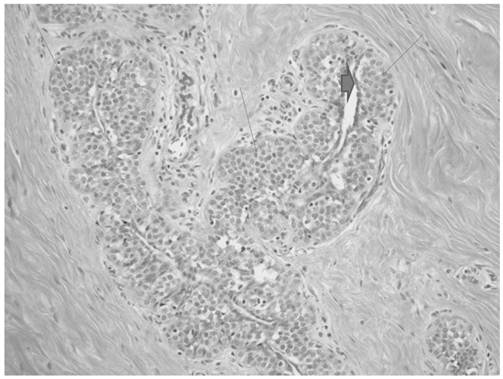 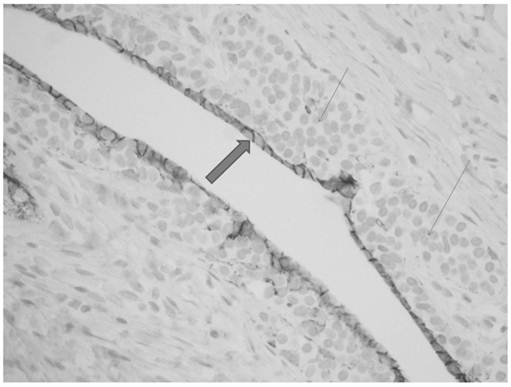 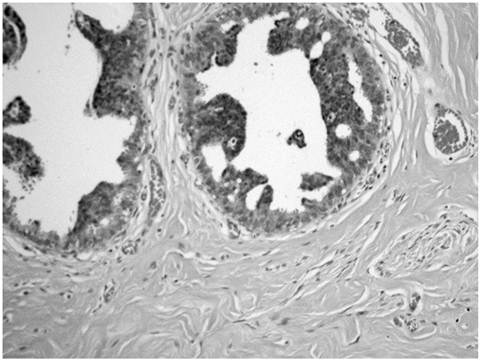 Invasive ductal carcinoma showing a mixture of infiltrating tubules and cords of cells. 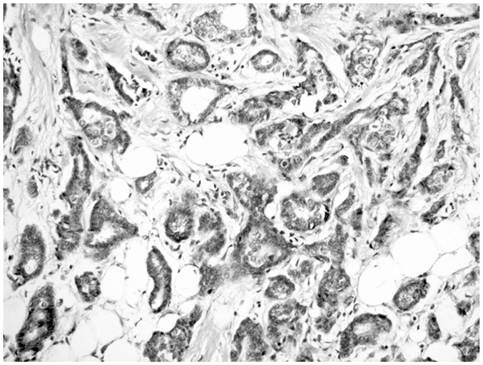 Over the past decade, there has been an increase in the number of imaging studies performed in male patients. These are largely performed in patients who present with complaints of a breast lump and/or breast pain. Although there are no standardized protocols in evaluating the male breast, mammography is usually the initial study and is followed by ultrasound as needed (9). Occasionally, MRI may be obtained for further evaluation, and it has been shown that the diagnostic criteria used in the evaluation of the female breast may be applied to the male breast as well (10). However, there are no guidelines regarding screening mammography in asymptomatic men at any age due to the rarity of male breast cancer. In the absence of screening, most male patients present with clinical symptoms and more advanced disease (11). Current National Comprehensive Cancer Network guidelines for men with BRCA mutations recommend consideration of baseline mammography followed by annual mammography in those men who are shown to have gynecomastia on the baseline study (12).

This case report is, to the best of our knowledge, the first reported case of a genotypic and phenotypic male patient without a BRCA mutation, who was found to have incidental LCIS which was unrelated to a lobular carcinoma. In addition, this is the first reported case of a male patient with LCIS to be screened with annual MRI surveillance and in whom the MRI detected a mammographically occult stage I invasive ductal carcinoma. This case highlights the importance of imaging management and the potential for an improved prognosis in men who are at high risk for breast cancer.