Background: Research over the last twenty years has yielded much insight into pancreatic cancer biology, but it has neither improved diagnostics methods nor the way of treatment. The question remains as to what the critical deciding factor is in making pancreatic cancer such an aggressive disease.

Results: Our study revealed that the structures that correspond to lymphatic vessels were not observed in tumor center but only at the edge of the tumor. All studied growth factors were present in tumor tissue. We found that the difference in expression between G2 and G3 stage was statistically relevant in cases of c-Met receptor. Inflammatory cells were present around neoplastic glands and also strongly around nerves infiltrated by cancer cells. The number of infiltrating macrophages in tumor tissue was significantly higher in group with metastases to lymph nodes.

Conclusion: We showed two factors that influence pancreatic cancer progression and invasion: c-Met receptors and macrophages infiltrating tumor tissue. Based on our analysis, this indicates that epithelial-mesenchymal transition might be crucial in the progression of pancreatic cancer.

Pancreatic adenocarcinoma remains one of the deadliest cancers. 1- and 5-year relative survival rates are 25% and 6%, respectively[1]. The surgical intervention remains main possibility of treatment because chemotherapy and radiotherapy has minimal impact on long-term survival. Research over the last twenty years has yielded much insight into pancreatic cancer biology, but it has neither improved diagnostics methods nor the way of treatment. The question remains as to what the critical deciding factor is in making pancreatic cancer such an aggressive disease.

It was shown in recent years that the tumor microenvironment plays a critical role in tumor progression[2]. In pancreatic tumors this microenvironment is particularly heterogeneous. It consists of dense fibrotic stroma with cancer cells, stellate cells, infiltrating inflammatory cells and the remains of the proper structure of the pancreas. These cells are the source of various growth factors: FGF, EGF, PDGF-BB, HGFα as well as proangiogenic factors: VEGF, VEGF C and their receptors. The fibroblasts present in the tumor's tissue are responsible for the production of collagen and fibronectin which increase the chemoresistance of the tumor. Because of abundant fibrotic tissue, the tumor environment is strongly hypoxic[3],[4]. These all factors contribute to the disease's aggressive nature and occurrence of early metastases.

Infiltrating inflammatory cells are a rich source of factors influencing tumor growth, invasion and metastases. Macrophages are of particular interest. Their role in the tumor's environment has been studied in recent years[5]. It is known that they are a rich source of growth factors that stimulate cell proliferation like EGF, PDGF-BB, HGFα and TGF β. Furthermore they also produce matrix metalloproteinase-9 (MMP9) which takes part in various essential processes like tissue remodeling, angiogenesis, epithelial-mesenchymal transition and activating growth factors[6].

The aim of our study was to investigate three points that may have an influence on the development of the tumor: expression of growth factors, inflammatory cells infiltration and lymphangiogenesis.

Pancreatic tissue samples were collected from 36 patients who underwent surgical resection due to pancreatic cancer. Tissues were collected based on protocol approved by the Bioethics Committee of Warsaw Medical University. Tumors were classified according to TNM staging and tumor grade (Table 1).

For protein isolation, the samples were frozen and stored at -20 °C until they were used. Samples for immunohistochemical analysis with dimensions of 5 x 5 x 5 mm were frozen for 45 seconds in acetone using dry ice at a temperature of -70°C and stored at -80° C.

The analysis was conducted as described previously[11]. In brief, a tissue fragment was injected with 1ml of Paris blue paint suspension in chloroform under low pressure. The injected tissue was fixed in 5% formalin for 1 day and dehydrated for 6 days in turn to 60% 70%, 80%, 96% (two days), 100% ethanol. Then tissue was then placed in methyl salicylate. After at least 3 days it was cut into thick slices and examined under stereomicroscope at 100x magnification.

Staging of tumors obtained from patients.

Frozen tissue from pancreatic cancer was cryocut into 5µm sections and used for analysis. The Dako REAL™ EnVision™ Detection System, Peroxidase/DAB+, Rabbit/Mouse was used for immunostaining. After being dried in room temperature, the slides were fixed with acetone for 10 min. Then they were incubated for 5 min Dual Endogenous Enzyme Block (Dako, Glostrup, Denmark). The sections were incubated with a proper antibody for a 25 minutes. Afterwards incubation with Dako REAL™ EnVision™/HRP, Rabbit/Mouse (ENV) for 25min at room temperature was followed by a color reaction using Dako REAL™ DAB+ Chromogen for 3 minutes. The slides were counterstained with Mayer's hematoxylin. (Antibodies used for immunohistochemistry are listed in Supplementary Material: Table S1).

A comparison was made with the Mann-Whitney U test. Minimal level of significance was defined as p < 0.05.

Color lymphangiography pictures of tumor tissue were evaluated. Only occurrence of veins and tiny fluid-filled intercellular microspaces was observed in tissue specimens. The structures that could correspond to lymphatic vessels were not observed in tumor center (Fig 1). Broadened lymphatic vessels tumor could only be observed at the edge of the tumor. Only a few specimens showed blue dye between collagen fibers.

To identify lymphatic endothelium we used monoclonal antihuman antibodies against: Prox 1, VEGF C, VEGFR3 (flt4), Lyve1, podoplanin and also chemokines and their receptors CCL21 and CCR7, CXCL13 and CXCR5. To distinguish blood and lymphatic vessels, staining for adhesion molecule CD 31 and v.Willebrandt factor was made. Our study showed that Lyve1 as well as VEGF C, were occasionally present in tumor tissue in structures without lumen (Fig 1). Staining did not show the presence of Prox1, podoplanin was expressed mainly in tumor stroma. VEGFR3 was expressed in the vicinity of cancer nests. Chemokine CCL21 and its receptor CCR7 was produced by cancer cells and some stromal cells, but not by lymphatic endothelium. We did not notice any expression of CXCL13 and its receptor CXCR5. 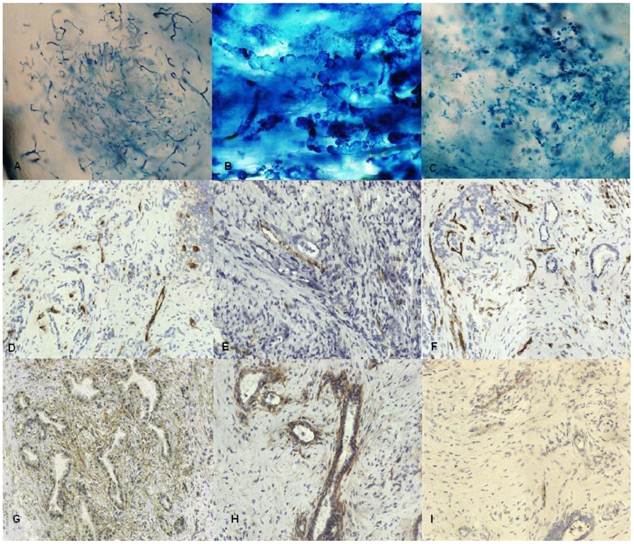 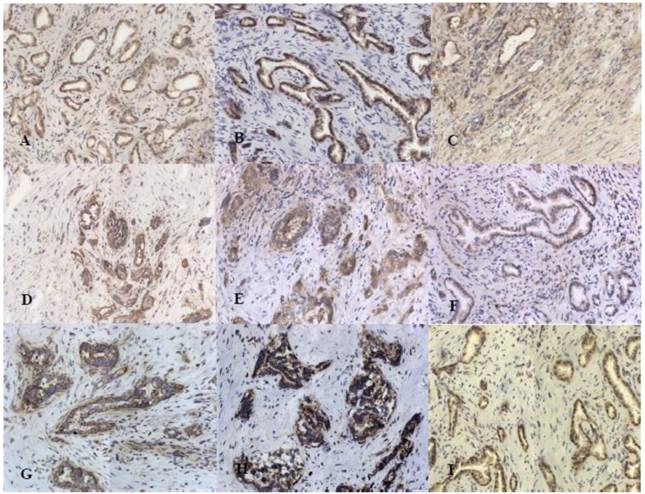 Comparison of expression of growth factors. (NS- not significant, S-significant).

We compared the results due to N stage and we found that the number of macrophages in tumor tissue was significantly higher in group with metastases to lymph nodes (401) than in N0 group (167) (p = 0,0085). 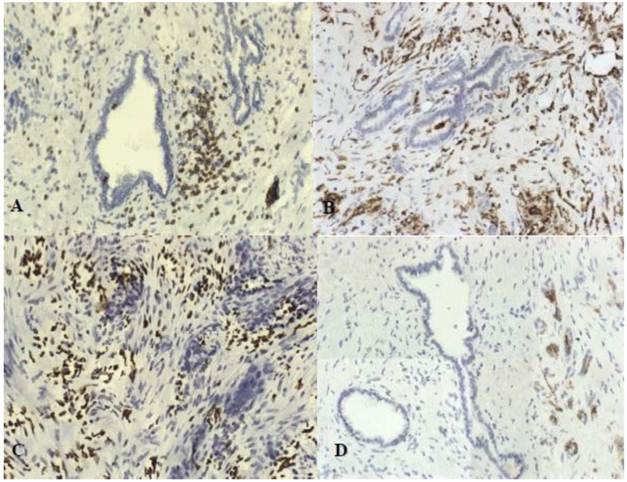 Abundant expression of growth factors is typical for pancreatic cancer tissue. As they participate in signaling pathways mediated by receptor tyrosine kinases they might regulate cell proliferation, migration and survival. Previous studies on expression of growth factors provided interesting observation. It was reported that high level of EGF and EGFR correlated with lymph node involvement and distant metastasis as well as reduced median survival[14]. Strong expression FGF2 was told to correlate with advanced tumor stage and increased invasiveness[15]. FGF7 was connected with increased proliferation in pancreatic cancer cells but also in chronic pancreatitis-like lesions adjacent to cancer cells[16]. Also overexpression of IGF1 and IGF1-R was stated in pancreatic cancer and IGF1-R was suggested to be good target for cancer therapy[17],[18]. Only in case of PDGF-BB high levels in blood serum were favorable prognosis[19] and high expression in tumor was related to decreased pancreatic cancer growth[20]. In our research we observed strong expression of growth factors, however we only for c-Met receptor we were able to claim statistically significant difference between G2 and G3 group. No significant difference was observed in relation to lymph node metastases.

Our results indicate that c-Met might be pivotal element in pancreatic cancer. This receptor tyrosine kinase is activated by HGF and physiologically they participate in embryonic development and also during adult life in liver regeneration and wound healing[21]. However their overexpression is observed in pancreatic cancer, even in early stage of carcinogenesis[22].

c-Met activation leads to increased proliferation, enhanced motility and invasion. Therefore we presume that an increase in c-Met expression between G2 and G3 stages indicates more aggressive phenotype which might be related to epithelial-mesenchymal transition. EMT is often considered a first step to metastases as it is related to reduced E-cadherin expression and appearance on N-cadherin[23]. “Cadherin switch” was also observed in pancreatic cancer[24]. Decreased E-cadherin expression was associated with advanced stage and lymph node metastases[25]. Another factor was linked to lymph nodes involvement - presence of macrophages - this was also confirmed by our studies. Our results indicate that the amount of macrophages is significantly higher in group with lymph node metastases, as it was reported previously[26]. Recently it has been shown that macrophages also participate in EMT process[27]. They not only express EMT- inducing cytokines but also MMP9 that cleaves E-cadherin/β-catenin complex. Tan et al. suggested that macrophage MMP9 supports EMT also by disrupting of basement membrane. This is a crucial mechanism for increased motility and invading other tissues.

Apart from HGFα, other growth factors like IGF1, EGF, FGF are also able to induce EMT23. They are all strongly expressed in pancreatic tumor tissue and their overexpression is usually associated with tumor progression and poorer survival[28],[29].

In conclusion, we showed two factors that influence pancreatic cancer progression and invasion: c-Met receptors and macrophages infiltrating tumor tissue. Based on our analysis, this indicates that epithelial-mesenchymal transition might be crucial in the progression of pancreatic cancer. We intend to examine this through further research.

We would like to thank prof. Anna Nasierowska-Guttmejer and dr Dorota Łącka for histopathological evaluation of tumors. This study was carried out with support from the ministry of Science and Higher Education nr NN404/0693/33.