MicroRNAs are small non-coding RNA molecules that have been shown to regulate the expression of genes linked to cancer. The relevance of microRNAs in the development, progression and prognosis of prostate cancer is not fully understood. It is also possible that these specific molecules may assist in the recognition of aggressive tumors and the development of new molecular targets. Our study investigated the importance of several microRNAs in cases of prostate cancer from 37 patients that were manually microdissected to obtain pure populations of tumor cells, normal epithelium and adjacent stroma. MicroRNA was extracted for PCR array profiling. Differentially expressed miRNAs for each case were used to compare tumor vs. normal epithelium and tumor-adjacent stroma samples.

MicroRNA profiling in prostate cancer appears to have unique expression patterns in comparison with normal tissue. These differential expressed miRNAs may provide novel diagnostic and prognostic tools that will assist in the recognition of prostate cancers with aggressive behavior.

Prostate cancer is the most common non-skin malignancy in men. The American Cancer Society (ACS) 1 estimated that about 240,890 cases of prostate cancer will be newly diagnosed in 2011 and 33,720 men will die from prostate cancer in the United States.

Currently, prostate-specific antigen (PSA) testing, digital rectal examination and histopathological evaluation of prostate needle biopsies are all used for the detection and monitoring of prostate cancer progression. Prostate cancer Gleason score (Gleason grading system) is determined microscopically evaluating the degree of loss of normal glandular tissue architecture. It is used to help to evaluate patient's prognosis 2,3-4 and to guide the clinician's with the best suitable treatment option 5-7. However, the course of the disease is highly variable and occasionally some cases behave independently than their correspondent Gleason score group 8-9. Therefore, new and more specific biomarkers are needed to better predict cancer prognosis.

MicroRNAs (miRNAs) are small (<22 nt), non-coding RNA molecules that play a role in many biological processes. Actually more than 1,400 human miRNA sequences have been identified thus far and many of them linked to cancer pathogenesis. It has been shown that they modulate the expression levels of proteins based on sequence complementarity with their target mRNA. Interestingly, while coding sequences in one gene can be regulated by several miRNAs, one miRNA may target multiple mRNAs. Their relevance in cancer is related to the regulation of important cellular processes and pathways involving tumorigenesis, cell proliferation, differentiation and apoptosis among others 10.

Previous studies have suggested a role for miRNAs as diagnostic markers in tumors that show a specific profile 11, and more recently they have been used as therapeutic targets in several trials 12-13. Specific miRNA signatures in solid tumors have been found frequently in colon 14, breast15, bladder 16-17 and pancreatic cancer. In prostate cancer, screening of miRNAs profiles from tumor versus normal tissues has reported inconsistent patterns, showing occasionally up-regulation 18 and generally down-regulation of miRNAs 19. Although around 50 miRNAs have been linked to prostate cancer, few of them have been showed to be related with disease pathogenesis 20. MicroRNAs in prostate cancer have been suggested to have a relevant role as biomarkers; a more recent comparison of expression profile in prostate cancer versus benign hyperplastic prostate showed some miRNAs that may discriminate between the two groups 21.

In order to understand the role of miRNA in prostate cancer tumorigenesis, we performed a comprehensive differential miRNA expression analysis of a group of prostate tumors with different Gleason score compared to their corresponding normal epithelium and stromal tissue.

Differential miRNA expression profiling: Differentially expressed miRNAs for each case, and according Gleason score were compared with the normal epithelium and stromal tissue, defined as those with a two-fold change and a false discovery rate <5%. Low grade tumors were the presenting Gleason score 6 and 7 (3+3; 3+4) and High grade tumors were Gleason score 8 and 9 (4+4; 4+5). Unsupervised clustering was used to evaluate the role of significant expressed miRNAs according the Gleason grade. Different profiles were designed to compare prostate cancer (low and high grade) vs. normal epithelium and vs. stroma cells (Figure 1).

Statistical analysis: A two-fold change (Up or down) was determined as significant. MicroRNA expression was also correlated to the clinicopathologic features of the tumors. The relationship between these variables was evaluated by the Mann-Whitney or Kruskall-Wallis non-parametric tests and significance was defined as p<0.05.

MicroRNA prostate cancer profiles investigated in this study. After manual microdissection, separate groups of cells were preserved and then used for comparison. 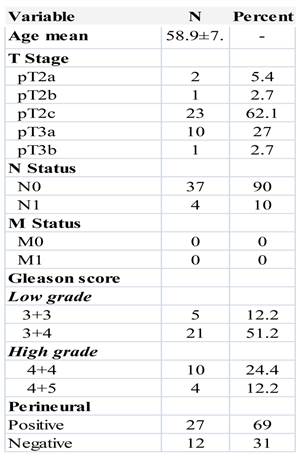 MicroRNA-193b and 181b, miR-20a and 10b, and miR-125a and 155 were differentially expressed in patients having perineural (PI), extracapsular extension and lymphatic invasion, respectively. 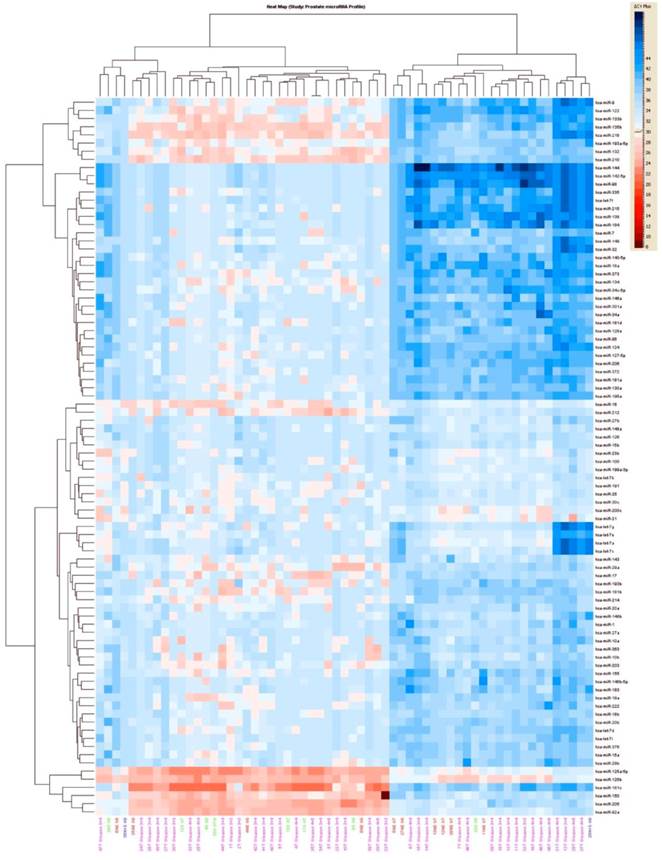 In some cases, we additionally investigated if prostate tumor heterogeneity was related with different miRNAs profiles, in the same case areas of low grade tumors and areas of high grade tumors were microdissected, and then compared with each other. Different profiles were seen in the two tumor areas, Figure 4.

Profile of upregulated miRNA found in stroma tissue in comparison with normal epithelium. 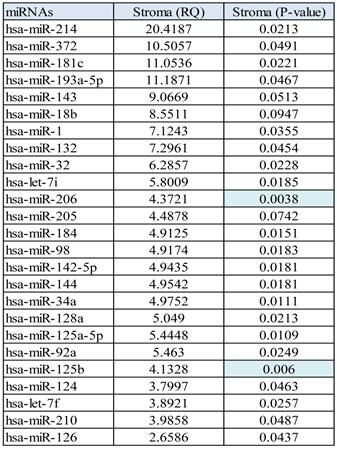 Differentially expressed miRNAs in tumor and stroma versus normal epithelium. 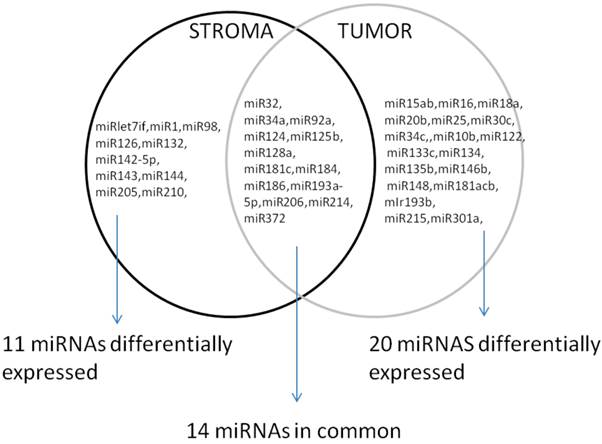 Histological appearance of a selected case analyzed. A) Low power slide scan demonstrating the heterogeneity of the disease. Note the occurrence of malignant transformation in different parts of the gland, areas of high grade disease (Gleason >8) and small areas of low grade cancer are both occurring in the peripheral zone. B) High magnification of the high grade area. Note the complete loss of normal gland pattern with solid tumor cell clustering. C) Low Gleason score areas also in the peripheral zone. The micrographs highlight the need for cell enrichment for the analysis of prostate cancer samples. 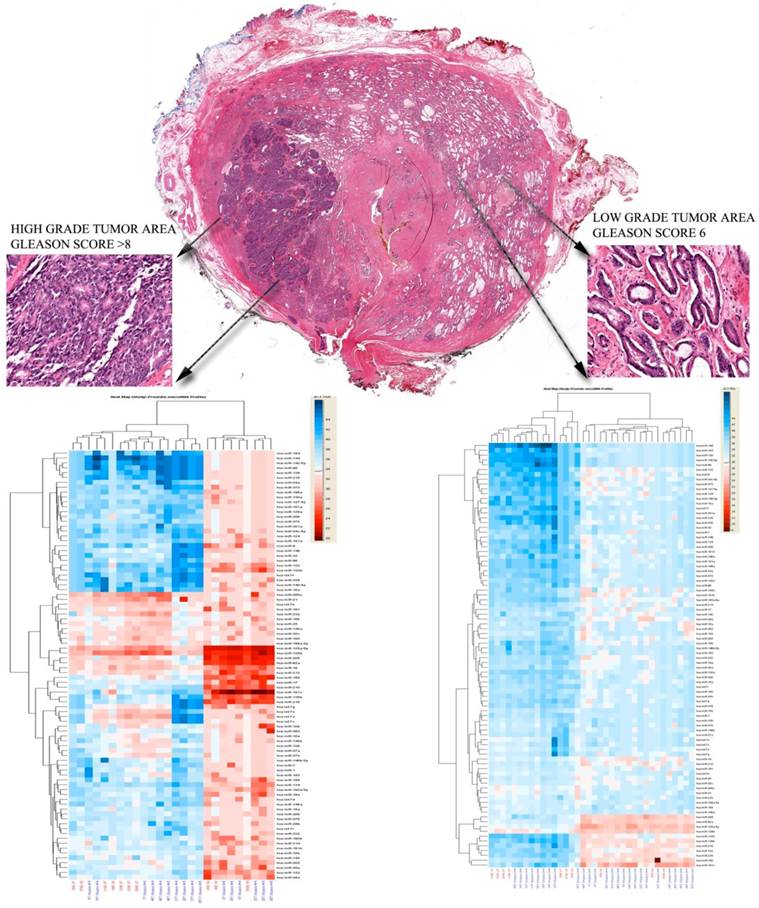 Our data show consistent dysregulation of miRNAs in human prostate cancer, some of which are potentially involved in tumor formation and progression. We had determined initially genome-wide expression changes of miRNAs in a group of prostate tumors representing different Gleason score, which were classified as low grade tumors (Gleason score ≤7) and high grade tumors (Gleason score≥8), and compared for the first time the profile with normal epithelium and stromal tissue. The carefully needle microdisecction by a specialized pathologist of whole mount FFPE prostatectomy samples support the specificity of the results for each cells group with less chance to contamination as can be happen in other studies. The analysis revealed an important role of miRNAs as key regulators in the pathogenesis of prostate cancer.

Some of these miRNAs may regulate the expression of cancer-related genes in prostate cancer affecting the phenotype of these cells, because in same patients expression profiles were different according the most common morphologic pattern evaluated by a pathologist.

Interestingly, stroma and normal epithelium showed different pattern of expression, been more dysregulated in some tumors suggesting a potential previous alteration than in the rest of the cases.

Differently expressed miRNAs have been suggested to have an impact as a diagnostic, prognosis and predictor biomarkers in prostate cancer. Previous studies were focused in blood-based circulating miRNAs profile in prostate cancer supported by their tissue specificity feature 24.

Within the group of miRNAs that were specific for stromal prostate tissue that discriminated between tumor cells when were compared with normal epithelium were the following:, miR-let7, miR-1,miR-98, miR-126, miR-132, miR-142, miR-143, miR-144, miR-205, miR-210. Interestingly, a recent study performed in prostate cancer suggested that miR-205 was linked with basement membrane located in the extracellular matrix of the normal epithelial glands in the prostate. The lack of the basement membrane integrity may potentially be related with tumor cell invasion and metastasis formation and the therapeutic role of this miRNA is highlighted 25.

Our data are consistent with the results from independent groups analyzing prostate cancer demonstrating expression of miRNAs cluster at significantly higher levels than normal tissue.

MicroRNA profiling in prostate tumors demonstrates distinctive expression patterns for tumor cells. While the miRNA signature can reflect differences in the underlying and unique molecular changes for tumors with high or low grade Gleason score, it can be used to support the diagnosis but also to detect some cases that will have a poor prognosis.

MicroRNA expression seems to be involved in some steps of pathogenesis: both as an element for tumor development as well as a consequence of or in response to the initial malignant transformation and part of tumor progression.

In summary, the results of this study uncover an etiological contribution of miRNAs in prostate cancer and validate their use for future studies concentrating on the role of individual miRNAs in disease progression that could be used for development of miRNA-based diagnostic and therapeutic strategies. A more detailed understanding of the molecular mechanisms and regulatory pathways at work in prostate cancer will enormously assist in improving the design and target selection of therapeutic strategies.

7. Cerovic S, Brajuskovic G. [Forty years' use of Gleason grading in the diagnostics and treatment of prostate cancer]. Vojnosanit Pregl. 2006;63:1049-53