Introduction and Objective: ERG oncogene fusions (predominantly TMPRSS2-ERG) represent the most common (50-70% frequency) and validated prostate cancer (CaP) genome alteration in the Western countries. A common TMPRSS2-ERG fusion type leads to the androgen dependent tumor cell specific expression of the TMPRSS2-ERG fusion transcript and amino terminally truncated ERG oncoprotein. CaP prevalence and aggressiveness, as well as genomic alterations vary in different geographic locations in the world. Recent studies from our group highlighted significantly lower frequency of ERG alterations in prostate index tumors of African American men (~30%) in comparison to Caucasian Americans (~60%). Further, much lower frequencies (10 -25%) of ERG alterations have been reported in studies from China and Japan. There is no study on ERG alterations in CaP patients from India, representing a significant portion of the world male population. This study focuses on the frequency of ERG oncoprotein expression in CaP patients from India.

Results: Specimens reflecting prior hormonal treatment, or lacking any tumor content, were excluded from the analyses. Of the thirty evaluable specimens, ERG positive tumors were present in 8 cases (27%) and one tumor specimen exhibited rare ERG positive cells. None of the benign glands were positive for ERG supporting previous studies showing complete specificity of the ERG oncoprotein for detection of tumors cells in prostate.

Conclusions: Frequency of ERG oncoprotein expression is much lower in CaP patients from India in comparison to higher frequency of ERG alterations noted in Western countries. ERG frequency in Indian CaP is similar to observations from Japan and China. Since ERG oncogenic activation is a promising biomarker and therapeutic target for CaP, careful evaluation of ERG is needed in CaP patients from different parts of the world.

Prostate cancer (CaP) remains the most common non-skin cancer of men and the second leading cause of cancer deaths in the USA1. CaP is the fifth most common cancer in the world in both sexes and second most common in men after melanoma2. CaP prevalence and aggressiveness, as well as genomic alterations, vary in different geographic locations in the world with it being most prevalent in Caucasians and least prevalent among Asians3,4. According to the World Health Organization GLOBOCAN data from 2008, the highest regional incidence is in Australia and New Zealand (104.2 per 100,000) and the lowest in South-Central Asia (4.1 per 100,000)2. The incidence in India has been steadily increasing by approximately 10% from 1978 to 19974 and in 2008 was 3.7 per 100,000, with a mortality rate of 2.5 per 100,0002. It is also noted that a much higher percentage of the CaP is detected in the advanced stages which is likely due to the lack of wide spread use of CaP screening.

De-identified formalin-fixed, paraffin-embedded specimens from RP specimens of 51 patients from RGCI, New Delhi, India, were analyzed. The specimens were collected from 2003-2008 under an International Institutional Review Board-approved protocol.

Evaluation of the ERG oncoprotein expression in prostate tissues was performed as described previously26. Briefly, four µm sections were taken from the specimens that were deparaffinized, dehydrated and blocked in 0.6% hydrogen peroxide in methanol for 20 min. The sections were then microwaved in EDTA (pH 8.0) for 30 min. and cooled for 30 min. at room temperature in EDTA buffer. The sections were then blocked in 1% horse serum for 40 min. and were incubated with the ERG-MAb mouse monoclonal antibody (9FY, available from Biocare Medical Inc.) at a dilution of 1:1280 for 60 min. at room temperature. Sections were incubated with the biotinylated horse anti-mouse antibody at a dilution of 1:200 (Vector Laboratories, Burlingame, CA) for 30 min. followed by treatment with the ABC Kit (Vector Laboratories, Burlingame, CA) for 30 min. The color was developed by VIP (Vector Laboratories, Burlingame, CA) treatment for 5 min. and the sections were counterstained by hematoxylin. ERG expression was reported as positive or negative within the specimen. Positive staining of endothelial cells in specimens served as built-in control for the assay. ERG protein expression was also correlated with clinico-pathologic features.

Of the original 51 specimens, 30 (Table 1) were evaluable for identifying the incidence of ERG positivity (Figure 1). Specimens were not included if they had prior hormonal treatment (13 patients), or the specimen did not contain any tumor (8 patients). ERG positive tumors were present in 8 of 30 cases (27%) and one tumor specimen exhibited rare ERG positive cells. None of the benign glands were positive for ERG supporting previous studies on complete specificity of ERG oncoprotein for detection of tumors cells in prostate. There were no primary Gleason 5 patterns in the ERG positive cohort (Table 2). All of the tumors that were positive for ERG were confirmed to have ERG rearrangement by FISH. Three specimens demonstrated collision tumors where there was a distinct margin within a tumor of glands staining positive for ERG and those that did not. Of 27 evaluable specimens with clinical data, ERG expression had no significant association with any of the clinicopathological parameters (data not shown). 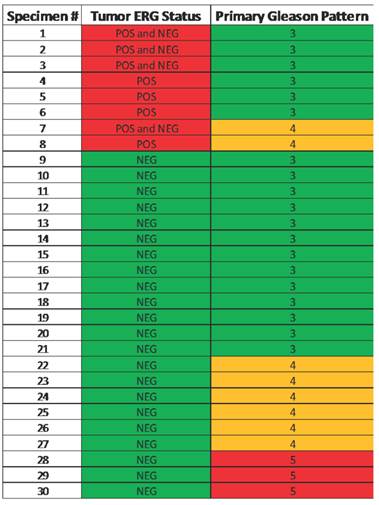 Note that none of the primary pattern Gleason 5 lesions were ERG positive.

ERG immunohistochemical staining in prostate tissue. Representative consecutive prostate tumor sections were stained by H&E (a and c) and by ERG-MAb mouse monoclonal antibody (b and d). Nuclear staining of the tumor epithelium is apparent in ERG positive tumors (b), and missing in ERG negative tumors (d). 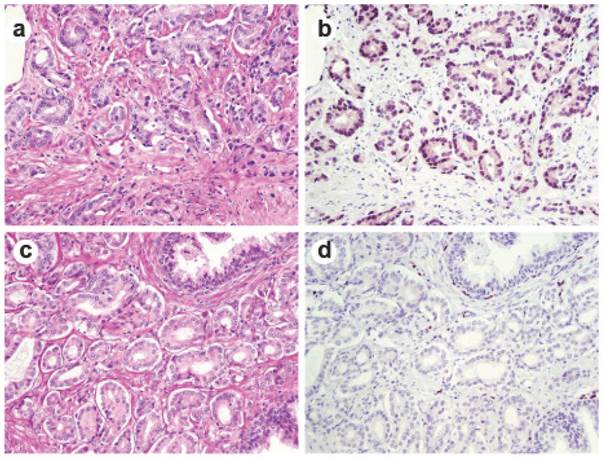 This study provides first glimpse into the ERG gene and protein alterations in CaP from India. As noted before CaP associated ERG alterations are highest in men of European ancestry and lowest in Asians men with intermediate frequencies noted for African Americans. Although larger studies are needed, ERG frequencies in Indian CaP are similar to Asian frequencies. Further, there are no studies of ERG in CaP from Africa till date. Clearly there is need for careful evaluations of the CaP associated ERG alterations in the global context as this cancer gene is the most common CaP gene defect in Western countries and it is a promising therapeutic and biomarker target.

While there is hardly any information available on CaP associated somatic gene alterations in Indian population, there are numerous studies of association of single nucleotide polymorphisms (SNP). Kesarwani et al. demonstrated single nucleotide polymorphisms in tumor necrosis factor alpha may influence CaP risk, stage and progression in the North Indian population28. Another genetic factor that has been studied among several populations is the glutathione S-transferase gene (GSTM1, GSTT1 and GSTP1). In the North Indian population, there was a higher risk of CaP in men with the GSTP1-313 G, GSTM1 and GSTT1 alleles. A combination of the GST genotypes further increased risk of CaP29. The results found here are similar to those in Japan, but differ from prior studies looking at Austrian, German and American populations30-33. In contrast to these studies, the widely studied SNPs on chromosome 8q24 showing association with risk of CaP in Western countries were also found in Indian population34.

Genetics, diet, lifestyle and environmental conditions are all likely affecting the incidence of any cancer including CaP among different demographics. The multifactorial influences involved in the development and progression of CaP represent a complex puzzle. The CaP associated ERG gene alteration is a potentially important piece in this puzzle that may guide us to differences of underlying biology of CaP among different demographics. These observations will have a significant impact in the management of CaP in different populations as we begin to develop the biological stratification of CaP.

A research grant from National Cancer Institute R01CA162383 (S. S.) and CPDR program fund HU0001-10-2-0002 supported this work. The authors would like to thank Yongmei Chen for statistical support.

The views expressed in this paper are those of the authors and do not reflect the official policy of the Department of the Army, Department of Defense or the U.S. Government.