Background: This study was undertaken to investigate the growth rate and clinical outcome of patients with a small renal mass (SRM) after delayed surgery versus immediate surgery.

Methods: We reviewed the clinical records of 328 patients with SRM ≦ 4cm at diagnosis, who underwent delayed or immediate surgical intervention from January 2000 to December 2011. Radiographic evaluation using CT scan and MRI were performed at least every 6 months and the tumor size was determined at least twice in the delayed surgery group.

Results: A total of 292 RCC patients with pT1aN0M0 were identified; among them, 32 patients had been managed with delayed surgery intervention. No statistically significant difference was observed in overall survival rate (OSR) and cancer recurrence-free rate (CRFR). But cancer-specific survival rate (CSSR) was significantly lower in the delayed surgery group (p=0.0002).

Conclusions: The overall survival rate of delayed surgery was not inferior compared with that after immediate surgery. Delayed surgery intervention for SRMs is a treatment option in the current study.

A retrospective review has revealed that most SRMs show a slow growth rate and low malignant potential.6 Metastasis may occur in 7% of patients with small renal cell carcinoma.7

A significant number of SRMs are diagnosed as incidental tumors, often in elderly patients. As life expectancy continues to improve, the number of patients with incidentally detected renal masses is likely to increase further, as will the number of patients being offered surgical intervention. There is increasing evidence to suggest that surgical intervention may not be needed in all SRMs.8

The clinical records of 328 patients with 338 detected SRMs ≦ 4cm were retrospectively reviewed at Kinki University Faculty of Medicine and affiliated hospital from January 2000 to December 2011. All patients had undergone surgical interventions. The choice of treatment was based on tumor characteristics, patients factors, including age and overall survival risk. We only included patients with cT1aN0M0 SRMs managed by delayed or immediate interventions. Routine percutaneous renal biopsy of cT1a lesions was not performed.

Clinical and pathological stages were determined using the 2009 American Joint Committee on Cancer / International Union Against Cancer TNM guidelines.9 After surgery, the patients were followed up every 3-6 months.

Clinicopathological characteristics of 328 patients with 338 SRMs. 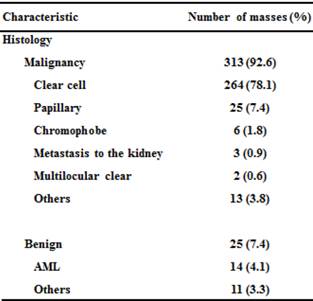 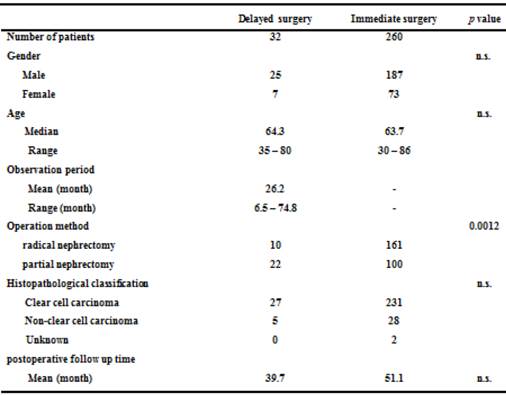 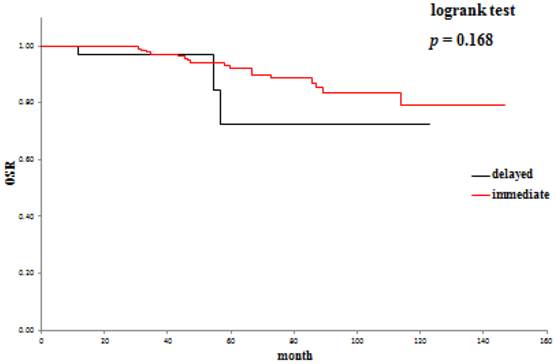 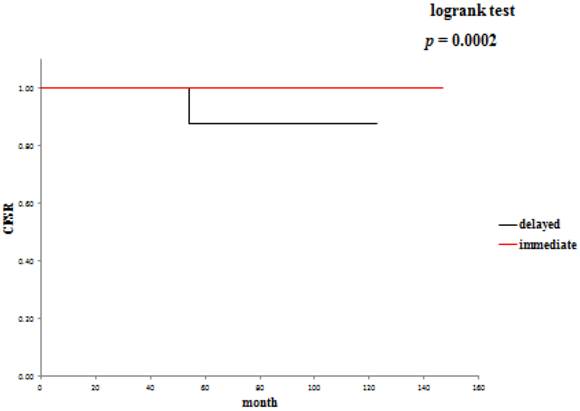 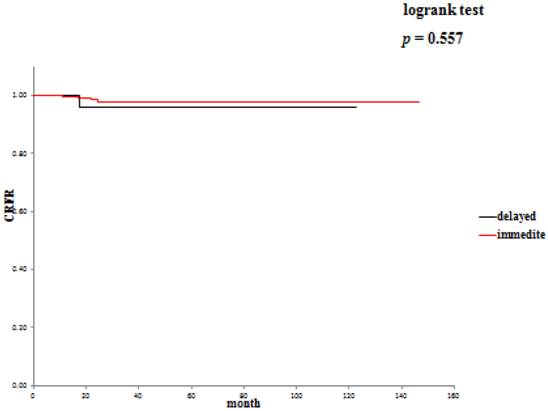 A greater number of small, asymptomatic renal tumors are being incidentally detected nowadays. The good prognosis of incidental RCC is excellent as evidenced by the results of surgery.8,10

Active surveillance is most commonly considered in early prostate cancer, however, recent advances regarding tumor detection tools such as ultrasound and high speed CT scan, have made surveillance of RCC possible.11-15 Active surveillance is becoming more common, in particular in elderly patients or patients with comorbidities who may not be candidates for surgery. This approach is based on retrospective cohort study of the growth rate and natural history of incidentally detected small renal tumors.14-16

Factors to be taken into account for SRM treatment involve tumor size at the time of diagnosis as well as tumor proliferation rate; 55% to 60% of SRM are indolent RCC and 20% to 25% are progressive RCC.17,18 Considering preoperative progression factors, these models allow quantitative detailing of the risks of recurrence, metastasis and survival. However, these tools have several limitations regarding highly qualified treatment decisions in the management of SRM.16

In general, size is proportionate to the grade of malignancy.19 Now then, when should tumors be treated proactively? How big in diameter? In the case of SRM smaller than 1.0 cm, 38-46% are benign. On the other hand, only 6.3-7.1% are benign for lesions larger than 7.0 cm.20 It has been reported that renal masses ≧3 cm in diameter have more aggressive potential, resulting in more metastatic cases.21,22

Generally, local recurrence rates of RCC reportedly vary from 0% to 7%, and disease-specific survival probabilities ranged from 89% to 100%.24 In our study 34 of 328 patients underwent delayed surgical intervention. In this study, patients with a time to tumor doubling (TTD) of more than six months had a trigger to transit to the operation. As a result, one of 34 patients died of local recurrence.25

In conclusion, because short and intermediate term oncological outcomes of active surveillance and delayed intervention for SRMs are the same,27 active surveillance including delayed intervention surgery for small renal cell carcinoma may be considered a useful strategy by more institutions and become a treatment option in the future. Future investigations and development of molecular and histologic markers of disease progression are needed, as well as randomized clinical trials to investigate the efficacy of active surveillance and delayed surgery management. Accumulation of such data may contribute to future management of SRMs.

The authors report no conflicts of interest in this work.