BACKGROUND: ACE inhibitors (ACEIs) and angiotensin receptor blockers (ARBs) may have anti-tumor properties. We investigated whether the use of ACEI/ARBs affects the clinical outcomes of primary breast cancer patients receiving taxane and anthracycline-based neoadjuvant chemotherapy.

METHODS: We included 1449 patients with diagnosis of invasive primary breast cancer diagnosed at the MD Anderson Cancer Center between 1995 and 2007 who underwent neoadjuvant chemotherapy. Of them, 160 (11%) patients were identified by review of their medical record, as ACEI/ARBs users. We compared pathologic complete response (pCR) rates, relapse-free survival (RFS), disease-specific survival (DSS) and overall survival (OS) between ACEI/ARB users and non-users. Descriptive statistics and Cox proportional hazards model were used in the analyses.

CONCLUSION: No differences in pCR and survival outcomes were seen between ACEI/ARB users and non-users among breast cancer patients receiving neoadjuvant chemotherapy. ARB use may be associated with improved RFS. Further research is needed to validate this finding.

The renin angiotensin system (RAS) is a peptide based homeostatic gatekeeper system known to play a role in blood pressure control and electrolyte balance[1, 2]. ACE inhibitors (ACEIs) and angiotensin receptor blockers (ARBs) are the two widely used RAS antagonists. They inhibit the effect of angiotensin II, and they are used in the treatment of hypertension, congestive heart failure, and diabetic nephropathy. There is a growing body of evidence to suggest that ACEIs might have anti-tumor properties[2, 3]. Angiotensin II is now regarded as a tumor growth promoter via angiogenesis from activation of the VEGF pathway[4-6]. In animal studies, ACEI administration has led to decreased neo-vascularization and VEGF levels[7, 8]. ACEIs have also demonstrated anti-inflammatory and pro-apoptotic activity via the NF kappa B and apoptosis pathways, respectively[2, 3]. In addition, although still controversial, epidemiologic studies have found that the use of ACEIs was associated with decreased risk of developing cancers including solid and skin cancers[9-12].

Breast cancer is the second most common cause of cancer-related mortality among women in the US[13]. Breast cancer was shown to express full components of the RAS[14]. Angiotensin II acts as a growth factor both in normal and cancer breast epithelial cells and promotes adhesion and invasion[15, 16]. AGTR1, a gene encoding angiotensin receptor type 1, was found to be markedly expressed in 10-20% of human breast cancer tissues, mutually exclusive with ERBB2 overexpression. Furthermore, the ectopic expression of AGTR1 in primary mammary epithelial cells combined with angiotensin II stimulation induced cell proliferation later attenuated by the ARB[17].

Neoadjuvant systemic therapy (NST) is part of the standard treatment for locally advanced and inflammatory breast cancer, and it is increasingly used in earlier stage disease. NST produces downstaging of the disease leading to better surgical resectability while assessing the efficacy of the chemotherapy regimen. Achieving a pathologic complete response (pCR) is an independent surrogate marker for better long-term outcome[18-22]. The purpose of our study was to determine whether the use of RAS antagonists affected the clinical outcome of primary breast cancer patients receiving NST.

From a prospectively maintained database in the Breast Medical Oncology department at The University of Texas MD Anderson Cancer Center, we identified patients receiving NST. We included a total of 1449 patients with diagnosis of invasive breast cancer between 1995 and 2007 treated with anthracycline and taxane-based NST. We excluded patients with metastatic disease at the time of diagnosis, patients with bilateral disease, or male breast cancer patients. We collected demographic variables, tumor characteristics (histology; grade; lymphovascular invasion [LVI]; estrogen receptor [ER]; progesterone receptor [PR]; and human epidermal growth factor receptor 2 [HER2] status), clinical stage at diagnosis (according to the American Joint Committee on Cancer Criteria, 6th edition[23]), body mass index (BMI), pathological stage, and recurrence and survival information. Patients treated with ACEI/ARBs while on NST were identified by chart and pharmacy medication record review. The type of ACEIs or ARBs and other medications that may affect pCR and relapse (beta-blocker, metformin) were also collected as we previously reported[24-27]. Patients were followed according to current practice guidelines[28]. The institutional review board of our institution approved the retrospective review of the medical records for the purpose of this study.

All pathologic specimens were reviewed by dedicated breast pathologists. The histology, grade, pathologic stage, and analysis of ER, PR, and HER2 status were classified as previously described[29]. All surgical breast and axillary lymph node specimens were reviewed to identify the presence of residual disease. pCR was defined as no evidence of invasive carcinoma in the breast and axillary lymph nodes at time of surgery[25].

All patients received NST with anthracycline (doxorubicin, epirubicin) and taxane (paclitaxel, docetaxel) based regimen. Detailed chemotherapy regimens are decribed in our early studies[24-26]. At the completion of NST, every patient underwent definitive surgery. Axillary lymph node staging with axillary lymph node dissection or sentinel lymph node biopsy was performed on all patients. Adjuvant hormonal therapy and/or trastuzumab treatment was administered according to standard practice[28]. Trastuzumab was not used in the neoadjuvant setting. Radiation was delivered when patients underwent breast conservation surgery or had locally advanced disease; a primary tumor measuring > 5 cm, or ≥ 4 involved lymph nodes.

Patient characteristics were compared according to whether patients received ACEIs/ARBs. Survival analyses were performed to compare the relapse-free survival (RFS), disease-specific survival (DSS) and overall survival (OS) between groups. RFS was defined from the date of diagnosis to the date of first documented local or distant recurrence or last follow-up. Patients who died before experiencing disease recurrence were censored at their date of death. DSS was measured from the date of diagnosis to the date of death from disease or last follow-up. OS was calculated from the date of diagnosis to the date of death from any cause or last follow-up. The Kaplan-Meier method was used to estimate the survival outcomes. A multivariable logistic regression model was fit to examine the relation between the use of ACEI/ARBs and pCR. Variables in the model included age, stage of disease, tumor grade, tumor subtype, LVI, and BMI. We also included the use of metformin and beta-blockers as covariates in the model based on our prior findings[24, 26]. Cox proportional hazards models were fitted to determine the association of ACEi/ARBs use with survival outcomes after adjustment for other patient and clinical characteristics. Subset analyses were carried out within each of the three subtype groups: hormonal receptor positive, HER2 positive and triple receptor negative. Statistical analyses were performed using SAS (version 9.1; SAS Institute Inc, Cary, NC) and S-Plus 7.0 (Insightful Corporation, Seattle, Wash) statistical software. P values<0.05 were considered to be statistically significant, all tests were two sided.

ACE inhibitors and / or ARBs with Survival Outcomes

In a subset analyses according to tumor subtype ACEI use was associated with a worse 5-year OS rate (77% for ACEI versus 84% for non-ACEI/ARB; P=0.04) in patients with hormone receptor-positive tumors. However, after adjustment for potential confounders, the effect of ACEIs was no longer significant (HR=1.14; 95%CI=0.60-2.19). Similar 5-year OS rates were seen among patients with triple-negative and HER2-positive tumors according to ACE/ARB use.

Recurrence free survival, disease specific survival, and overall survival by the use of ACEI/ARBs (A), ACEI only (B), and ARB only (C) among all patients. Abbreviations: ACEI/ARB, angiotensin converting enzyme inhibitor/angiotensin receptor antagonist 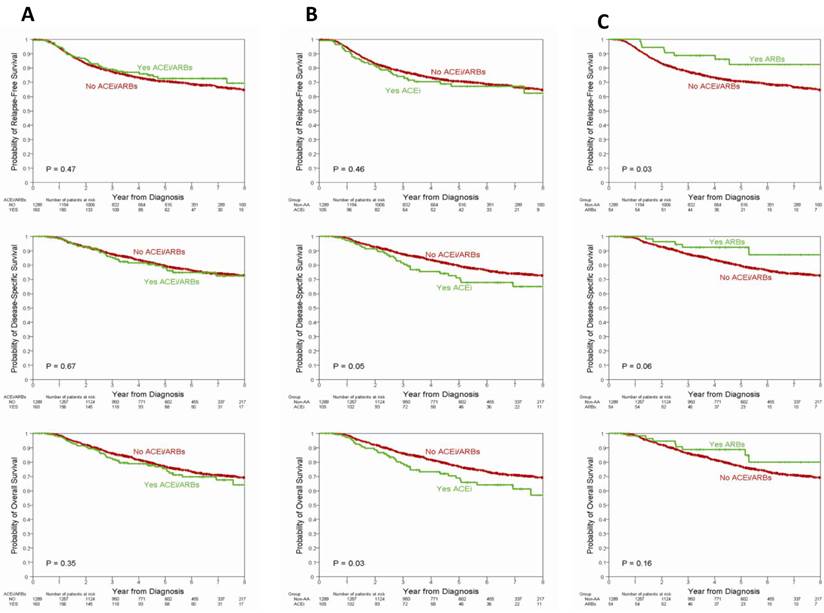 The purpose of our study was to assess the effect of ACEI/ARB use on pCR rates and subsequent survival outcomes in patients treated with taxane- and anthracycline- based neoadjuvant chemotherapy. We found that the use of ACEI/ARBs at the time of chemotherapy had no effect on either the pCR rates or survival outcome measures including RFS, DSS and OS. Based on previous reports describing AGTR1 overexpression in hormone receptor positive and HER2-negative tumors[1], we explored the effect of ACEI/ARBs according to different tumor subtypes, but no significant differences were observed.

When stratified by ACEIs and ARBs use separately and compared to the non- ACEI/ARB group, we found that ARB use was associated with favorable RFS, there was a trend favoring DSS but there were no differences in OS. Even after controlling for possible confounders, the association remained statistically significant for RFS (HR=0.35, 95%CI=0.14-0.86). ARB use alone has not been previously reported to be associated with decrease risk of breast cancer recurrence. Sensitivity analysis comparing the ACEI group with the non-ACEI group, and the ARB group with the non-ARB group were performed. We found similar results as above indicating that the effect of ARB use may not be from the differences in the control groups (result not shown). The small number of events among ARB users warrants a careful interpretation of this finding.

There are many biological models to explain possible anti-tumor or anti-angiogenic effects of RAS antagonists in cell line and animal xenograft models[2-8]. A favorable effect of ARBs in our study may be explained by these properties. However, the consequence of long term suppression of RAS may cause unintended detrimental side effects such as up-regulation of the angiotensin receptors or related downstream pathway molecules. ACEI and ARB may differ in this paradoxical phenomenon. This may, in part, explain the fact that ACEI only use was not favorably associated with any clinical outcomes in our study and also may explain why an increased risk of recurrence with the ACEI use was found in the LACE study. Of note, ARB use was reported to be associated with increase in overall cancer incidence[32], although this has not been validated in subsequently published studies[33-36].

There are some limitations to our study. Although our database was built prospectively, our study is prone to the bias inherent to a retrospective design and we cannot rule out residual confounding by unidentified clinical variables non-randomly distributed between the groups compared. We evaluated the use of ACEI/ARBs prescribed concurrently with NST. We have no data available on the use of these drugs after the definitive breast surgery. We could not evaluate medication compliance. Also, our medication data is solely based on medical records, not verified by outside pharmacy records. It is possible that differences in outcome were diluted by differences in adjuvant treatment including radiation, trastuzumab, and endocrine therapy. However, there is no reason to believe that misclassification, residual confounding or lost-to-follow up occurred in a differential manner between ACEI/ARB and non- ACEI/ARB group.

Our findings are based on one of the largest available breast cancer neoadjuvant chemotherapy databases. Clinical information was collected in a prospective way and all patients were treated in a single institution with relatively homogenous chemotherapeutic regimens and surgical and radiation treatments. We were able to account for most known clinical variables that may affect clinical outcome when assessing the effect of ACEI/ARBs in breast cancer patients receiving NST. We also controlled for metformin and beta-blocker use as we previously demonstrated an association between them and pCR and OS, respectively[24, 26], although other mediation data including aspirin has not been collected[37].

In summary, this study provides the first report that ACEI/ARB use during NST is not associated with pCR rates in breast cancer patients receiving antracyline-and taxane-based NST. However, we found that ARB use, not ACEI, may be linked with favorable RFS. Given the fact that a number of breast cancer survivors with hypertension are on ARBs, this finding harbors vast public health implications and require validation in a larger prospective cohort.

This work was supported in part by 2P30 CA016672 and the Nellie B. Connally Breast Cancer Research fund.

All authors disclose no financial conflicts.