Taxanes are among the drugs most commonly used for preoperative chemotherapy for breast cancer. Taxanes induce mitotic arrest and subsequent apoptosis. The spindle-assembly checkpoint (SAC) is known to be activated during mitosis, along with cyclin-dependent kinase-1 (CDK1), and is required for taxane-induced cell death. We hypothesized that CDK1 activity predicts response to taxane-containing chemotherapy.

Development of methods to predict tumor response to particular types of preoperative chemotherapy might be of great benefit to patients with primary breast cancer because it could spare them unnecessary treatment and the associated toxic effects. To date, two main biological approaches have been used to try to predict the sensitivity of breast cancer to chemotherapy—genomic expression analysis (multiple genomic expression analysis or gene expression signatures) 3-8 and cultivation of resected tumor tissues with chemotherapeutic agents (so-called chemotherapy sensitivity and resistance assays [CSRAs]).9-12 However, neither expression profiling nor CSRAs fully meet the requirements for clinical application yet—the robustness of the predictive performance of multiple genomic analyses among various cohorts studies remains uncertain, and CSRAs have not been prospectively evaluated in clinical trials.

Taxanes (paclitaxel and docetaxel) are among the drugs most commonly used for preoperative chemotherapy for breast cancer.13 Taxanes specifically bind to tubulin and stabilize microtubule polymerization, resulting in arrest of the cell cycle at the G2/M phase and consequently cell death, mostly via apoptotic pathways. In the G2/M phase, the spindle-assembly checkpoint (SAC) is normally activated to secure the mitotic process.14 Various mitotic checkpoint regulators are the determinants of paclitaxel response.15,16 In a previous report, we showed that activation of the SAC is required for paclitaxel-induced cell death.17 Cyclin-dependent kinase-1 (CDK1), which is known to be a master kinase for cell cycle processes, also plays a key role in the mitotic process. The activity of CDK1 is maximized when the SAC is activated. Premature activation of CDK1 is known to be required for apoptosis induction by paclitaxel.18,19 Thus, we previously hypothesized that the functionality of the SAC can be assessed by measuring CDK1 activity and that CDK1 activity can be used as a predictor of paclitaxel sensitivity.20 Preclinical in vitro and in vivo experiments using breast cancer cell lines and xenograft mouse models showed that in cell lines sensitive to paclitaxel, CDK1 activity increased significantly after paclitaxel incubation, whereas in cell lines resistant to paclitaxel, CDK1 activity was unchanged after paclitaxel incubation, supporting our hypothesis.20 On the other hand, previous study reported that CDK2 activity, critical in the transition of the cell cycle at G1/S phase, do not alter at 24 hr after paclitaxel treatment to the baseline in breast cancer cell lines 21. Our preclinical in vivo experiment agrees with the above observation of CDK2 activity levels20 and CDK2 activity was used to normalize the activity of CDK1. Therefore, we hypothesized that the relative activity of CDK1 normalized by CDK2 activity (CDK 1/2-AC) could be a parameter for paclitaxel sensitivity.

We validated the results of our preclinical study. We conducted a prospective study to determine whether CDK activity predicts taxane sensitivity in breast cancer patients. We previously established a sophisticated technology, termed cell-cycle profiling (C2P) technology, to quantify the kinase activity and expression level of multiple proteins relevant to the cell cycle, including CDKs, in a simultaneous and multiparallel way.22 Using the C2P technology, we successfully predicted breast cancer recurrence in Japanese and Caucasian cohorts by measuring CDK1 and CDK2 specific activities.23,24 In this study, we used the C2P technology to assess CDK activity and analyzed the relationship between CDK activity and clinical response of breast cancer to taxane-containing chemotherapy.

Patient Enrollment and Selection for Analysis

Patients in this study were enrolled in an ongoing pharmacogenomic marker discovery program (LAB-99-402) conducted in patients with primary breast cancer at The University of Texas MD Anderson Cancer Center. LAB-99-402 is open to patients with a newly discovered palpable breast lump who are scheduled to undergo diagnostic core or fine-needle aspiration biopsy. In addition to enrollment in LAB-99-402 between 2004 and 2007, inclusion criteria for the study reported herein were diagnosis of primary invasive breast cancer and eligibility for preoperative chemotherapy. Any previous chemotherapy for the current breast cancer excluded a patient from our study. Of the patients in LAB99-402, a total of 60 patients met the inclusion criteria for our study.

This study was approved by the institutional review boards of MD Anderson Cancer Center and Sysmex Corporation. All patients gave informed consent for voluntary participation.

Study Design and Evaluation of Response to Taxane-containing Chemotherapy

This was a prospective study in breast cancer patients who received 6 months of preoperative chemotherapy consisting of paclitaxel-containing treatment (80 mg/m2 weekly) or docetaxel-containing treatment (100 mg/m2 every 3 weeks) for the initial 3 months followed by fluorouracil-epirubicin-cyclophosphamide or fluorouracil-doxorubicin-cyclophosphamide for the second 3 months. Before starting preoperative chemotherapy, patients were asked to undergo fine-needle aspiration biopsy of the primary breast tumor. Also, the longest diameter of the primary tumor and its orthogonal diameters were measured by ultrasonography.

At the completion of taxane treatment, the clinical response was evaluated and classified according to the following definitions: Complete response (CR) was defined as the absence of all clinical evidence of active tumor in the breast and lymph nodes. Partial response (PR) was defined as a more than 50% reduction in the product of the perpendicular diameters of the measurable lesion(s) without progression of any lesion or appearance of any new disease. Stable disease (SD) was defined as no change or reduction in tumor measurements insufficient to qualify as a PR. Progression of disease (PD) was defined as a more than 25% increase in the size of any tumor and/or the appearance of new lesions. After completing preoperative chemotherapy, patients underwent breast-conserving surgery or mastectomy.

Measurement of CDK Activity in Tumor Samples Incubated with Paclitaxel

It is known that fine-needle aspiration (FNA) samples contain in tumor cells, few lymphocytes and stromal cells.25 Therefore, in this study, tumor samples were obtained by FNA before the administration of any preoperative chemotherapy. Following the sample collection, the samples were immediately incubated in paclitaxel solution containing 100 nM paclitaxel in medium with 2% FBS for 24 hr at 37ºC. This has been reported to be the lowest cytotoxic concentration of paclitaxel that was clinically relevant 26, and exposure to 100 nM paclitaxel for 24 hr blocked a majority of the cells, which are sensitive to paclitaxel, into the mitotic phase in in vitro experiment.20 After incubation, samples were washed and pellets were stored at -80ºC until the measurements of CDK1 and CDK2 enzymatic activities. The CDK activity was measured by previously reported methods.22 On the other hand, in regard to CDK expression, the amount of tumor samples obtained by FNA was not enough for the measurement of CDK expression.

The ratio of CDK1 activity to CDK2 activity (CDK1/2-Ac) was used as the index of SAC functionality. The cut-off values of CDK1/2-AC were deduced by receiver operating characteristic (ROC) analysis. Patients with clinical CR or PR were defined as having sensitive disease. Each response rate was calculated by dividing the number of sensitive cases by all examined cases.

Cross-tabulations of categorical variables (e.g., response to taxane-containing chemotherapy vs. SAC functionality) were provided, and associations were assessed using Fisher's exact test. Univariate logistic regression was used to assess the utility of SAC functionality in predicting clinical and pathologic response to taxane-containing chemotherapy. All tests were two-sided, and P values of .05 or less were considered statistically significant. Statistical analysis was carried out using MedCalc version 10 (MedCalc Software, Belgium).

The demographic, clinical, and pathologic features for patients in the clinical response prediction and pathologic response prediction analysis sets are listed in Table 1. Of the enrolled 52 patients for analysis, there were some cases with no CDK2 activity measurable in our study. One possible explanation is that the biopsy samples might have low or zero percent of cycling cells when both CDK1 and CDK2 were not detectable. Another possibility is that CDK1 or other kinase might take over CDK2 function in the cells whose CDK2 activity was not detectable but CDK1 activity was detectable, suggesting that CDK2 might not be essential for cell cycle in these breast cancer cells. The latter hypothesis is supported by a previous report that CDK1 can compensate for CDK2 loss in most cell type.27 In either case, patients who showed no CDK2 activity were excluded from the analysis because we will not be able to obtain a CDK1/2-AC ratio. Therefore, for prediction of clinical response, 17 patients were excluded, leaving 35 of the initial 52 patients available for the final analysis.

*All values are number (percentage) of patients unless otherwise indicated.

In the analysis set for clinical response (35 patients), 26 patients showed sensitivity to taxane-containing preoperative chemotherapy (2 CR and 24 PR), and 9 patients showed resistance (7 SD and 2 PD). These patients were defined as the sensitive and resistant groups, respectively. The distribution of the CDK1/2-Ac values between the sensitive and resistant groups was separated (analysis of variance, P = .077, Figure 1). This tendency was strongly in agreement with our preclinical findings that cell lines sensitive to paclitaxel had increased CDK1 activity after paclitaxel incubation, whereas cell lines resistant to paclitaxel had no obvious CDK1 activity alteration after paclitaxel incubation.20 The ROC analysis showed a prediction capability of CDK1/2-Ac, within an area under the curve of 0.720 when the cut-off was set to be 0.55 (P = .0087, 95% confidence interval: 0.54-0.86).

On the basis of this cut-off value, 18 patients having higher CDK1/2-Ac values were classified as the SAC function group, and 17 patients having lower CDK1/2-Ac values were classified as the SAC dysfunction group. CDK-based SAC functionality was a significant predictor of clinical response to taxane-containing chemotherapy (chi-squared test, P = .0072, sensitivity = 65.4%, specificity = 88.9%, positive predictive value [PPV] = 94.4%, negative predictive value [NPV] = 47.1%, and overall agreement = 71.4%, Table 2). Comparison of the point estimation of the clinical response rate between the SAC function and SAC dysfunction groups evaluated with chi-squared test showed a difference (P = .0155, Table 3). 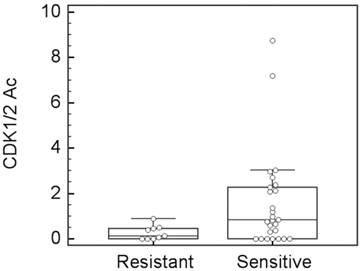 Many clinicopathologic parameters were examined in this study. CDK-based functional SAC was the only clinicopathologic factor that correlated significantly with clinical response (Table 4). Nuclear grade were moderately correlated with clinical response. Since all patients with estrogen-receptor-positive or progesterone-receptor-positive status were sensitive to taxanes, odds ratios could not be calculated for those factors. HER2 status was not included in the analysis since there was only 1 HER2-positive patient in this analysis set.

We found in this study that SAC function correlated with clinical response to preoperative taxane-containing chemotherapy (P = .0072, PPV = 94.4%, NPV = 47.1%, and overall agreement = 71.4%). Logistic regression analysis with conventional clinicopathologic factors showed that SAC functionality was the only factor significantly associated with clinical response. These findings indicate that patients with SAC function have statistically significantly higher probability of clinical response to taxane treatment (94.4%; 17 of 18 patients) than the patients with SAC dysfunction (52.9%; 9 of 17 patients, P =0.015). On the other hand, the overall rate of resistance to taxane chemotherapy in this cohort was 25.7% (9 of 35 patients), and the resistant population was enriched more than 1.8-fold (47.0% vs. 25.7%) by segregating patients on the basis of SAC dysfunction. Moreover, it is possible that improvement of the accuracy of predicting non-responder by SAC contributes to avoid non-essential medication and to improve the quality of life in breast cancer patients. For the patients with SAC dysfunction, other preoperative chemotherapies could be considered as an alternative.

CDK activity measured by our method successfully predicted sensitivity to taxane-based chemotherapy, strongly suggesting that this CDK-based assessment may reflect the functionality of the SAC in human tumor tissues since SAC activation is closely related to taxane sensitivity.17 This SAC functionality assessment via CDK activity is a unique mechanism-based rational approach to predict sensitivity to taxane-based chemotherapy. Several other rational approaches to sensitivity prediction are so far known.28 These rational approaches, including ours, should ideally be developed alongside the development of multigene predictors to maximize clinical benefit for patients.

In conclusion, we have shown that SAC functionality assessment by CDK activity is a novel method for predicting the sensitivity of HER2-negative breast cancer to taxane-containing preoperative chemotherapy. We are currently conducting a large prospective clinical study in breast cancer patients using Mammotome biopsy to clinically validate the findings of this study.