The impact of consolidation on response rates and PFS has recently been demonstrated after induction and autotransplantation upfront in Multiple Myeloma (MM). We further showed that patients in ≥VGPR following the intensification procedure benefited most from consolidation. Question remains as to the benefit of consolidation for patients in PR at completion of induction - feature of partial resistance to the induction regimen.

We collected data from 54 newly diagnosed MM treated with VTd-auto-VTd regimen that reached only PR at completion of the induction procedure.

This study shows that VTd consolidation should be recommended to patients solely on PR at completion of induction with VTd, feature of lower sensitivity to VTd.

The high-dose therapy plus autologous stem cell transplantation (ASCT) procedure following a debulking induction regimen remains the standard of care for transplant eligible patients with multiple myeloma (MM) upfront [1-3]. Achievement of complete response (CR) or at least very good partial response (VGPR) at the end of the ASCT procedure was considered one of the key features for improved outcome [4-6]. Nevertheless, MM remains an incurable disease, characterized by a high relapse rate, and several strategies were developed to increase the VGPR plus CR rate, including improvements in the induction regimen and the recent development of the concept of consolidation and/or maintenance phases post ASCT [3, 7].

We and others have recently demonstrated the impact of consolidation on response rates and progression free survival (PFS) after induction and ASCT in MM upfront [8, 9]. We have thus showed that patients in ≥VGPR following the intensification procedure benefited most from consolidation [10]. We observed that patients in CR at completion of consolidation had a greater median TTP (95%CI) : not reached versus (vs) 27 months (25;29) for VGPR, respectively (p<0.0001), and less than 16 months for patients with PR and lower responses. Several questions remain regarding the consolidation phase, the number of cycles, whether all patients should receive consolidation, and when a tandem ASCT would improve the efficacy of consolidation.

It seems logical to use a similar regimen in consolidation as in induction if the patient reached at least VGPR - as a marker of the sensitivity of myeloma clones to the treatment regimen, although one might consider complete response as the sole marker of the sensitivity of tumoral cells to drugs - and also because the safety profile of the regimen would then be known to the patients at time of consolidation. On the other hand, it seems more controversial whether the consolidation-based regimen should be the same regimen as in induction in patients that solely reached PR at completion of the induction - patients presenting indeed with features of partial resistance to the induction regimen.

We aimed to assess the efficacy and safety of VTd as consolidation therapy in patients that reached solely PR at completion of induction with VTd regimen, followed by a single ASCT (VTd-auto-VTd regimen).

Patients. This retrospective multicentre study has included 121 newly diagnosed MM patients eligible for ASCT upfront and aged less than 65 years, from 2009 to 2011, across 9 IFM centers. Patients were treated with VTd-auto-VTd regimen (VTd-auto-VTd), which consisted of 4 induction cycles and 2 consolidation cycles of VTd [bortezomib I.V. 1.3 mg/m² on days 1, 4, 8, and 11, thalidomide 100 mg/day administered orally, and dexamethasone 40mg weekly administered orally]. All patients underwent ASCT with high dose melphalan 200mg/m² as conditioning regimen. The patients must have completed the procedure.

We then focused on the 54 patients that reached PR at completion of VTd induction.

The study was approved by the ethics committee of CHRU of Lille, France and was conducted in accordance with the principles of the Declaration of Helsinki.

Statistical Analysis. Descriptive data were collected for all patients. All response rates were determined according to IMWG criteria [11]. Duration of response was calculated from the date of the first response to the date of progression. All survival end points were evaluated through the Kaplan-Meier estimates and compared through the Log-rank test. The estimate of the relative risk of event, and its 95% confidence interval (95%CI) were estimated through proportional hazard model. All analyses were done with the SPSS 15.0 software.

Patients characteristics in the global cohort of 121 patients and specifically in the extracted cohort of 54 patients that solely reached PR at completion of induction.

Response rates at completion of consolidation according to responses after ASCT in patients that solely reached PR after induction (N = 54).

Consolidation decreased the relapse rate and improved survival free of myeloma in our series. With a median follow-up of 36 months, 30% and 11% of patients had relapsed and died in this series, respectively. As expected, the relapse rate was 41% and 11% for patients that did not further improved the depth of response versus those that improved at completion of consolidation (p=0.027). This difference was even more striking when it came to compare the patients that reached CR at completion of consolidation versus the others, 8% and 38%, respectively (p=0.039). Amongst patients that remained on PR after ASCT, 36% of patients relapsed versus 19% in patients that further improved depth of response following ASCT (p=ns).

The median TTP was not reached for the cohort as a whole, and the 3-year TTP was 75%. The median TTP was prolonged in patients that further improved depth of response after ASCT versus those who remained on PR after ASCT, without reaching significance. The median TTP was 26 months (95%CI 13-38) in patients that did not benefit from consolidation versus not reached yet for the second group (p=0.012), with a 3-year TTP of 18% and 87%, respectively (Figure 1A) ; and 26 months (95%CI 20-31) versus not reached yet for patients who did not reach CR versus those who reached CR at completion of consolidation (p=0.034), with a 3-year TTP of 31% and 88%, respectively (Figure 1B). The PFS showed similar trends as to the TTP (data not shown). The median OS was not reached in all groups, and the 3-years OS was approximately 75%.

These data speaks to the importance of ASCT and consolidation to improve the depth of response as it correlates to a lower relapse rate and prolonged TTP and PFS, irrespective to the response at induction, PR or better. This should however be confirmed in larger studies, given that these data concern only 54 patients.

Median TTP at completion of consolidation phase according to (A) improved depth of response; (B) obtaining CR. 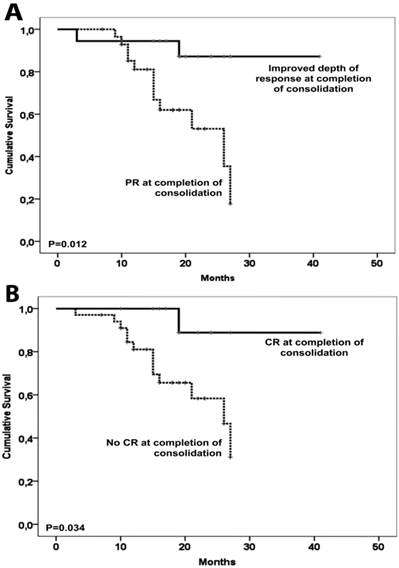 The main goal of post-ASCT consolidation is to improve the quality (the depth) of the response achieved with induction therapy and high-dose melphalan, with the objective to improve the CR rate prior to stop treatment or to start maintenance depending on countries. The improved quality (depth) of response at completion of consolidation then prolongs the duration of the first response, further delaying relapse and allowing an extension of the progression-free survival (PFS). Possibly, future studies will demonstrate a prolonged overall survival (OS) with longer follow-up.

Prior to the availability of novel agents, the main consolidation strategy was the use of a second ASCT in a tandem fashion [3, 12], proposed particularly to patients that did not reached VGPR at completion of ASCT. More recently, novel agents have been assessed as consolidation therapy post-ASCT [9]. Cavo and al. confirmed these findings, showing an increased CR rate from 49% to 61% after consolidation, and a prolonged PFS, with two cycles of VTd compared to 2 cycles of Td, but in the context of a tandem ASCT procedure upfront [8]. Other studies have been conducted since, and found similar results in terms of improved quality of response and prolonged PFS after consolidation with immunomodulatory drugs or bortezomib based associations. Upgraded rates of CR and CR-nCR have indeed been reported with post-ASCT use of monotherapy with bortezomib or lenalidomide [13, 14], or VTd as consolidation [8-10]. The consolidation strategy remains however a matter of debate in the field of myeloma upfront in transplant eligible patients. It is especially not yet determined whether consolidation should be offered to all patients or a particular group of patients. Previous studies indeed suggest that consolidation benefits most to patients who have already obtained a very good partial response or better after induction and ASCT, that is to say, patients who showed good sensitivity to chemotherapy [8, 10]. However, no data was available regarding the role of VTd consolidation in the context of patients poorly sensitive to bortezomib-triple based VTd induction regimen followed by a single ASCT.

We did not find any unexpected adverse event, and there were no excess of toxicity with VTd consolidation in this population of patients less responsive and that one might have considered more frail. The most frequent adverse events were hematological toxicity, neuropathy and thrombo-embolic events, at acceptable rates, and with no increased incidence during consolidation and no known safety concern of long term treatment-based toxicity such as the occurrence of secondary primary malignancies (SPMs).

Overall, several studies have demonstrated the benefit of a novel agent-based consolidation therapy post ASCT in multiple myeloma, but the optimal consolidation regimen remains to be determined. Further trials are currently addressing this question such as the BMT CTN 0702 phase 3 study, that randomized patients after a first ASCT to either no consolidation, consolidation with novel agents, or a second ASCT.

This study showed an improved response rate in relation to the VTd consolidation phase in 68% of patients that only partially responded to the VTd induction regimen, with a lower relapse rate and a prolonged PFS. This study demonstrates that VTd consolidation in the context of a VTd-auto-VTd regimen upfront should be recommended to all responders, including patients in PR characterized with a lower sensitivity to the VTd regimen. This is a further step in the optimization of novel agents, focused on achieving extended remissions and longer survival for patients with multiple myeloma.