Association between APE1 Single Nucleotide Polymorphism (rs1760944) and Cancer Risk: a Meta-Analysis Based on 6,419 Cancer Cases and 6,781 Case-free Controls

Apurinic/apyrimidinic endonuclease 1 (APE1, also known as APEX, HAP1, and REF-1) is a multifunctional protein and plays a central role in the base excision repair (BER) pathway [1]. The human APE1 is located on chromosome 14q11.2 and consists of five exons, spans roughly 2.5 to 3 kb of DNA [2, 3]. Besides its role in DNA repair, APE1 is also known as a transcriptional coactivator for numerous transcription factors, such as AP-1, HIF-1α, p53 and NF-κB, which are involved in cancer promotion and progression [4]. APE1 represents a promising target for pharmacological treatment in some cancer types [3, 5].

Up to now, Epidemiologic studies suggested single nucleotide polymorphisms (SNP) in APE1 may confer individuals' susceptibility to cancer [6, 7]. A total of 18 SNPs in APE1 have been identified [2], of which, two functional SNPs (- 656 T> G in the promoter region, rs1760944 and 1349 T> G in the fifth Exon, rs1130409) have been wildly investigated [8]. It was reported that APE1 rs1760944 T>G polymorphism was associated with altered promoter activity in vitro [9]. Furthermore, the rs1760944 G allele was associated with the decreased risk of lung cancer by enhancing the transcriptional activity, compared with that of the T allele [9]. The results suggested that the rs1760944 G allele in the promoter region was associated with an increased transcriptional activity of the APE1 gene [10].

Lo et al. and Lu et al. reported that - 656 T > G polymorphism influenced the transcriptional activity of APE1 and contributed to lung cancer susceptibility [9, 11]. Some other studies in breast cancer, prostate cancer, and lung cancer also supported the association [12-14], however, it has not been replicated in one study in renal cell carcinoma [15].

Computer searches were carried out independently by two authors, in PubMed, ISI Web of Knowledge, Embase, Chinese National Knowledge Infrastructure (CNKI) Data (the latest research was retrospected to September 2013) to collect articles with case-control or cohort studies related to the association of APE1 rs1760944 polymorphism and cancer risk.

Accordingly, the following exclusion criteria were also used: (1) the design of the experiments were not case-control studies; (2) the source of cases and controls, and other essential information were not provided; (3) the genotype distribution of the control population was departure from HardyeWeinberg equilibrium (HWE); (4) reviews and duplicated publications.

Articles were performed independently by two reviewers and data with discrepancies in identification were discussed by all authors. For each included study, the following information was collected: first author, year of publication, country of origin, ethnicity, source of control, numbers of cases and controls, genotyping methods for APE1 rs1760944 T/G, total number of cases and controls as well as number of cases and controls with T/T, T/G and G/G genotypes. Different ethnicity descents were categorized as Caucasian, Asian, African, and “mixed”. All the case and control groups were well controlled. The non-cancer controls had no history of gynecologic disease, and there was no present evidence of any malignant disease. When studies included, subjects of more than one ethnicity, genotype data were extracted separately according to ethnicities for subgroup analyses.

The associations between APE1 rs1760944 polymorphism and cancer risk were measured by odds ratio (OR) with 95% confidence interval (CI). The significance of the pooled OR was determined by the Z test. Statistical heterogeneity among studies was assessed with the Q and I2 statistics. The Q test and I2 were claimed to test the variation which was due to heterogeneity or by random error. When P value of heterogeneity tests was no more than 0.1 (P≤0.1), we used random effects model. When P value of heterogeneity test was more than 0.1 (P≥0.1), we used fixed effects model. Sensitivity analysis was also tested by removing one study at a time to calculate the overall homogeneity and effect size. Publication bias were evaluated by the funnel plot and further assessed by the method of Egger's linear regression test. All statistical analyses were carried out with the review manager version 5.0 (Revman; The Cochrane Collaboration, Oxford, UK) and the Stata software version 10.0 (Stata Corporation, College Station, TX, USA). All P values in the meta-analysis were two-sided, and P value less than 0.05 were considered significant.

As shown in Figure 1, a total of 21 records that fulfilled our search criteria were preliminarily identified for further detailed evaluation, of which excluded 10 articles. Three studies were excluded because the designs of the experiments were not case-control studies. Two studies were not focused on APE1 rs1760944 polymorphism and breast cancer risk. Two studies was excluded because no detailed genotyping data. One was laboratory study, and the rest of the four studies were systematic review comments. Finally, 12 studies from 11 articles on APE1 rs1760944 genotypes and cancer risk were identified [9-15, 17-20], including a total of 6,419 cancer cases and 6,781 case-free controls. The characteristics of the included studies are listed in Table 1. 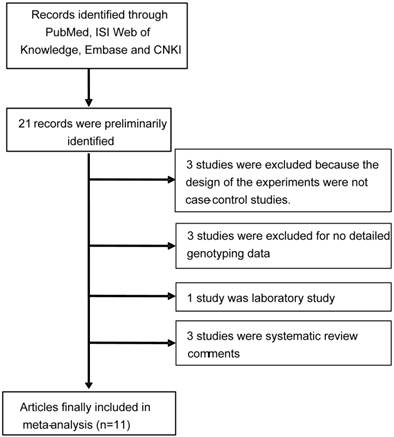 Characteristics of the studies included in the meta-analysis.

Begg's funnel plot and Egger's test were performed to assess the publication bias. As show in Figure 5, the funnel plots did not reveal any obvious asymmetry in all genotypes in overall population, and the results of Begg's test revealed no publication bias (P>0.05).

Forest plots of APE1 rs1760944 polymorphism and cancer risk in the overall population (TG+GG vs TT). The squares and horizontal lines correspond to the study specific OR and 95% CI. The area of the squares reflects the weight (inverse of the variance). The diamond represents the summary OR and 95% CI. 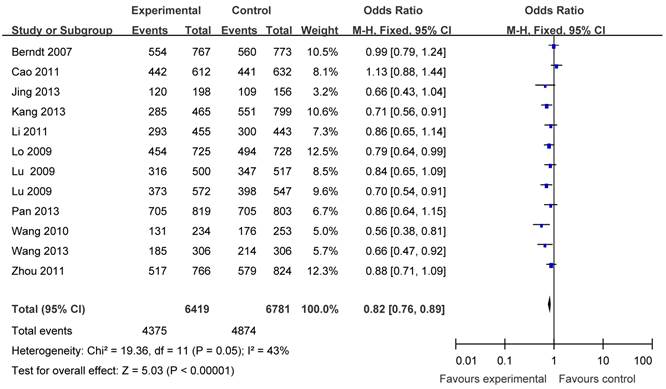 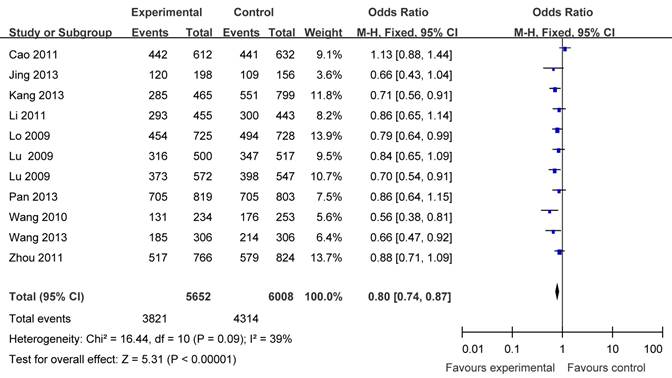 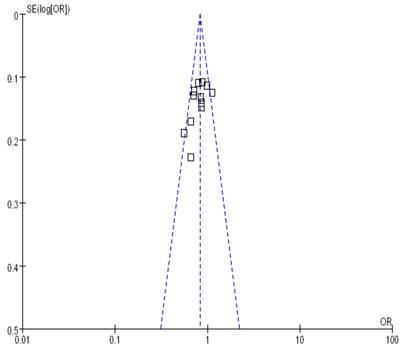 Human DNA repair systems play an important role in protecting the genome from DNA damage caused by endogenous and environmental agents [21]. The base excision repair (BER) pathway removes DNA damage caused by ionizing radiation, reactive oxidative species and methylating agents [22]. APE1 is a multifunctional protein and plays a central role in the BER pathway [3]. Polymorphisms in the DNA repair genes may contribute to the DNA repair capacity variations in the general population. Previous studies suggested the APE1 polymorphisms could influence the sensitivity to ionizing radiation [23].

Aberrant expression of APE1 gene may lead to defects in repairing these lesions and confer individuals' susceptibility to the cancer. For instance, there are some studies that suggested polymorphisms in APE1 may regulate its expression and influence individual's susceptibility to cancer [9-13]. APE1 rs1760944 might act as an important role in the prediction of gastric cancer survival [24]. Epidemiological studies have now linked genetic polymorphisms in APE1 with the risk various types of cancer including lung cancer, breast cancer, colorectal cancer and bladder cancer [7].

The relationship between APE1 rs1760944 polymorphism and cancer was inconsistent [12-15]. In this meta-analysis, we pooled all 12 eligible case-control studies to estimate the overall cancer risk of the APE1 rs1760944. We found that APE1 rs1760944 T>G variant had a significantly decreased risk of cancer in overall population.

In the subgroup meta-analysis based on ethnicity, compared with T allele, a significantly decreased cancer risk is associated with G allele in Asian. Furthermore, compared with TT genotype, a significantly decreased risk of cancer is associated with TG genotype, GG genotype and the combined TG/GG genotypes subgroup. However, there were only one study based on Caucasian background and no study based on African among the eligible studies. Further investigations on large scale on Caucasian and African populations are needed to verify this result.

Some limitations of this meta-analysis should be noted. Firstly, this meta-analysis was based on pooled data and no individual data was available; thus, we could not assess the risk of cancer according to stratification of age, environment factors, and other risk factors of cancer. Secondly, small study effect, in which effects reported in small studies are larger, could not be avoided in that some studies were of a relative small size (<5,00 ). Moreover, further large scale multicenter studies with more detailed individual data, with different environmental background are warranted to further validated gene-gene and gene-environment interactions on APE1 rs1760944 polymorphism and cancer risk.