The incidence rate of esophageal adenocarcinoma (EAC) has increased rapidly in the United States and other Western countries [1-3]. EAC is the most frequent human esophageal malignancy in the US. Risk factors of EAC include male gender, obesity, gastroesophageal reflux disease (GERD), smoking, and low fruit and vegetable intake [4-7]. Although Barrett's esophagus is the major risk factor for the development of EAC, the molecular underpinnings during EAC development and progression are still largely unknown.

Recent evidences demonstrated that hypermethylation of the gene promoter CpG island, alone or in coordination with other genetic or epigenetic mechanisms, is one of the major mechanisms in silencing tumor suppressor genes [8, 9] as well as others which are associated with key oncogenic functions such as angiogenesis, invasion, metastasis, and progression. Cell-cell adhesion plays a critical role in cancer invasion and metastasis. Loss of cell adhesion and alterations in the expression of cadherins are common features of tumor cells and markers for aggressive tumor growth and poor prognosis [10, 11]. Desmocollin3 (DSC3) is a member of the cadherin superfamily of calcium-dependent cell adhesion molecules and a principle component of desmosomes. DSC family members are uniquely expressed in epidermal tissue, with DSC3 mainly present in the basal and spinous layers [12]. One of the more intriguing functions of desmosomal proteins, as they relate to cancer, is their ability to inhibit cell motility [13, 14]. Down-regulation of DSC3 was reported in colorectal cancer and skin tumor [15, 16], possibly through epigenetic mechanisms and/or regulation by p53 [17]. In this study, we demonstrated that frequent loss of DSC3 in EAC cell lines and primary tumor tissues is mediated by aberrant cytosine methylation of promoter regions. Furthermore, we investigated the effect of demethylation on EAC cell lines and confirmed that demethylation treatment can restore DSC3 expression. Our results indicated that epigenetic silencing of DSC3 is a molecular event in esophageal adenocarcinomas that is progressive with advanced stages of the disease.

All frozen tissue samples were obtained from the National Cancer Institute Cooperative Human Tissue Network and the archives of pathology at Vanderbilt University (Nashville, TN, USA). The use of de-identified archival tissue samples was approved by the Vanderbilt institutional review board. Histopathological diagnosis of the EACs was verified based on hematoxylin and eosin stained sections according to the Vienna classification of gastrointestinal epithelial neoplasia [18]. The patient ages ranged from 42-78 years (median at 62.4 years). The samples included 46 EAC and 30 normal esophageal squamous mucosa tissue samples. The adenocarcinomas ranged from well-differentiated to poorly-differentiated, stages I-IV, with a mix of intestinal- and diffuse-type tumors.

DNA from cell lines and the frozen primary tissue samples were purified using a DNeasy tissue kit (Qiagen). The bisulfite modification of the DNA was performed using an EZ DNA Methylation-Gold Kit (ZYMO Research, Orange, CA, USA), according to the manufacturer's protocol. A 20 ng aliquot of modified DNA was subjected to polymerase chain reaction (PCR) amplification of the specific promoter region containing a CpG island, by using of a primer set designed using PSQ assay design software (Qiagen), where one of the primers was biotin labeled. The primer set does not include CpG site that enables us to amplify both methylated and unmethylated sequences of the DSC3 gene. The primers were designed [Forward] AGGGGAGTGGGAGAATTGGT, [Reverse] CCTACCCCAAAACAACTTCACTTCT. Platinum PCR SuperMix High Fidelity (Invitrogen) was used to prepare the PCR solution. PCR products were checked by gel electrophoresis to confirm the size of the products and rule out the formation of primer dimers. Quantitative pyrosequencing analyses were done using Biotage PyroMark MD system (Qiagen) following the protocol provided by the manufacturer. The results were analyzed by Pyro Q-CpG 1.0.9 software (Qiagen). Based on control normal samples and internal quality controls provided in the software analysis, we used a 10% DNA methylation level as a cutoff for identification of DNA hypermethylation [20, 21].

For validation of the role of epigenetics in transcriptional regulation of DSC3 in vitro, esophageal cancer cell lines FLO-1 and SKGT4 were used. Cells were maintained in Dulbecco's modified Eagle's medium (DMEM), supplemented with 10% fetal bovine serum (FBS) and antibiotics (Invitrogen) as described above. Cells were seeded at low density for 24 hours and then treated with 5 μM 5-Aza-2'-deoxycytidine (5-Aza-2') (Sigma-Aldrich) for 72 hours and/or 200 nM Trichostatin-A (TSA) (Wako, Osaka, Japan) for 24 hours. Total RNA and DNA were isolated and purified by an RNeasy kit and DNeasy tissue kit (Qiagen), as described above. The DNA methylation levels of DSC3 CpG nucleotides of the promoter were determined by pyrosequencing before and after treatments. The DSC3 mRNA expression levels were determined by qRT-PCR, as described above.

The student t test was used to compare DNA methylation and mRNA expression between normal and tumor samples. The correlations between the DNA methylation level and mRNA expression fold were determined by Spearman Rank Correlation. All P-values were based on two-sided tests and differences were considered statistically significant when P-value≤.05.

The DSC3 gene has 16 exons with a CpG island located around its transcription start site (TSS, Figure 1). To study DSC3 gene expression and DNA methylation in esophageal adenocarcinoma, we have collected a panel of 10 cell lines originated from esophagus, including normal esophageal squamous epithelium (HET1A and HEEC), Barrett's esophagus (BART, CPA, and CPB) and adenocarcinomas (OE33, FLO-1, OE19, SKGT4, and JHU-Eso-Ad1). We first analyzed the expression of DSC3 in esophageal cancer cell lines by real-time PCR. We detected significant reduction in DSC3 mRNA expression in esophageal adenocarcinoma cell lines as compared to non-neoplastic esophageal cells (Figure 2A). The pyrosequencing analysis demonstrated significantly higher DNA methylation levels in 4 of 5 EAC cell lines as compared to the non-neoplastic cells (Figure 2B).

Frequency of DSC3 hypermethylation in normal and EAC samples.

DSC3 promoter CpG island and Pyrosequencing. A) A schematic chart shows DSC3 genomic structure. DSC3 has 16 exons as shown in black boxes. A CpG island with dense CpG sites is present from -400 to +200 bp relative to the transcription start site (TSS); each vertical bar represents one CpG site. Forward and reverse primers for Pyrosequencing assay PCR locate in the gap of CpG site and the 7 CpG sites sequenced is shown within green box. B) and C) Representative Pyrosequencing profile of the 7 CpG sites in a matched normal (B) and tumor (C) sample pair, showing DNA methylation level for each individual CpG site. 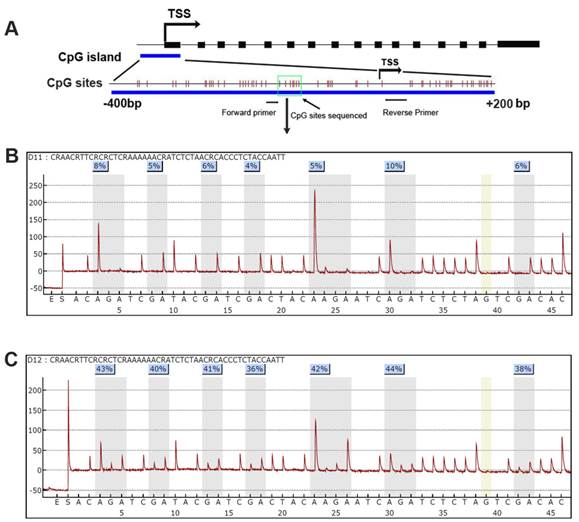 Because both DNA methylation and histone de-acetylation are epigenetic events that regulate gene expression at the promoter level, we checked whether interference with the activities of DNA methyltransferases, using 5-Aza-2', and/or histone deacetylases, using TSA, could restore the gene expression in esophageal adenocarcinoma cell lines. To confirm the epigenetic silencing of DSC3 gene expression, FLO-1 and SKGT4, which have DSC3 promoter hypermethylation and loss of DSC3 mRNA expression, were treated with 5-Aza-2' alone or in combination with TSA. The results show that treatment with 5-Aza-2' alone, and not TSA alone, led to significant restoration of DSC3 mRNA expression in both FLO-1 and SKGT4 cell lines (P<.001; Figure 5A and 5C). The expression of DSC3 was enhanced upon combination of 5-Aza-2' with TSA (P<.001; Figure 5A and 5C). These results suggest that promoter hypermethylation is the primary epigenetic event whereas histone de-acetylation has an added contribution to the regulation of DSC3 expression. In concordance with these results, the DSC3 promoter DNA methylation level decreased in FLO-1 (from 92.2% to 77.2%) and in SKGT4 (from 92% to 69%), respectively (Figure 5B and 5D). 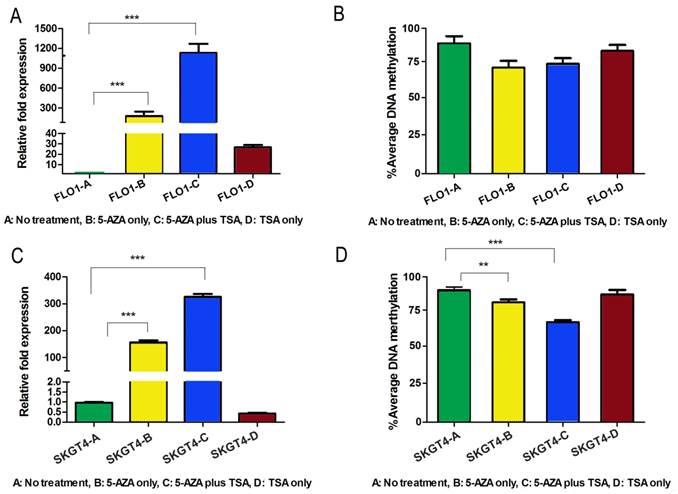 Esophageal adenocarcinomas are characterized by poor outcome, which is mainly attributed to the diagnosis of the disease at late stages with high occurrence of metastatic lesions and poor response to therapy. Although the molecular and genetic events underlying tumor metastasis are still not well understood, intense investigation into this process has led to the notion that genes and signaling pathways involved in cell adhesion and migration are critical in tumor invasion and metastasis [22]. Desmocollins are transmembrane glycoproteins and members of the cadherin superfamily of calcium-dependent cell-cell adhesion molecules. There are three DSC isoforms (DSC1-3); each is a product of a separate gene. The genomic organization of DSCs is similar to that of classic cadherins [23]. In this study, we analyzed the mRNA expression of DSC3 in esophageal adenocarcinoma cell lines and non-cancer esophageal epithelial cell lines. We found that the expression of DSC3 was significantly down-regulated or silenced in cancer cell lines as compared with non-cancer epithelial cell lines. We also confirmed that in human EAC tissues, DSC3 mRNA expression was significantly decreased compared with human normal esophageal tissues. Our results support earlier findings in other tumor subtypes, which have found down-regulation of DSC3 in breast cancer and colorectal cancer [17, 24]. To explore the mechanism responsible for the gene silencing in EACs, bisulfite methylation pyrosequencing was applied to quantify the DSC3 promoter methylation levels in the cell lines and normal and cancer tissues. The results demonstrated hypermethylation of DSC3 in almost all EAC samples with a strong inverse correlation between the DNA methylation and gene expression levels (r=-0.685). These data suggest that epigenetic promoter methylation is a possible regulatory mechanism of DSC3 gene expression in EAC. In fact, our results using 5-Aza and TSA confirmed the epigenetic regulation of DSC3 and suggested that DNA methylation plays a greater role in regulating the expression of DSC3 than histone de-acetylation. These results add to previous findings of DSC3 methylation in colorectal [25] and lung cancers [26-28]. Of note, in our assay, we detected DSC3 hypermethylation (> 10%) in all EACs except one (97.5%, 39/40) whereas none of the 22 (0%) normal esophageal epithelial samples showed DSC3 hypermethylation. These results suggest that DSC3 could serve as biomarker for Barrett's tumorigenesis and early detection of EAC; however, large cohort studies are needed to validate these primary observations.

Previous studies have observed that loss or reduction of desmosomes contribute to the development and/or the progression of various human epithelial cancers [29, 30]. Analysis of clinical-pathological data indicated that DSC3 prompter hypermethylation was highly correlated with advanced tumor stage and lymph node metastasis (P<.001). This finding is consistent with the known function of DSC3, which is a member of the cadherin superfamily of calcium-dependent cell-cell adhesion molecules. Similarly, loss of expression of DSC3 induced the progression of oral carcinomas and correlated with lymph node metastasis and cell proliferation [31]. Taken together, our results suggest that DSC3 could be a novel tumor suppressor gene with inhibitory functions in invasion and metastasis in EAC.

In conclusion, this is the first study reporting DNA hypermethylation and silencing of DSC3 in EACs. Further studies examining the functions of DSC3 in EAC are needed to uncover the mechanisms by which desmosomal signaling regulates cell migration, proliferation and other biological processes in EAC.

This study was supported by grants from the National Institute of Health; R01CA106176, Vanderbilt SPORE in Gastrointestinal Cancer (P50 CA95103), Vanderbilt Ingram Cancer Center (P30 CA68485) and the Vanderbilt Digestive Disease Research Center (DK058404); and Department of Veterans Affairs. The contents of this work are solely the responsibility of the authors and do not necessarily represent the official views of the National Cancer Institute, Department of Veterans Affairs, or Vanderbilt University.

All the authors declared no conflict of interest for the purpose of this study.

3. Pohl H, Welch HG. The role of overdiagnosis and reclassification in the marked increase of esophageal adenocarcinoma incidence. Journal of the National Cancer Institute. 2005;97:142-6 doi:10.1093/jnci/dji024