Materials and Methods: MRI method and MR-CAD method was used in the diagnosis of a total of 93 breast lesions of 78 patients, based on the morphological and time-intensity-curve (TIC) analysis. The accuracy of the two modalities in differentiating malignant and benign breast tumor was compared.

Conclusion: MR-CAD had a notable advantage over MRI in differential diagnosis of benign and malignant breast tumors, especially non-mass-like tumor.

Chinese women have a higher cancer incidence and mortality.(1) The imperfection of traditional breast imaging modality of mammography and color Doppler ultrasonography include the limited soft tissue resolution and spatial resolution, which might lead to misdiagnosis and underscore in clinical tumor staging. Enjoying its superior soft tissue contrast (2), high field magnetic resonance imaging (MRI) was reported to be an important modality in the diagnosis and staging of breast cancer. And some authors believe that breast MRI has high false positive rate which might lead to unnecessary surgical procedure. Furthermore, different MRI systems, different scanning protocols, and uneven diagnostic experience of breast radiologists will inevitably undermine the consistency of diagnosis of breast tumors (3). In recent years, a new MRI computer aided diagnosis (CAD) system has been put into clinical use. Compared with conventional MR diagnosis based on reading images on the workstation, MR-CAD system helped to improve diagnostic specificity while maintaining high sensitivity and eliminate the inconsistency of diagnostic interpretation between image readers (4,5). Herein, this study aimed at exploring the clinical value of MR-CAD in diagnosis of benign and malignant breast tumors.

The institutional review board approved this prospective study. Informed consent was obtained from all patients. From August 2010 to June 2011, a total of seventy-eight consecutive female patients (age range, 26-80 years, mean age, 47 years) with recently diagnosed breast tumor in our institution underwent MR examination. Ninety-three lesions were detected at routine MR examination. All lesions were greater than 0.8 cm in long-axis diameter. The diagnosis was confirmed by needle core biopsy (n = 13) and surgical histology (n = 80). MRI image analysis was performed on the integrated workstation and MR-CAD were used to differentiate benign and malignant lesions.

Three radiologists with over ten years of experience in MR imaging performed the image analysis on the integrated computer workstation without access to the final histologic results. Image analysis included the number, morphology and time intensity curve (TIC) pattern of breast lesion. Care was taken to include incidentally detected lesions in contralateral breast and exclude lesions less than 0.8 cm in long-axis diameter. All lesions were classified into mass-like lesion and non-mass-like lesion based on their shape, margin, distribution and pattern of contrast enhancement as illustrated in the following diagram (Figure 1).

Three radiologists independently draw six regions of interest (ROIs) in each lesion, covering as much enhancing portion as possible while excluding apparent cystic and necrotic component. For cystic lesions, the ROIs were placed at the enhancing margin. The TICs of lesions were classified into three types based on their trajectory: type one, persistently enhancing, type two, plateau, and type three, washout). The three radiologists independently made the diagnosis as to benignity or malignancy base on a comprehensive consideration of the morphologic characteristics, the enhancing pattern and the TIC type. When there was a divergence of diagnosis between radiologists, a consensus was reached by discussion.

MR-CAD was performed on the DynaCAD system (Ivivo, version 2.1.1). A voxel was considered to be significantly enhancing if its signal intensity of the first dynamic scan after contrast medium administration reached a assigned threshold by comparing with the pre-contrast scan and was given a certain pseudo-color and otherwise no pseudo-color produced. The pseudo-color assigned to a voxel was depended on the signal intensity change between the first and the last dynamic scan after contrast medium administration. If the last dynamic scan had signal intensity greater than the first for more than ten percent, the voxel was given “RED” which represent washout curve, and if less for more than ten percent, “BLUE” which represent persistent contrasting curve, and if between plus and minus ten percent, “GREEN” which represent a plateau type of curve (Figure 2). The pseudo-color on each slice gives the information as to pattern and range of enhancement. Furthermore, imaging subtraction, multi-planar reformatting (MPR) and maximum intensity projection (MIP) (Figure 3) was performed with DynaCAD system.

A patient with histologically proven infiltrative ductal carcinoma with a history of five years after right beast radical mastectomy. A non-mass-like lesion was identified in the inner upper quadrant of left breast, which was diagnosed as benign lesion based on morphological analysis by using dynamic contrast enhanced MRI (A~H indicating time serial dynamics) on workstation. 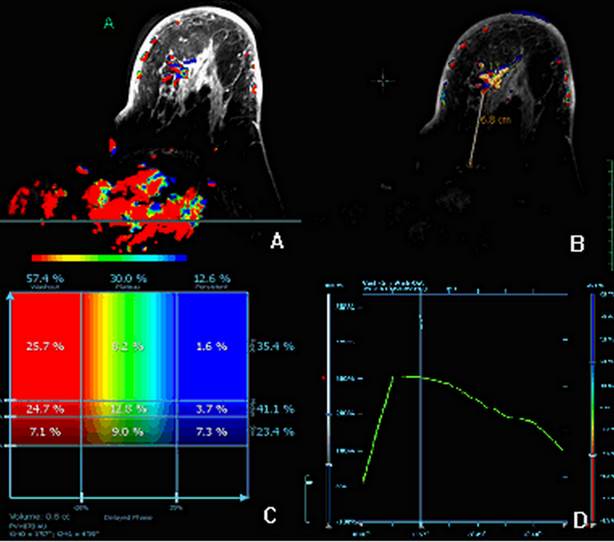 Same case with Figure 2. A diagnosis of malignant tumor was made by using MR-CAD, which revealed a good percentage of area of quick wash-in and wash-out within the lesion. 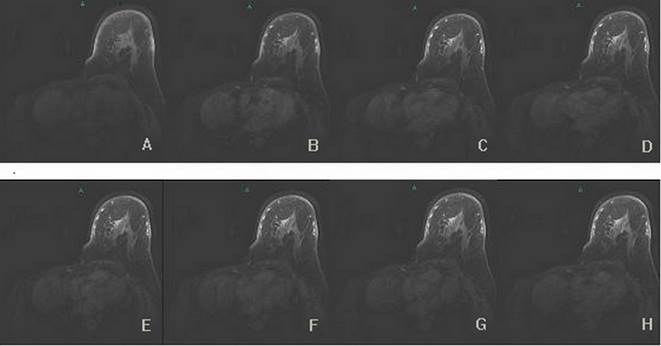 Since benign and malignant breast lesions may show resemblance in morphology, differentiation based solely on morphologic appearance is unreliable. Dynamic contrast-enhanced scan can provide more information helpful to diagnosis by facilitating detection of breast lesions and TIC characterization. In spite that three types of TIC (persistently ascending, plateau, and quick wash-out type) typically represent benign, possibly malignant, and definitive malignant lesion, there is still an overlap between benign and malignant lesions. Kuhl (6) et al. reported a positive predictive value of 6%, 12%, and 87% for the three types of TIC respectively. So TIC cannot guarantee a definitive diagnosis, but can of added value to morphologic analysis as to the differentiation between benign and malignant lesion.

Our study found that MRI method and MR-CAD method showed no difference in detection of breast lesions. This is due to the patient inclusion criteria excluded those lesion less than 0.8cm in diameter to eliminate impact of difference in sensitivity on the statistical analysis.

In the diagnosis of breast lesions, the morphologic and enhancement characteristics were firstly analyzed. A diagnosis of malignant lesion was made on the basis of prominent malignant signs such as lobulated and spiculated margin and apparent invasion of chest wall (7). A diagnosis of benign lesion was made on the basis of apparent benign signs such as a clear border, eccentric and homogeneous enhancement, presence of septa of low signal intensity and being hyper-intense on T2-weighted images. When the morphologic appearance was not typical, TIC characteristics is taken into consideration. MR-CAD analysis can reflect both the wash-in and the wash-out status of every voxel with the lesion. And according to different TIC types, a pseudo-color was given to the voxel. “RED” represent areas of definitively malignant tissue, “GREEN” represent areas of possibly malignant tissue, and “BLUE” represent possibly benign tissue. The analysis of TIC characteristics was usually performed subjectively and manually on workstation, and there might be a variant of diagnosis according to different ROI size and position, and moreover the wash-in status is usually neglected. This drawback can be overcome by MR-CAD, by which the analysis of wash-in and wash-out was performed automatically based on the pre-established threshold and was thus more objective. Former studies(8,9) showed that the accuracy of quantitative analysis was 86% and much better than qualitative assessment. MR is a useful diagnostic tool for fluid-containing mass.(10)

In this study, we showed that MR-CAD method was more accurate than MRI method for the 42 non-mass-like lesions. And for the typical mass-like lesions, the two methods yielded no difference in accuracy. The mass-like tumor are most pathologically invasive ductal carcinoma, which usually present typical morphology and TIC of malignant tumor and had lessened difficulty in diagnosis. Non-mass-like lesions include ductal carcinoma in situ (DCIS), invasive lobular carcinoma and papilloma, which may have a variant morphologic appearance and TIC type, causing difficulty in confident diagnosis. In the MR-CAD analysis, we found that malignant tumor usually had volume of quick wash-in and wash-out with a coverage of more than 10% of total volume, while for benign lesions, the percentage is usually less than 10%. When the morphologic appearance and the TIC curve analysis did not support a confident diagnosis, the percentage of volume representing different kinetics out of the total lesion volume may be of added value to reach a definitive conclusion. In contrast, manual TIC analysis is usually performed by one radiologist by positioning one or several ROIs to most suspicious site within the lesion. Poor repeatability is inevitable and an overall evaluation of the kinetics of the whole volume of lesion is unachievable.

This study was supported by Shandong Cancer Hospital Grant.