Methods: This study analyzed 377 eligible patients between June 2007 and December 2012. All patients enrolled in the study were newly diagnosed with stage IV NSCLC and had records of pre-treatment serum CEA levels. The serum CEA levels were categorized as normal (< 5 ng/ml) or abnormal (≥ 5 ng/ml) to reveal clinically correlated factors with abnormal serum CEA levels.

The epidemiology of lung cancer has been continuously evolving. According to a recent statistical study of cancer prediction in South Korean patients [1], the estimated new and fatal cases of lung cancer in 2013 were 23,543 and 16,448, respectively, in South Korea. Although the incidence of lung cancer has been increasing in men and decreasing in women, it continues to constitute the first leading cause of cancer deaths in both groups [2]. With the change of lung cancer epidemiology, the clinical importance of non-squamous cell histology arising in relatively young-aged, never-smoking women has been steadily increasing [3, 4]. Although the vast majority (approximately two thirds) of lung cancer cases are found in locally advanced or advanced types, the unique metastatic patterns or underlying pathogenic mechanisms of cancer progression have not been definitely elucidated.

Serum carcinoembryonic antigen (CEA) is an established and long-term tumor marker, which has demonstrated its prognostic value in colorectal neoplasms [5, 6]. CEA is overexpressed in approximately 70% of cases of non-small cell lung cancer (NSCLC), as well as more than 95% of adenocarcinomas of gastrointestinal origin [7]. The clinical usefulness of serum CEA in lung cancer has also been vigorously explored recently [8-12]. Although the preceding studies investigated the role of serum CEA for diagnostic or therapeutic purposes, its prognostic relevance within a heterogeneous lung cancer group has not yet been established. We previously identified that high serum CEA levels were significantly associated with brain metastasis detection at the time of diagnosis of stage IV NSCLC [13]. In the present study, we additionally aimed to clarify the relationship between whole-body metastatic features and serum CEA levels in a larger study cohort.

In this study, we analyzed the medical records of treatment-naïve stage IV NSCLC patients who were registered in a database at Seoul St. Mary's Hospital between June 2007 and December 2012. The eligibility criteria for study enrollment were as follows: patients who had information on serum CEA before any treatment; patients who were newly diagnosed with stage IV NSCLC by pathology; and patients who had available whole-body metabolic imaging, including 18F-fluorodeoxyglucose positron emission tomography/computed tomography (18F-FDG-PET/CT) and brain imaging. Patients with no available pathological confirmation or pretreatment whole-body imaging studies and patients with no systemic metastatic diseases in the staging work-up were excluded from this study. Among 549 stage IV NSCLC patients detected during the enrollment period, 377 patients met the inclusion criteria and were eligible for inclusion in this study. We obtained approval from the Institutional Review Board of the Catholic Medical Center Ethics Committee at Seoul St. Mary's Hospital for this retrospective study.

Whole-body metastatic extent was categorized based on metabolic imaging, using 18F-FDG-PET/CT, CT of the whole chest and abdomen and magnetic resonance imaging (MRI) or CT of the brain. For the detection of central nervous system metastasis, MRI of the brain was preferentially conducted. Tc-99 m whole-body bone scans or MRI of the spine was selectively performed to determine the area of skeletal metastasis accurately. Cytologic examination for pleural or pericardial effusion was examined when clinically indicated. The distinction of reactive inflammatory changes from metastasis was sometimes challenging. Thus, imaging interpretation reports, performed by experienced nuclear medicine physicians and radiologists, or serial metabolic changes in corresponding regions were reviewed for accurate determination of the extent of metastasis.

In our previous study [13], we developed a whole-body metastatic score (WBMS) to categorize metastatic tumor spread, based on each metastatic site. Synchronous metastatic sites were classified into seven areas as follows: abdomen/pelvis (including liver, adrenal gland, lymph nodes, and other abdomino-pelvic organs); lung to lung or pulmonary lymphangitic spread; bone (skeletal system); pleura and/or pleural effusion and/or pericardial effusion; upper neck and/or axillary lymph nodes; other soft tissue; and the brain. Total scores were computed from 1 to 7 by the summation of each score. In this study, we additionally assessed the metastatic thoracic lymph node (LN) status to apply the metastatic LN extent. Metastatic LN status was defined as cN0 or cN+ according to the clinical LN status, based on 18F-FDG-PET/CT. cN+ was defined as any metabolically positive LN state in the cN0, cN1, cN2 or cN3 stations. We calculated both WBMS and LN status-adjusted WBMS based on the aforementioned criteria, to estimate metastatic potential and tumor extent. LN-adjusted WBMS was calculated as the sum of WBMS and metastatic LN status.

Blood samples were collected to measure serum tumor marker levels before the application of systemic treatment. The serum CEA level was measured using the enzyme immunoassay method, with an ADVIA Centaur® XP analyzer (Siemens, Munich, Germany). According to the manufacturer's instructions, the diagnostic cut-off point for serum CEA was 5.0 ng/ml. With regard to the serum CEA level, values greater than 1,000 ng/ml were recorded before 2011 as >1,000 ng/ml without any further dilution process. After 2011, serum CEA level was recorded as the highest estimated value measured by the maximal dilution process.

Statistical analyses were conducted using SPSS software (ver. 17.0; SPSS Inc., Chicago, IL, USA). Descriptive statistics were generated to present the characteristics of the variables. Pearson's chi-square test or Fisher's exact test was performed to assess the differences between groups for categorical variables. Nonparametric tests, such as Wilcoxon's rank-sum test or the Kruskal-Wallis test, were used for continuous variable (serum CEA), if the distribution of serum CEA was non-standard. Univariate and multivariate logistic regression analyses were applied to select significant factors associated with increased serum CEA levels. All of the statistical results were two-sided and were considered statistically significant if P < 0.05.

The patient and tumor characteristics are summarized in Table 1. The median age was 65 years old (range, 30-94), and 62.6% were male. Because serum CEA levels were preferentially examined in non-squamous cell carcinoma, the majority of the patients had histology consistent with adenocarcinoma (73.5%). The median serum CEA value was 8.2 ng/ml (range, 0.1-2872.7), and 42.2% of the patients presented within the normal range for serum CEA (< 5 ng/ml). A histogram that describes the distribution of CEA levels in the entire cohort is shown in Figure 1.

A histogram describing the distribution of CEA levels in the study population (N = 377). 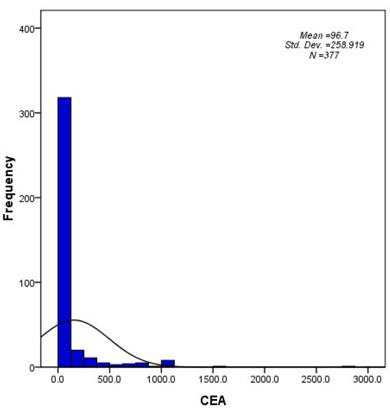 Patient and metastatic characteristics according to the serum CEA

Patient demographics and metastatic characteristics according to the serum CEA levels.

Patient demographics and metastatic characteristics according to the serum CEA levels (100 ng/ml).

The possibility of increased metastatic potential in cohorts with abnormal serum CEA levels has been investigated [14, 15]. However, no clinical studies have examined whether whole-body metastatic potential could be dependently increased in advanced NSCLC patients with abnormal serum CEA levels. Considering the originating features of CEA (CEACAM5), cancer metastasis could be enhanced by increased serum CEA levels, with CEA functioning as an adhesion molecule and chemoattractant [16]. There has been much evidence that CEACAM5 can activate Kupffer cells and stimulate IL-1β, IL-6 and tumor necrosis factor-α, thereby promoting adhesion of tumor cells to the endothelium [14-16]. Adhesion molecules that induce invasion can also facilitate the migratory process, resulting in the propagation of cancer metastasis [16]. On the basis of these molecular and experimental implications, the current study provided strong evidence of increased metastatic potential in abnormal serum CEA levels through clinical data.

Although the prognostic and predictive value of serum CEA has been rigorously explored, few studies have examined metastatic patterns or characteristics according to serum CEA levels. A strength of this study was its demonstration that abnormal serum CEA levels could constitute a strong indicative marker for increased whole-body metastatic potential in initially diagnosed stage IV NSCLC in this large study cohort. Moreover, metastatic LN status was evaluated along with the whole-body metastatic sites for the purpose of more precise evaluation of metastatic tumor status. Abnormal serum CEA levels were significantly associated with bone, brain, LN and pulmonary metastases, and very high serum CEA levels were also correlated with abdomen/pelvis and other soft tissue metastases. Our findings strongly support the possibility of the inhibition of metastatic processes in advanced lung cancer by antibodies that target CEA, as a previous preclinical study disclosed [16]. A multitude of recently developed CEA cancer vaccines are now in various stages of development and require further study to determine the ultimate roles of these vaccines in cancer treatments [7].

A limitation of this study was possible bias in the selection of the eligible study population who had available pre-treatment serum CEA levels. In fact, the percentage of samples with a histology characteristic of adenocarcinoma was higher (73.5%) than reported in recent universal and nationwide epidemiologic data [17, 18]. Furthermore, metastatic status was evaluated by clinical and metabolic imaging and not by pathological examination. Whether increased serum CEA levels could enhance the specific metastatic affinity of particular sites remains unclear.