CD70 is a co-stimulatory molecule involved in the immune response and also in cancer development and progression. Recent studies show that high CD70 expression in cancer cells may inhibit the anti-tumor response. Furthermore, CD70 expression has been reported as a predictive marker of resistance to chemotherapy in ovarian cancers. Some in vitro studies have shown that CD70 expression is epigenetically down-regulated through hypermethylation of its promoter during tumoral progression. This study evaluated the level of CD70 expression in surgical samples of breast invasive tumors and determined its correlation with CD70 promoter methylation.

Twenty “luminal A” and 20 “basal-like” frozen samples from early breast tumors were retrospectively selected. CD70 expression was evaluated by quantitative real-time PCR. Total DNA was bisulfite-treated, and methylation levels of 5 consecutive CG sites present in the proximal region (-464, -421) of the promoter were assessed by pyrosequencing analysis. Statistical analyses were performed using the Mann-Whitney test.

In this study, higher CD70 expression was observed in the basal-like group, but this expression was not related to promoter methylation. The higher expression in the poor-prognosis subgroup of patients makes CD70 a potential target for emerging anti-CD70 therapies.

Tumor cells develop many mechanisms to escape the immune system, including the loss of tumor surface antigen expression, induction of lymphocytes apoptosis, and inhibition of some co-stimulatory molecules involved in recognition by lymphocytes [1].

CD70 (encoded by the TNFSF7 (Tumor Necrosis Factor ligand Superfamily member 7) gene) is a co-stimulatory factor present on B-cells, activated T-cells, and dendritic cells [2]. The interaction with its ligand, CD27, is involved in survival, proliferation, and lymphocyte differentiation [3]. CD70 is not expressed in non-lymphoid normal tissue [4] but is overexpressed in tumor cells of various solid cancers [5]. This high expression may induce cytotoxic effects in B-cells and T-cells, induce lymphocyte apoptosis, and promote escape from the immune system [6]. In contrast, Aulwurm and al. [7] suggested that CD70 expression could induce a long-lasting immunity in mice models of gliomas. Furthermore, many in vitro studies have shown that CD70 overexpression by tumor cells can induce an anti-tumor response via T-cells in breast cancer cell lines [8,9]. In breast cancer, the role of CD70 also remains unclear. Rhee and al. showed that its expression in breast cancer cell lines is inhibited during tumor cell progression, most likely via promoter hypermethylation [10]. One of the hypotheses is that the inhibition of CD70 expression in tumor cells would allow them to escape the immune response. The study of the CD70 promoter region (which contains 3 CpG islands) was originally described by Lu et al.[11] focusing on a 1-kb sequence located upstream of the transcription initiation site and containing the second CpG island. Yu et al.[12] then showed that this second CpG island is heavily methylated during the in vitro proliferation of mammary tumor cells. This observation was recently confirmed by a study showing that CD70 gene expression is inhibited via the hypermethylation of its promoter in a breast cancer cell line [10]. To our knowledge, no study to date has been conducted in vivo to evaluate the expression and methylation of CD70 in breast cancer. Since "luminal A" and "basal-like" tumors present opposed biological and clinical behaviours, we hypothesised that their relationship with immunity may differ.

Accordingly, the aim of this study was to evaluate the level of CD70 expression in surgical samples of 2 groups of breast invasive tumors, basal-like and luminal A, and to determine the correlation of the expression with its promoter methylation.

Fifty-six patients aged ≥18 years who had been treated for newly diagnosed early breast cancer in Henri Becquerel Center, Rouen, France, between January 2008 and December 2011 were retrospectively screened. Invasive breast carcinomas that were treated first by surgery without neo-adjuvant treatments were eligible. Twenty tumors with a “luminal A” immunohistochemical profile and twenty tumors with a “basal-like” profile were selected. The “luminal A” tumors were positive for Estrogen Receptors (ER) (≥10%) and negative for HER2 overexpression/amplification and showed a low Ki67 (≤20%). The “basal-like” tumors were negative for ER (<10%), negative for Progesterone Receptors (PR) and negative for HER2 overexpression/amplification, showed high Ki67 [13] (>20%), and were positive for at least one basal-cell marker (Cytokeratin 5 or EGF-R)[14]. For each patient, informed consent for biomedical studies on histological samples was collected. Tumor DNA and RNA were extracted from frozen tissue using the AllPrep DNA/RNA Mini Kit (QIAGEN).

Quantitative Real-Time RT-PCR was performed using predesigned TaqMan® Gene Expression Assays (Life Technologies). Analyses were performed using a 7900HT Fast Real Time PCR System (Life technologies). The relative expression level of target genes within a sample was expressed using the DCt method [15]. Ct is the number of cycles of amplification needed to reach a predefined threshold and DCt is the difference between the Ct for the gene of interest and the Ct for the reference gene (HMBS). DCt is proportional to the amount of RNA in the sample and allows the evaluation of the relative expression level for each sample. DCt values were averaged for duplicates.

Among the 40 patients, the median age was 60 (from 30 to 88 years old). Twenty patients (50%) had lymph node involvement at diagnosis. The median tumor size was 28 mm (20-150 mm). A histological analysis revealed ductal invasive carcinoma in 38 cases, mucinous carcinoma in 1 case, and metaplastic squamous cell carcinoma in 1 case. The median SBR grade was III. Twenty tumors (50%) significantly expressed ER, and 14 tumors (35%) significantly expressed PR. No tumor overexpressed HER2. Ki67 was ≥20% in 19 of the 40 tumors (47%). Of the basal-like tumors, CK5 was positive in 18 of 20 cases (90%), and EGF-R was positive in 7 of 20 cases (35%); all basal-like tumors were positive for at least one of the two markers. The patient characteristics according to their group are detailed in Table 1.

CD70 Expression levels in tumor cells according to their subtype. 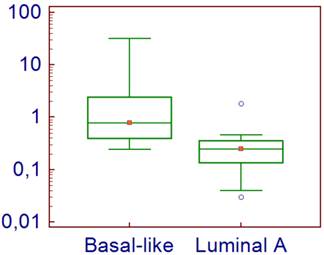 There was no statistical link between the methylation levels of the 5 studied CG sites and the expression of CD70 (correlation coefficient: r =-0.09, p=0.56; Figure 2).

Correlation between the CD70 expression and its median methylation rate of the five studied CG (log) for the 40 analyzed tumors. 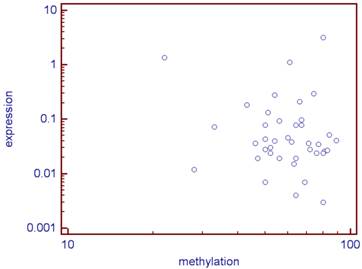 Few authors have studied the expression and methylation of CD70 in breast cancer, particularly in ex vivo tumors. Yu and al.[12] studied the methylation of the CD70 promoter in breast cancer cell lines and found that the proximal promoter region of CD70 was hypermethylated at the time of tumor progression, in parallel with a very low RNA expression. However, we did not confirm these results, and the difference in results may be related to the use of a different technique for the assessment of methylation level (cloning versus pyrosequencing) and tumor cells of different origin (cell lines versus ex vivo). Although the expression of CD70 was significantly higher in the basal-like group, we did not observe lower methylation levels in this group. Nevertheless, the epigenetic regulation of CD70 is currently still unknown, and many other factors may be involved in its regulation (e.g., histone modifications, transcription and transduction factors).

CD70 is currently considered to be a potentially attractive therapeutic target, because it is overexpressed in many types of lymphomas and invasive carcinomas but is not expressed in normal tissue. Indeed, several agents specifically targeting CD70 are currently being studied [17, 18].

In this study dedicated to ex vivo early breast cancer, we observed a significantly higher expression of CD70 in the group of basal-like tumors compared to luminal A tumors. Basal-like tumors are known to be more aggressive than luminal A tumors. Our results are concordant with those of Jilaveanu et al.[4], who showed that the expression of CD70 is higher in renal tumors with a poor prognosis and was associated with lower survival in clear cell carcinomas. Similarly, Bertrand showed in 2013 that the overexpression of CD70 is correlated with poorer survival [16] in diffuse large B-cell lymphoma. But to demonstrate the specific role of increased CD70 expression in basal-like breast cancer as a functional marker rather than general upregulation of stimulatory signals as a result of higher immune activation, expression levels of other co-stimulatory molecules such as CD86, CD80, CD70 together with effector cytokines should be also analyzed and compared between basal-like tumors and luminal A tumors.

Interestingly, the expression of CD70 could also be considered as a potential predictor of response to chemotherapy. Indeed, Liu and al.[19] in 2013 focused on 92 patients with stage III or IV ovarian cancer. In this group of patients, CD70 overexpression in tumor cells by immunohistochemistry was associated with a decreased response to cisplatin and increased chemoresistance, as well as a decreased survival rate.

Furthermore, the tumor stage should be considered: in metastatic situations, the overall inflammation may change the response to anti-CD70 targeted therapies.

Finally, our findings regarding differential CD70 expression in ex vivo early breast cancer between basal-like and luminal A tumors are encouraging and deserve to be confirmed using a larger cohort to assess its predictive or prognostic value and to correlate the expression of RNA with immunohistochemically detected protein expression for routine use.

The authors wish to thank all members of the department of molecular biology for their technical assistance and comments.

The authors have not received any financial support for this study and have no conflicts of interest to declare.