Background: Inflammatory breast cancer (IBC) remains the most aggressive type of breast cancer with the greatest potential for metastasis and as a result, the highest mortality rate. IBC cells invade and metastasize through dermal lymphatic vessels; however, it is unknown how lymphatic drainage patterns change during IBC growth and metastasis. Herein, we non-invasively and longitudinally imaged lymphatics in an animal model of IBC using near-infrared fluorescence (NIRF) imaging.

Materials and methods: Mice were imaged in vivo prior to, and up to 11 weeks after subcutaneous or orthotopic inoculation of human IBC SUM149 cells, which were stably transfected with infrared fluorescence protein (iRFP) gene reporter (SUM149-iRFP), following intradermal (i.d.) injection of indocyanine green (ICG).

Conclusions: Our pre-clinical studies demonstrate that non-invasive NIRF imaging can provide a method to assess changes in lymphatic drainage patterns during IBC growth and metastasis.

Inflammatory breast cancer (IBC) is the most aggressive, but poorly understood type of breast cancer. IBC constitutes up to 5% of all newly diagnosed breast cancers, yet responsible for 8-10% of breast cancer-related deaths [1]. IBC has a 15-year survival rate between 20 - 30% [2-4]. Approximately 40% of IBC patients have distant metastases to the brain, bones, and lymph nodes (LNs) at the time of diagnosis, as compared to 5% of patients with non-IBC [5]. Unfortunately, there are no definitive molecular or pathological diagnostic criteria for IBC [6]. IBC grows in nests or sheets, spreading outward into the skin and eventually distant sites through dermal lymphatic vessels. Therefore, one of the key pathological characteristics of IBC is dermal lymphatic invasion by tumor emboli, which can lead to obstruction of lymphatic drainage possibly causing the clinical inflammatory features of diffuse erythema, rapid breast enlargement and edema as indicated by peau d'orange (orange peel) appearance covering at least a third of the breast surface [7].

It has been demonstrated that dermal lymphatic involvement is associated with a high risk for local recurrence [8]. However, owing to the inability to directly image the lymphatics in vivo, the association between IBC metastasis and pre-existing lymphatic vasculature and/or tumor lymphangiogenesis has been assessed by indirect pathological evaluation of skin punch biopsies, which can be prone to tissue sampling error leading to missed diagnoses of dermal lymphatic involvement [6, 8]. Yet despite the important role of lymphatics as a critical pathway for cancer metastasis, relatively little is known about the role of lymphatic function in IBC growth and metastasis. Therefore, functional lymphatic imaging could shed light on the general mechanism of lymphovascular invasion exhibited by nearly all metastasizing cancers and ultimately result in novel therapeutics to arrest metastasis.

Animals were clipped and residual hair removed with depilatory cream (Nair, Church & Dwight Co., Inc.) 24 hrs before imaging. Mice were imaged for baseline information prior to inoculation of SUM149-iRFP cells. Anesthetized mice with isoflurane (2 % oxygen) were maintained on a warming pad at 37ºC. A volume of 10 μl of 645 μΜ of ICG (Akorn, Inc.) dissolved in mixture of distilled water and 0.9 % sodium chloride in a volume ratio of 1:9 was injected intradermally to the base of the tail using with 31 gauge needles (BD). Fluorescence images were acquired immediately after and for up to 20 min after i.d. injection using our custom-built far-red and NIRF imaging systems as described previously [9-15]. To achieve a greater magnification, a macrolens (Infinity K2/SC video lens, Edmund Optics Inc.) was used.

SUM149 cells were transfected with piRFP plasmid to obtain fluorescent cells. After transfection, cells were selected with medium that contained 1200 μg/mL gentamicin (G418). Subclones with high iRFP-expression were isolated in 96-well plates by limiting dilution. iRFP expression was confirmed by immunofluorescence (Figure 1A) and FACs analysis (Figure 1B). There was no difference in the cell proliferation rates of parental cells and selected RFP transfectants, as determined by comparing their growth rate in monolayer culture (data not shown). 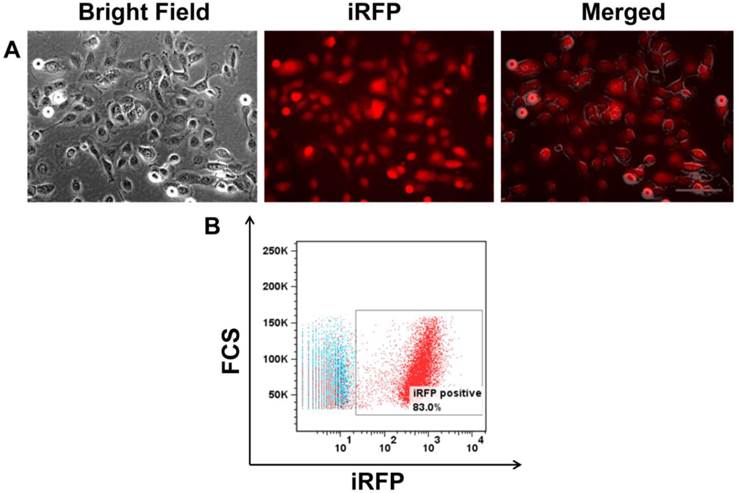 SUM149-iRFP cells were orthotopically inoculated in the MFP of mice and visualized longitudinally over nine weeks following implantation (Figure 2). In conjunction with tumor growth assessment, we also performed lymphatic imaging to investigate how lymphatic drainage patterns change during disease progression. As reported previously [9, 10], ICG-laden lymph drained from the base of the tail, where ICG was injected, to the ILN and to the ALN. This drainage pathway was detected in nearly all mice imaged in this study, with the exception of one mouse (See Figure 3). Normal lymphatic drainage pathways to the ALN were observed up to 3 weeks post inoculation (p.i.), even as ICG accumulated proximally to the tumor. At 5 weeks p.i., we observed strong ICG fluorescence in the proximity of the tumor. Magnified fluorescent images acquired using a macrolens showed lymphatic capillary network (open arrow in Figure 2). Dynamic NIRF imaging (Additional file 1: video 1) demonstrated ICG dye accumulated anteriorly to the tumor, which exhibited both lateral and retrograde flow due to obstruction of normal lymphatic drainage towards the ILN by the tumor. At 7 weeks p.i, these anterior vessels were no longer observed; rather, new drainage pathways to the ALN had formed which bypassed both the tumor and tumor draining ILN (TdILN). By 9 weeks p.i., we observed rerouting of ICG-laden lymph to the ALN and the more tortuous and leaky lymphatic vessels (Additional file 2: video 2) as tumor burden increased. 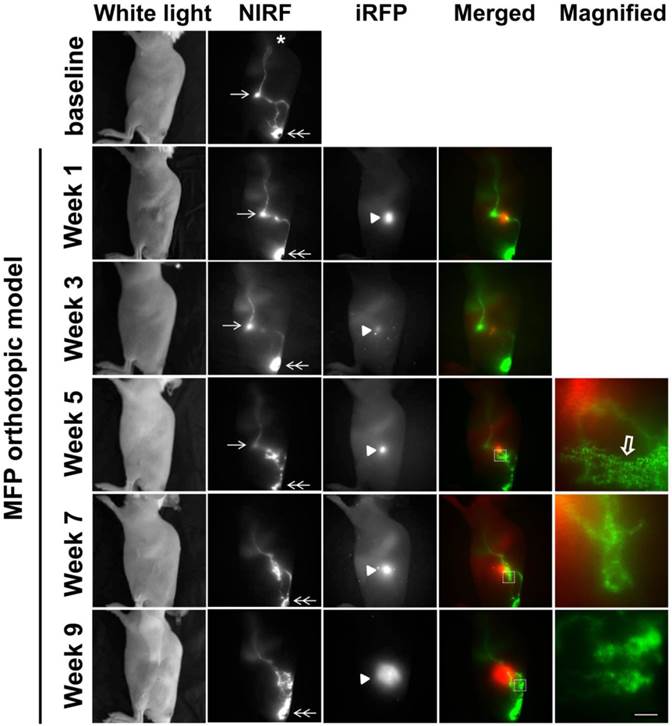 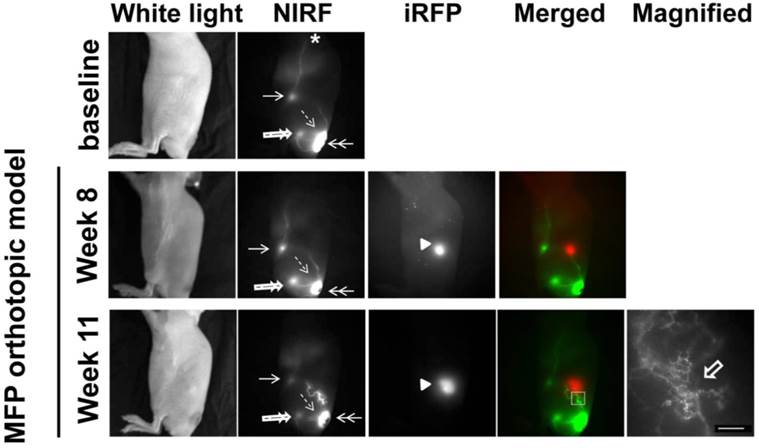 As previously mentioned, one mouse showed altered lymphatic drainage prior to orthotopic inoculation of tumor cells (Figure 3). The baseline images from this mouse showed lymphatic drainage from the injection site (double arrow) to the popliteal LN (PLN) (double open arrow) and then to the ischial LN (IsLN) (broken arrow) and to the ILN (arrow) and then to the ALN (asterisk, Additional file 3: video 3). At 11 weeks p.i., we detected rerouting around the orthotopic tumor in comparison to 8 weeks p.i., due to tumor obstruction of normal lymphatic drainage towards the ILN. We also observed dermal backflow into the lymphatic capillary network shown in the magnified image. However, there were no alterations in the drainage patterns from ICG injection site to the PLN and IsLN and from ILN to the ALN.

To assess how a different implantation model would affect lymphatic drainage, we also performed subcutaneous (s.c) tumor implantation and longitudinally monitored tumor growth and changes in lymphatic drainage (Figure 4). NIRF imaging showed ICG-laden lymph draining along the lymphatic vessels in the skin above the tumor at 1 week p.i., with increased fluorescent intensity and fluorescent spots. At 3 weeks after inoculation, we observed ICG accumulation in the tumor as evidenced by strong fluorescence likely due to leaky lymphatic vessels (Additional file 4: video 4). However, ICG intratumoral accumulation was not detected at 4 weeks p.i.; instead, we observed dermal backflow proximal to the tumor. At 5 weeks p.i. alternate lymphatic routes were observed around the tumor which were dilated by 7 weeks p.i; and ICG accumulated anteriorly around the tumor margin at week 9. Furthermore, our in vivo imaging data also showed iRFP fluorescence in the TdILN in this mouse, indicative of LN metastasis (Figure 5A) and was confirmed by ex vivo intravital iRFP-fluorescence imaging of the TdILN. SUM149 overexpresses luminal cytokeratin 8 [20]; therefore, we further confirmed local LN metastasis by IHC staining and detected cytokeratin-positive cells in the TdILN compared to the contralateral ILN (Figure 5B). 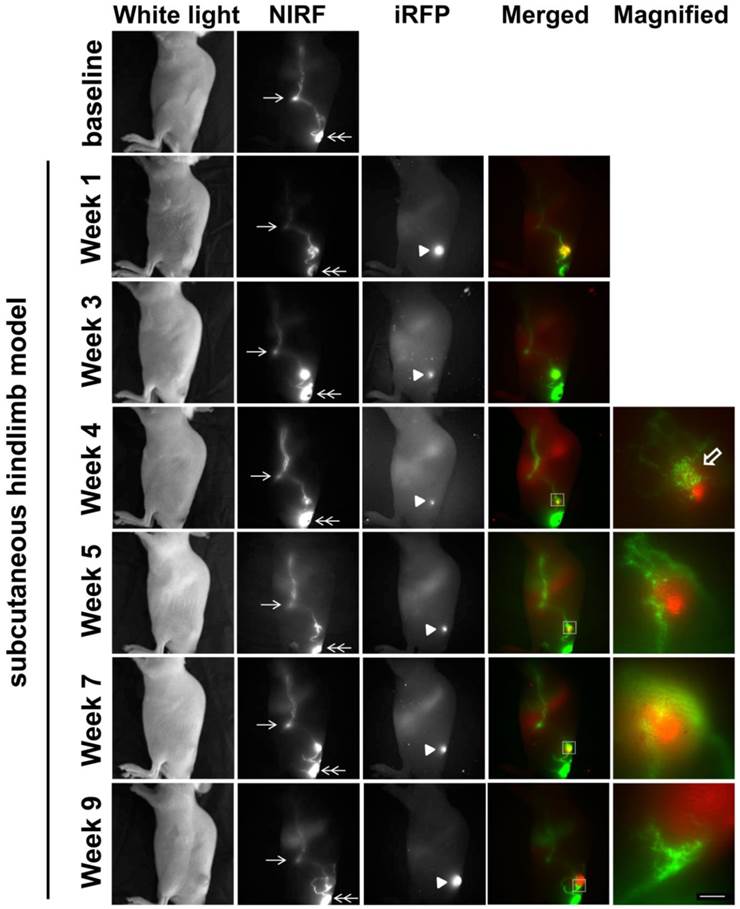 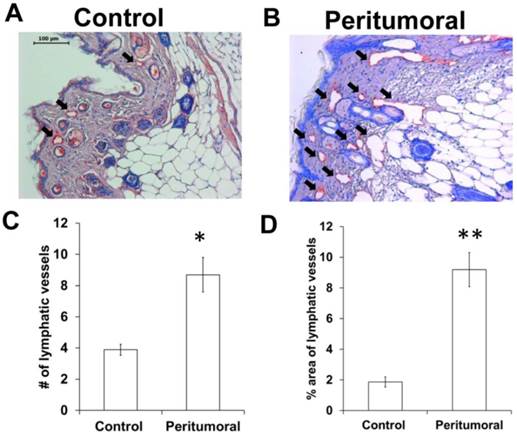 Currently, MARY-X is the only pre-clinical model that recapitulates the lymphatic intravasation phenotype of human IBC [6, 21]. MARY-X induces erythema in the skin over the tumor, mimicking the clinical presentation of IBC, and grows exclusively within murine lymphatic and blood vessels [21]. Another commonly used pre-clinical IBC model is SUM149, initially derived from a primary tumor of a patient with invasive ductal carcinoma [22]. SUM149 grows as multiple nodes/clusters and produces spontaneous local skin and/or distant metastasis to the leg after the axillary MFP injection [23]. In this study, we stably transfected iRFP gene reporter into SUM149 cells to enable longitudinal assessment of tumor growth and metastatic progression to LNs. Unlike other gene reporters such as GFP and DsRed, iRFP emits in the far-red region and is thus more suitable for in vivo imaging due to relatively low tissue absorption, scattering, and autofluorescence, resulting in increased light penetration [24]. However, in vivo iRFP fluorescence imaging requires animals be fed with special alfalfa-free diets to reduce fluorescence induced by standard murine diets that contain chlorophyll [15, 19]. Previously, similar to iRFP, IFP1.4 was also developed as another far-red fluorescent protein [25]. However, IFP1.4 requires exogenous administration of chromophore biliverdin to further emit fluorescence, whereas iRFP can use physiological levels of endogenous biliverdin to be visualized in tissues [24, 25].

Rerouting of tumor drainage during tumor growth and LN metastasis has been observed in clinical and preclinical studies [10, 14, 26-30]. These altered drainage patterns are due mainly to blockage of normal lymphatic drainage by the tumor, thus triggering alternate, collateral pre-existing lymphatic vessels to drain stagnant lymph to the non-sentinel LN. It has been reported that lymphatic drainage patterns in the skin are highly variable among patients, even with identical lesion sites, and therefore cannot be predicted [31]. A previous study demonstrated a significantly higher mRNA expression of lymphangiogenesis-related factors, such as vascular endothelial growth factor (VEGF)-C, in IBC than in non-IBC [32]. VEGF-C is a key lymphangiogenic factor known to induce tumor lymphangiogenesis and enhance tumor spread to the regional LNs and distant sites in mouse models of breast cancer [33-35]. Van der Auwera et al. demonstrated that intratumoral lymphatic vessels in IBC were larger and more numerous than those in non-IBC [36], which were often found to collapse due to growing tumor cells [37]. In addition, Van der Auwera et al. found that peritumoral lymphatic vessels in IBC had significantly higher lymphatic endothelial cell (LEC) proliferation than those in non-IBC, although there is no difference in LEC proliferation in intratumoral areas between IBC and non-IBC [36]. Taken together, remodeling of lymphatic vessels by active tumor lymphangiogenesis may also lead to changes in lymphatic drainage patterns and the propensity of IBC to metastasize via the lymphatic vasculature.

In conclusion, using NIRF lymphatic imaging with sufficient spatial (4.49 and 36 Line Pairs/mm for whole body and magnified imaging, respectively) and temporal (200 ms exposure time) resolution and sensitivity, we showed changes of lymphatic drainage patterns in mice subcutaneously or orthotopically inoculated with SUM149 human IBC cells that stably express a far-red excited gene reporter; however, additional work is required to determine whether a lymphatic phenotype we observed in mice bearing SUM149-iRFP is specific to IBC as compared to non-IBC. Nonetheless, dual-wavelength imaging of a combination of lymphatics (ICG excitation, 785 nm; emission, 810 nm) and tumor progression and metastasis (iRFP excitation, 690 nm; emission, 710 nm) used in this study enables a new method to non-invasively monitor lymphatic response to IBC growth and metastasis and assess longitudinal changes in response to new therapeutic strategies. Previously, we imaged atypical tortuous lymphatics and altered lymphatic drainage in the arm and affected breast of a patient with IBC using clinical NIRF technology to image as deep as 3-5 cm with a microdose of ICG [38-40]. Therefore, NIRF lymphatic imaging can be used for non-invasive assessment of lymphatic involvement of metastatic human IBC.

Video 1. ICG flow in a mouse 5 weeks after orthotopic inoculation of SUM149-iRFP cells to the inguinal MFP from Figure 2.

Video 2. ICG flow in a mouse 9 weeks after orthotopic inoculation of SUM149-iRFP cells to the inguinal MFP from Figure 2.

Video 3. ICG flow in a mouse prior to orthotopic inoculation of SUM149-iRFP cells from Figure 3.

Video 4. ICG flow in a mouse 3 weeks after s.c. inoculation of SUM149-iRFP cells from Figure 4.

The authors would like to thank Holly Robinson and Karen Gore for technical assistance with the mice used in these experiments and Dr. Melissa B. Aldrich for scientific review of manuscript. This work was supported in parts by National Institutes of Health R21 CA159293 (S.K), R01 CA128919 (E.M.S-M) and U54 CA136404 and (E.M.S-M). G.D.A acknowledges support from The Schissler Foundation Fellowship for Translational Studies of Common Human Diseases.

Dr. Sevick-Muraca declares financial interest in the NIRF Imaging, Inc., a company seeking to commercialize NIRF lymphatic imaging. No other conflicts of interest are declared for the remaining authors.