Objective: To explore the clinical and pathological characteristics of small-cell carcinoma (SmCC) of the prostate and applicable treatment methods. Methods: We reported three cases of SmCC of the prostate diagnosed from 1999 to 2011 at the Chinese PLA General Hospital. We also reviewed clinical and pathological data of 26 cases in China reported over the same period. Results: Serum prostate-specific antigen (PSA) levels were normal in 20 cases (76.9%) and elevated in six (23.1%). There was local invasion in 12 cases (46.2%) at the time of diagnosis; lymphatic vessel invasion and distant metastases were detected in eight (30.8%) and nine cases (34.6%) respectively. At the end of follow-up, 16 cases (61.5%) had died, eight (30.8%) survived, and two (7.7%) were missing. The median survival time was 8 months, and the 1-year survival rate was 23.2%. Statistical analysis showed that survival time was significantly correlated with chemotherapy treatment (p<0.05). However, serum PSA levels, surgical approach, pathological type, local invasion, lymphatic vessel invasion, and distant metastasis had no significant relationship with survival (p>0.05). Conclusions: SmCC of the prostate is a rare neoplasm typified by high malignancy, rapid progress, and poor prognosis. Pathological analysis is an important tool for confirming a diagnosis. Pure SmCC is usually not associated with an increase in serum PSA. Surgery, mixed with acinar adenocarcinoma components, and clinical staging do not correlate with prognosis; and chemotherapy was the only prognostic factor. For patients, diagnosed by preoperative biopsy, administering chemotherapy as the first-line treatment may improve outcomes.

Small-cell carcinoma (SmCC) is a poorly differentiated tumor that can occur in many organs and tissues, although it is rare outside the lung. Approximately 10% of cases occur in the prostate. SmCC of the prostate is an uncommon type of prostate cancer, accounting for only 1% of cases [1]. The first case of SmCC of the prostate was reported by Wenk et al. [2] in 1977. To date, about 160 cases have been reported in the English-language literature, and 26 cases in the Chinese literature [3-21].

Due to its rare occurrence, most studies have only provided case reports, and few have carried out mediation sample analysis. Thus clinical and pathological characteristics and the biological behavior of SmCC of the prostate remain uncertain.

Here, we present three cases of SmCC of the prostate treated at the China PLA General Hospital (PLAGH) from 1999 to 2011. We also reviewed similar cases in the Chinese literature over the same period, focusing on clinical and pathological characteristics. Considerations of biological behaviors as well as the treatment options are also analyzed.

Clinical and pathological information of the cases from PLAGH

In total, 1,002 cases of prostate cancer were diagnosed pathologically at the Chinese PLA General Hospital from 1999 to 2011, and seven of them were suspected of SmCC. All pathologic sections from these seven cases were reviewed by three pathologists. Immunohistochemical staining for prostate-specific antigen (PSA), CD56, synaptophysin (Syn), chromogranin A (CgA), and cytokeratin (CK) was performed. Four cases were excluded because of the negative staining for CD56, Syn, and CgA, which were suspected to be poorly differentiated acinar adenocarcinomas with Gleason scores 9-10. The remaining three cases (0.3%) were confirmed as SmCC. Detailed clinical and pathological information is presented below. 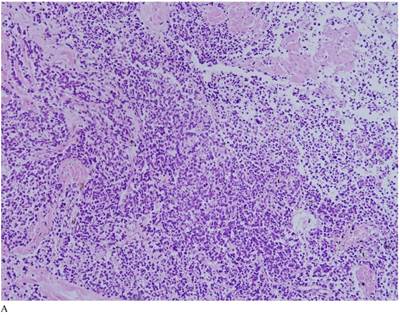 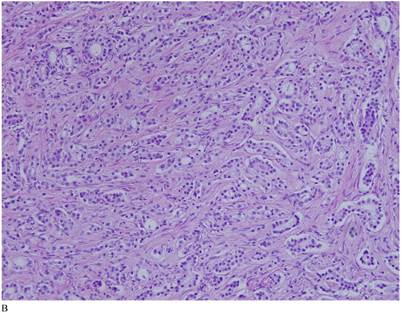 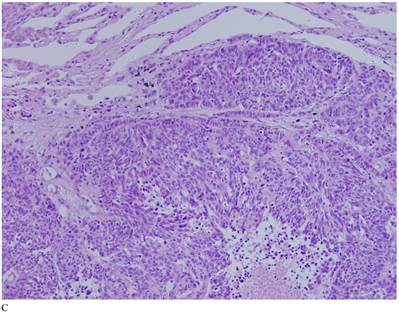 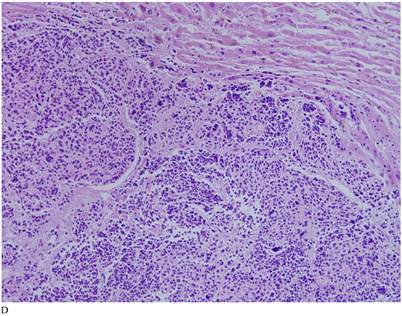 Case 2. A 65-year-old patient was referred to our hospital with symptoms of dysuria and frequent urination. The serum PSA level was 20.67ng/mL (normal range: 0-4 ng/mL). DRE indicated the prostate was homogeneously enlarged and the central sulcus disappeared. MRI showed a mass in the prostate, combined with pelvic lymph node metastasis. He underwent an ultrasound-guided prostate biopsy. Combined SmCC and acinar adenocarcinoma (Gleason scores, 4+3=7) were confirmed pathologically. The patient received endocrine therapy. The 4-month follow-up showed tumor-bearing survival, and the general condition of the patient was poor.

Case 3. A 76-year-old patient was admitted to the hospital for frequent urination and difficulty urinating. Serum PSA level measured on admission was normal. DRE suggested grade III prostate enlargement. An ultrasound scan showed a visible heterogeneous low echo pattern in the prostate region, with involvement of the trigone of the bladder. An ultrasound-guided prostate biopsy was performed and SmCC was confirmed pathologically. The patient refused any treatment following the biopsy confirmation of pure SmCC. The 8-month follow-up indicated tumor-bearing survival.

Retrieval method of the related literature

All literature reports relating to SmCC of the prostate were accessed from the China Hospital Knowledge Database (CHKD), the Chinese Medical Journal Database (CMJD), the Chinese Medical Citation Index (CMCI), and the Wanfang Database (WFD) using the keywords “small cell carcinoma”, “prostate”, and “neuroendocrine.” The search located 29 cases in 19 reports [3-21]. The contents of these reports were then reviewed. Two cases were found to be duplicated and were eliminated [19-20]. Another case was also eliminated due to incomplete clinical and pathological data [21]. In total, 26 cases were eligible [3-18]. Data on age, clinical symptoms and signs, serum PSA levels, DRE findings, ultrasound scans and MRI, surgical approach, postoperative therapy, follow-up time, and survival were collected.

Statistical analyses were performed using SPSS 13.0 software. Overall survival was analyzed using the Kaplan-Meier method. The correlation between each clinical and pathological variable and survival time was determined using Fisher's exact test. The relationship between pathological type and serum PSA levels was evaluated using the chi-squared test. Multivariate analysis was performed for prognostic factors using a Cox risk model. Two-tailed tests were used for all processes and p values <0.05 were considered statistically significant.

Clinical information of the patients reported in literatures

The 26 cases were aged from 21 to 82 years (average 59 years). Because the median age was 61 years, patients were divided into two groups: <59 years old and ≥60 years old. There were 15 cases in the ≥60 group (57.7%). Most cases (18, 69.2%) suffered from difficulty urinating, and 20 cases (76.9%) showed normal serum PSA levels. DRE indicated grade III prostate enlargement and hardening. Space-occupying lesions were detected by imaging examinations. Among them, 11 cases (42.3%) underwent prostate biopsies; eight (30.8%) underwent transurethral resection of the prostate (TURP) and seven (26.9%) underwent radical prostatectomy. For postoperative treatment, 13 cases (50.0%) received chemotherapy, two (7.7%) received radiotherapy, and 13 (50.0%) had a history of endocrine therapy (the clinicopathologic features were summarized in table 1).

Two of our three cases of SmCC were mixed with acinar adenocarcinoma, and one was pure SmCC. Of the 26 cases in the literature reports, 21 cases were pure SmCC. Under the microscope SmCC tissues were flaky and in a nest-like distribution. Coagulative necrosis was also observed. The cells were small, like oat grains, with one end pointed and the other rounded. The cells contained only a small amount of cytoplasm, with the nuclei bared and darkly colored, and the nucleolus obscured; mitotic figures were frequently seen. For most cases, positive immunohistochemical staining for neurone-specific enolase (NSE), CD56, Syn, and CgA were detected, and immunohistochemical staining was positive for CK, producing a dot-like pattern. Local invasion, lymphatic vessel involvment, and distant metastases were found in 12 (46.2%), eight (30.8%), and nine cases (34.6%) respectively.

SmCC of the prostate is a poorly differentiated tumor with a very low incidence (less than 1% of all prostate cancers) [1, 22]. We reviewed pathological specimens of all 1,002 confirmed cases of prostate cancer from 1999 to 2011 in the Chinese PLA General Hospital; only three cases (0.3%) of SmCC were confirmed.

SmCC of the prostate is most common in elderly people. The average age is 69 at the time of diagnosis according to one report [23]. However, the average age of the 26 Chinese cases in the present study was 59, lower than the reported age. Whether this is associated with ethnicity remains to be determined. The common clinical symptoms for the 26 cases were dysuria and urinary tract irritation. Occasionally, there was hematuria, which might be due to the invasion into the bladder or the urinary tract [14]. DRE and imaging examinations are generally non-specific and can barely differentiate SmCC from acinar adenocarcinoma [1]. 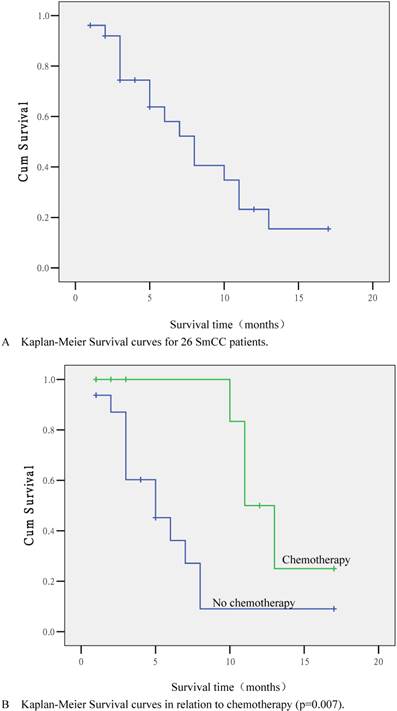 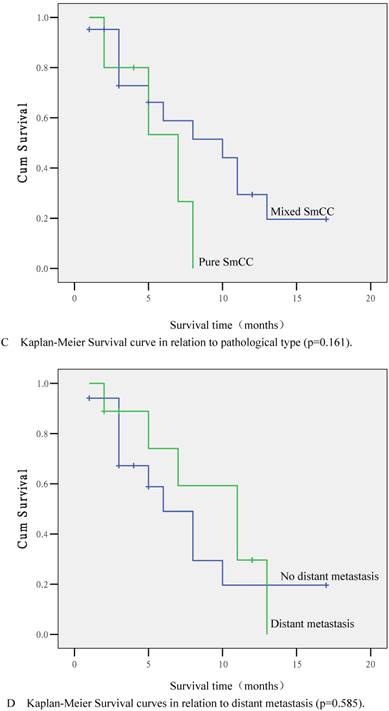 The confirmation of SmCC of the prostate relies mainly on pathological findings. Microscopically, SmCC cells are consistently round or short-spindle-shaped, arranged in a flaky or nest-like pattern. The cells only contain a small amount of cytoplasm, with the nuclei bared and darkly colored. The nucleolus is obscured and mitotic figures are frequently observed. Necrosis is also common. Immunohistochemical staining of SmCC cells for NSE, Syn, CgA, and CD56 is usually carried out for diagnosis [24]. Combined use of these four markers often results in a definitive diagnosis. Moreover, PSA, PAP, and P504S expression are rare in SmCC [8] and a CK-positive staining pattern in SmCC is characteristically dot-like. This can be used to differentiate SmCC from the poorly differentiated acinar adenocarcinoma.

SmCC of the prostate is commonly combined with acinar adenocarcinoma according to the literature. Only about 35% of reported cases are pure SmCC [1, 13]. Two of the three cases at our hospital were mixed SmCC, consistent with findings in the literature. Among the other 26 cases reported in China, 21 cases were pure SmCC, accounting for 87.0%, which is higher than the percentage reported in foreign literature. The reasons may lie in: (1) they were mainly collected from cases report; (2) eleven out of 26 cases only underwent prostate biopsies. Tissues within a limited scope were sampled which could not rule out a mixture with acinar adenocarcinoma. The survival time was short for both pure and mixed SmCC, however, for the mixed SmCC cases, the recurrence and metastasis were related to the components of SmCC. Thus pathologists should carefully observe the specimens to identify and report any component of SmCC.

Currently, there are no established guidelines for the treatment of SmCC of the prostate due to the small number of cases [1]. In some reports, it has been proposed that surgery is the first choice for early and confined lesions [25]. However, most SmCC cases have already been in advanced stages when diagnosed. It is difficult to achieve the best outcome with surgery for such advanced cases. SmCC is a hormone-independent tumor, and endocrine therapy is not effective for SmCC [6]. Seven of 26 cases (26.9%) underwent radical prostatectomy, eight (30.8%) underwent transurethral resection of the prostate, 11 (42.3%) underwent prostate biopsies, and 13 cases (50.0%) received endocrine therapy. Statistical analyses showed that the performance of surgical resection and the administration of endocrine therapy were not related to survival time. Some believe that local radiotherapy might improve patients' quality of life. However, due to the small number of cases, we could not assess the efficacy of radiotherapy.

SmCC of the prostate is a high-grade malignant tumor, characterized by rapid growth, short survival time, and poor prognosis [12]. Most cases have already progressed to the advanced stage at the time of diagnosis and are already combined with distant metastases [29, 30] to the liver, lung, bone, and central nervous system. In our study, combined local invasion, lymph node involvement, and distant metastasis were detected in 46.2%, 30.8%, and 34.6% of the cases, respectively, at the time of diagnosis. The average survival time was only 8 months and the 1-year survival rate was only 23.2%. Some reports had stated that only the components of SmCC could lead to metastasis in mixed cases. Case one treated in our hospital was finally conducted autopsy, and confirmed a diagnosis of mixed SmCC, but all the components in the metastatic tumor were pure SmCC, which implies that SmCC is more likely to cause early metastasis than acinar adenocarcinoma.

In conclusion, SmCC of the prostate is a rare, high-malignancy neuroendocrine tumor, and is not associated with elevated serum PSA levels. SmCC can be distinguished from poorly differentiated acinar adenocarcinoma based on histomorphological characteristics and immunophenotype. SmCC of the prostate is more sensitive to chemotherapy, which is recommended as the first-line treatment for the cases confirmed by biopsy. Moreover, the prognosis of mixed SmCC of the prostate depends on the components of SmCC. For cases with any component of SmCC in the prostate cancer specimens, the treatment and prognosis prediction should be regarded as the same as those for pure SmCC.

We thank Professor Li Zhiwen at the Epidemiological Research Branch, Institute of Reproductive and Child Health, Peking University for carrying out the statistical analysis.