Use of Proteins as Biomarkers and Their Role in Carcinogenesis 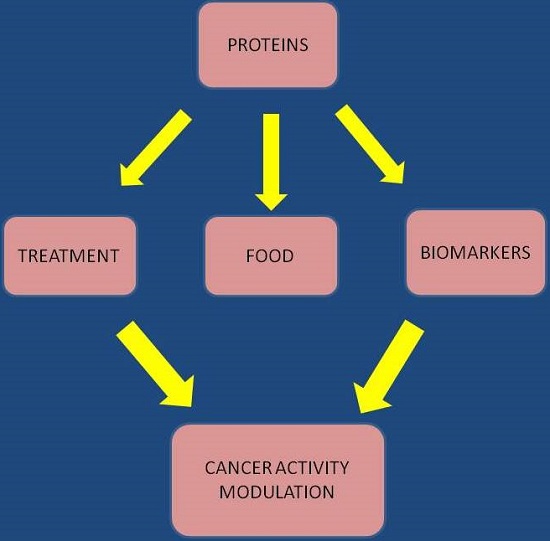 Recent Findings: Whey protein, present in dairy products, is an excellent source of the sulphur amino acid cysteine, the rate limiting substrate in glutathione synthesis. Notably, this protein survives digestion and has been shown to have anti-carcinogenic properties in animal studies. Lectins are phytochemicals present in plant foods, and have active components which alters cancer initiation, promotion and progression. Lectins have been characterized as a useful tool in biochemistry, cell biology, immunology and in diagnostic and therapeutic purposes in cancer research. Soy proteins contain various compounds, including isoflavones, protease inhibitors and protein kinase inhibitors, which have been proven effective in tumor growth inhibition. They have therefore, been greatly emphasized in cancer prevention and treatment. It has been proved that soy food consumption was associated with decreased risk of death and recurrence of breast cancer. CPTP is a recently discovered protein whose main role is to transport C1P, a pro-inflammatory molecule. The discovery of CPTP may shine a light on the mechanism of inflammatory diseases, and hopefully offer a potential target for therapeutic purposes in cancer research. Interleukin-6 is a multifunctional cytokine that affects the activity of cancer cells. It is involved in tumor growth, and elevated levels is associated with an increased risk of cancer. S100B is a well-established biomarker for malignant melanoma, and useful in assessing tumor load, stage and prognosis for patients with this disease. Other members of this family of proteins include S100A4, which has been associated with several malignancies and S100A2, which has been found to be decreased in some cancers. CCN are a group of regulatory proteins, located in the extracellular matrix (maricellular). They are involved in cellular adhesion, mitogenesis, chemotaxis, cell survival, and wound healing. CCN proteins are also able to modulate the signals of several proteins, which may also influence skeletal development and angiogenesis. Many of the functions of these proteins are thus also related to tumor growth. Furthermore, CCN interacts with estrogen in the development of cancer, and is implicated in some breast and ovarian cancers.