Study Design: One hundred thirty-nine women diagnosed with breast or gynecologic cancer between 2003 and 2012 that subsequently had a radiologic diagnosis of fracture were identified retrospectively using electronic medical records. Results were compared with skeletal fracture pattern previously reported for a general population.

Results: Skeletal fractures in cancer patients occur throughout the entire skeleton similar to general population. The most common sites were vertebrae (16%), feet and toes (15%), ribs (12%), hands and fingers (10%), and pelvis (8%). Fracture incidence was observed starting within the first year of survivorship, and continued to after five years. The median time from cancer diagnosis to fracture varied by age (p<0.01), from a high of 3.2 years for ages 50-59 to a low of 1.2 years for patients older than 70.

Women who receive cancer therapy experience an increased fracture risk from treatment-induced bone loss compared to women without cancer associated treatment [1-3]. Recent reports show very high (36.9%) incidence of insufficiency fracture within 2 years of treatment [4]. Because of advances in cancer treatment, the number of cancer survivors continues to grow with an estimated 18 million cancer survivors by 2022 at risk for developing treatment related complications [5]. Most knowledge gained on fracture associated outcomes including anatomical location is primarily derived from an aging general population [6, 7]. These studies found more than 70% of fractures in women between 40 and 79 years old occurred at locations other than the lumbar spine and hip. Furthermore, in the limited reports of fracture outcomes among cancer survivors, fractures are regarded as late treatment complication. There is a lack of data regarding the time of fracture occurrence in relation to treatment received and if there are certain sites more prone to fracture among cancer survivors compared to fractures experienced due to aging in the general population.

In this retrospective study, our objective is to report relative occurrence of skeletal wide fracture in cancer survivors and to compare the pattern with the general population.

Women diagnosed with breast or gynecologic cancer and who subsequently had a radiologic diagnosis of fracture were included. One hundred thirty-nine women treated at the University of Minnesota Medical Center between 2003 and 2012 were identified retrospectively using electronic medical records. The study was approved by the University of Minnesota Institutional Review Board. Data extracted from review of medical records included age, cancer type, date of diagnosis of cancer, treatment received, date and site of fracture. Breast cancer patients underwent multimodality (chemotherapy, hormone therapy, radiation therapy) treatment as defined by their oncologists. The treatment regimen for ovarian cancer patients included standard systemic chemotherapy including paclitaxel and carboplatin. Patients diagnosed with an endometrial cancer were primarily treated using external beam radiation therapy (EBRT) to the pelvis (median dose, 45-50 cGy in 25-28 fractions) and adjuvant chemotherapy.

Descriptive statistics were used to summarize the cohort. Patients were divided approximately into age quartiles whose time from cancer diagnosis to fracture was compared using a log-rank test.

Figure 1A shows the spatial fracture distribution. The most common sites for cancer patients were vertebrae (16%), feet and toes (15%), ribs (12%), hands and fingers (10%), and pelvis (8%). The fracture pattern in two general health populations is included for reference [6, 7]. The age range for the women in both references was between the ages of 50 and 79 years old. The spatial distribution of fracture occurrence was similar among the cohorts. The cancer population had a lower percentage of distal forearm fractures (6% vs 8-16%) but higher in the ribs (12% vs 7-10%) and pelvis (8% vs 4-5%). 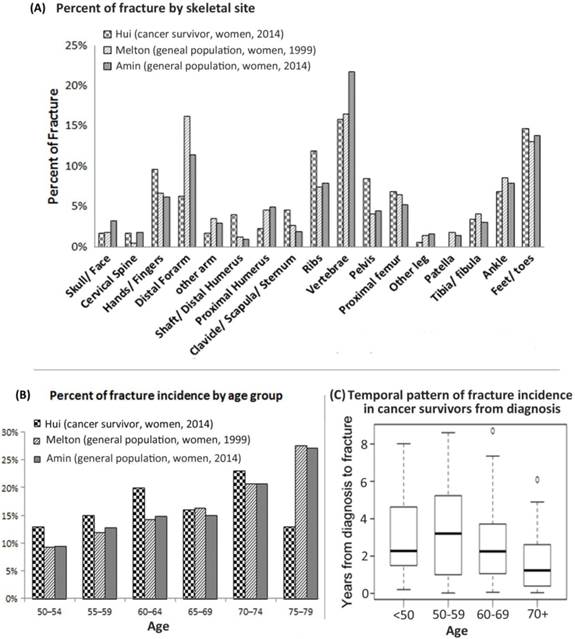 To compare the fracture pattern due to age to the general population, cancer survivors and data from general population studies were separated into six 5-year age groups (Figure 1B). Figure 1C shows the temporal fracture pattern for cancer survivors based on years since treatment. Fracture incidence was observed starting within the first year of survivorship, and continued up to five years and longer. Among this cohort, 63% of fractures were identified within the first 3 years but only 15% beyond the 5th year. Median time from cancer diagnosis to fracture varied by age (p<0.01), from a high of 3.2 years for ages 50-59 to a low of 1.2 years for ages ≥ 70.

This pilot study shows skleteal wide fractures among breast and gynecologic cancer survivors. The wide distrubution of antatomical fracture locations is not soley linked to site of treatment, although the direct radiation injury can not be isolated within this study. Post treatment time of fracture incidence appears to be very early, within years.

Fracture in general population indicates a skeletal wide event rather than a few common sites such as spine and hip [6, 7]. Our study is the first to reveal that fracture pattern in cancer survivors may have similar fracure pattern as in general population. Pelvic radiation associated side effect of pelvic fracture is documented [2]. Our study is the first report with a comprehensive skeletal fracture distribution report. Based on our report the sites of potential fracture occurences among cancer survivors extends beyond the spefic radiation bone injury site. Specifically, major fracture sites, including vertebra and pelvis, accounted for only 25% of fracture events. There is a large unaccounted fracture occurence outside of the commonly screened sites utilzing standard methods. Among cancer survivors, consideration for bone health assessment should take into account the wide distribution of potential fractures beyond standard bone screening locations. There were also differences seen in the age distribution of cancer survivors at the time of fracture compared to studies of the general population. Both previously mentioned studies show that as indivdiuals age, the number of fractures also increases [6, 7]. Another study found that fracture incidence increases exponentially with incrased age and decreasing radius bone mass [8]. However, for cancer survivors, this characteristic of increased fracture with age is disrupted (Figure 1B). Cancer related mortality could effect the pattern, which was not investigated in the present study. In future, with larger number of subjects will provide more accurate temporal (post treatment and age related) distribution of fracture incidence.

In report by Blaes et al., post treatment pathologic fracture among soft-tissue sarcoma patients was identified to increase with time with overall incidence reported at 9% at 10 years [9]. In a study of gynecologic cancer patientes treated with radiation to the pelvis, the fracture incidence within the radiation field was 11% at 5 years and 15% at 10 years [3]. Early occurrences of fracture observed among our patient population suggests a need for early bone health follow up. Poor bone health (osteoporosis or osteopenia) could accelerate fracture events. The onset of early fractures may also be associated with underlying bone health status proceeding cancer therapy. Older age, especially above age 70, could influence accelerated fracture after treatment. However, it has never been clinical practice to assess bone health prior to treatment. We were not able to discern the cause of fracture. Early fracture after treatment diagnosis may represent increased frailty induced by the treatment itself [10].

Though there are limitations in this retrospective study (e.g. small sample size, does not include all cancers, women only), our study reveals that cancer treatment may cause early and skeletal wide fracture. Further study is underway to extend current analysis to all cancers, male and female. The standard assessment for osteoporosis, an indicator of fracture risk, is by Dual-energy x-ray absorptiometry (DEXA) scan. Although clear guidelines exist regarding its role and interpretation within the general population, no clear recommendations exists among cancer survivors. Specifically, there are no recommended time for bone health screening after cancer treatment outside of the general recommendations for an aging population.

We previously demonstrated that routine CT scans frequently used for cancer surveillance could also assess volumetric bone mineral density of cancellous bone [11]. Having the ability to measure bone density as part of the routine cancer follow up of patients with no added cost, time or radiation dose will allow for the prospective evaluation of bone mineral changes. Furthermore, cytotoxic cancer treatments accelerate marrow adipogenesis [12], a potential factor for bone damage. New CT imaging techniques have been developed with an ability to measure rapid bone and marrow damage and assess comprehensive treatment management for cancer survivors [13]. Due to the increasing number of young cancer survivors, addressing bone health post treatment is of clinical signficance.

This work is supported by the National Institute of Arthritis and Musculoskeletal and Skin Diseases (NIAMS) (1RO3-AR05333-01), PHS Cancer Center (P30 CA77598). We acknowledge James R Essler for helping to identify records from electronic medical records.

Authors do not have any conflict of interest.