Naturally occurring diarylheptanoid curcumin (CUR), a principal component of the Asian spice turmeric, has been shown to have anti-cancer effects in many tumor types. However, a detailed mechanism regarding CUR induced tumor cell killing remain to be comprehensively explored. Using two head neck squamous cell carcinoma (HNSCC) cell lines FaDu (hypopharyngeal) and Cal27 (tongue), we demonstrated a novel mechanism by which CUR levies the cytotoxic effect. We found that CUR induced upregulation of pro-apoptotic Bik, down-regulation of survival signaling by AKT and NF-κB prior to the induction of the caspase-cascade reduction of cell proliferation, are primary mechanisms of CUR-induced cell death, thus providing insights into the anti-tumor activity of CUR in HNSCC cells.

Head and neck squamous cell carcinoma (HNSCC) is one of major causes of cancer morbidity and mortality in the United States and across the world despite concerted efforts to development of new therapeutic approaches [1, 2]. Many challenges exist in the management of HNSCC due to both the location of the tumor and the impairment of essential functions, such as speech and swallowing, caused by efforts to relieve tumor burden [3]. Conventional therapeutic strategies, which include surgery, chemotherapy, and radiation, are found to only be effective in 50% of the cases [4] and do not significantly improve survival rate over past several decades. Platinum-based compounds, such as cisplatin, are the cornerstone of treatment for these cancers. Cisplatin exerts a dose-dependent response where higher doses induce apoptosis in a larger fraction of tumor cells [5]; cisplatin-resistance a major contributor to morbidity [6]. There is a tremendous need to develop new tumor specific and molecularly targeted agents to alleviate this challenge [7]. Single agent targeted therapies, such as monoclonal antibodies, that inhibit a variety of oncogenic kinases or growth factor pathways have been extensively pursued in recent years [8], but they have not led to significant increases in durable response nor increased survival. Signal transduction in cancer cells is a sophisticated process that involves receptor tyrosine kinases (RTKs) that eventually trigger multiple cytoplasmic kinases, which are often serine/threonine kinases [9]. Clinical-trial data has indicated that targeting only one of the kinases involved in these signaling pathways results in limited or sporadic responses [10]. Recent evidence suggests that the simultaneous inhibition of multiple kinase-driven signal pathways may facilitate optimization of the overall therapeutic benefit [11]. It is urgent to identify a single agent with the ability to target multiple biomarkers [12-14].

Recent studies have shown that diferuloylmethane, or curcumin (CUR), that is an active component of the perennial herb Curcuma longa (turmeric), possesses potent anti-inflammatory, antioxidant and a broad spectrum of tumor suppressive activities [15]. CUR has been shown to suppress multiple cell signaling pathways, as well as inhibit cell proliferation, invasion, metastasis and angiogenesis [15]. It has been reported that CUR suppresses activation of nuclear factor-kappa B (NF-κB) and signal transducer and activator for transcription 3 (STAT-3) [16], while at the same time down-regulates the expression of genes such as B-cell lymphoma (Bcl)-2, cyclooxygenase-2 (Cox2), matrix metalloproteinase-9 (MMP-9), G1/S-specific cyclin D1 and cell adhesion molecules [17, 18].

Although numerous studies have demonstrated the chemopreventative potential of CUR against a wide variety of tumors, HNSCC focused studies are limited. This report sheds new light on the mechanistic process by which CUR suppressed the growth of HNSCC cells via the down-regulation of cell survival signaling pathways and enhanced Bcl-2-interacting killer (Bik)-mediated programmed cell death.

One thousand of FaDu or Cal27 cells were seeded in six-well plates and treated with CUR or DMSO control, as indicated. After one hour, the medium was replaced with completed (drug-free) medium and the cultures were allowed to grow for 10 - 12 days. The colonies were fixed and stained with 0.5% crystal violet in absolute ethanol, photographed and counted using a dissection microscope.

Concentration response assays were performed with FaDu and Cal27 cells for 24 hours to evaluate the effect of CUR on HNSCC cell growth. CCK-8 cell survival assays revealed that CUR significantly inhibited the viability of FaDu and Cal27 cells (Figure 1A). 12.5 μM CUR (the approximate IC50 at 24 hours), continued to reduce proliferation over a 72-hour period (Figure 1B). To further study the anti-proliferative effect observed in FaDu and Cal27, colony forming assay was performed to determine if CUR was cytotoxic or cytostatic. CUR exposure resulted significant inhibition of colony formation (Figure 1C and D). These data indicate that at low concentrations short term exposure of CUR can inhibit HNSCC cell growth and that it becomes increasingly toxic over a very narrow range.

We next sought to determine the extent to which apoptosis might govern the anti-proliferative effect of CUR. Electrophoretically resolved genomic DNA harvested from FaDu cells exposed to increasing concentrations of CUR for 24 hours revealed fragmentation consistent with apoptosis (Fig. 2A). To determine the kinetics of CUR-induced apoptosis Western immunoblot analysis was performed with whole cell lysates harvested from FaDu cells at 24 and 48 hours. After 24 and 48 hours, 12.5 μM CUR induced bands consistent with the active forms of PARP and caspases-9 and -3 in the cells (Figure 2B). Considered together, these results suggest that CUR induced apoptosis in FaDu cells by activating the intrinsic mitochondrial-mediated apoptotic pathway. 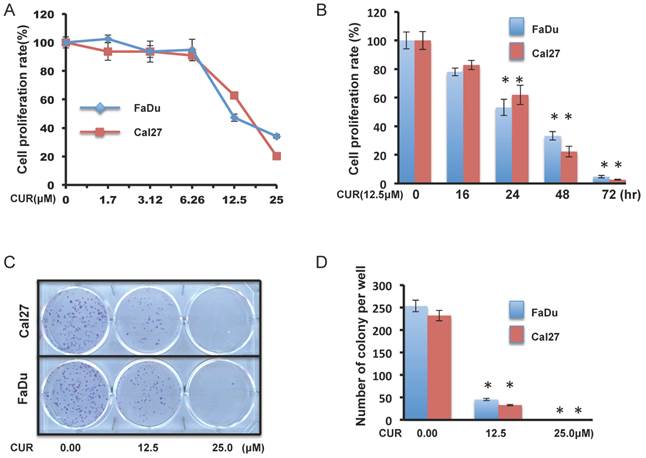 The Bcl-2 family of proteins plays a critical role in the regulation of cytochrome c release from the mitochondria during intrinsic apoptosis. To determine whether CUR induced the apoptotic cascade through regulation of Bcl-2 family members immunoblot analysis was performed with whole cell lysates from FaDu cells treated for 24 and 48 hours. The results indicated that while the expression levels of anti-apoptotic proteins Bcl-xL, Bcl-w, Bcl-2, and Mcl-1 were not significantly influenced (Fig. 3 A), the pro-apoptotic protein Bik and Bim were significantly increased (Fig. 3 B). It has been reported that up-regulation of Bik activates Bax/Bak which in turn inhibits the function of Bcl-2/Bcl-xL, thus resulting in cytochrome c release and ultimately triggering caspase activation [22]. Collectively, these results suggested that CUR might regulate activation of the caspase-casade through induction of Bik and Bim.

Accumulated data has revealed that CUR targets key cellular signaling pathways including NF-κB, PI3K/AKT, MAPK/Erk and JAK/STAT[23, 24]. We have reported that up-regulation of PI3K/AKT and MAPK/Erk signaling pathways are associated with HNSCC progression [21, 25, 26]. The effects of 12.5 μM CUR on constitutive PI3K/AKT and MAPK/Erk activity in HNSCC cells was examined following 24 hours exposure. Immunoblot analysis revealed decreased expression of phospho-AKT and phospho-Erk1/2 in both Cal27 and FaDu (Fig. 4 A). Since both PI3K/AKT and MAPK/Erk signaling pathways require EGFR activation for regulation of cell proliferation and survival, expression of phospho-EGFR and phospho-HER3/ErbB3 was assessed. CUR led to a slight reduction in phospho-EGFR and phospho-HER3/ErbB3 (Figure 4 B). To determine whether CUR modulates NF-κB and STAT-3 activation phosphorylation of NF-κB and STAT-3 in both FaDu and Cal27 cells was measured. CUR reduced phosphorylation of NF-κB and STAT-3 in both cells lines compared with their controls (Fig. 4 C). Having established that CUR could reduce the activity of these key survival pathways, we further examined whether CUR could affect modulators of cell proliferation. We found that CUR considerably inhibited expression of cyclin D1 and cyclin D2 in Cal27 cells, while only a moderate reduction in expression was observed in the FaDu cells (Fig. 4 D). Considered together, these data suggest that the collective inhibition of survival signaling networks is an important feature of CUR-mediated anti-proliferation in HNSCC.

CUR induced Bcl-2 family pro-apoptotic Bik and Bim protein expression in HNSCC. FaDu cells were treated in the presence or absence of 12.5 μM CUR for 24, and 48hrs. Immunoblot analysis of whole-cell lysates from FaDu cells treated with CUR and probed with antibodies for Mcl-1, Bcl-xL, Bcl-2, Bak, Bax, Bik, and Bim. Each membrane was stripped and re-probed with monoclonal β-actin. “0” indicates equal molar DMSO control. 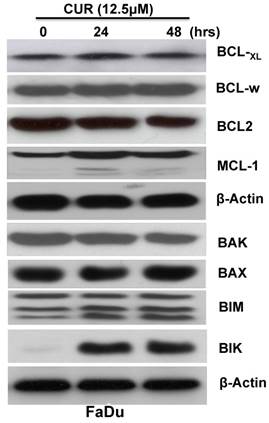 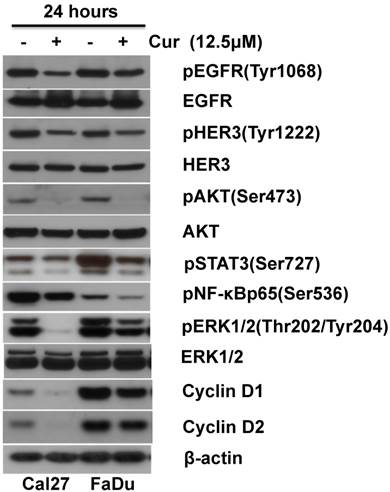 More than 60% of FDA-approved anti-cancer drugs are natural products or derived from them [27, 28]. Natural products that exhibit the ability to suppress activation of cell survival pathways, while selectively enhancing cell death in malignant cell populations are generally regarded to have the greatest therapeutic potential. CUR is ideal in this regard and it is abundant and inexpensive [15]. One of the major challenges limiting the clinical utility of CUR is sub-therapeutic bioavailability. Recently though, there have been several very promising reports that the CUR analogs UBS109 and H-4073 (with improved pharmacokinetics) inhibit growth and enhance cisplatin-mediated killing respectively, in murine HNSCC xenograft models [29, 30]. Continued interest in moving CUR toward the clinic, with studies such as these, underscores the necessity to more completely elucidate the subcellular pathways and processes modulated by CUR. The current study demonstrates, for the first time, that CUR inhibits cell proliferation and induces apoptosis in HNSCC FaDu and Cal27 cells subsequent to increased protein expression of pro-apoptotic Bcl-2 family members Bik and Bim, and the suppression of several key cell survival signaling pathways.

Programmed cell death is a normal physiological response necessary to maintain homeostasis during tissue development. Coding mutations in many genes such as TP53, FAT1, CDKN2A, NOTCH1, CASP8, are common in HNSCC and can facilitate evasion of apoptosis and drive tumorigenesis and resistance to chemotherapy [31]. The Bcl-2 family is comprised of both pro- and anti-apoptotic members classified by their Bcl-2 homology domains (BH1 - BH4) [32]. Pro-apoptotic members can contain BH1, BH2 and BH3 domains (Bax, and Bak) or just the BH3 domain, such as Bim, Bik, PUMA and NOXA [32, 33]. Anti-apoptotic members such as Bcl-2, Bcl-xL, Mcl-1, Bcl-w contain the BH1, BH2, BH3 and BH4 domains [32]. Activation of intrinsic apoptotosis leads to Bax and Bak homo-oligomerization and permeabilization of the mitochondrial membrane which facilitates the release of cytochrome c and precipitates assembly of the apoptosome [32]. Bik is the founding member of the BH3-only family proteins [34], and a number of reports have established that ectopic overexpression of Bik results in apoptotic cell death [20, 35, 36]. Our finding that Bik and Bim protein levels are high while HNSCC are undergoing apoptosis suggests that pro-apoptotic signaling by the Bcl-2 family might be an important feature of CUR-induced cell death. The simultaneous cleavage and activation of PARP, Caspase 9 and Caspase 3 further support this notion.

Numerous in vitro and in vivo models have demonstrated that the anti-cancer potential of CUR depends on its ability to modulate NF-κB, AKT, MAPK, p53, Nrf2, Notch-1, JAK/STAT, β-catenin, AMPK and other signal transduction pathways [23]. STAT3 is an oncogene that is overexpressed in approximately 82% of HNSCC cases [37-39]. Activation of STAT3 leads to proliferation and survival mediated by the induction of specific target genes, such as cyclin D1, Bcl-2, and Bcl-xL [37, 40]. Interruption of STAT3 impedes cancer cell growth and enhances apoptosis in HNSCC [41, 42]. Constitutive NF-κB signaling protects HNSCC and other cancer cells from apoptotic cell death through the regulation of genes involved in inflammation, proliferation, metastasis, tumor cell adhesion [43-45]. The current study demonstrates that CUR markedly decreases the phosphorylation of STAT3 and NF-κB in HNSCC FaDu and Cal27 cells. The cytotoxic effect of CUR in HNSCC is preceded by the complementary inhibition of survival signals that prevent apoptosis and the induction of the pro-apoptotic Bcl-2 family members Bike and Bim.

In HNSCC, STAT3 activation has been implicated as the principal link to aberrant autocrine/paracrine transforming growth factor (TGF) α/epidermal growth factor receptor (EGFR) signaling [46] and other upstream events, such as interleukin-6/Janus kinase (JAK) signaling [47]. EGFR is over-expressed in a wide variety of solid tumors, including 80 - 90% of HNSCC [48]. Monoclonal antibodies, and low-molecular weight tyrosine kinase inhibitors (TKI) specifically directed against these receptors have been utilized in the clinic, however monotherapy with EGFR inhibitors has seen with only limited success, with response rates between 5 - 15% in recurrent and/or metastatic cancers [49, 50]. Herein, our findings demonstrate that CUR induced inhibition of PI3K/Akt, MAPK/Erk, STAT3 and the up-stream mediators EGFR1 and HerbB3 in both HNSCC FaDu and Cal27 cells.

In conclusion, present study indicated that CUR is a potential anticancer drug of natural product. Our results suggested that CUR suppressed the growth of HNSCC FaDu cells via activation pro-apoptotic Bik resulted in induction of apoptosis in the cells through inhibition of pro-survival signaling pathways.