Lung cancer is the top cancer killer worldwide. Tyrosine kinase inhibitors (TKIs), for example erlotinib, are commonly used to target epidermal growth factor receptor (EGFR)-mutated lung adenocarcinoma (ADC). Autophagy is a cellular response to stress, serving as a protective mechanism during anticancer therapy. The tumor microenvironment (TME) is composed of non-tumor cells that include fibroblasts. Our study aimed to investigate the effect of TME on autophagy and TKI sensitivity. Following cell sorting after direct co-culturing, autophagy and cytokine production were observed in both HCC827 and MRC-5 cells. The synergistic combination of erlotinib and chloroquine (autophagy inhibitor) was observed under TME. Tumor growth was significantly suppressed with combined erlotinib/chloroquine compared with erlotinib in HCC827 xenografts.

Recently, we have shown that autophagy can be induced by erlotinib in EGFR-mutated lung adenocarcinoma (ADC) cells, while inhibition of autophagy with chloroquine or siRNA targeting key autophagic proteins enhances the apoptotic effect of erlotinib [1]. Nonetheless this cancer cell line model may only be a simplified representation of real-life lung cancer without the influence of the complex tumor microenvironment (TME). During tumor development, there are close interactions between tumor cells and the host leading to formation of a unique TME that is composed of different stromal cells, immune cells, vasculature and extracellular matrix. Through crosstalk between different cells, TME participates in almost every stage of tumor development and results in increased tumor progression and metastatic potential [2, 3]. Few reports have described the association between autophagy and TME. In an experimental model of breast cancer cells co-cultured with fibroblasts, autophagy was induced in fibroblasts and contributed to cancer progression [4, 5]. The effect of TME on drug sensitivity in cancers has been demonstrated in bone marrow stromal cells via mediators of CXCR4/SDF-1 axis, soluble factors and adhesion proteins [6]. Recently, hepatocyte growth factor produced by stromal fibroblasts has also been shown to render in vitro and in vivo resistance to EGFR TKI treatment in lung cancer [7].

In this study, we hypothesized that autophagy and cytokine production would occur in the presence of TME in an in vitro cell line model. The effects of an autophagic TME on TKI sensitivity in EGFR-mutated lung ADC were investigated. Finally, the in vivo combination effect of chloroquine (autophagy inhibitor) and erlotinib in EGFR-mutated lung ADC was studied in a tumor xenograft model.

Cells were incubated at 4oC in the dark for 1 hour with PE-conjugated annexin-V (BD biosciences, New Jersey, USA), PI and APC-conjugated EpCAM. Cells were then subjected to flow cytometry (Beckman Coulter, Inc., USA).

EpCAM is utilized as a surface marker to isolate lung cancer cells from cancer-associated fibroblasts [10]. After 7 days of co-culturing, cells were incubated with PE-conjugated anti-EpCAM antibody. PE-conjugated IgG Isotype was added to cells as a control for gating during cell sorting. EpCAM+ and EpCAM- cells were isolated by a BD fluorescence-activated cell sorting (FACS) Aria cell sorting system (BD Biosciences).

Co-cultured cells were sorted into 2 populations (Figure 1A). After 7 days of co-culturing, IL-6 and IL-8 mRNA was elevated (Figure 1B) and p62 expression was decreased (Figure 1C) in both sorted MRC-5 and HCC827 cells compared with their corresponding homotypical counterparts.

In this study, we mimicked a TME by co-culturing HCC827 lung cancer cells with MRC-5 fibroblasts. Cytokine elaboration and autophagy occurred in both HCC827 and MRC-5 cells under co-culture conditions. The cytokines (IL-6 and IL-8) produced in TME served as one of the driving forces for autophagy. Nonetheless, sensitivity of HCC827 cells to erlotinib was not dampened, and combined chloroquine and erlotinib induced more apoptotic cell death compared with erlotinib alone in TME. Synergism between chloroquine and erlotinib was also demonstrated using a HCC827 xenograft model. 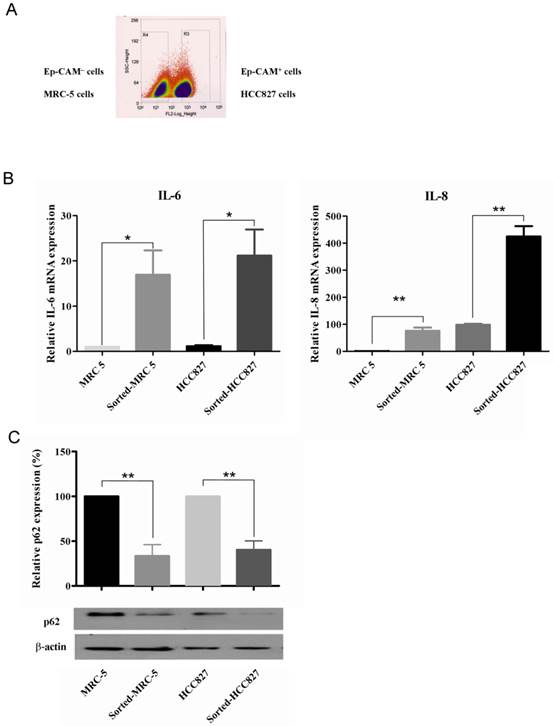 (A) Apoptosis in HCC827 or co-cultured HCC827 cells after erlotinib ± chloroquine treatment. In homotypical HCC827 cells, combination of erlotinib with chloroquine significantly increased apoptotic cell death compared with erlotinib alone. In co-culture conditions, the sensitivity to erlotinib was preserved and synergistic combination of erlotinib/chloroquine was evident. Statistical significance (*: p <0.05, **: p <0.01) indicates comparison with control. (B) Antitumor effect of erlotinib, chloroquine (CQ) or combined erlotinib/CQ in a HCC827 xenograft model in nude mice. Longitudinal tumor size with different treatment groups. The relative tumor volume was calculated as fold-change to the baseline tumor volume prior to treatment. Progressive tumor growth was noted in both control and CQ treatment group, while significant tumor growth suppression was evident in erlotinib treatment and combination group. Statistical significance (*: p <0.05, **: p <0.01) indicates comparison between erlotinib with control and combination with erlotinib. 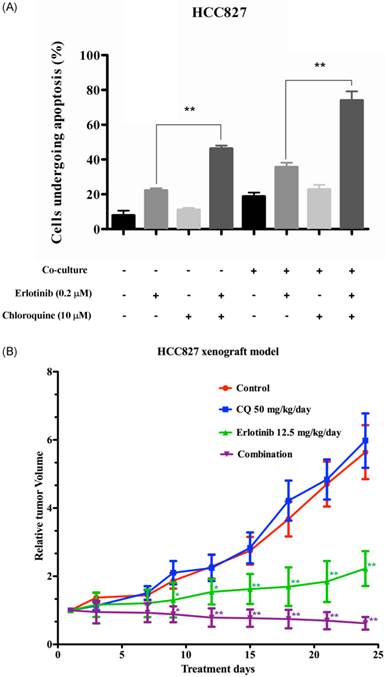 By directly co-culturing MRC-5 with HCC827 cells, an activated TME was generated. This finding differed to a prostatic cancer model wherein only stromal fibroblasts could drive tumor progression by co-culturing with prostatic epithelial cells [14], but was consistent with a previous breast cancer model [4]. Our findings suggest the presence of intermingled interactions between lung tumor cells and fibroblasts in TME.

Autophagy status in tumors is highly dependent on tumor type and stage [15]. Interestingly, autophagy occurred in both cancerous and stromal compartments of the TME, and might provide new insight into the possible relationship between autophagy and TME. Nonetheless previous studies have only demonstrated autophagy induction in cancer-associated fibroblasts via oxidative stress derived from cancer cells [5]. The possible role of elaborated cytokines in TME on autophagy was also studied. Exogenous application of IL-6 or IL-8 increased ATG5/12 conjugation and decreased p62 in both HCC827 and MRC-5 cells, indicating cytokine-induced autophagy in TME. Pretreatment with dexamethasone, an anti-inflammatory agent shown to downregulate IL-6 and IL-8 expression in fibroblasts [16], partially reversed p62 degradation in the co-culture condition, supporting the contributory role of cytokines to heightened autophagy in TME.

Stromal fibroblasts have been implicated in the development of EGFR TKI resistance in lung cancer [7, 17, 18]. Nonetheless our findings suggest that TKI sensitivity of EGFR-mutated lung ADC is not reduced in the presence of TME. Increased cytokines in our TME model may contribute to other cancer-related characteristics, such as metastasis and aggressiveness [19], rather than TKI resistance. On the other hand, sensitivity to erlotinib and synergistic combination of chloroquine/erlotinib was consistently demonstrated in our HCC827 xenograft model.

There are two limitations of our study. First, we used only a single lung ADC cell line in our in vitro and in vivo model. Second, other components of TME (e.g. vasculature, immunological cells) have not been studied.

None of the authors have conflict of interest to declare.