Classical Hodgkin lymphoma (cHL) originates from mature B cells, as its tumor cells demonstrate clonal immunoglobulin heavy and light chain gene rearrangements. However, it seems that the Hodgkin-Reed-Sternberg (H-RS) tumor cells of cHL have lost their capacity to express B cell markers on the cell membrane [1]. CD20 is encoded by the MS4A1 (membrane-spanning 4 domains, subfamily A, member 1) gene. This gene encodes a B lymphocyte surface molecule which plays a role in the development and differentiation of B cells into plasma cells. One notable consequence of this loss is that the CD20 expression on the tumor cells is predominantly negative or, at best, faintly and/or heterogeneously positive in less than 20% of the H-RS cells [2].

Although the above mentioned immunophenotype is in the consensus, several authors have accepted higher rates of the CD20 expression as consistent with the diagnosis of cHL [3-10].

We have, together with others, seen such cases which have been otherwise typical of cHL and have shown an excellent response to cHL therapy. We therefore set out to review our cHL cases showing more than 20%, CD20 strong/homogeneous phenotype and to compare them with the rest of our cohort. Our population of cHL patients has been the subject of a previous study [16].

Our adult patients had been primarily treated with MOPP (Mechlorethamine, Vincristine, Procarbazine and Prednisone) or ABVD (Doxorubicine, Bleomycine, Vinblastine and Dacarbazine) in 88% of cases. Children were treated with COPP/ABVD.

The CD20+++ group was compared with the rest of the population for the clinical and for biological traits of their H-RS cells in order to determine possible distinctive qualities of this subset of cHL. The various characteristics were compared, using contingency tables analysis and the Chi-square test. The Kaplan-Meier overall and relapse-free survival was employed to explore the effect of CD20 expression and the log Rank test was used to define statistically significant differences. The Cox proportional hazard analysis was used to test the effect of age, stage, systemic symptoms, LeuM1 and CD20 expression on the risk of dying from cHL. All statistical analyses were performed, using the SPSS, 21 Version for Windows and p values of .05 or less were considered statistically significant.

Eleven of the patients were lost to follow-up and thus data were missing, including those of three patients for whom no age was available.

No difference in the primary chemotherapy was found between the two groups. Radiotherapy was distributed widely, and was not analyzed.

Table 1 shows a comparison of CD20+++ with the rest of the cohort, with emphasis on clinical features. More patients younger than 45 belonged to the CD20 (-) group to a significant degree (p=.016). All the other clinical characteristics observed, including gender, stage, bulky disease, systemic symptoms, the histological types and outcome showed no statistically significant differences between the two categories.

NED - no evidence of tumor

AWD-DOD - alive with disease or dead of tumor

In Table 2, we present a comparison between the study group and the remainder, regarding the standard immune markers of cHL, as well as those related with apoptosis. No significant difference was evident in the expression of CD30, FH6, Cas3, Cas8, Bcl-2, Bax and p53. In contrast, several CD15 antigens demonstrated a marked difference: LeuM1 and 80H5 were positive for non-sialyl-CD15 antigens in significantly more patients with negative/weak CD20 expression. On the other hand, Lex1, reacting with the sialyl-CD15 antigen was negative in more patients with the CD20 (-) expression.

In Table 3, we describe the expression of EBV/LMP1 and of measles virus antigens as they compare between the study group and the CD20 (-) group: no significant difference was found.

Table 4. The mean age was significantly lower in 145 patients with CD20 (-) when compared with the study group. In contrast, no significant difference in the mean follow-up periods was evident between the two groups.

Figure 1. No statistically significant difference was found in overall survival between the two subsets [CD20+++ versus CD20(-)] of patients, using the Kaplan-Meyer analysis.

Figure 2. No statistically significant difference was shown in the disease-free survival by the Kaplan-Meier analysis between the two categories of patients.

Table 6. The Cox proportional hazard analysis model was carried out on the association of prognostic factors with dying of cHL. The group of patients studied was representative of cHL (advanced stages and age older than 45 carried a significantly higher risk of dying of the disease). The Cox analysis did not establish CD20 expression as an independent prognostic factor.

Systemic B symptoms: presence as compared with absence3

The overall survival curves for the 152 patients stratified according to the CD20 status. By Kaplan-Meier analysis. 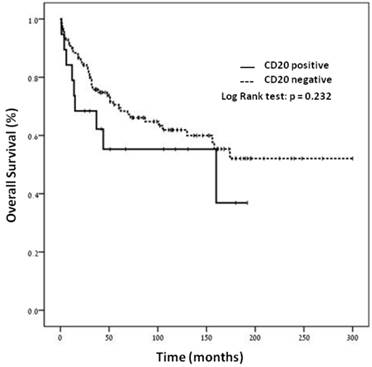 The disease free survival curves for the 116 patients stratified according to the CD20 status. By Kaplan-Meier analysis 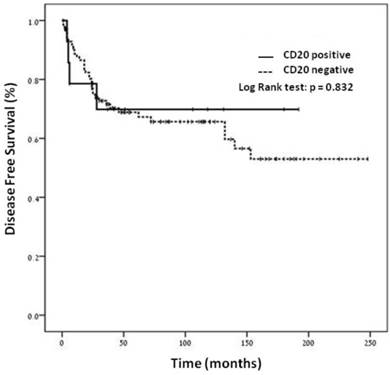 The purpose of this study was to determine the features of our classical Hodgkin lymphoma (cHL) patients with more than 20% strong and/or homogeneous CD20 expression (CD20+++).

The CD20+++ study group showed similar clinical and immunophenotypic findings regarding most features under investigation, when compared with the control group.

The clinical characteristics which were not statistically significant, when comparing between the two groups included gender, bulky disease, B symptoms and stage, all of which have prognostic significance. They included in addition the follow-up period and the outcome.

With regard to immunophenotyping, CD30 showed no difference between the study group and the remainder, nor did apoptosis-related or viral antigens, including EBV/LMP1.

Isolated features were found to differ between the two groups. Clinically, the only divergence was in the age group: most patients (92%) younger than 45 belonged to the CD20-negative or weak expression group to a significant degree (p=.016). Similarly, the mean age of 145 patients from the control group was significantly lower (35.80+-16.54 - p=.034). Comparable results have been obtained by other authors, but with an emphasis on an association between older age and CD20+++ expression [5].

CD20 functionally couples with the B cell antigen receptor (BCR) on the surface of activated B lymphocytes. They dissociate just before internalization of the BCR. Some have suggested that following this event, CD20 disappears. A problematic distribution of CD20 in fixed cells, due to extracellular brittle CD20 epitopes in the presence of fixation may be at the origin of this uncertain piece of information. As a consequence, staining is very weak. Nevertheless, it is clear that CD20, unlike the BCR, remains on the cell surface [17].

As anatomo-pathologists, we certainly can concur with the concept that in a small proportion of cases, varying from one laboratory to the other, lymph nodes fixation may have inconstant results.

Deans et al [18] further showed that the BCR associates with CD20 in non-stimulated cells. Lack of CD20 detection in the early stages may be due to the size of the protein and to the few epitopes empty for cell surface marking. The authors suggest that the success of the biotin attachment to surface CD20 varies and the staining is often poor [18].

Thus, although as a rule, CD20 stains very strongly B lymphocytes in benign and malignant lymphoid tissues, it is not completely excluded that the weak to absent expression of CD20 in the HRS cells of cHL may be a variety of fixation distortion. It is not excluded that a similar artifact may also well be related with the CD20 faint expression in the small B lymphocytes of chronic lymphatic leukemia/small lymphocytic lymphoma. It is of note that CD20 expression is not the only B-cell marker to have been described as faint or negative in cHL. This decreased expression has been related to a crippled IgH gene rearrangement. A loss of B-lineage-specific gene expression program has also been hypothesized [19]. However, a role for epigenetic silencing of B cell-specific genes has been recently demonstrated [20]. As for the OCT.2 and BOB.1 B-cell transcription factors they show an often weaker expression in cHL, which is however consistent with their presence [21].

The other attribute which discriminates the study from the control groups belongs to the differential expression of the CD15 antigens. Thus, the positive staining with the LeuM1 and 80H5 antibodies against the non-sialyl CD15 antigen, showed a significant preferential expression for CD20 that is weak or negative (p=.001 and p=.006, respectively). While negative staining with Lex1 antibody against the sialyl-CD15 antigen showed a preferential relation with a weak or negative CD20 expression. This finding has been described previously, though not in so many details [22] and it has been related by these authors with a differential composition of the lymph node population in cHL. The authors have related the predominance of CD15 antigen (supposedly non-sialyl-CD15 antigens) to a lymph node population rich in granulocytes. On the other hand, a strongly expressed CD20 was associated with a paucity in the reactive inflammatory infiltrate [16, 22]

We describe several combinations of the three markers: CD30; CD15 and CD20. They differ from those described by von Wasielewski et al [10], who found less than 5% of H-RS cell with strong CD20 positivity, while our study group included 24 such cases (12.6%).

In our research, the expression of CD20 is not an independent prognostic factor for dying of cHL. Other authors have associated CD20 expression to a worse prognosis [23]. Still others could not find an association with the outcome, as in our study [3, 9]. In only one instance did CD20 expression carry a good prognosis [4].

We conclude that, in the present investigation, the only attributes which distinguish our study group (CD20+++) from the control category are an older age and the absence of expression of the non-sialyl-CD15 antigen. In the previous papers, these features did not induce the authors into rejecting the diagnosis of cHL. The two groups are otherwise similar.

Our data sustain, therefore, that our study group is an integral part of cHL, though slightly distinct from the cohort at large, perhaps due to a variable fixation effect. This suggests that a cHL case with CD20+++ expression, should, for practical purposes be diagnosed as cHL, though with due caution.

19. Schwering I, Brauninger A, Klein U. et al. Loss of the B-lineage-specific gene expression program in Hodgkin and Reed-Sternberg cells of Hodgkin lymphoma. Blood. 2003;101:1505-1512