Ductal adenocarcinoma is the most common malignancy of the pancreas and worldwide pancreatic cancer is among the deadliest forms of cancer. It typically metastases aggressively at early stages and has an overall 5-year survival rate of only 8% [1]. The preliminary step for the process of metastasis is usually invasion through the extracellular matrix (ECM). Chronic inflammation, such as in chronic pancreatitis, significantly increases the risk of cancer [2,3] and lately the relationship between inflammation and cancer has been a subject of great interest.

Monocytes are among the first cells to infiltrate a damaged tissue where they differentiate into mature macrophages. In response to cytokines and other stimuli of their micro-environment macrophages polarize towards either pro-inflammatory type 1 (M1) or anti-inflammatory type 2 (M2) macrophages [4,5]. M1 macrophages are cytotoxic, they stimulate the immune system and inhibit tumor progression. Their phenotype is generally characterized by high interleukin (IL) 12 and IL23 and low IL10. M2 macrophages promote tissue remodeling and repair and activate angiogenesis. They enhance wound healing by suppressing the immune system. M2 macrophages are characterized by a low IL12 and IL23 and high IL10 phenotype [6,7]. This distinction is a simplified view of the two extremes of the continuum of macrophage polarization and due to their plasticity even mature macrophages can alter their polarization.

In the presence of cancer cells macrophages differentiate into tumor associated macrophages (TAMs) which is a distinct subpopulation of M2 polarized macrophages [6]. In various forms of cancers, including the pancreatic cancer, the presence of TAMs is associated with a worse prognosis [8]. TAMs increase the invasion of pancreatic cancer cells in cell cultures and in mouse models [9,10]. They facilitate cancer invasion e.g. by producing mediators that degrade the ECM, thus, allowing tumor growth and enabling the tumor cells to migrate through tissue barriers [9,11].

In in vitro -studies Granulocyte-Macrophage Colony Stimulating Factor (GM-CSF) and Macrophage Colony Stimulating Factor (M-CSF) have been used to polarize maturing monocytes towards type M1 and M2 macrophages, respectively [7,12,13]. Different additional stimuli are used to skew the polarization towards different subtypes of M1 and M2 macrophages [14]. IL6 is an inflammatory cytokine released by pro-inflammatory M1 macrophages [15]. It activates STAT-3 pathway that is associated with inflammation-induced tumorigenesis [16]. Lipopolysaccharide (LPS) activates the classical way via toll-like receptor that skews the macrophage polarization towards M1 and increases for example the expression of Tumor Necrosis Factor alpha (TNFα) in macrophages [17]. T-helper (Th) 2 cytokine IL4 activates monocytes to polarize towards the alternative M2 macrophages [18].

Human mononuclear cells were isolated from five different healthy subjects' blood samples by density gradient centrifugation with Ficoll-Paque Plus (Amershamn, Uppsala, Sweden). This was followed by paramagnetic bead separation with Human Monocyte Isolation Kit II (Miltenyi Biotec, Auburn, USA) according to the manufacturer's instructions. Blood samples from different individuals were processed and used in assays separately. Macrophages from the same donor were used as internal controls in each of the study settings.

The human pancreatic adenocarcinoma cell lines MiaPaCa-2 (primary tumor cell line) and HPAF-II (metastatic tumor cell line) were purchased from the American Type Culture Collection. MiaPaCa-2 and HPAF-II were either cultured alone using the same media as for the macrophages or added to the macrophage cultures after 5 days of monocyte isolation and differentiation. The study has been approved by Ethics Committee of Helsinki University Central Hospital.

To assess the surface expression of the differentiated macrophages they were cultured on Nunc UpCell dishes (Thermo Scientific). First, the isolated monocytes were differentiated into macrophages with GM-CSF or M-CSF for 5 days. Then the additional stimuli IL4 + LPS/IL6 and/or MiaPaCa-2 cells or neither were added and the cells were cultured for further 48 hours. The cells were detached from the UpCell dishes according to the manufacturer's instructions by incubating the cells in room temperature for 40 minutes. After detaching the cells, macrophages were separated from the cancer cells with anti-CD11b magnetic micro beads (Miltenyi Biotec Inc., Auburn, USA) and labeled with selected antibodies for 20min in room temperature. They were acquired on FACS Calibur (CellQuest Pro software; BD Bioscience) flow cytometer and the data was analyzed with WinMDI software (v2.8). The antibodies we used were Mouse Anti-Human FITC and PE CD14, FITC CD16, PE CD80, APC CD86, PE CD163, APC CD206, PE CD209, PE Mouse IgG1 κ Isotype Control, APC Mouse IgG1 κ Isotype Control, FITC Mouse IgG1 κ Isotype Control (BD Pharmingen, San Diego, USA).

Cells were cultured on 8-well coverslip dishes (Nunc, Thermo Scientific, Rochester, USA) coated with 60 μl Matrigel (BD Biosciences, San Jose, USA). As described, the monocytes were first differentiated into macrophages with GM-CSF or M-CSF on Matrigel for 5 days, after which the additional stimuli IL4+LPS or IL6 were added. Simultaneously was added MiaPaCa-2 and HPAF-II cells, which were stained with fluorescent dye (CellTracker Green CMFDA, Invitrogen, Eugene, USA). We let the cells settle in a standard cell incubator for 24 hours before the fluorescence microscopy.

The cancer cell migration on Matrigel was assessed by recording their movement with 30 min intervals for 24 hours in fluorescence microscope equipped with coolled CCD camera (Sensicam, PCO, Germany) and humidified, temperature (+37 ºC) and CO2 (5 %) controlled chamber (OKOlab, Ottaviano, Italy), as previously described [19]. The data was analyzed using ImagePro software (v 7.01, Media Cybernetics, Rockville, MD, USA). The stained cancer cells were observed with and without the presence of the differentiated macrophages and the stimuli IL4 + LPS or IL6.

For the cytokine array the monocytes were first differentiated into macrophages for 5 days with culture media supplemented with either GM-CSF or M-CSF. At this point, the media was refreshed in all cell cultures and the additional stimuli (IL4 + LPS for M-CSF stimulated cells and IL6 for GM-CSF stimulated cells) and/or MiaPaCa-2 cells were added to the cell cultures. After 24 hours of incubation in standard 37 ºC and 5 % CO2 incubator, the cell culture media was collected. The collected medium was concentrated from 1.5 ml by 3K filters (Amicon Ultra Centrifugal Units, Millipore Corporation, Billerica, MA, USA). The concentrated medium was incubated with pre-coated Human Cytokine Array Panel A (Proteome Profiler Arrays, R&D Systems) according to the manufacturer's instructions. The arrays were imaged with the Odyssey infrared imager (Licor Biosciences, Lincoln, USA). The dot blots were analyzed densitometrically with Odyssey software (Licor Biosciences).

To detect the difference between continuous variables we used the nonparametric Mann-Whitney U test or Wilcoxon's signed-rank test (paired measurements). p values <0.05 were considered statistically significant. The results are presented as mean ± standard error of mean (SEM). In the migration assay confidence intervals (CI) for fold change were calculated according to the rules of error propagation as asymptotic confidence intervals. Cytokine array results are given as percentage between negative and positive control recorded on each array.

Both GM-CSF and M-CSF differentiated macrophages increased the migration rate of pancreatic cancer cells. This could be reversed by adding IL6 to GM-CSF or IL4 and LPS to M-CSF differentiated cell culture. MiaPaCa-2 and HPAF-II cell invasion rate was measured in Matrigel cultured alone and with macrophages when they were cultured in medium containing (A) GM-CSF with and without IL6 and (B) M-CSF with and without IL4 and LPS. Error bars show the standard error of mean. *p<0.05. 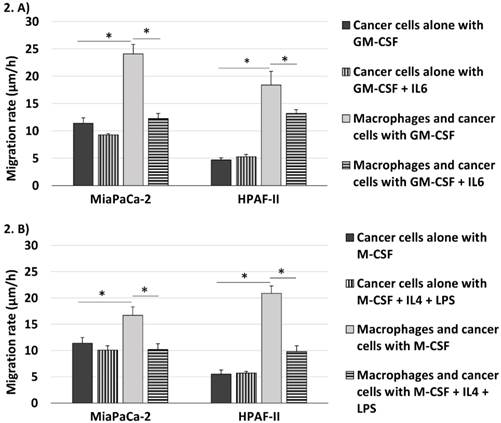 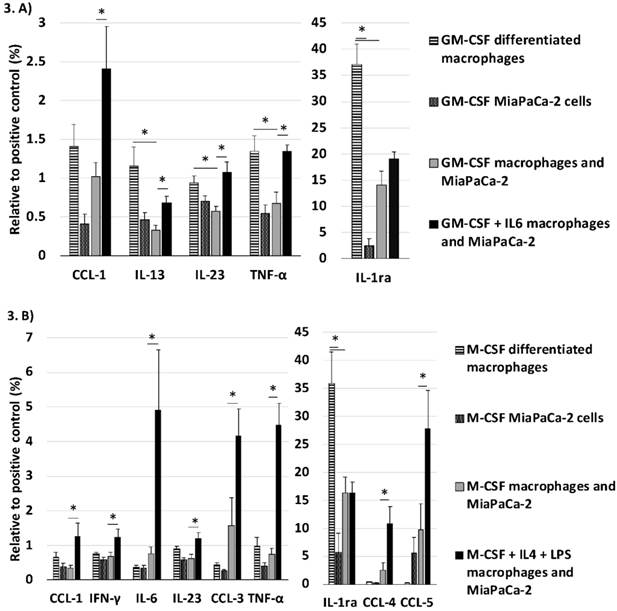 In both GM-CSF and M-CSF differentiated macrophages the secretion of interleukin 1 receptor antagonist (IL-1Ra) was significantly reduced when co-cultured with pancreatic cancer cells, suggesting an inflammatory response towards pancreatic cancer cells. IL-1Ra binds to IL1 receptor without activating it. IL1α and IL1β are inflammatory cytokines that have been associated with metastasis worse prognosis in many types of cancer [23]. Interestingly, in our study the secretion of IL1α and IL1β remained low in all cell cultures (data not shown). Of the cytokines observed TNFα and IL23 were elevated by the additional stimuli in both GM-CSF and M-CSF differentiated co-cultures. The weakness of this setting is obviously that we cannot determine if the increased cytokine secretion originates from macrophages or pancreatic cancer cells. TNFα is a cytokine that participates in inflammation, immunity, stimulation of growth factor synthesis, and apoptosis. It conducts a delicate balance between cytotoxicity and growth promotion and produces both pro- and anti-tumor effects [24]. In pancreatic cancer the clinical use of single TNFα treatment does not improve prognosis [25]. IL23 is one of the inflammatory cytokines characteristically secreted by pro-inflammatory M1 macrophages [6,7]. It is pivotal in autoimmune and chronic inflammation [26]. Its role in tumor progression is controversial but studies suggest that it is associated with increased cancer metastasis [27].

In the M-CSF differentiated co-cultures the addition of IL4 + LPS increased additionally the secretion of inflammatory IL6, C-C chemokine ligand (CCL) 1, CCL3, CCL4, CCL5, and INFγ. The role of CCL1, CCL5 (also known as Regulated upon Activation, Normal T-cell Expressed, and Secreted, RANTES), a target gene of NF-κB, and CCL3 (also known as Macrophage Inflammatory Protein 1 alpha, MIP-1α), CCL4 (MIP-1β) is still unclear in pancreatic cancer progression. They are in central role in inducing anti-tumorigenic immune responses but they are also associated with progression and metastasis in some types of cancer [28,29].

Due to the complexity of the interactions of stromal elements in cancer surroundings in vivo these cytokines could have different effects on pancreatic cancer migration when exposed to other cells involved in inflammatory interactions, for example, the tumor-promoting actions of IL23 via Th-17 cells [30]. We do not suggest that these individual inflammatory cytokines by themselves inhibit the migration of pancreatic cancer cells but our study demonstrates the overall enhancement of the inflammatory status of macrophages and their microenvironment seem to inhibit pancreatic cancer cell migration in Matrigel. This needs further investigation in future studies.

As this is an in vitro study it is impossible to draw direct conclusions to in vivo situation. It would be beneficial to study the relevance of these findings in enhancing the inflammatory status of macrophages in in vivo models. Since macrophages participate essentially in pancreatic cancer invasion and the cancer cells are able to influence macrophage polarization and cytokine expression even after their maturation it is crucial to find ways to enhance the inflammatory competence of macrophages and further study their utility as potential targets for therapy.