Survival and Symptom Relief after Palliative Radiotherapy for Esophageal Cancer

Purpose: The aim of this study was to assess the 6-months dysphagia-free survival, improvement in swallowing function, complication rate, and overall survival in patients with incurable esophageal cancer treated with palliative radiotherapy.

Methods: We retrospectively reviewed data from 139 patients (median age 72 years) with advanced/recurrent incurable esophageal cancer, who were referred to 3 German radiation oncology centers for palliative radiotherapy between 1994 and 2014. Radiotherapy consisted of external beam radiotherapy (EBRT) with 30 - 40.5 Gy/2.5 - 3 Gy per fraction, brachytherapy alone (BT) with 15 - 25 Gy/5 - 7Gy per fraction/weekly and EBRT + BT (30 - 40.5 Gy plus 10 - 14 Gy with BT) in 65, 46, and 28 patients, respectively. Dysphagia-free survival (Dy-PFS) was defined as the time to worsening of dysphagia for at least one point, a new loco-regional failure or death of any cause.

Conclusions: Radiotherapy leads to symptom improvement in the majority of patients with advanced incurable esophageal cancer. The present results favor EBRT ± BT over BT alone. Due to the retrospective nature of this study, imbalances in baseline characteristics might have contributed to this finding, and further trials appear necessary.

More than 50% of esophageal cancer patients present with locally advanced stage or distant metastases with tumor related symptoms and/or poor general condition [1, 2]. The most common cancer-related complication in these patients is dysphagia with an increasing rate as the disease progresses, leading to nutritional compromise, pain, reduced performance status and deterioration of quality of life [3, 4]. Many of these patients with severe clinical symptoms are not fit enough to undergo surgical resection or curative radiochemotherapy [5, 6]. The latter approaches are not suitable for patients with distant metastases either [7]. In symptomatic patients, long-term palliation of dysphagia is an important goal of therapy. Various palliative treatment modalities have been used in an attempt to relieve dysphagia and improve quality of life for the remaining life time. These include stent placement, dilation, external beam radiation therapy (EBRT), brachytherapy, chemotherapy, laser treatment, photodynamic therapy or ablation [8, 9]. Of those approaches endoluminal stenting, radiation therapy, or a combination of both are most commonly used [10]. Esophagectomy for palliation is not recommended due to the associated high morbidity and mortality rate. Thermal and chemical ablative therapies provide acceptable dysphagia palliation but have an increased requirement for re-interventions and for adverse effects. Chemotherapy alone for symptom relief might be possible in some patients, but it takes several weeks to achieve this effect. Patients in poor general condition are not fit enough to undergo effective chemotherapy [11]. Development of distant metastases during the course of disease is common. Thus, oncologists often chose local treatment options for relief of initial local symptoms and postpone chemotherapy for the treatment of systemic disease. Radiotherapy is a potent local treatment option, which can provide symptom relief and prolongation of survival. Its effects were the subject of the present retrospective study. The primary endpoint of the study was the 6-month dysphagia progression-free survival (6-mo Dy-PFS). Secondary endpoints were overall survival, time to relapse of dysphagia to the pretreatment status (or worse), time to worsening of dysphagia by at least one point, and complication rate.

We retrospectively reviewed data from 189 patients with advanced/recurrent esophageal cancer, who were referred to one of three German radiation oncology centers (Bochum, Herne, Witten) for palliative radiotherapy from 1994 to 2014. Patients with histologically confirmed squamous cell or adenocarcinoma of the esophagus, considered too advanced or medically unsuitable for radical treatment (with or without metastatic disease), symptomatic with dysphagia score of 1-4 (0= no dysphagia, Table 1) were eligible. Patients were excluded for the following reasons: previous radiochemotherapy, presence of an esophageal fistula, simultaneous other primary cancer. One-hundred thirty nine patients fulfilled the inclusion criteria and were enrolled in this study. Patients' characteristics are summarized in Table 2. The pre-treatment evaluation included a medical history and physical examination, complete blood count, computed tomography of the neck/chest/abdomen and an esophagogastroscopy and endosonography, if technically possible. A bronchoscopy was carried out if there was a suggestion on computed tomography or clinical evidence of airway involvement.

Characteristics of all patients

Radiotherapy consisted of EBRT with 30-40.5 Gy/2.5-3 Gy per fraction, 5 days a week in 65 patients. The target volume consisted of the primary esophageal tumor with margins of 1 - 3 cm in the cranial caudal direction and 1 cm circumferentially. Endoluminal treatment was administered by a high dose rate (HDR) afterloading device with an iridium192 source. For the treatment a blind ending gastric tube of 10 mm was passed through the tumor stenosis. The applicator with a centimeter scaled dummy chain for determination of the irradiated length was then inserted. The irradiation length included the tumor stenosis with a safety margin of 1-2 cm above and below. The single dose of each HDR treatment was 5-7 Gy specified to 1 cm from the applicator surface. Brachytherapy (BT) alone was performed in 46 patients with a total dose of 15-25 Gy/5 Gy per fraction/weekly (Table 3). Twenty-eight patients underwent EBRT (30 - 40 Gy) plus 1 to 3 fractions of BT with a dose of 5 - 7 Gy per fraction/weekly. A stent was placed in 18 patients prior to and in 25 patients after radiotherapy. Chemotherapy was administered to 18 patients prior to and 39 patients after radiotherapy.

Dysphagia was measured on a five-point dysphagia scale (Table 1). Acute treatment-related toxicity was graded according to the National Cancer Institute's Common Terminology Criteria for Adverse Events, version 3.0 (CTC 3.0), except for dysphagia. For the dysphagia, the above mentioned dysphagia score was used. Patients were assessed weekly during the treatment and each 2 - 4 weeks thereafter. At week 8-10, all patients underwent a reassessment of the local disease with either an endoscopy and/or CT. This was repeated at the time of dysphagia progression to confirm whether progression was secondary to disease or stricture. After finishing radiotherapy patients were followed for six months until symptomatic or luminal disease progression, and every 2 months thereafter if clinically feasible. At each visit, patients were assessed with a medical history, physical examination, dysphagia score, toxicity score, weight and performance status (PS).

Statistical analyses were performed using the SPSS software (version 20.0). Overall survival (OS) was defined as death from any cause, dysphagia-free survival (Dy-PFS) was defined as the time to worsening of dysphagia by at least one point, loco-regional failure or death of any cause.

All time estimates began with the 1st day after start of radiation therapy to the date of first failure or the date of last clinical visit, whichever occurred first.

There were no grade 5 toxicities. Mucositis ≥grade 2 (39%), temporary worsening of general condition (29%) and temporary increase of pain (25%) were the most common acute toxicities of the treatment. Bacterial pneumonia and hematologic toxicity ≥grade 2 were observed in 6% and 4% of the patients, respectively. There were 3 ulcerations in the context of persistent or recurrent tumor, 2 patients were treated with stent + EBRT and 1 with induction chemotherapy + BT. In 6 patients a fistula formation was observed, 2 were treated with BT, 3 with stent + EBRT and 1 patient with induction chemotherapy + stent + EBRT. In 7 patients esophageal strictures were observed, requiring repeated bouginage.

Changes in dysphagia score over time in all patients. 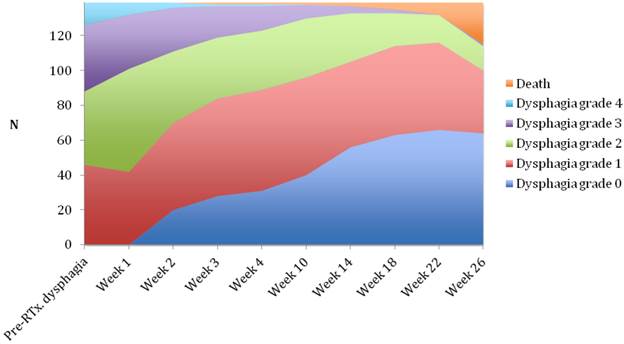 Changes in dysphagia score over time in the brachytherapy group.

Changes in dysphagia score over time in the EBRT ± brachytherapy group. 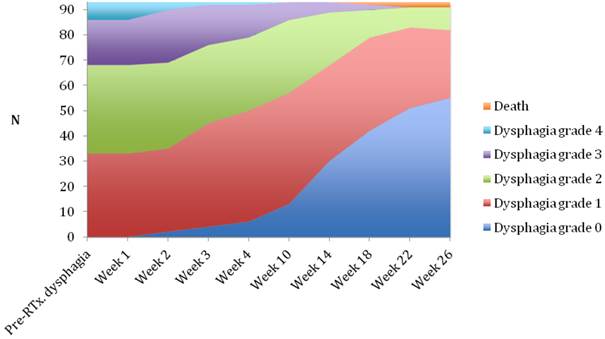 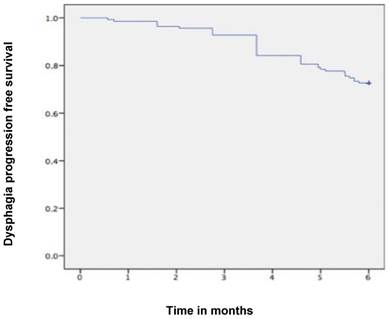 Kaplan-Meier curves for dysphagia progression free survival in the subgroups. 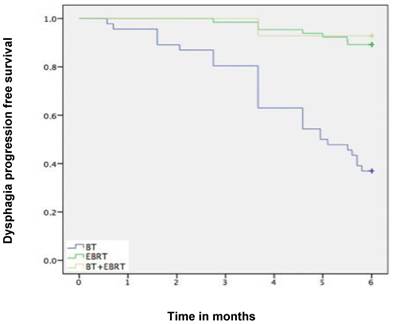 Kaplan-Meier curves for overall survival in the whole cohort 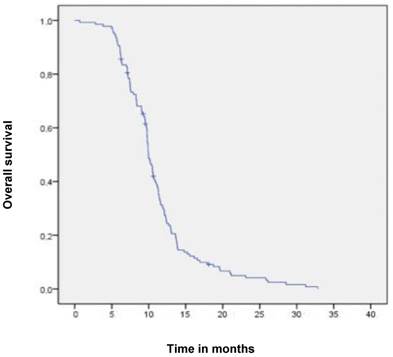 We report our multicenter 20-year experience with 139 incurable esophageal cancer patients treated for symptom relief with palliative RT. The overall treatment concept was individualized and included various combinations of stent placement, chemotherapy, and RT. Performance status, local tumor extension/obstruction, distant metastases and comorbidity were assessed before the overall concept was chosen. The optimal treatment regimen for palliation of dysphagia in locally advanced esophageal cancer is still controversially discussed [12]. However, effective symptom relief has been reported in many randomized and non-randomized clinical trials. It has been shown that stent placement alone was inferior to stent plus BT and stent loaded with radioactive seeds [13, 14]. A further randomized trial (n=84 patients) compared stent alone to stent and EBRT, 30 Gy in 10 fractions [15]. Dysphagia scores improved significantly in both groups following stent insertion. However, dysphagia relief was more sustained after additional EBRT (7 vs. 3 months, p = 0.002). Overall median survival was significantly longer after additional EBRT (180 vs. 120 days, p = 0.009). There was no treatment-related mortality, and the incidence of complications was similar in the two groups. A fourth randomized study (n=219 patients) examined whether the combination of HDR BT and EBRT is superior to HDR BT alone for the palliation of esophageal cancer [16]. All patients received two fractions of HDR BT within 1 week (8 Gy prescribed at 1cm from source center). Patients randomized to EBRT received 30 Gy in 10 fractions. The primary outcome was dysphagia-relief experience (DRE). Median survival was 6 months (18% survival rate at 1 year). DRE was significantly improved with combined therapy, for an absolute benefit of +18% at 200 days from randomization (p = 0.019). In longitudinal regression analyses, scores for dysphagia, odynophagia, regurgitation, chest pain and performance status were all significantly improved. In contrast, weight, toxicities and overall survival were not different between study arms. Together, these data from 4 individual studies suggest that combined therapy with stent + BT, stent + EBRT or BT + EBRT is well tolerated and relatively safe. Yet not all possible combinations have been compared in randomized trials.

Patients with distant metastatic stage IVB esophageal cancer with dysphagia due to the primary lesion might best be treated with chemotherapy plus local measures [17]. The authors investigated 40 patients. Treatment consisted of two courses of chemotherapy (5-fluorouracil and cisplatin) and concurrent irradiation of 40 Gy in 20 fractions to the esophageal primary tumor. Dysphagia score improved in 75% of the patients. Seventeen of the 20 patients (85%) who had required nutritional support at baseline improved their oral intake to no longer need the support, in a median time of 43 days. Disease control rate of the primary lesion was 95%, including 12 patients (30%) who achieved a complete response. The median survival was 10 months, and the 1-year-survival rate was 45%. Major toxicities (grade 3 or 4) involved hemoglobin (23%), leukocytes (15%), neutrophils (20%), anorexia (10%), nausea (3%), esophageal perforation (5%) and febrile neutropenia (3%). Two patients (5%) died within 30 days of terminating radiotherapy.

Murray et al. performed a retrospective study, which shares important similarities with ours [18]. They analyzed data from 148 patients with histologically proven esophageal cancer, who were unsuitable for radical treatment (2005-2010). The median age of their patients was 74 years (range, 31-91). Forty-nine percent of patients were WHO PS 2 or 3, 70% had adenocarcinoma (only 27% in our study), 58% had locally advanced disease, and 28% had metastatic disease. Ninety-three percent of patients complained of dysphagia prior to radiotherapy, and 6% had a stent placement. Eighty-nine percent of patients received a 2-D planned dose of 20 Gy in 5 fractions, i.e. a significantly lower dose than in most other studies discussed here, also in terms of biologically effective dose. Following radiotherapy, 75% of patients experienced an improvement in dysphagia and 25% of patients gained weight. Dy-PFS was not analyzed. Twenty-six percent of patients required subsequent insertion of an esophageal stent and a further 3% received retreatment with radiotherapy. The median stent (and retreatment)-free survival was 4.9 months. In our study 18% of patients had subsequent stent insertion and median response duration after RT was 5 months. Murray et al. reported median overall survival of 6.1 months (1-year survival 29%), compared to 10 months (30%). These data suggest that short-course radiotherapy could be considered in patients with limited survival expectation, e.g. those with poor PS and/or widespread metastatic disease. Important caveats exist regarding inter-study comparisons, because inhomogeneous populations were included, comprised of patients with or without distant metastases, good or poor PS etc. Limitations regarding our own study also include patient selection for the different treatment modalities and group sizes. In line with the randomized IAEA study in squamous cell cancer [16], our data suggest that BT alone might not be the preferred RT option. Excellent palliation rates were observed after EBRT with or without BT, i.e. 6-months Dy-PFS of 90 ± 4% after EBRT and 92 ± 5% after EBRT + BT. A worsening back to the initial dysphagia score or worse was uncommon (8% after EBRT and 7% after EBRT + BT, compared to 35% after BT alone).

Radiotherapy leads to symptom improvement in about 70% of patients with esophageal cancer. Considering longer symptoms relief period and progression-free survival EBRT ± BT appears superior to BT alone. However, the present results were not obtained in the context of a randomized trial.