Top
The significance of circadian...
Molecular structures of DEC1 and...
Immunohistochemical detection of...
Factors upstream and downstream...
Biological functions of DEC1 and...
Conclusion
Acknowledgements
References

DEC1 and DEC2 Crosstalk between Circadian Rhythm and Tumor Progression

The significance of circadian rhythm

All living beings from bacteria to human have circadian rhythm, which is dominantly regulated by clock genes [1, 2]. The molecular mechanism of circadian rhythm depends on negative feed-back system by clock genes. CLOCK and BMAL1 which are clock products bind to E-boxes in the promoters of DEC1, DEC2, PER1 and CRY1 which produce DEC1, DEC2, PER1, CRY1 and CRY2 proteins [3-6]. These proteins are modified by ubiquitination, phosphorylation, and SUMOylation for eventual degradation [7-11]. The remaining proteins either make PER and CRY or DEC1 and DEC2 dimers and suppress the CLOCK/BMAL1 transactivation [3-6, 12, 13]. This negative feed-back system plays important roles in 24-hour rhythmic regulation for circadian rhythm in suprachiasmatic nucleus (SCN), peripheral tissues, or mesenchymal stem cells (MSCs) [14-16]. The disturbance of circadian rhythm may induce metabolic syndrome, diabetes, Alzheimer's disease, depression, sleep disorder, or cancer [17-25]. Night work may increase cancer risk, possibly via suppression of melatonin release [17]. Night time workers have 1.76-fold higher risk for prostate cancer, 2.09-fold higher risk for lung cancer, and 1.74-fold higher risk for colon cancer compared to individuals who have never worked at night [17]. Excessive daytime sleeplessness in children is associated with a high incidence of 60% of cancer and 80% of children with neoplasm in the central nervous system and sleep disorder is account for 40% of the entire group of children with cancer [24]. He Y et al. have shown that mutations in the DEC2 gene are involved in human short sleep phenotype and that DEC2 regulates sleep length in mammals [25]. Therefore, regular life-style may stabilize negative feed-back system and therefore maintain the circadian rhythm. On the other hand, irregular life style may disrupt the negative feed-back system and circadian rhythm and consequently induce various diseases and carcinogenesis.

Chronotherapy is useful for treatment of anti-tumor drugs in terms of its minimum cytotoxicity and effectiveness in tumor suppression, depending on the timing of administration [46]. The evidence revealed that the timing of administration of 5-fluorouracil (FU) affected the degree of the cytotoxicity in cancer patients [46, 47]. It was observed that the administration of treatment at 4:00 a.m. resulted in minimum cytotoxicity in cancer patients. In addition to that, CLOCK/BMAL1 modulates sensitivity to drug-induced toxicity, and DEC1 and DEC2 are downstream factors of CLOCK/BMAL1 [4, 48]. These facts imply that tumor cells have circadian rhythm like normal cells, suggesting the need to know the persistent trend of clock genes in tumor cells. It is certain that clock genes play an important role not only in normal cells but also tumor cells. These results indicate that tumor progression is closely associated with circadian rhythm.

Human DEC1 has 412 amino acid residues with bHLH and Orange domains, whereas human DEC2 has 482 amino acid residues with alanine and glycine-rich regions in the C-terminus [49]. DEC2 has high (97%) and moderate (57%) similarities to the bHLH region and the Orange domain of DEC1, respectively [50]. The molecular structures of DEC1 and DEC2 are similar to Hairy/E (Sp1) /HES proteins, though DEC1 and DEC2 do not possess WRPR motif, which is necessary for interaction with corepressor Groucho in the C-terminus [50-52]. DEC1 and DEC2 are expressed in a variety of developing and adult tissues as well as MSCs [16, 49, 53-55]. Generally, DEC1 binds to E-boxes to suppress the target genes via histone deacetylase (HDAC) [4, 55-57]. We demonstrated for the first time that DEC1 deletion mutants of the basic region and a point mutation of the basic region R65A have dominant negative effects on CLOCK/BMAL1 transactivation [4]. Also, we and other groups have shown that a DEC1 deletion mutant of the basic region does not bind to E-boxes and that STAT-dependent cis-elements do not suppress the target genes [4, 55, 57]. Interestingly, the DEC1 deletion mutant of the basic region suppressed metastasis of breast cancer cells, whereas DEC1 overexpression induced metastasis in these cells [58]. Moreover, DEC1 upregulates an apoptosis-related factor survivin through the basic region, whereas a point mutation of DEC1 basic region has little effect on the survivin activity [59].

Immunohistochemical detection of DEC1 and DEC2 in tumor tissues

We have shown that DEC1 is highly expressed in nuclei and cytoplasm of tumor cells compared with adjacent non-tumor cells, which are in line with other studies [39, 40, 62-71]. Previous immunohistochemical analysis showed that DEC1 was localized both in the nuclei and cytoplasm of tumor cells [39, 40, 62-71]. The significance of DEC1 localization in cytoplasm is that. DEC1 regulates apoptosis-related factors via mitochondrial pathway, and regulates phosphorylation of SMAD3 via TGF-β receptor I in EMT [39, 41, 42]. However, we speculate that DEC1 regulates target genes that are not only in nuclei but also in cytoplasm. In immunohistochemistry, DEC1 expression is significantly associated with tumor grade, one-year recurrence, the age of patients, tumor emboli, depth of invasion, lymph node metastasis and pTNM, poor histological differentiation, malignancy and survival rate in invasive breast ductal carcinoma, oral squamous cell carcinoma, esophageal squamous cell carcinoma, hepatocellular carcinoma, or pancreatic ductal adenocarcinoma (Table 1) [44, 64-67]. In addition to that, DEC1 overexpression was positively associated with hypoxia inducible factor 1 (HIF-1) α and Ki-67 in gastric cancer, invasive breast ductal carcinoma and non-small cell lung cancer, whereas it was negatively associated with claudin-1 expression in invasive breast ductal carcinoma [62-64, 68, 69]. Generally, tumor cells are exposed to various stresses such as hypoxia and abnormalities of cytokines and metabolism [72]. Hypoxia treatment immediately induced DEC1 in human oral cancer cells [26]. The reason why DEC1 is highly expressed in tumor cells may associate with various stress of tumor environment. DEC1 expression levels are also decreased in tumor cells compared with adjacent non-tumor cells of non-small cell lung carcinoma (adenocarcinoma and squamous cell carcinoma) [70, 71]. As described above, many reports have shown that immunohistochemical analysis of DEC1 and DEC2 in epithelial tumors, but a few group have reported about the mesenchymal tumors [73]. Future studies are needed for further clarification.

We have shown that DEC2 is subtly expressed in tumor cells compared with adjacent non-tumor pancreatic duct cells in human pancreatic cancer, whereas another group showed that DEC2 is highly expressed in tumor cells of endometrial carcinoma compared with the non-tumor cells (Table 2) [74, 75]. More discrepancies were shown in some reports on PER1 expression in surgical resections. For example, PER1 is highly expressed in tumor cells of oral squamous cell carcinoma and pancreatic cancer compared with adjacent non-tumor cells [45, 76]. However, Chen et al. showed that PER1 is subtly expressed in tumor cells compared with adjacent non-tumor cells in oral squamous cell carcinoma [77]. Taken together, these observations suggest that the expression of clock genes in tumor tissues varies in different laboratories. As clock genes have shown circadian expression in various tissues, we fixed the sampling time for immunohistochemistry as described previously [76]. It remains unclear these discrepancies of immunohitochemical data. Generally, inpatients are exposed to various stress such as sleep disorder and chemotherapy. DEC1, DEC2 and PER1 were affected by various stress such as paclitaxel and cisplatin [42, 45, 78]. Almost articles of DEC1 and DEC2 using inpatient samples have not been mentioned the possibilities of these stress may affect the expression of DEC1 and DEC2. Therefore, there are, at least, two possibilities of these discrepancies. At first, clock genes showed circadian expression in various tumor cells. Therefore, only one point preparation for immunohistochemistry may not enough for clock genes. Secondary, researchers should consider that the expression of clock genes are affected by various stress described as above. Future studies needs to require some points and same time preparation for immunohistochemistry, and divide the data with or without chemotherapy.

Factors upstream and downstream of DEC1 and DEC2

Up and downstream factors of DEC1. 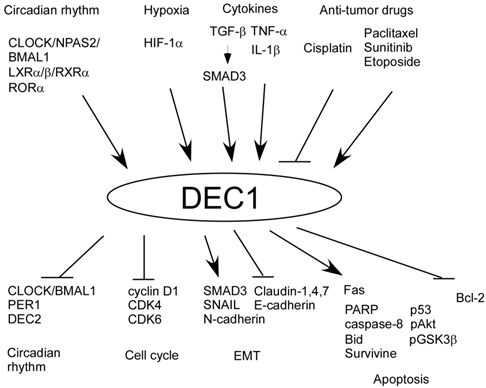 Also, we have shown that there are various factors upstream of DEC2 (Figure 2). For example, TGF-β and polyinosinic -polycytidylic acid (Poly IC) induces DEC2 expression in human pancreatic cancer cells BxPC-3 and in human mesangial cells respectively [74, 87]. Additionally, we have shown that there are many factors downstream of DEC1 and DEC2. DEC1 negatively regulates DEC2, PER1, cyclin D1, CDK4, CDK6, CLOCK/BMAL1/2, claudins 1, 4, 7, E-cadherin, and Bcl-2, whereas DEC1 positively regulates phosphorylated SMAD3 (pSMAD3), SNAIL, N-cadherin, pAkt, pGSK3β, p53, caspase-8, poly (ADP-ribose) polymerase (PARP), Fas, and Bid. On the other hand, DEC2 negatively regulates DEC1, CLOCK/BMAL1/2, PER1, VEGF, SLUG, CCL5, retinoic acid-inducible gene-I (RIG-I), IFN-β, Bim, caspase-8, PARP, p53, Bax, muscle creatine kinase, CYP2D6, and Twist1, whereas DEC2 positively regulates cyclin D1 [3, 4, 26, 27, 39-42, 60, 61, 74, 78-80, 87, 88]. In particular, TGF-β is closely associated with circadian rhythm and it resets clock via DEC1 in rat-1 cells [81]. In addition to that, we showed SMAD3 has circadian expression [16]. Therefore, it is possible that TGF-β may crosstalk between circadian rhythm and tumor progression via SMAD3 and DEC1, and that the circadian rhythm of DEC1 and DEC2 may be regulated by SMAD3. However, the significance of clock reset by TGF-β in tumor progression still remains unclear. It would be of interest to analyze the circadian expression of DEC1 and DEC2 using a tumor injection model in Smad3 knockout mice for understanding crosstalk between TGF-β and circadian rhythm.

Biological functions of DEC1 and DEC2 in normal and tumor cells

Interestingly, abnormalities of DEC1 and DEC2 cause various phenomena in mice and human. A loss of DEC1 induces an autoimmune disorder in mice [92]. DEC1 knockdown or overexpression in MSCs affects the circadian phase of DEC2 and Per1 [93]. A loss of both DEC1 and DEC2 induces sleep disorder and psychiatric diseases in mice [94]. Meanwhile, DEC2 has been found to regulate sleep length in human [25]. In conclusion, DEC1 and DEC2 mediate crosstalk between circadian rhythm and physiological actions.

Up and downstream factors of DEC2. 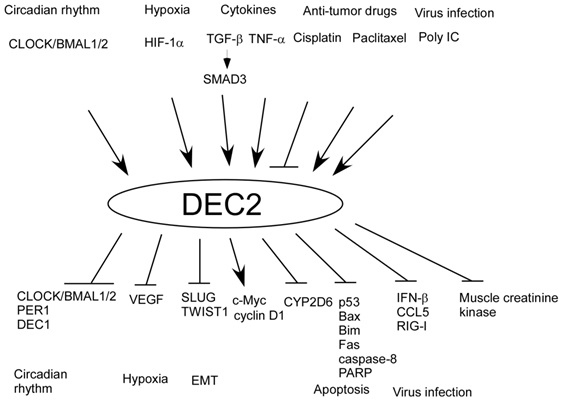 Several papers have reported that DEC1 induces apoptosis, EMT and senescence in tumor cells [39, 41, 67, 85, 96]. On the contrary, DEC2 inhibits apoptosis, EMT and metastasis, showing circadian expression in sarcoma and hepatocellular carcinoma cells [26, 27, 41, 74, 97]. Given that DEC1 and DEC2 play an important role in tumor progression under circadian rhythm, it would be possible that they can be used as target genes for chronotherapy.

However, as mentioned above, the function of clock genes in tumor cells is still controversial [43, 77, 98]. PER1 has anti-apoptotic effects on human oral cancer, pancreatic cancer and hepatocellular carcinoma cells, whereas PER1 has pro-apoptotic effects on human colon cancer and prostate cancer cells [43, 45, 76, 98]. BMAL1 overexpression induces apoptosis by oxaliplatin, inhibiting the colony formation of human colon cancer cells. Additionally, BMAL1 siRNA induces apoptosis and inhibits colony formation of human malignant mesothelioma cells [99, 100]. Li Y et al. have shown that DEC1 has anti-apoptotic effects, regulating survivin under serum-starvation, whereas DEC1 has pro-apoptotic effects, involving DNA damage [59, 85]. It has been found that only medium change affects the expression of PER1, PER2, and BMAL1 in culture cells, upregulating or downregulating their expression in a time-dependent manner [101]. Taking these observations into consideration suggests that DEC1 and DEC2 have pro and anti-apoptotic effects, depending on the time of medium change and sample preparation. As described earlier, differences in C-terminal regions also may affect these functions. Since DEC1 and DEC2 regulate each other by binding their E-boxes, it would be of interest to examine whether combination treatment of DEC1 and DEC2 (overexpression or knockdown) influences tumor progression.

We would like to thank Shenli Hew from the Department of Clinical Research Center, Wakayama Medical University, for proofreading and editing the manuscript.

47. Altinok A, Lévi F, Goldbeter A. Identifying mechanisms of chronotolerance and chronoefficacy for the anticancer drugs 5-fluorouracil and oxaliplatin by computational modeling. Eur J Pharm Sci. 2009;36:20-38