Predictors of Mastoiditis after Intensity-Modulated Radiotherapy in Nasopharyngeal Carcinoma: A Dose-Volume Analysis

Nasopharyngeal carcinoma (NPC) is a distinct entity of head and neck cancer, with a specific pathology, epidemiology and treatment modalities. Given the anatomic location and radio-sensitivity of the primary tumor, radiotherapy is usually the primary treatment modality used to achieve local and regional control in NPC1. Radiation-induced mastoiditis, characterized by mastoid opacification, vertigo, tinnitus, hearing loss and other symptoms, is the most common radiotherapy-associated otologic complication associated with NPC2. The incidence of mastoiditis following conventional two-dimensional radiotherapy (2D-CRT) has been reported in several studies and ranges from 15% to 50%3-6.

Intensity-modulated radiotherapy (IMRT) was a major break-through in the treatment of NPC, and is capable of producing highly conformal dose distributions with steep dose gradients and complex isodose surfaces. The design of appropriate dose constraints for the organs at risk (OARs) during optimization of IMRT treatment plans can significantly reduce subsequent complications. However, knowledge of the dose constraints for particular structures that influence the occurrence of mastoiditis in the IMRT era is lacking to date. There is a critical need for more accurate information regarding dose limits to prevent mastoiditis in patients with NPC receiving IMRT.

Therefore, in this study, a cohort of patients with NPC who did not have mastoiditis before radiotherapy was retrospectively reviewed to evaluate dose-volume histogram (DVH) predictors for mastoiditis. We aimed to identify the incidence of mastoiditis after IMRT and determine how the radiation doses to particular structures influence the risk of mastoiditis.

This study included 146 patients with newly-diagnosed, non-distant metastatic, histologically-proven NPC who underwent the entire prescribed course of IMRT at the Sun Yat-sen University Cancer Centre (Guangzhou, People's Republic of China) between January 2009 and April 2010. This retrospective study was conducted in compliance with the institutional policy to protect the patients' private information and was approved by the institutional review board of Sun Yat-Sen University Cancer Center.

Image evaluation was performed independently by two radiologists and one clinician, each with more than 10 years' experience in head and neck cancer. If there was disagreement, consensus was reached by discussion. The diagnosis of mastoiditis was made in accordance with the criteria proposed by Platzek et al.8. The volume measurement of mastoid opacification was based on our previously reported proposals9, and mastoiditis was divided into four grades according to the criteria of Walker et al.4.

Each patient received IMRT, which covered the primary tumor to the upper neck area above the caudal edge of the cricoid cartilage. Target volumes were delineated using our institutional treatment protocol10, in accordance with the International Commission on Radiation Units and Measurements reports 50 and 62. The prescribed doses were: total dose of 68-70 Gy in 30-33 fractions at 2.13-2.27 Gy/fraction to the planning target volume (PTV) of the GTV-P (i.e. primary gross tumor volume), 60 Gy to the PTV of CTV-1 (i.e. high-risk regions), 54 Gy to the PTV of CTV-2 (i.e. low-risk regions and neck nodal regions), and 60-68 Gy to the nodal GTV in 30-33 fractions. Treatment was delivered once daily, over five fractions per week.

Contouring of the auditory apparatus and data collection

The volumes of the components of the auditory apparatus: the Eustachian tube (ET), tympanic cavity (TC), mastoid air cells, vestibular apparatus (VS), cochlea and internal auditory canal (IAC) were contoured on every slice by a radiation oncologist. Based on anatomic definitions, a reasonable contouring method for the auditory apparatus (Figure 1) was employed11. Dose-volume histograms (DVH) were generated to determine the mean dose to each component of the auditory apparatus. Additionally, one treatment-related variable (concurrent chemotherapy) and patient-related variables (age, patient sex, T classification, N classification and pathologic features) were included as clinical variables. A total of 13 variables were reviewed.

Follow-up was calculated from the first day of therapy to the day of either death or last examination. Patients were followed-up at least every three months in the first three years and every six months thereafter. Routine follow-up care included a complete head and neck examination, hematology and biochemistry profiles, chest radiography and abdominal sonography. Follow-up neck and/or nasopharynx MRI were performed every 6-12 months, especially for cases with suspected tumor recurrence or radiotherapy-induced complications.

All analyses were performed using R3.1.2. Associations between potential risk factors and the occurrence of Grade 3 mastoiditis were evaluated. Receiver operating characteristic (ROC) curves were generated to select the optimal cut-points for the mean dose to each component of the auditory apparatus in patients with and without severe mastoiditis. The area under the ROC curve (AUC) reflects the ability of the test to distinguish between individual ears with and without severe mastoiditis. The predictive value of each DVH parameter was evaluated based on the AUC. Predictors with an AUC significantly higher than 0.5 were then transformed into binary variables according to the optimal cut-off points selected and incorporated into univariate logistic regression models. Finally, a multivariate logistic regression model was used to identify predictors that have a significant impact on Grade 3 mastoiditis. The Nemenyi-test with Chi-squared approximation was applied for multiple comparisons. A P-value < 0.05 was considered statistically significant for all tests. 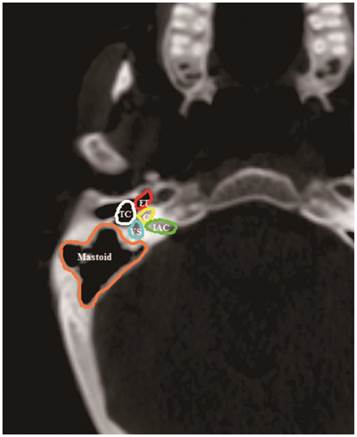 The left and right ears were evaluated separately, and patients with mastoid effusion at pre-treatment MRI were excluded. Overall, a total of 146 patients (244 ears) were enrolled in this retrospective study. The median follow-up time for this cohort of patients was 43 months (range, 31-50 months), and the final follow-up was performed on January 15, 2015. The 4-year overall survival rate was 85.6% and the local recurrence-free rate was 93.2%.

Characteristics of the 146 patients (244 ears) with NPC

*According to the 7th American Joint Committee on Cancer/International Union Against Cancer staging system.

A total of 13 parameters (see Materials and Methods) were analyzed in the current study, including both clinical variables and dosimetric parameters. ROC curve analysis was performed to select the optimal cut-off points for the dosimetric parameters for ears with or without G3M. The results of the ROC curve analysis are shown in Table 2. The optimal cut-off points for the mean dose to the mastoid, cochlea, ET, IAC, TC and VS were 35.93 Gy, 48.86 Gy, 53.43 Gy, 46.49 Gy, 41.13 Gy and 42.10 Gy, respectively. 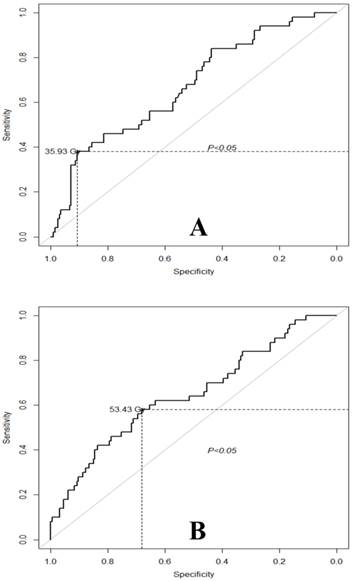 Although NPC can be treated effectively with radiotherapy, many patients complain of permanent mastoiditis after radiotherapy. Nishimura et al.3 reported the incidence of radiation-induced mastoiditis was 18%, 13% and 8% within 6, 6-12 and 12 months after 2D-CRT, respectively. Walker et al.4 showed mastoiditis persisted in 23/40 (42.5%) patients treated using three-dimensional radiotherapy (3D-CRT) (median follow-up, 23 months). In the present study, the incidence of G3M was 23% (50/244) with the overall incidence of mastoiditis reaching 36.1% (88/244), which is close to the rates reported by Walker et al., and much higher than those reported by Nishimura et al.

Two factors may explain these discrepancies, the first of which is the different diagnostic modalities utilized in each study. The major diagnostic criterion for mastoiditis in the report by Nishimura et al. was the patients' clinical symptoms. However, most cases of mastoiditis are asymptomatic or have very vague symptoms, which may lead to an omission bias and therefore an underestimation of the true incidence of mastoiditis. Considering these shortcomings of earlier works, we used T2W and T1W imaging with contrast enhancement combined with diffusion weighted imaging (DWI) to obtain a higher sensitivity and diagnostic accuracy for mastoiditis. Secondly, although IMRT provides superior escalation of dose coverage to the target, the CTV-2 inevitably includes the medial part of the ET, a critical portion of the ear associated with tubal dysfunction13. Therefore, the dose to the cartilaginous portion of the ET may be the same or even higher when using IMRT than 2D-CRT; therefore, IMRT may not decrease the incidence of radiation-induced mastoiditis.

Dose-response analyses have been scant to date. Nishimura et al.3 retrospectively reviewed 114 patients who underwent 2D-CRT for various diseases of the head and neck using fields that included the temporal bone, and suggested the dose of radiation to the region anterior or posterior to the clival line should be confined to 40-50 Gy to reduce the risk of radiation-induced mastoiditis. More recently, Walker et al.4 studied 61 patients treated with 3D-CRT for skull base tumors and suggested the mean dose to the mastoid and posterior nasopharynx should be limited to < 30 Gy. In this study, a mastoid mean dose > 35.93 Gy and ET mean dose > 53.43 Gy were significantly associated with G3M in patients with NPC treated with IMRT. The difference between our observations and previous studies may partially be explained by the use of different radiation techniques.

Although it remains unclear how different mechanisms interact to cause mastoiditis in patients with NPC after radiotherapy, this study shows the mean doses to the mastoid and ET are associated with G3M. This finding indicates that radiation-induced destruction of the ET and mastoid plays an important role in the occurrence of radiation-induced mastoiditis. It is likely that damage to the ET and surrounding structures (tensor veli palatini muscle, cartilage, nerves) leads to development of negative pressure in the mastoid, resulting in transudation of serous fluid. This fluid may impede sound conduction through the mastoid and become inoculated with bacteria from the nasopharynx. In addition, direct radiation damage to the mastoid air cell mucosa, blood vessels and lymphatics could induce a non-infectious inflammatory response14.

Clinical variables such as age, gender, pathology, T category, N category and treatment with cisplatin were evaluated in this study. Although reports on the association of these factors with mastoiditis have been lacking to date, several previous studies reported that T category and chemotherapy were associated with otitis media with effusion (OME) in NPC15-18. Hsin et al.18 showed radiation-induced OME was more likely in patients with advanced T category (T3 and T4). Our data showed that more than 60% of patients with advanced T category (T3/T4) NPC developed G3M. Both univariate (P = .045) and multivariate (P = .032) analysis indicated advanced T category increased the risk of G3M. This observation may be due to the fact that ET injuries caused directly by the primary tumor may increase the risk of radiation-induced mastoiditis in patients with NPC, as demonstrated by a pathologic study of human temporal bone showing tumor invasion of the paratubal area in patients with head and neck tumors19.

To our knowledge, this is the first single-institution study to analyze the associations between dose-volume effects and radiation-induced mastoiditis in patients with NPC treated using IMRT. Our data demonstrate patients with a mastoid mean dose > 35.93 Gy and ET mean dose > 53.43 Gy are at increased risk for mastoiditis. This study provides valuable insight into the risk factors for mastoiditis, and will help to optimize NPC treatment planning to avoid radiation-induced mastoiditis.

This work was supported by grants from the National Natural Science Foundation of China (No. 81372409), the Sun Yat-Sen University Clinical Research 5010 Program (No. 2012011), the Natural Science Foundation of Guangdong Province (No. S2013010012220) and the Science and Technology project of Guangzhou, City, China (No. 132000507). The funders had no role in study design, data collection and analysis, decision to publish, or preparation of the manuscript.