Lung cancer is the major cause of cancer-related death worldwide. Non-small-cell lung carcinoma represents 85%-90% of all lung cancer death, including adenocarcinoma, squamous cell carcinoma, and large cell carcinoma [1]. The American Cancer Society reported that estimated deaths of lung cancer account for high proportion (28% in males and 26% in females) among ten leading cancers in the United States [2]. Lipids as important membrane biological molecules are responsible for membrane structure, signal transduction, and efficient fueling [3]. Recent studies have shown that cancer cells generate fatty acids (FAs) through de novo lipogenesis to maintain a constant supply of lipids or energy requirements in the rapid growth of tumors [4, 5]. Deregulation of lipid metabolism can lead to pathophysiological processes and changes in lipid mediators [6]. Changes in the levels of membrane lipids are associated with diseases. Significantly increased monounsaturated FAs (MUFAs, i.e., C16:1 and C18:1) and monounsaturated phosphatidylcholines (MUPCs, i.e., PC 32:1, PC 34:1, and PC 36:1) are observed in the cancer microenvironment [7]. In addition, differences in lipid molecular species are found to be associated with cell morphology and cancer phenotype [8].

Recent advancements in mass spectrometry (MS) have increased its applications to analyze lipidome [9]. Liquid chromatography coupled with electrospray ionization mass spectrometer is suitable for global lipid profiling of complex biological samples based on its effective separation and identification of individual lipid species. Different lipid classes (i.e., phosphatidylcholines (PCs), sphingomyelins (SMs), phosphatidic acids (PAs), phosphatidylethanolamines(PEs), phosphatidylinositols (PIs), phosphatidylserines (PSs), triacylglycerols (TGs), and lysophosphatidylcholines (LPCs)) can be detected within a single run [10, 11]. Matrix-assisted laser desorption ionization-mass spectrometry (MALDI-MS) offers a distinct advantage for lipid analysis as it has enabled in situ direction of lipids while maintaining cell integrity [12, 13]. Lipids such as phospholipids and sphingolipids including sphingomyelin (SM) and ceramide (Cer) are efficiently detected in positive ion mode with a commonly used MALDI matrix (i.e., 2, 5-dihydroxybenzoic acid (DHB)) [14], while 1,8-bis(dimethylamino) naphthalene (DMAN) as highly basic matrix is usually employed for the detection of FAs and phospholipids in negative ion mode [15, 16], with a limited amount of time after its application under high vacuum condition. In addition, peak intensities detected using MALDI-MS are usually normalized to quantify relatively each detected species.

To investigate the associations of lipid phenotypes with six lung cancer cell lines (A549, H1650, and H1975 from adenocarcinoma, H157 and H1703 from squamous cell carcinomas, and H460 from a large cell carcinoma), MALDI-Fourier transform ion cyclotron resonance mass spectrometry (MALDI-FTICR MS) was performed to profile their membrane lipids. Two matrixes (DHB and DMAN) were used to coat on the cell samples, respectively, and the detected membrane lipids including PEs, PIs, SPLs, PCs, PAs, and FAs have significantly different distributions among six lung cancer cell lines.

The cell-coated glass slides were washed with phosphate buffer saline three times and then were air-dried at room temperature. Matrix deposition was performed as previously described [7]. Briefly, approximately 4 mg of DHB or 8 mg of DMAN was coated homogeneously on the surface of each cell-coated slide using a sublimation device and then for mass spectrometric analysis in positive or negative ion mode. Matrix-coated slides were placed at -20 °C for 30 min for matrix re-crystallization in a Petri dish (100 mm diameter × 15 mm depth), followed by parallelly placing the cold slide and a piece of filter paper wetted totally with methanol/water (1:1, v/v) at the bottom of the Petri dish for approximately 3 min at room temperature to re-crystallize the deposited matrix.

Raw MS data were processed with DataAnalysis 4.0 (Bruker Daltonics). Peaks with signal-to-noise ratio of > 5, relative intensity of > 0.1%, and absolute intensity of > 10,000 were selected as reliable variables. After isotopic deconvolution, monoisotopic peaks among different samples were aligned within a narrow mass tolerance window (±0.001 Da) as a single variable, and their individual intensities were obtained. The resulting data were subsequently exported to Microsoft Excel and the peaks from [M+H]+, [M+Na]+, and [M+K]+ ions in the positive ion mode were further combined as one variable. Peaks detected less than two-thirds of six lung cancer cell lines were excluded. The half of the baseline intensity in each spectrum was adopted as their intensities of missing peaks. The intensities of lipids (or variables) from each mass spectrum were normalized to a constant number of 1000. Resulting datasets in the positive and negative ion modes from each cancer cell line were combined into one dataset before statistical analyses.

Partial least-square discriminant analysis (PLS-DA) was performed to evaluate differences among six lung cancer cell lines. On the basis of variables (or lipids) with variable importance in the projection (VIP) values of > 1.0 in the PLS-DA model, lipids responsible for distinguishing between different cell lines were obtained. Then univariate analysis was performed to validate statistical significance in the above-mentioned lipids using non-parametric Wilcoxon-Mann-Whitney test. Moreover, based on the detected lipids with different saturation, correlation and cluster analysis were used to analyze the correlation between saturated and unsaturated lipids among six cancer cell lines. Statistical analyses were performed using SAS software (version 9.2, SAS Institute Inc., Cary, NC) and SPSS software (version 12.0, SPSS Inc., Chicago, IL). A p value < 0.05 was considered to be statistically significant.

Structural identification of lipids of interest

The lipids of interest were identified as previously described [7, 17]. Briefly, significantly different lipids were searched against the Lipid maps (http://www.lipidmaps.org/) or the METLIN database (http://metlin.scripps.edu/), with a mass tolerance of < 2 ppm and the relative intensity error of isotopic peaks < 5%. The collision-induced dissociation was selected to obtain tandem mass spectra of the lipids of interest.

Membrane lipids are central to the regulation and control of cellular function and disease. Different lipid composition in cell membranes can affect cell behaviour such as phagocytosis and signaling cascades [18]. Due to the diversity and complexity of lipids, lipid analysis usually contains many steps including lipid extraction, MS-based analysis, and data processing using bioinformatics tools [9]. In this study, we have employed a rapid and relatively simple procedure to directly analyze intact cell samples avoiding extraction and/or separation of lipids. Representative mass spectra of two cell-coated slides from H1703 cancer cell line were acquired in the positive (Figure 1A) and negative ion modes (Figure 1B), respectively. Compared with Raman micro-spectroscopy and nuclear magnetic resonance spectroscopy which can only analyze and diagnose a group of lipids [19-21], MALDI-FTICR MS could in situ detect simultaneously many lipid species. After ion combination and intensity normalization, a total of 230 variables (146 in the positive ion mode and 84 in the negative ion mode) were selected for further statistical analyses. 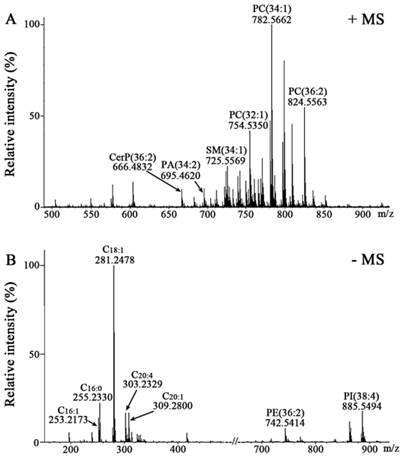 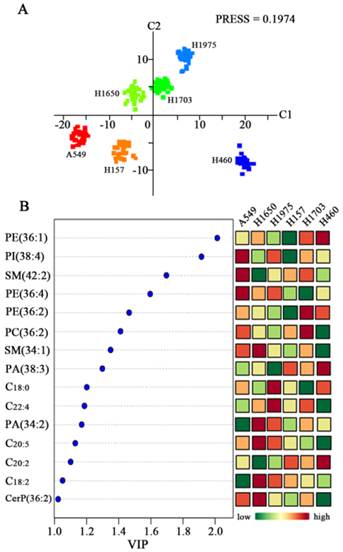 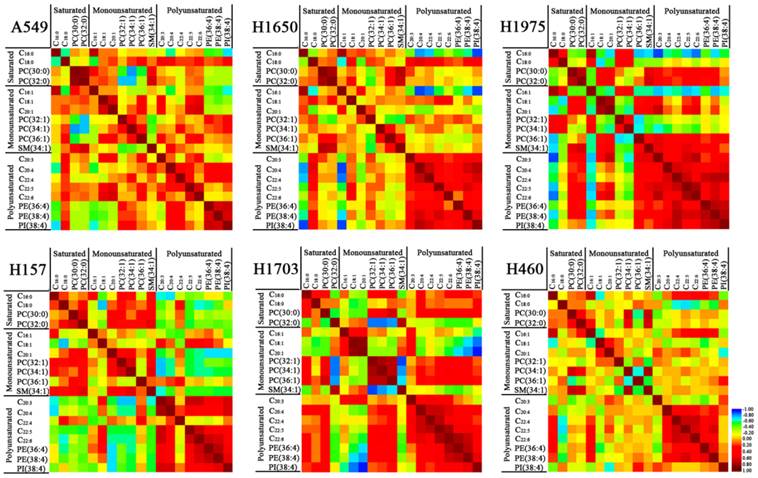 In addition, it should be noted that the shortage in this study is that a comparison of normal lung cell and six NSCLC cell lines was not performed due to the poor-cultivation status of normal lung cancer cell (BEAS-2B cell line). 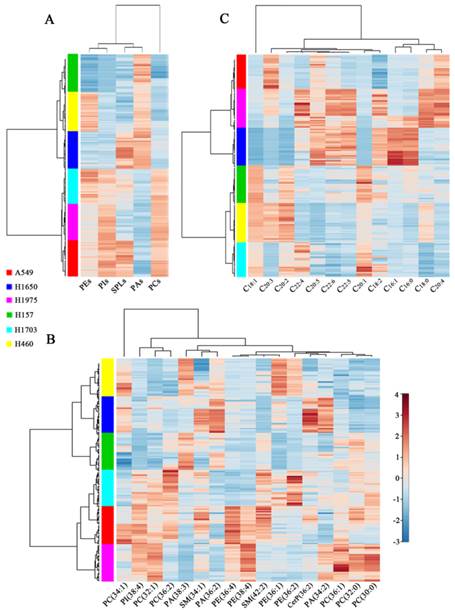 This study has demonstrated that MALDI-MS combined with multivariate statistical analysis is able to detect cell type-specific membrane lipids. Alterations in the levels of the detected membrane lipids including PEs, PIs, SPLs, PCs, PAs, and FAs can help to differentiate and classify lung cancer cells, which may be associated with lung cancer cell phenotypes.

This study was supported by the National Natural Science Foundation of China (Grant no. 91542101) to Z. Li.

None of the authors have conflict of interest to declare.