Several previous studies have demonstrated that CDK5 or p27 expression in gastric cancer are associated with overall survival. We have previously reported that tumor suppressive function of CDK5 is related to p27. The aim of this study was to investigate correlation between the clinicopathological parameters and overall survival with different CDK5/p27 expression statuses in 244 gastric cancer patients using immunohistochemistry. Low CDK5 expression was detected in 93 cases (38.11%) and low p27 in 157 cases (64.34%). The expression of CDK5 was significantly related to sex (P = 0.034) and Lauren's classification (P = 0.013). The expression of p27 was significantly related to sex (P = 0.012), differentiation (P = 0.003), TNM stage (P = 0.013) and lymph node metastasis (P = 0.001). Based on the combined expression of CDK5 and p27, we classified the patients into four subtypes: CDK5 Low/p27 Low (n = 69), CDK5 High/p27 Low (n = 88), CDK5 Low/p27 High (n = 24) and CDK5 High/p27 High (n = 63). The CDK5 Low/p27 Low expression was closely related to female (P = 0.026), diffuse type (P = 0.027) and lymph node metastasis (P = 0.010). The CDK5 Low/p27 Low patients displayed poorer survival in comparison with the rest of the patients in Kaplan-Meier analysis. No significant overall survival difference was observed among the patients with CDK5 High and/or p27 High expression. In the multivariate analysis, CDK5 and p27 co-expression status was identified as an independent prognostic factor for patients with gastric cancer.

Gastric cancer (GC) is the second leading cause of cancer death, with East Asia accounting for more than half of the annual cases[1]. Although the incidence of gastric cancer has been declining mainly due to the increased availability of fresh fruit and vegetable and the decreased reliance on salted and preserved food[1], in 2011 there were still about 420,000 new cases diagnosed (70% are men and 30% are women) and around 300,000 death due to this disease in China[2, 3]. Therefore, it is of great importance to find new molecular markers that will help evaluate the prognosis or develop novel therapies for gastric cancer.

Cyclin-dependent kinase 5(CDK5) is aproline-directed serine/threonine kinase discovered and reported by Hellmich in 1992[4]. CDK5 has strong homology with the mammalian Cdk2 and yeast cdc2 and is an unusual molecule in the Cyclin-dependent kinases (Cdks) protein family[4]. Unlike the other Cdks, CDK5 has no known cell cycle or mitotic function and is not activated by cyclins[5]. Instead, CDK5 is activated via association with either of the two obligate CDK5-specific activator proteins, p35 or p39[6, 7]. Previous studies indicated that CDK5 participates in a variety of pathological and physiological functions including neuronal migration during brain development, synaptic activities in mature neurons and neuronal cell survival and death[8-10]. In neurons, the function of CDK5 as a cell cycle suppressor is independent of its kinase activity, but its nuclear localization via association with p27 (also known as KIP1)[11] and p35-mediated full assemble of the E2F1-CDK5 complex are needed[12, 13]. Recently, CDK5's functions beyond the nervous system are emerging and increasing evidence suggested a function of CDK5 in cancer tumorigenesis and progression. For example, CDK5 has been implicated in the regulation of the motility and migration of prostate cancer cell lines[14], and modulation of the proliferation of medullary thyroid carcinoma and hepatocellular carcinoma cells[15, 16]. Furthermore, elevated CDK5 activity has been detected in pancreatic and lung cancers[17, 18].

The CDK5 interacting protein p27 is a cyclin-dependent kinase inhibitor and has a central role in cell cycle regulation[19]. By getting incorporated into the CDK4/6-Cyclin D complex or the CDK2-Cyclin E/A complex, p27 restrains the G1 phase initiation and G1/S transition[20, 21]. As a critical regulator of cell cycle progression, p27 has been considered to be a tumor-suppressor gene in the conventional view[22, 23]. In studies on gastric cancers, it has been reported that p27 decreased significantly in relation to tumor progression[24]. Some studies have shown that low levels or loss of p27 expression is a significant predictor of reduced survival and tumor progression in ovary[25], breast[26],colon[27], lung[28]and liver cancers[29], However, in GC controversial roles of p27 have been reported and further research is needed to elucidate its function[30-32].

In our previous work, we have demonstrated that in GC CDK5 down regulation was an independent prognostic factor and the nuclear localization of CDK5 was critical for its tumor suppressor function[33]. Given that CDK5 nuclear localization depends on p27 in neurons, we hypothesized the functional correlation between CDK5 and p27 may affect each other's prognostic power. In the present study, we examined the expression of CDK5 and p27 in 244 gastric tumor tissues obtained from patients with resected gastric cancer and analyzed their correlation with patient clinicopathologcial features.

The study cohort was composed of samples from 244 patients with gastric adenocarcinoma, including 180 men and 64 women (mean age, 59.4 years), who had undergone gastrectomy at the Department of Gastric Surgery, Fujian Medical University Union Hospital, between January 2009 and December 2009. Following surgery, routine chemotherapy was given to patients with advanced disease; no radiation treatment was administered to any of the patients. Eligibility criteria for this study included the following: (1) histologically proven adenocarcinoma, (2) not with other gastric tumors such as gastric stromal tumor, (3) no history of gastrectomy or other malignancy, (4) not received the neoadjuvant chemotherapy (5) availability of complete clinicopathological and survival data. The study was performed with the approval of the ethics committee of Fujian medical union Hospital. Written consent was given by the patients for their information and specimens to be stored in the hospital database and used for research.

The clinical and pathological data were recorded prospectively for the retrospective analysis. The clinicopathological data for the 244 gastric cancer patients included age, sex, size of primary tumor, location of primary tumor, degree of differentiation, histological type, Lauren's classification, Borrmann type, depth of invasion, lymph node metastasis, TNM stage, vessel invasion and distant metastasis. The pathologic stage of the tumor was re-assessed according to the 2010 International Union Against Cancer (UICC) on gastric cancer TNM classification (seventh edition)[34]. Overall survival was defined as the time from curative surgery to death or the last clinical follow-up. After surgery, all patients were followed every 3 months in the first 2 years, every 6 months in the next 3 years and every year afterwards or until death. The deadline for follow-up was October 2015. All patients had follow-up records for more than 5 years.

Paraffin blocks that contained sufficient formalin-fixed tumor specimens were serial sectioned at 4μm and mounted on silane-coated slides for immunohistochemistry analysis. The sections were deparaffinized with dimethylbenzene and rehydrated through 100, 100, 95, 85, and 75 % ethanol. Antigen retrieval treatment was done in 0.01 mol/L sodium citrate buffer (autoclaved at 121°C for 2 mins, pH 6.0) and endogenous peroxidase was blocked by incubation in 3% H2O2 for 10 mins at room temperature. The sections were then washed in PBS and blocked with 10 % goat serum (ZhongShan Biotechnology, China) for 30 mins and incubated with rabbit anti-human CDK5 (sc-173, 1:150 dilution, Santa Cruz Biotechnology, polyclonal) or p27 (ab32034, 1:250 dilution, Abcam, monoclonal) antibody in a humidified chamber at 4°C overnight. Following three additional washes in PBS, the sections were incubated with HRP-conjugated secondary antibody for 30 mins at room temperature. The visualization signal was developed with diaminobenzidine (DAB) solution and all slides were counterstained with 20 % hematoxylin. Finally all slides were dehydrated and mounted on cover slips. For negative controls, the primary antibody diluent was used to replace primary antibody.

The IBM SPSS (SPSS, Chicago, IL) was used for all statistical analyses. The χ2 test (or the Fisher exact test) was used to analyze categorical data. Univariate survival analysis was performed using the Kaplan-Meier method, and the significance of difference between groups was analyzed using the log-rank test. The Cox proportional hazards regression model was used for multivariate survival analysis, with adjustments for variables that might be significant prognostic factors according to the univariate analysis. All P values were 2-sided and statistical significance was determined at P < 0.05.

Expression Status of CDK5 and p27 in Gastric Cancer

Correlation between CDK5 and p27 Expression and Clinicopathological Variables 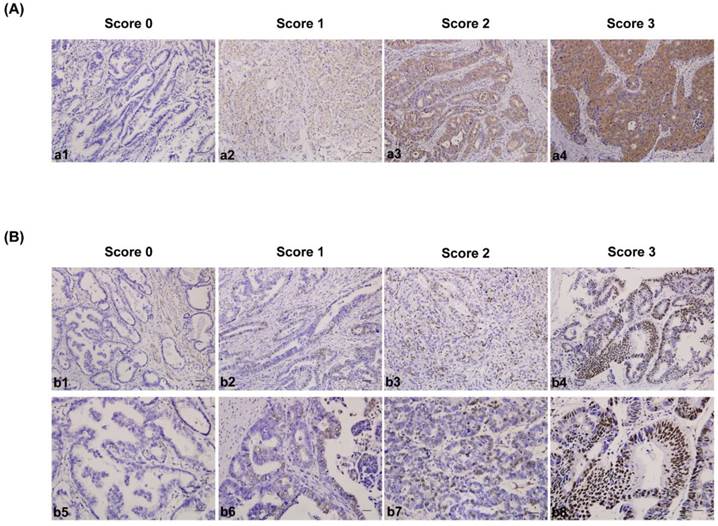 Last, the clinicopathological parameters that were correlated with the patient survival in the univariate analysis were included in the multivariate analysis. The tumor size, vessel invasion, distant metastasis, TNM stage, depth of invasion, distant metastasis and CDK5 and p27 co-expression status were independent prognostic factors for patients with gastric cancer, whereas lymph node metastasis, tumor location, Borrmonn type and p27 expression were not (Table 3).

Increasing evidence demonstrated uncontrolled gastric cancer cell growth is due to disruption of the G1/S and G2/M checkpoints, which involved a series of positive and negative cell-cycle regulators[36, 37]. Zhang et al. found that CDK5 could function as a cell cycle suppressor when it localized in the nucleus in neurons[12]. However, CDK5 has no intrinsic nuclear localization signal. Its nuclear localization relies on its binding to p27 in neurons[11]. We previously discovered that nuclear CDK5 suppressed GC cell proliferation and xenograft growth independent of its kinase activity, but dependent on its association with p27[33]. As a cyclin-dependent kinase inhibitor, p27 could negatively modulate cell cycle progression through inhibition of the G2/M phase[38] and its prognostic value in GC had been reported[39, 40]. But no studies have examined the prognostic roles of the combination of CDK5 and p27 in GC. In this study, we discovered that CDK5 or p27 expression were associated with patient survival, which is consistent with our previous study and other reports. When CDK5 and p27 expression are combined, not surprisingly, the CDK5 Low/p27 Low patient group displayed a shorter overall survival than other patients (Fig 3A). However, no significant overall survival difference was observed among the patients with CDK5 High and /or p27 High expression (Fig. 3B). Further analysis revealed that in patients with high CDK5 expression, the expression of p27 was no longer associated with overall survival (Log Rank test, P = 0.139). Similarly, in patients with high p27 expression, the expression of CDK5 was not associated with overall survival either (Log Rank test, P = 0.475). Taken together, our data suggested that the tumor suppressive functions of CDK5 and p27 were closely related. The high expression of one may compensate for the loss or down regulation of another. Thus the co-expression profile of CDK5 and p27 as a prognostic marker will probably provide more accurate prediction in clinical practice.

Kaplan-Meier analysis of the correlation between the expression of (A) CDK5 and (B) p27 and the overall survival of gastric cancer patients.

In summary, co-expression of CDK5 and p27 is an independent prognostic factor for overall survival in patients with gastric cancer. Immunohistochemical analysis of CDK5 and p27 protein expression on preoperative biopsies and cancer tissues after surgery may aid in stratifying patient treatment algorithms and predicting GC patient outcome.

The authors have disclosed that they have no significant relationships with, or financial interest in, any commercial companies pertaining to this article.

29. Chetty R. p27 Protein and cancers of the gastrointestinal tract and liver: an overview. Journal of clinical gastroenterology. 2003;37:23-7