The incidence rate of cancer and other chronic diseases have been associated with the lack of eating healthy foods, such as fruits and vegetables, and the consumption of western diets rich in processed foods and meat. Several scientific and epidemiological studies have shown strong associations between colon cancer and dietary factors. Colorectal cancer was the third most common cancer with nearly 1.4 million new cases in 2012 [1]. Though the colon cancer rate for Americans aged 50 and older is dropping due to effective screening, colon and rectal cancer rates are rising in younger Americans [2]. A recent study predicts that by 2030, the 20-34 age group will see colon cancer rates increase by 90% and rectal cancer rates increase by 124% [2]. Only 5 to 10% of colon cancers are due to genetic predisposition; others are due to diet and lifestyle habits [3]. Therefore changing diet and lifestyle habits has great potential to reduce incidence of colorectal cancer.

The best approach for phytochemical use is to understand the mechanism of action of plant-derived compounds and use these compounds in combination with each other or current therapeutic agents so that low dosage treatment exerts maximum treatment benefits. Using this strategy, we have identified that curcumin, the major component of turmeric, when used in combination with silymarin, the bioactive component of milk thistle, elicits a maximum effect on inhibition of colon cancer cell proliferation. Results of clinical trials show that curcumin is non-toxic and well-tolerated (in 12 g dosages) [5]. Silymarin is used for liver health in traditional medicine [6]. Both silymarin and curcumin have shown inhibitory effects against several types of cancer [6-8]. In colorectal cancer cells, silymarin exhibits anti-proliferative effect only at high concentrations [9]. We investigated the in vitro effect of curcumin and silymarin alone and in combination on human colorectal cancer cell lines (DLD-1, LoVo, HCT116). Our results show that a curcumin + silymarin combination leads to more cell death by apoptosis than a single compound treatment alone. Also, curcumin sensitizes the anti-proliferative effect of silymarin.

DLD-1 cells were propagated (37°C, 5% CO2) until confluence was reached. Cells were treated with trypsin (0.25%) to detach them from culture plates followed by addition of enriched DMEM to neutralize trypsin. Cells (5000 cells/100 µl) were added to each well of 96-well microplates and incubated overnight to allow cells to attach. Cells were treated with curcumin alone, silymarin alone or curcumin + silymarin combination (12.5 µM curcumin held constant: silymarin at concentrations of 1.56, 3.125, 6.25, 12.5, 25, 50, 100 µM). Cell proliferation was assessed using a previously described crystal violet method [10, 11]. Briefly, all dilutions were made immediately before addition to cells, all treatments were performed in quadruplicate, and each experiment was performed at least three times independently. In addition to treatment wells, control wells were assessed which included cell blanks (media only), growth controls (untreated cells plus media), and vehicle controls (untreated cells plus media plus DMSO at the highest concentration assessed). At 48 h, cells were fixed by addition of glutaraldehyde (20 μL, 11% glutaraldehyde, 15 min rotation, 300 rpm), washed with water, dried and stained (0.1% crystal violet). Crystal violet that was not cell-bound was removed by washing (3 water washes) and then plates were dried. Cell-bound crystal violet was solubilized (10% acetic acid) and absorbance was determined in a microplate reader (562 nm).

DLD-1 cells were seeded in a 96-well plate at a density of 5000 cells/well. The next day media were replaced and treatments added: DMSO (vehicle control), curcumin (12.5 µM), silymarin (12.5 µM) or combination of curcumin (12.5 µM) and silymarin (12.5 µM). Plates were incubated (37oC, 5% CO2, 48 h). Cell viability and apoptosis were measured using the ApoTox-Glo™ Triplex Assay (Promega, Madison, WI) that quantitated activity of caspases-3/7. The basis of the assay was that a fluorogenic cell-permeable peptide gets cleaved by a protease upon entry into living cells and cleaved peptides generated a fluorescent signal proportional to number of live cells. Fluorescence intensity was measured at the wavelengths 405EX/505EM. The next step was addition of Caspase-Glo 3/7 reagent (luminogenic substrate with tetrapeptide sequence DEVD attached) to microwells and incubation (room temperature). Caspase digestion of the peptide released a luciferase substrate and resulted in luciferase action (production of the luminescent signal). Fluorescence and luminescence were measured with a Synergy® instrumentation (Biotek, Winooski, VT).

Data were reported as mean ± SEM. Comparisons of the compounds were performed utilizing ANOVA followed by post hoc Bonferroni pairwise comparisons. Significance was reported at p<0.05 unless otherwise stated.

Combination index (CI) analysis was used to determine whether the effect was synergistic, additive or antagonistic using the CompuSyn system. Percent cell survival from DLD-1 data (Figure 1A) was converted to growth inhibition, termed Fraction Affected (FA), and plotted against the CI (Figure 1D). With the single exception of combination treatment with curcumin (12.5 µM) and silymarin (1.56 µM), all combination ratios exhibited CI<1 which indicated a synergistic interaction between the two compounds [13]. 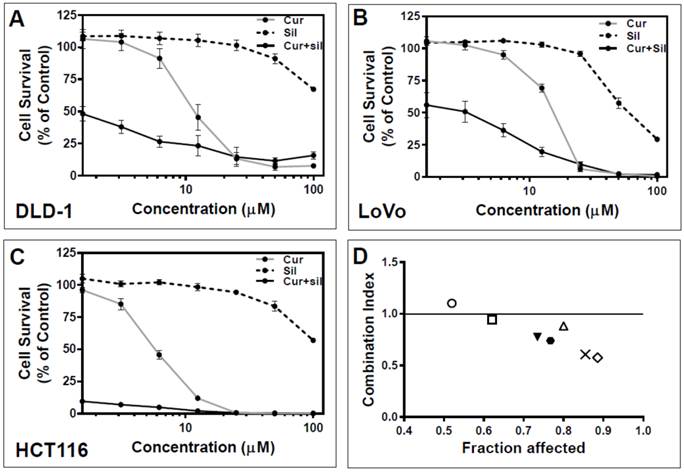 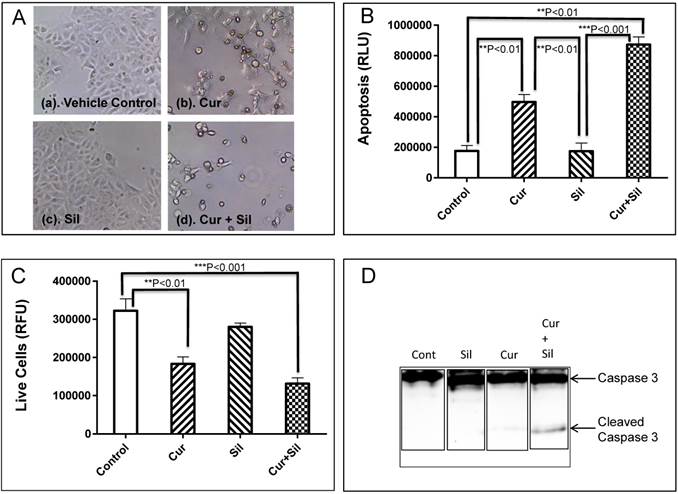 To verify that active (cleaved) caspase 3 levels were indeed increased in the curcumin alone and curcumin + silymarin combination compared to silymarin alone and vehicle results, Western blot was performed (Figure 2D). Bands of uncleaved caspase 3 were evident in each lane of the blot; however, cleaved caspase 3 bands were evident only in curcumin alone (faint band) and combination (more intense band) lanes and absent in control and silymarin lanes (Figure 2D). Therefore, results suggested that combination treatment of cells exhibited increased apoptosis.

Sensitization Effect of Curcumin on Silymarin

The combination of both compounds showed a significant increase in apoptosis as analyzed by caspase3/7 activity assay (Figure 2B). Also, the increased cleaved caspase 3 protein was observed in Western blot only in combination treated cells (Figure 2D). To understand the synergistic interaction of both compounds, we performed pre-exposure experiments. The DLD-1 cells were pre-exposed to curcumin (3.125, 6.25, 12.5 µM. 24 h). At the 24 h time point, curcumin was removed by washes and then the cells were treated with silymarin (3.125 µM). Percent cell survival was calculated compared to control. Results of no pre-exposure compared to curcumin pre-exposed, silymarin (3.125 µM)-treated cells caused a statistically significant pre-exposure dose-dependent decrease in cell survival compared to no pre-exposed cell control (Figure 3B). When comparing these curcumin pre-exposure results with silymarin pre-exposure results obtained in the converse experiment, no significant difference was observed between the no pre-exposure control and the silymarin pre-exposed, curcumin-treated cells (Figure 3A). Therefore, the data strongly suggests that curcumin sensitizes DLD-1 cells for silymarin-induced inhibitory effect thereby leading to an augmented effect on inhibition of cell proliferation. When cells were simultaneously exposed to both compounds, the curcumin-sensitizing effect augmented silymarin effect thereby providing evidence for the synergistic interaction.

Both curcumin, the curcuminoid present in turmeric, and silymarin from milk thistle [6] have reported anticancer properties in vitro and in vivo [5, 7, 8]. Several studies demonstrated that curcumin inhibited proliferation and induced apoptosis in several types of cancer [14-16]. Curcumin has also been credited with mediating radiosensitization and chemosensitization in cancer cells [17, 18]. Curcumin, when combined with different phytochemicals, exhibited antiproliferative and cytotoxic effects against cancer in a synergistic manner [19-21]. For example, curcumin displayed synergistic anticancer activity when combined with epigallocatechenin-3-gallate in human breast cancer [22], phenyl isothiocyanate in human prostate cancer cells [23, 24] and carnosic acid in human acute myeloid leukemia [20]. In the present study, we found that curcumin exhibited anticancer activity when combined with silymarin in a synergistic manner in the DLD-1 colon cancer cell line.

Phytochemicals showing synergistic activity may be more advantageous than traditional chemotherapy. Even though chemotherapy eliminates tumor cells, it leads to several side effects. In addition, both chemo- and radio-therapy have been shown to cause epithelial-mesenchymal transition (EMT) that subsequently resulted in metastasis of the tumor [25, 26]. Phytochemicals offer alternate therapeutic approaches to cancer treatments and avoid toxic states and side effects manifested by chemotherapeutic agents.

AM, TAA and KS were supported by the DeNardo Education and Research Foundation grant. Financial support for UE was provided by the President Research Fund from Saint Louis University. The authors wish to thank Dr. Patrick Kelly for his critical reading of the manuscript.

24. Cheung KL, Khor TO, Kong AN. Synergistic effect of combination of phenethyl isothiocyanate and sulforaphane or curcumin and sulforaphane in the inhibition of inflammation. Pharmaceutical research. 2009;26:224-31

29. Li L, Aggarwal BB, Shishodia S, Abbruzzese J, Kurzrock R. Nuclear factor-kappaB and IkappaB kinase are constitutively active in human pancreatic cells, and their down-regulation by curcumin (diferuloylmethane) is associated with the suppression of proliferation and the induction of apoptosis. Cancer. 2004;101:2351-62