Association between the OGG1 Ser326Cys Polymorphism and Cancer Risk: Evidence from 152 Case-Control Studies

Although it has been suggested that the 8-oxoguanine DNA glycosylase (OGG1) gene Ser326Cys polymorphism may be a risk factor for cancer, the conclusions from previous studies are inconsistent. Thus, we conducted an updated meta-analysis to estimate the effect of OGG1 variant genotypes on cancer susceptibility. We searched the PubMed for all eligible studies published in English for the period ending September 2014. We found the association between OGG1 Ser326Cys polymorphism and cancer susceptibility based on 152 case-control studies in different genetic model comparisons (dominant model: OR = 1.053, P = 0.018; recessive model: OR = 1.108, P < 0.001; homozygote: OR = 1.135, P < 0.001; additive model: OR = 1.059, P < 0.001). However, the results from the subgroup analyses based on types of cancer, health population as controls or studies with relatively large sample size did not support the conclusion. Although the overall results of this meta-analysis showed a positive association between OGG1 variant genotypes and cancer susceptibility, the subgroup analyses by cancer type, sample size, and source of controls presented inconsistent results. Therefore, the current evidence from the meta-analysis did not support the hypothesis of OGG1 Ser326Cys polymorphism as a risk factor of cancer.

DNA damage can be induced by many factors, including mismatches during amplification, ultraviolet radiation, and chemical mutagens. Although endogenous DNA repair systems can repair the damages within a certain extent, the repair capability may be undermined by genetic variation in these systems. Even worse, the accumulation of errors can overwhelm the cell, resulting in permanent mutations in the gene and ultimately in the development of malignant tumors.[1] The 8-oxoguanine DNA glycosylase 1 (OGG1) gene, located on chromosome 3p26, plays a critical role in the base excision repair (BER) pathway.[2] The OGG1 promotes the hydroxylation of the glycosylic bond between the abnormal base and the sugar moiety, removing 8-oxoguanine from the oxidative lesion DNA, leaving a notch in the DNA strand, a so-called apurinic/apyrimidinic site, which could be subsequently filled by a normal base.[3, 4] The most studied OGG1 gene polymorphism located in exon 7 of this gene (rs1052133), an amino acid substitution from serine to cysteine at codon 326, has been proposed to modify OGG1 function and increase cancer susceptibility.[5, 6]

To date, though many studies have assessed the association between the OGG1 Ser326Cys polymorphism and cancer risk, there are still many inconsistencies among the findings from these studies. For this reason, we conducted a meta-analysis with 152 case-control studies to evaluate the linkage between this polymorphism and susceptibility for different types of cancer.[7-93]

Flowchart of selection of studies for inclusion in meta-analysis. 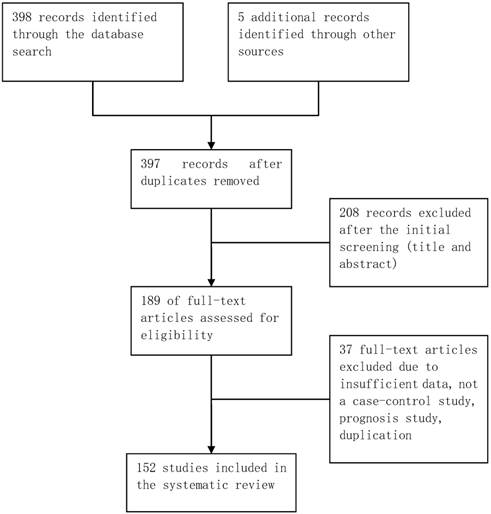 As displayed in Table 1, in the subset analysis by cancer type, we found that the association between OGG1 SerCys or CysCys polymorphism and cancer risk was not significantly different except for leukemia in the recessive model and additive model (P = 0.043 and P = 0.032, respectively). In the subset analysis stratified by ethnicity, the OGG1 variant genotypes were significantly associated with cancer susceptibility in Caucasian and Asian populations with the exception of Asian populations in the dominant model (OR = 1.060, 95%CI: 0.996~1.129, P = 0.068). In the subset analysis stratified by source of control, the association between OGG1 variant genotypes and cancer risk showed a statistical significance among studies with controls from hospitals in each genetic model comparison but not for controls from the population. In the subset analysis according to sample size, there was an obvious correlation between the OGG1 variant genotypes and cancer risk among studies with a sample size of less than 500 participants in each genetic model (P<0.05), but not for studies with a sample size larger than 500 participants in the dominant and additive models (P = 0.270 and P = 0.064, respectively). In addition, the subset analysis according to HWE revealed a statistically significant association between variant genotypes and cancer risk among studies in agreement with HWE, but not among studies not in agreement with HWE.

Stratification analyses of the hOGG1 Ser326Cys polymorphism with regard to cancer susceptibility.

In the sensitivity analysis, the effect of each dataset on the merged OR value was detected by repeating the meta-analysis by the leave-one-out method. In subset analyses according to cancer types, ethnicity, source of control, and sample size, we found that the overall result remained stable for each subgroup after completing sensitivity analysis (data not shown).

The OGG1 gene encodes a repair enzyme for oxidative DNA damage.[2] Because of the critical role of OGG1 in base excision repair, the mutation in the OGG1 gene is considered to modify the susceptibility to cancer. In this meta-analysis, we obtained overall results similar to Wang et al. and Wei et al., respectively[94, 95] that the OGG1 variant genotypes might be a risk factor for developing malignant neoplasms.164, 165 However, the subgroup analyses according to cancer types, sample size, and source of controls did not support this conclusion. 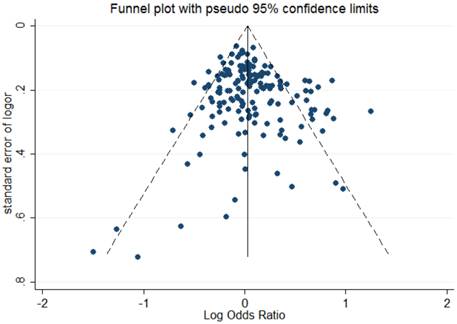 In the subset analysis according to cancer types, there was no obvious correlation between variant genotypes and cancer risk except for leukemia. The positive association between Ser326Cys polymorphism and leukemia might be a result of the relatively small sample size of leukemia studies and should be verified by future studies.

When stratified by the source of controls, significant cancer susceptibility was found among studies using the hospital patients as controls but not for studies using healthy populations as controls. Moreover, in the subset analysis according to sample size, a significant association was found only among studies with a sample size less than 500 participants and not among studies with more than 500 participants. The results suggest that the correlation between OGG1 variant genotypes and cancer susceptibility might be weaker than we expected. Therefore, more large-scale studies with appropriate control subjects and strict methodologies are needed to assess genetic variants and cancer risk.

There are several limitations of our meta-analysis that need to be stated. First, only studies published in the PubMed database and written in English were included in the meta-analysis. Second, inadequate data regarding the gene-environment and gene-gene interactions in included studies prevented us from understanding in depth the magnitude of the effect of the variant gene on cancer susceptibility. Third, the significant publication bias due to non-publication of negative results and variability in small sample size studies in our meta-analysis might have led to false conclusions.

In general, the overall results of this meta-analysis showed a positive association between OGG1 variant genotypes and cancer susceptibility. However, it is more likely a false conclusion because most subgroup analyses by cancer type failed to support it. Furthermore, studies with different sample sizes or sources of controls with inconsistent results further weakened the reliability of these conclusions. In the future, additional well-designed and large-scale studies with representative controls are required to assess the relationship between OGG1 Ser326Cys polymorphism and cancer risk in single ethnicity populations, and information about gene-gene and gene-environment interactions is also necessary.

We retrieved relevant articles from the PubMed database with the following search terms: '8-oxoguanine DNA glycosylase / hOGG1 / OGG1 / OGG / Ser326Cys,' 'SNP / polymorphism' and 'carcinoma / cancer' (the latest retrieval was updated on September 20, 2014). We also examined the references of all included articles and previously published meta-analysis for potentially relevant articles. In order to avoid republication or overlapping data, only recently published studies with larger number of subjects were selected for our meta-analysis.[96, 97] Studies conforming to the following criteria were included: (1) has a case-control design or nested case-control design; (2) provides an evaluation of the linkage between the OGG1 Ser326Cys polymorphism and cancer risk; (3) provides available genotype frequency; and (4) was published in English.

Data were extracted by using a pre-designed data extraction form including first author, year of publication, research design, country, ethnicity, genotyping method, and genotype frequency. We categorized subjects as Asians, Caucasians, and Africans according to their ethnic descent. If a group of subjects comprised two or more than two ethnic descents, the group was termed ''mixed ethnicity''. Furthermore, if a study including subjects of different types of cancer or different ethnic groups, we treated each subgroup as an individual dataset (a total of 162 datasets from 152 articles). We evaluated the quality of included articles using the Newcastle-Ottawa quality assessment scale (NOS).[98] The data quality was quantitatively assessed based on a 'star system' that ranged from 0 to 9, including three aspects: the selection, comparability, and outcome of interest. Articles with 7 points or above were considered as high quality. Two investigators independently (L.Q. and Y.L.) extracted the data and evaluated the quality of studies. Disagreements between them were resolved by discussions with other authors.

We assessed the effect of OGG1 Ser326Cys polymorphism on cancer susceptibility using odds ratios (ORs) with 95% confidence intervals (CIs), with the following genetic models: dominant model, recessive model, homozygote comparison model, and additive model. Subset analysis was also carried out based on cancer types, ethnicity, and source of controls, sample size, and the Hardy-Weinberg equilibrium (HWE). Heterogeneity among the studies was determined by a Q test based on a chi-square test (P < 0.10 was regarded as a significant difference).[99, 100] Considering the clinical heterogeneity among included studies, a random effect model using the DerSimonian and Laird method was used to merge the datasets.[101] Sensitivity analysis was performed to evaluate the reliability of the results. Funnel plots and Egger's test were adopted to detect potential publication bias. The statistical analysis was completed by using STATA 13.0 (Stata Corp, College Station, TX.). The scheme of the meta-analysis was in accordance with the Preferred Reporting Items for Systematic Reviews and Meta-analysis (PRISMA) statement [102].

We thank Meng-xia Li for his free assistance of language editing. We also thank Shi-Heng Zhang to provide professional opinions about OGG1 gene. We are especially grateful for strongly supporting to this study from Dong Wang. This study was supported by Grants from the National Natural Science Foundation of China (No. 30872975, 81401412).

D.W. X.W. H.Z. and L.Q. conceived and designed this study. L.Q. and X.W. were responsible for searching the articles in database. Q.L. X.W. and Z.H. were jointly involving in extracting data and writing the manuscript.