RNA interference (RNAi) has become a popular approach recently, RNAi technology is applied for posttranscriptional gene silencing which triggered by small interfering RNA (siRNA) [1-3]. RNAi therapies have rapidly been advanced in clinical trials for the treatment of various human diseases, especially various human cancers [4-6], and the strategy of multiple gene-targeted siRNAs is considered to be a good way for controlling complex disease systems [7,8], such as hepatocellular carcinoma (HCC) [9].

HCC is the sixth most common malignancy tumor in the world and HCC has several complex and genetic alterations [10]. But the mechanisms of initiation and progression of HCC have not been made clear completely. Even though there are potential curative treatments, HCC can also easily become a poor prognosis tumor with the characteristics of high recurrence rate and rapid progress [11]. Therefore, development and identification of novel effective agents, such as siRNAs, that are able to suppress HCC effectively is imperative.

NET-1 gene is a member of the transmembrane 4 superfamily (TM4SF) [12], it is a tumor-related gene and found to be high expressed in many human tumor tissues [13-17]. NET-1 overexpression was also strong-related to pathological grading and clinical stages in HCC [18]. EMS1 is a cytoskeleton reorganization related gene, its coding protein is cortical actin-binding protein (cortactin) with binding ability to F-actin [19]. Studies found that cortactin could bind to Arp2/3, and influence cell motility, it also was considered has a relationship with cell migration [18]. Cortactin is a substrate of oncogene src, so its functions in tumors are studied deeply, and EMS1 was found high expressed in hepatocarcinoma, breast cancer and head and neck cancer, it had relationship with cancer invasion and transfer [20-23]. Vascular endothelial growth factor (VEGF) is a well-known gene in cancer therapy researches, angiogenesis inhibition is considered as an effective way for tumor treatment, thus VEGF is a good target for cancer therapy [24-26].

In the study, we intended to evaluate the effects of multiple targeting of NET-1, EMS1 and VEGF genes on biological behavior of HCC cell in-vitro.

The sequence of NET-1 (Accssion No. NM 005727.3), EMS1 (Accssion No. NM 053056) and VEGF (Accssion No. NM 001287044.1) were obtained from National Center of Biotechnology Information (NCBI) GenBank (USA), and the single target siRNAs which targeting either NET-1, EMS1 or VEGF (NET-1_siR, EMS1_siR and VEGF_siR, 19 bp duplex with 2-nt 3'-overhangs) were designed and screened by our precious studies [27, 28]. And a siRNA which sequence has no homology with human genes was designed as negative control (NC_siR). All RNA oligonucleotides were chemically synthesized by Biomics Biotechnologies Co., Ltd. (Biomics Biotech, China). The oligonucleotide sequences were shown in Table 1. The cells were transfected in-vitro with siRNAs using Lipofectamine® 2000 transfection reagent (ThermoFisher, USA) according to the manufactures' instructions.

The multi-target siRNA (mtg_siRs) constructs targeting NET-1, EMS1 and VEGF were designed according to the principle of Biomics Biotech (China) (sequences shown in Table 2). The long single stranded RNAs (the length was >21 nt) were synthesized by in vitro transcription mediated by T7 RNA polymerase. Briefly, T7 RNA polymerase promoter (5'-CACTAATACGACTCACTATAGGG-3') conjugated DNA oligos that complementary to the interest RNAs were chemically synthesized. The RNAs were synthesized by T7 RNA polymerase with the rNTPs at 37 °C for 5 h. Final RNA products were obtained post purification.

Sequences of the single target siRNAs.

Sequences of the Multi-target siRNAs (Mtg_siRNA)

The siRNA validation vector siQuant (kindly provided by Dr. Quan Du of Peking University) [29] was used for detection of the gene silencing activity of mtg_siRs. When the siRNA validation vectors (siQNET-1, siQEMS1 and siQVEGF) were constructed, the activities of mtg_siRs were analyzed by dual luciferase reporter (DLR) assay according to the protocol of Du Q et al. [30]. Briefly, the DNA oligonucleotides were designed (Table 3), synthesized (Biomics Biotech, China) and annealed to DNA duplex. Then they were ligated to construct siRNA validation vectors containing siRNA target site of NET-1, EMS1 or VEGF, and all constructs were verified by sequencing. HEK293 cells were grown and seeded into 24-well plates at 1×105 cells/well for 24 h before transfection. The validation vector was co-transfected with pRL-TK (Promega, USA) with or without siRNAs. The cells were harvested after 24 h, according to the DLR assay manual (Promega, USA). And the activities of luciferase were measured on a Luminometer (Promega, USA). The firefly luciferase signal was normalized to the renilla luciferase signal for each individual well, and the knockdown efficacy of each siRNA was evaluated by relative luciferase activity unit (RLU). All experiments were performed in triplicates and repeated three times.

Sequences of the siQuant inserts.

Total RNA of cells were extracted by RISOTM RNA extraction reagent (Biomics Biotech, China) and then performed to a 25 μL PCR reaction: 12.5 μL of 2×Master Mix (Biomics Biotech, China), 0.5 μL of each forward and reverse primers (10 μM each), 0.5 μL of 50×SYBR Green I and 4 μL total RNA, then subjected to reverse transcription for 30 min at 42 °C and initially denatured at 95 °C for 5 min, and then to 45 cycles of amplification with the condition of: 95 °C denature for 20 s, 55 °C annealing for 30 s, and 72 °C extension for 30 s. Human glyceraldehyde-3-phosphate dehydrogenase (GAPDH) served as an internal control. All primers sequences were shown in Table 4. The experiment was performed in triplicate. The results were analyzed by 2-ΔΔCt method [31].

7.5×104 cells were cultured on a small round slide in a 24-well plate, when cells grown to about 50% confluence, they were treated as described above. Then cells were fixed with 4% paraformaldehyde for 30 min and permeabilized with 0.5 % Triton X-100 for 10 min, after being washed by PBS, blocked with 1% bovine serum albumin (BSA) for 30 min. Subsequently, cells were incubated at 4 °C overnight with antibodies as used in Western blot, and then with TRITC-conjugated goat-anti-rabbit IgG (for NET-1 or VEGF) and FITC-conjugated goat-anti-rabbit IgG (for EMS1) (1:50 dilution, Boster, China) for 2 h at room temperature. Hoechst 33258 (10 mg/mL) (ThermoFhisher, USA) was used for cell nuclei staining, after washed by PBS and mounted by Antifade Mounting Medium (Beyotime, China), cells were observed under immunofluorescence microscopy.

Annexin V-FITC/PI double staining and flow cytometry (FCM) analysis method was used to determine the cell apoptosis. Briefly, 1×106 cells/well in a 6-well plate treated with siRNAs for 48 h were harvested and washed in PBS, then re-suspended in binding buffer, followed by incubation with Annexin V-FITC conjugate and PI for 15 min, then detected by FCM analysis (BD Biosciences, USA).

HUVECs in-vitro angiogenesis model was used to evaluate inhibition effect. Briefly, 1×105 HUVECs were re-suspended in conditioned medium (which was the supernatant of cells treated with siRNAs for 48 h), then seeded in a 48-well plate which were coated by matrigel (BD, USA), and cultured in at 37 °C/5% CO2 incubator for 24 h, the numbers of branching points were counted under microscope (magnification 40×).

Wound-healing assay was used to detect the migration inhibition effect. Briefly, 3×105 cells/well were plated and treated as described above in a 12-well plate. Wound was made through confluent monolayer cells with a pipette tip post-transfected for 48 h and cells were washed with DMEM twice. Cell photos were taken at 0, 24, 48, and 72 h to monitor cell migration.

The multi-target siRNAs (mtg_siRs) targeting NET-1, EMS1 and VEGF were designed according to different structures (Fig. 1). The short single stranded RNAs and long single stranded RNAs (the length was >21 nt) of mtg_siRs were synthesized by chemical and in vitro transcription method separately, and mtg_siRs were obtained by annealing long RNA and corresponding short RNAs (Table 2, Fig. 1).

mtg_siRs were designed and synthesized by chemical and in vitro transcription method. (A) The designed different mtg_siRs structures, bold lines are sense strands and the thin lines are antisense strands, (B) The synthesitcal mtg_siRs detected by 15% polyacrylamide gelelectrophoresis (PAGE). 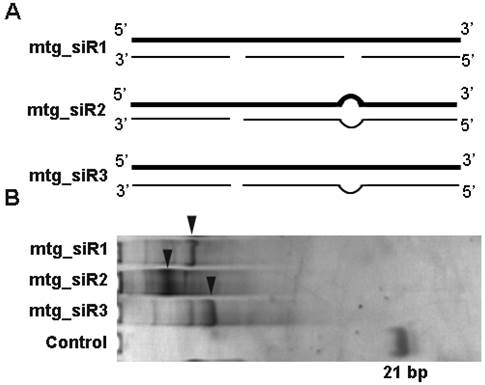 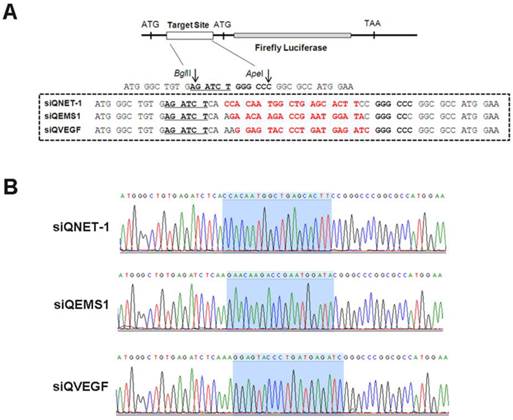 The activities of different multi-target siRNAs detected by DLR assay

The inhibition effects on the protein level of target genes were further determined by ICC method. As show in Fig. 6, the protein of NET and VEGF were labeled by TRITC (red), and EMS1 was labeled by FITC (green), the cell nuclei stained by Hoechst (blue). The results showed that the expression of NET-1, EMS1 and VEGF were inhibited by mtg_siR1, compared to NC_siR and untreated group. 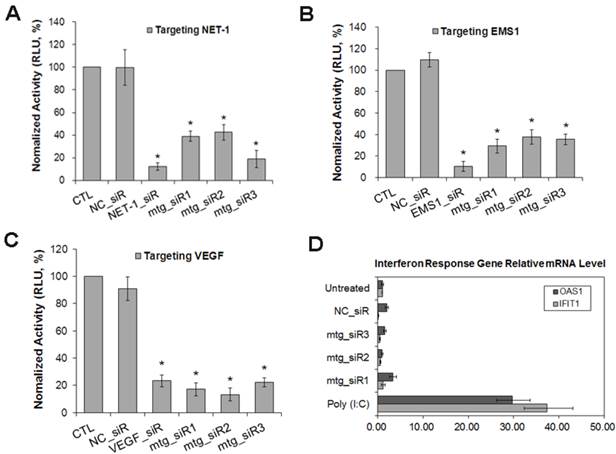 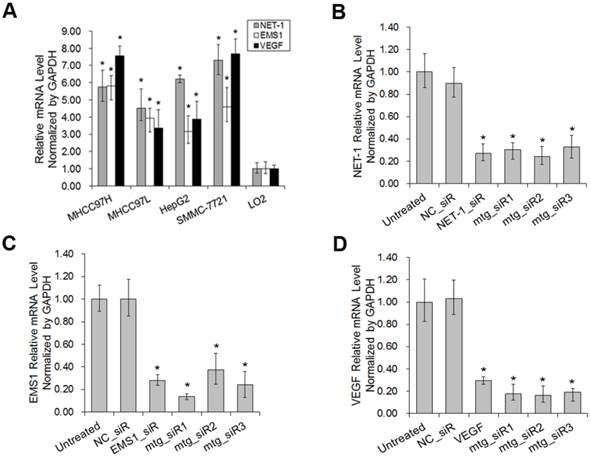 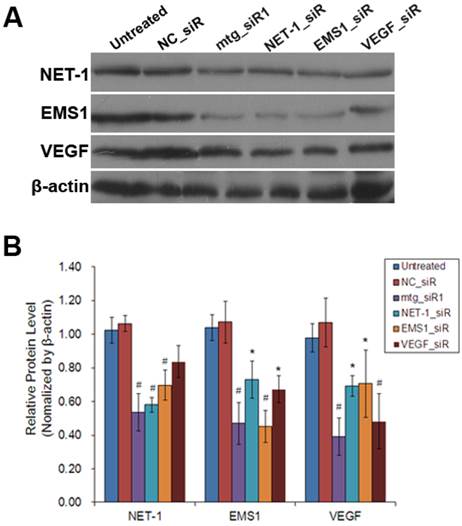 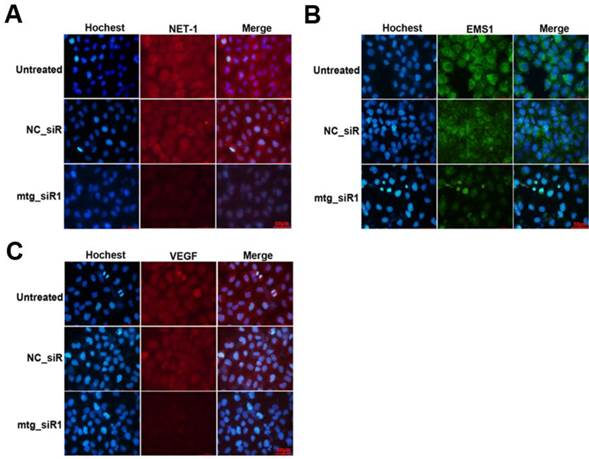 The viability of SMMC-7721 cells was measured by MTT assay. The absorbance values (490 nm) of the cells at 48, 72 and 96 h post-transfection with mtg_siR1, NET-1_siR, EMS1_siR and VEGF_siR were significantly lower than those of NC_siR treated cells and untreated cells respectively. There was no significant difference between the growth of cells treated with NET-1_siR, EMS1_siR and VEGF_siR, and the cell viability in mtg_siR1 treated group showed a significant decrease (P<0.05, Fig. 8A).

The cell invasion abilities with different treatments were detected by transwell assay, as Fig. 8B showed that the invasion of the cells treated with mtg_siR1, NET-1_siR, EMS1_siR and VEGF_siR were inhibited significantly post 48 h transfection (P<0.05). There was no significant difference of inhibition abilities between NC_siR and untreated cells (P>0.05), and the number of invasion cells in mtg_siR1 treated group was significantly decreased than that of NET-1_siR, EMS1_siR and VEGF_siR (P<0.05). 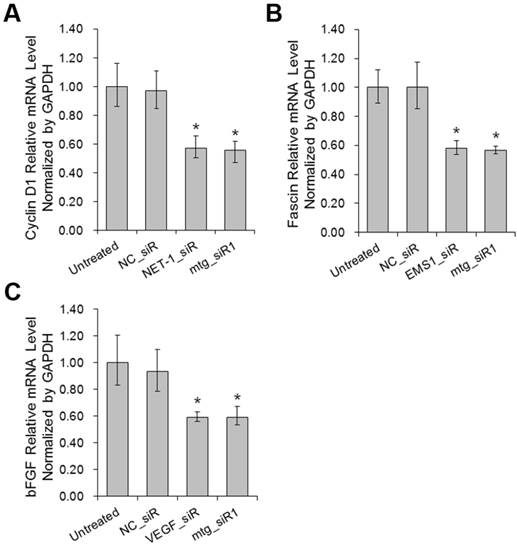 The suppression effects on cell viability, invasion, angiogenesis, migration and induced apoptosis by mtg_siR. (A) Cell growth curve of all groups at 0 h, 24 h, 48 h, 72 h, (B) Representative field photograph of transwell chamber assay under single-target siRNA and mtg_siR treatment after 48 h, (C) Cell apoptosis was measured by FCM analysis after AnnexinV/PI staining, (D) The tube formation photographs of each treatment in HUVECs angiogenesis model, (E) The ability of cell migration at 0 h, 24 h, 48 h, 72 h. 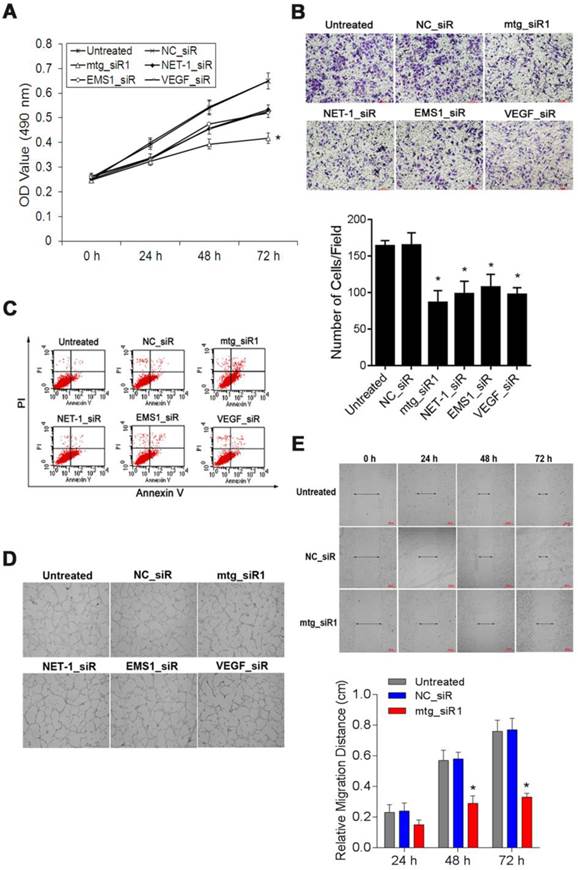 Multi-targeting therapies for cancers have been considered to be an effective approach, and RNAi strategy is a better method for multiple genes suppression, and there are many siRNA drugs in clinical trials which two or more gene inhibition simultaneously [8]. On the other hand, structural modified siRNAs had been widely used in RNAi therapeutics development, especially long double-stranded RNAs (dsRNA) were designed for carrying two or more siRNA sequences which targeting two or more parts in one mRNA or two or more mRNAs [34-36]. Current studies showed that, once long dsRNAs get into mammalian cells, they can be used as Dicer's substrates for siRNAs processing, then the corresponding genes could be inhibited effectively by siRNAs [1,2,8].

To validate the functions of designed multi-target siRNA structures accurately and quickly, we used a dual luciferase reporter (DLR) assay based on siQuant method [29]. The result showed that three designed structures (mtg_siR1, mtg_siR2 and mtg_siR3) were all have gene silencing efficiencies (Fig. 3). Then, we screened a HCC cell line (SMMC-7721) with high expressed NET-1, EMS1 and VEGF simultaneously for in-vitro functional study (Fig. 4). The mRNA and protein levels of NET-1, EMS1 and/or VEGF were suppressed by mtg_siR, NET-1_siR, EMS1_siR and VEGF_siR respectively (Fig. 4-6). And the proliferation gene (Cyclin D1), motility gene (Fascin) and fibroblast growth factor (bFGF) were determined to confirm the inhibition effects of the three genes (Fig. 7).

Furthermore, we demonstrated that the proliferation, migration, invasion and induced apoptosis of HCC cells were inhibited by multi-target siRNA (mtg_siR1) effectively, and the angiogenesis was also suppressed by it (Fig. 8).

The results of the in-vitro study were demonstrated that the designed multiple targeting siRNA (mtg_siR1) construct had RNAi activities on knockdown triple genes simultaneously. Moreover, NET-1, EMS1 and VEGF gene silencing simultaneously triggered by siRNA was much better than single target siRNA in the inhibition of either NET-1, EMS1 or VEGF gene. And, co-silencing of NET-1, EMS1 and VEGF could suppress the proliferation, migration, invasion and angiogenesis, while inducing apoptosis of HCC cells in-vitro.

The results showed that, multi-target siRNA might be a preferred strategy for multigenic disease therapy for cancers. Also, the result suggested that NET-1, EMS1 and VEGF would be effective target genes for HCC therapy.

This study was supported by the foundation of the production-study-research prospective joint research programs of Jiangsu Province, China (No. BY 2013042-06), and a project funded by the Priority Academic Program Development of Jiangsu Higher Education Institutions, and from the Science Foundation of Nantong City, Jiangsu Province, China (nos. BK 2014001 and HS 2014004).