Aim: Cytotoxic chemotherapy is the standard first-line therapy for patients with advanced non-small cell lung cancer (NSCLC) without specific gene alterations. This study examined the prescription pattern and the survival outcome of cytotoxic chemotherapy regimens in daily practice in Taiwan.

Methods: We established a population-based cohort of patients diagnosed with advanced NSCLC between 2005 and 2009 using the databases of Taiwan Cancer Registry and National Health Insurance in Taiwan. We then analyzed chemotherapy prescriptions and the survival outcomes of patients.

Results: A total of 25,008 patients with advanced NSCLC were identified, 17,443 (70.0%) of which received first-line chemotherapy and were therefore included in this study. Among them, 11,551 (66.2%) patients had adenocarcinoma and 3,292 (18.9%) patients had squamous cell carcinoma (SCC). Approximately 70% of the patients were diagnosed with NSCLC in medical centers. Platinum-based doublet chemotherapy was administered to 66.9% of the patients. Among all chemotherapy regimens, platinum with gemcitabine (33.8%) was the most common, irrespective of geographic region. The second and third most common regimens were vinorelbine alone (13.0%) and platinum with docetaxel (11.6%). The prevalence of platinum-based doublet chemotherapy regimens decreased from 71.4% in 2005 to 64.1% in 2009. Among patients with adenocarcinoma histology, those who received platinum with pemetrexed had longer OS than did patients who received other platinum-based regimens (p < 0.001).

Conclusion: Our findings reaffirm that in real-world practice, treatment plans of advanced NSCLC should be drawn up according to histology type.

Lung cancer is the leading cause of cancer-related death in Taiwan and around the world. Lung cancer is generally divided into two separate disease entities: small cell lung cancer and non-small cell lung cancer (NSCLC)[1-3]. Chemotherapy is the primary treatment for advanced NSCLC. Considerable advances in targeted chemotherapy have been made in the treatment of patients with NSCLC harboring specific gene alterations, such as epidermal growth factor receptor (EGFR) mutations and anaplastic lymphoma kinase (ALK) translocations[4, 5]. The overall survival (OS) of patients with advanced NSCLC has significantly improved since 2000[6, 7].

However, for NSCLC patients without those specific gene alterations, cytotoxic chemotherapy remains the key therapy[8-16]. Platinum-based doublet chemotherapy is the current standard first-line chemotherapy for these patients[10, 16-18]. Gemcitabine, vinorelbine, docetaxel, paclitaxel, and pemetrexed are standard chemotherapeutic agents coupled with platinum. Previous clinical trials have demonstrated similar efficacy among these diverse first-line chemotherapy regimens. However, these studies were conducted before the emergence of targeted therapy and did not reflect actual clinical practice, especially in Taiwan.

We previously demonstrated that different first-line chemotherapy regimens resulted in similar survival outcomes among patients with advanced lung squamous cell carcinoma (SCC) using three national databases in Taiwan[19]. In this study, we took this investigation one step further by exploring all types of NSCLC histology with the aim of identifying the various treatment patterns employed in daily practice in Taiwan.

We established a population-based cohort linking three national databases. This included the Taiwan Cancer Registry Database (TCRD), which is managed by the Health Promotion Administration, Ministry of Health and Welfare, Taiwan[20, 21]. All major cancer care providers in Taiwan are obligated to input patient data into the TCRD, including patient demographics, histology types, and the initial staging. This made it possible to retrieve all of the clinicopathologic characteristics of the patients from the TCRD. The second database was the claims database of the Taiwan National Health Insurance (NHI), which is a mandatory health insurance system covering more than 98% of the residents in Taiwan[22]. The NHI database was used to provide complete prescription records associated with all types of chemotherapy. The third database, the National Death Registry (NDR) database in Taiwan, was used to match for death events. All personal data were encrypted and analyzed anonymously. The release of all data used in this study was approved by the Data Release Review Board of the Collaboration Center of Health Information Application, Ministry of Health and Welfare, Executive Yuan, Taiwan. The protocol for this study was approved by the Research Ethics Committee of National Taiwan University Hospital.

We screened all of the patients registered in the TCRD between 2005 and 2009 for eligibility. The inclusion criteria included the following: 1. patients with histology-proven primary NSCLC (ICD-O-3 C339 and C34, excluding morphology codes of 8041, 8044 or 8045); 2. patients aged ≥ 18 years old; 3. patients who were initially diagnosed with advanced NSCLC, which was defined as stage IIIB or IV according to the American Joint Committee on Cancer (AJCC) 6th edition[23]. Patients with missing clinical data or those who were diagnosed with hematologic malignancies (ICD-O-3 morphology code 9140, 9590-9989) were excluded.

Patients were deemed to have received chemotherapy if they were prescribed cytotoxic or targeted chemotherapy drugs, including pemetrexed, tegafur, gemcitabine, vinorelbine, etoposide, paclitaxel, docetaxel, epirubicin, cisplatin, carboplatin, bevacizumab, gefitinib, and erlotinib. All lines of chemotherapy were defined according to the inclusion of non-platinum drugs. Drugs prescribed continuously with no more than 2 months interruption were considered same-line therapy.

Categorical variables were compared using the chi-square test. OS was calculated from the date of diagnosis for advanced NSCLC to the date of death or 31 December 2012, whichever came first. The data were regarded as censored if patients survived beyond the final date of the NDR database (December 31, 2012). OS was estimated using the Kaplan-Meier method, and the log-rank test was used to compare differences between groups. Two-sided p values less than 0.05 were considered statistically significant. All analyses were performed using SAS software, Version 9.3 (SAS Institute Inc., Cary, NC, USA). 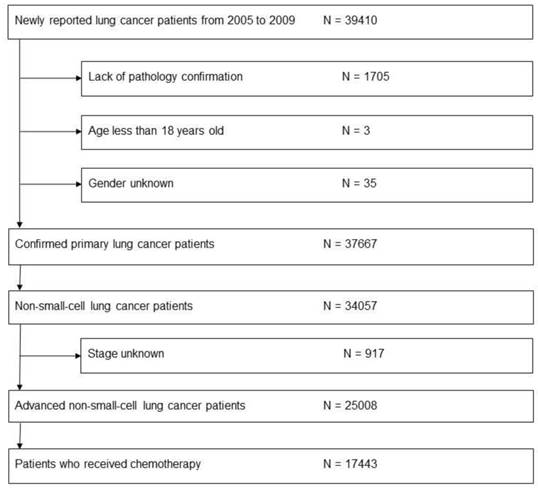 Between 2005 and 2009, the prevalence of platinum-based doublet chemotherapy decreased from 71.4% to 64.1% despite an increase in the actual number of patients (Table 3). Platinum with gemcitabine presented the most pronounced decrease, from 37.8% in 2005 to 27.1% in 2009; however, it remained the most common regimen. Vinorelbine monotherapy increased rapidly from 4.9% in 2005 to 17.4% in 2009. Within the study period, the number of patients receiving subsequent chemotherapy after first-line chemotherapy gradually increased from 61.6% in 2005 to 68.6% in 2009.

*Due to personal privacy protection regulation, the numbers of these columns were not accessible

Regimens used in first-line chemotherapy according to yearly distribution

Regimens used in first-line chemotherapy according to geographic distribution

Irrespective of geographic region, platinum with gemcitabine was the most common first-line chemotherapy regimen administered in Taiwan (Table 4). The prevalence of this regimen was highest in central Taiwan (43.2%) and southern Taiwan (36.9%). Platinum with docetaxel was more commonly used in the Northern region (21.4%) compared to other regions. Platinum with vinorelbine was more commonly used in the KPE region (16.4%). Physicians in the Taipei and Central regions were more likely to opt for single agents as first-line treatment, compared to physicians in other regions. Among the single agents, physicians in the Taipei, Northern, and Southern regions preferred vinorelbine, whereas physicians in central Taiwan preferred gemcitabine.

Kaplan-Meier plots of OS of patients with various NSCLC histologies 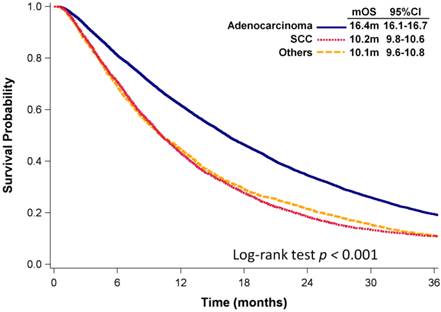 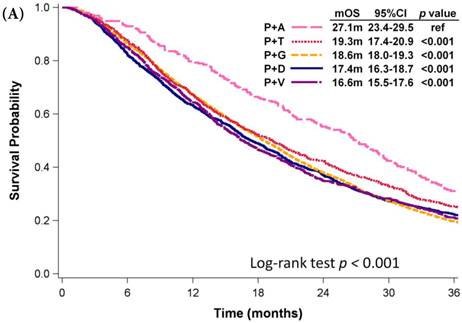 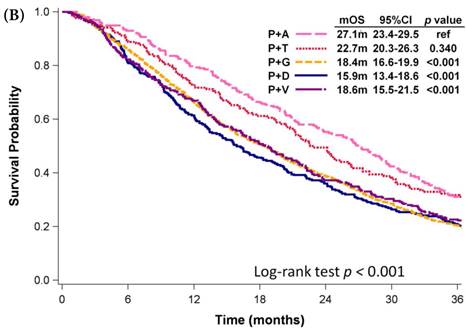 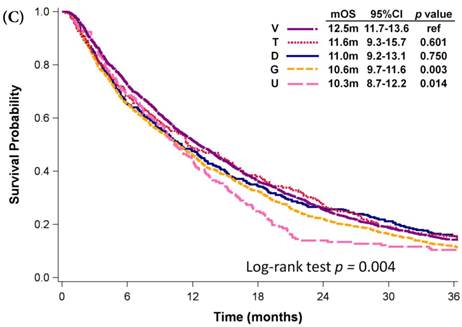 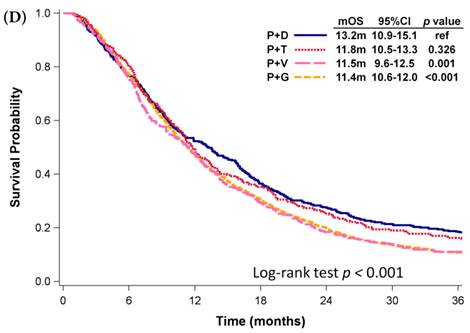 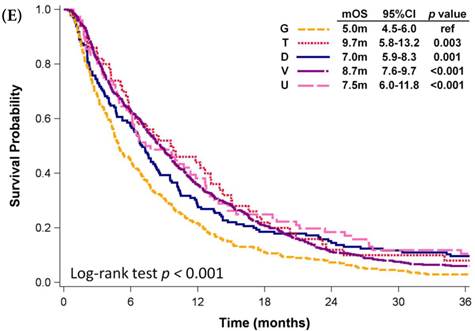 In this study, approximately 70% of patients with advanced NSCLC in Taiwan received first-line chemotherapy. Among them, 66.9% received platinum-based doublet chemotherapy. Patients with adenocarcinoma had significantly longer mOS than did patients with other histologies. Platinum with gemcitabine was the most common first-line regimen in Taiwan, irrespective of geographic region. EGFR inhibitors as first-line therapy were not yet being reimbursed by the NHI during the study period; therefore, we did not analyze these compounds.

Platinum with gemcitabine was shown to be the most common first-line chemotherapy regimen in Taiwan; however, various other regimens were more common in specific regions, such as platinum with docetaxel in northern Taiwan and platinum with vinorelbine in the KPE region. Here existed several explanations. First, histology distribution differed among the various geographic regions; i.e., 11.1% of the patients with advanced NSCLC in the central region were diagnosed with other histologies, compared to 20.5% of the patients in the southern region. By contrast, 70.2% of the patients in the Taipei region were diagnosed with adenocarcinoma, compared to around 60% of the patients in the northern and southern regions. Second, physicians and hospitals may have been following established standards with regard to first-line regimens, based on the fact that many clinical trials have proved that most types of first-line chemotherapy provide similar survival benefits[13, 14, 17, 19, 24].

Among patients with advanced lung adenocarcinoma, those who were administered platinum with pemetrexed exhibited longer mOS than did patients who received other first-line platinum-based doublets chemotherapy. This is comparable to the results of previous clinical trials and retrospective studies[8, 25-27]. Pemetrexed was not approved as first-line chemotherapy for advanced lung adenocarcinoma until 2009; therefore, we restricted our analysis to patients who were diagnosed in 2009. Nonetheless, the results were much the same. An mOS of 27.1 months among patients who received platinum with pemetrexed was surprisingly good, compared to historical controls[8, 25-28]. This may be related to the high prevalence of EGFR mutations among cases of adenocarcinoma in Taiwan as well as the reimbursement of EGFR inhibitors as salvage therapy by the NHI. Overall, 63.4% of patients who received platinum with pemetrexed as first-line chemotherapy were subsequently reimbursed with EGFR inhibitors.

Nearly 30% of the patients received single agent chemotherapy as first-line therapy in Taiwan. For patients who were considered unfit for platinum-based chemotherapy due to poor performance or advanced age, this approach is reasonable. Meta-analysis revealed that for elderly patients with late stage NSCLC, doublet chemotherapy did not extend OS beyond that achieved by using single-agent chemotherapy[29]. Among the various single agents, a clinical trial in which only patients with poor performance status were enrolled presented no significant difference between vinorelbine and paclitaxel. Our results show that patients with adenocarcinoma who received vinorelbine alone had better OS than did patients who received gemcitabine or tegafur/uracil. However, selection bias may have a strong influence on this finding. Whether vinorelbine is indeed a better choice for patients considering single-agent therapy remains to be clarified.

The gradual decrease in the use of first-line platinum-based doublet chemotherapy within the study period may be associated with the emergence of targeted chemotherapy, such as EGFR inhibitors. Although gefitinib as salvage therapy for advanced NSCLC was reimbursed by the NHI, it was not approved as first-line therapy until 2011. This study was unable to monitor prescription patterns that did not fall within the scope of NHI reimbursement. The use of EGFR-targeted therapy may have resulted in a decline in the use of platinum-based chemotherapy.

This study has a number of limitations. As mentioned previously, we were unable to analyze prescriptions that are not covered by the NHI, such as when medication is paid for by the patients themselves or in the case of clinical trials. We were also unable to access data related to the performance status of patients, which probably exerted a significant impact on the selection of chemotherapy regimens. History of tobacco use was not recorded in the databases as well. The impacts of certain important comorbidity diseases, such as chronic obstructive pulmonary disease and diabetes, were not clear. Furthermore, EGFR mutation and other gene alterations status were not available in our data.

The study was supported by the Science and Technology Unit, Ministry of Health and Welfare, Taiwan (Grant No. DOH102-NH-9002).