Serum levels of osteocalcin (OC), a bone matrix non-collagenous protein secreted by osteoblasts, are correlated with pathological bone remodeling such as the bone metastasis of cancer, as well as physiological bone turnover. The pathological roles in prostate cancer growth of the two existing types of serum OC, γ-carboxylated (GlaOC) and lower- (or un-) carboxylated (GluOC), have not yet been discriminatively examined. In the present study, we demonstrate that normal prostate epithelial cell growth was promoted by both types of OC, while growth of cancer cells in the prostate was accelerated by GlaOC but suppressed by GluOC. We suggest that OC regulates prostate cancer growth depending on the γ-carboxylation, in part by triggering reduced phosphorylation of receptor tyrosine kinases.

Cell viability was determined with a WST-8 assay (Cell Count Reagent SF; Nakalai Tesque, Kyoto, Japan) and a BrdU uptake assay (BrdU Cell Proliferation ELISA Kit; Exalpha Biologicals, Shirley, MA, USA). Each cell seeding density was optimized before experiments. Prior to assays, cells were treated with vehicle, GluOC or GlaOC (1, 10, 100 ng/ml), in 96-well culture plates in 100 μl for 24 h or 48 h, after preculture in each maintenance medium for 24 h.

Dunnett's test or Student's t-test were performed for statistical analysis where appropriate. P values < 0.05 were considered to be statistically significant. Results are expressed as mean ± standard deviation (SD).

Effects of GlaOC and GluOC on human prostate cell growth. Effect of GlaOC (A) and GluOC (B) on PC-3, PPC-1, and ProEpi cells. Each assay was performed in triplicate. Left and right panels represent WST-8 (cell viability) assays at 24 h and 48 h and BrdU uptake (DNA synthesis) assays at 24 h, respectively. The data represent mean ± SD from three experiments. Mean data are expressed as a ratio of the control. *P < 0.05 and **P < 0.01 versus the corresponding value for cells treated with vehicle. 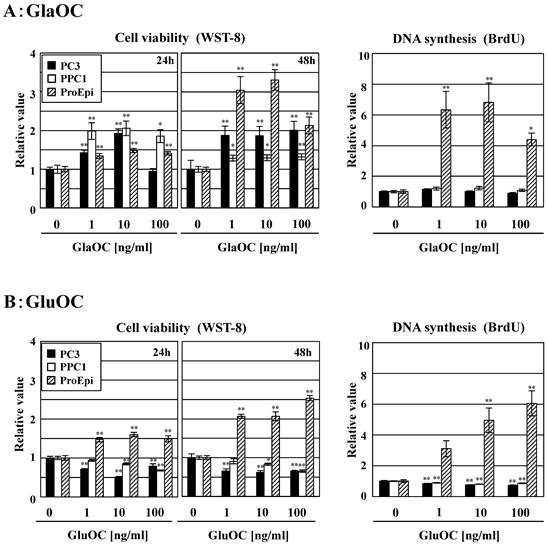 GlaOC at concentration of 1-100 ng/ml dose-dependently promoted the viability of the human prostate cancer cell lines PC-3 and PPC-1 in a WST-8 assay for 24 h, except for PC-3 cells at 100 ng/ml at 24 h (Fig 1A). We also assayed WST-8 for 48 h; more promotion than that for 24 h was observed, except for PPC1 cell line. In contrast, GluOC at the same concentrations inhibited viability of these two cell lines at 24 h and 48 h (Fig 1B). We further investigated a BrdU incorporation assay to examine the differential effects of GlaOC and GluOC on cell proliferation. GluOC dose-dependently decreased the incorporation of BrdU in the two prostate cancer cell lines in a similar manner as in the WST-8 assay, while the effect of GlaOC was not significantly manifested in this assay for unknown reasons (Fig 1AB). In contrast, both GlaOC and GluOC promoted the growth of the ProEpi cell line of normal prostate epithelial cells, as assessed by WST-8 (at 24 h and 48 h) and BrdU assays (at 24 h) (Fig 1AB). These results indicate that GlaOC and GluOC have stimulatory and inhibitory effects on prostate cancer cell growth, respectively, but that normal prostate epithelial cells respond in a similar manner to both forms.

Phospho-RTKs array in PPC-1 (A) and ProEpi (B) cells. Quantitation of the dot densities of phospho-RTKs was performed using scanning images and ImageQuant LAS 4000 software (GE Healthcare UK, Buckinghamshire, England). Each pair of the kinase dots that increased (red) or decreased (blue) compared with the controls is enclosed in a square. Each assay was repeated three times. Four separate results are summarized in the graphs. *P < 0.05 versus the corresponding value for the control. 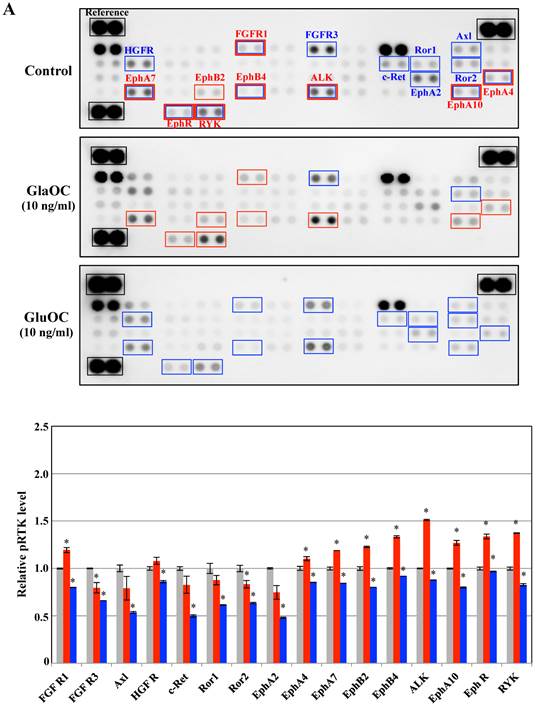 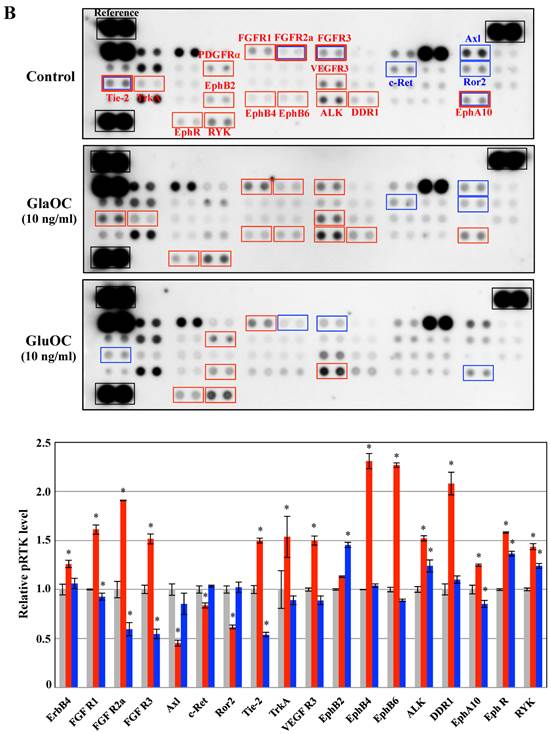 These results indicate that GlaOC promotes prostate cancer cell proliferation through the activation of nine RTKs, although it remains unclear whether GlaOC is a direct ligand for those RTKs. The mechanisms for GlaOC effect are currently unknown because the receptors for GlaOC and the signaling cascade have not yet been identified, but the tyrosine kinases are involved in the growth promotion since LY294002, an inhibitor for PI3 kinase and U0126, an inhibitor for MEK1/2 kinase, down-stream kinases after tyrosine kinase activation completely blocked the growth promotion by GlaOC (data not shown). On the contrary, GluOC is recognized by a tentative receptor, GPRC6A, followed by activation of cAMP production and protein kinase A [10], which might be implicated in the inhibition of several tyrosine kinases. We here suggest that GluOC could be a potential therapeutic agent against cancer, as it might inhibit the RTK-related signal transduction that is constitutively active in malignant cells [11].

Phosphorylation of RTKs using ProEpi cells, normal cells displayed different patterns, except for EphA10 (Fig. 2B). The most distinctive feature was that GluOC triggered increased phosphorylation of six RTKs in ProEpi cells, FGFR1 [12], EphB2 [16], EphR [18], ALK [19], RYK [20], and PDGFRα (platelet-derived growth factor receptor alpha) [26], which may be correlated with the proliferative activity triggered by GluOC in normal cells. On the other hand, GlaOC also triggered increased phosphorylation of the same RTKs as GluOC, including FGFR1 [12], EphR [18], ALK [19], and RYK [20]. Additionally, GlaOC promoted the phosphorylation of additional nine RTKs, EphA10 [15], EphB4 [17], EphB6 [27], FGFR2a [28], FGFR3 [22], DDR1 (discoidin domain receptor 1) [29], VEGFR3 [30], Tie-2 [31], and TrkA [32] (Fig 2B). The mechanisms for GluOC to promote the growth in normal cells, likely by activation of tyrosine kinases are currently unknown.