Transcription factor AP-2 alpha (AP-2α or TFAP2A) is a newly identified prognostic marker of chemotherapy; its expression is positively correlated with chemosensitivity and survival of cancer patients. Using computational programs, we predicted that the coding region of AP-2α gene contains a potential miRNA response element (MRE) of miR-193a-5p, and the single nucleotide polymorphism (SNP) site (c.497A>G, rs111681798) resides within the predicted MRE. The results of luciferase assays and Western blot analysis demonstrated that miR-193a-5p negatively regulated the expression of AP-2α proteins, but have no influence on the mutant AP-2α (c.497A>G). Infection with lentiviral AP-2α gene or miR-193a-5p inhibitor in the bladder cancer cells decreased migration and cisplatin resistance, while knockdown of AP-2α gene or overexpression of miR-193a-5p in the urothelial cell line SV-HUC-1 increased migration and cisplatin resistances. We concluded that miR-193a-5p induced cisplatin resistance by repressing AP-2α expression in bladder cancer cells.

However, only a subset of patients is sensitive to cisplatin-based therapy. Galsky et al's investigated the effectiveness of neoadjuvant therapy for muscle-invasive bladder cancer and found that pathologic complete response rate was about 30% in the patients who received cisplatin-based combination chemotherapy [3]. Therefore, it is necessary to identify reliable markers for assessing chemotherapeutic response. The molecular mechanism of cisplatin therapy is linking to its ability to cause DNA damage, and subsequently induce apoptosis in cancer cells [4]. Therefore, most apoptosis-related proteins are found to affect the sensitivity to cisplatin. Usually, anti-apoptotic proteins (i.e., Bcl-2) are linked to poorer survival in patients with invasive bladder cancer treated with chemotherapy, while pro-apoptotic proteins are the predictive markers for a good response and survival. Up to now, many proteins have been identified to be associated with the response to cisplatin based chemotherapy in bladder (reviewed in [5]). Among these, transcription factor AP-2 alpha (AP-2α or TFAP2A) is a newly identified prognostic marker of chemotherapy [5]. It is a member of the transcription factor AP-2 family, functions as a tumor suppressor by regulating the expression of various cancer-related genes, such as p21 [6], MMP9 [7], E-cadherin [7], Bcl-2 [8] and Bax [8]. AP-2α expression was positively associated with chemosensitivity in breast [9], bladder [10], endometrium [11] and pancreas [12] cancers. In cancer cells, AP-2α is usually downregulated by promoter hypermethylation [13, 14] or miRNAs [11], leading to chemoresistance [11].

miRNAs are a class of short single-stranded RNAs, which suppress gene expression by binding to the 3′-unstranslated region (UTR) of the target mRNA to inhibit translation and/or promote mRNA degradation. Recently, an increasing number of studies demonstrated that miRNAs also target the 5′-UTR [15] and coding region [16, 17] of mRNAs. miRNAs have been involved in various cell processes, including chemoresistance. For example, miR-203 enhances chemosensitivity to cisplatin in bladder cancer by targeting Bcl-w and Survivin [18]. Xu et al [19] comprehensively investigated the relationship of miRNA expression with the progression and prognosis of muscle-invasive bladder cancer, and found that the patients with higher let-7c, mir-125b-1, mir-193a, and mir-99a levels exhibited shorter survival intervals. Our previous study demonstrated that miR-200b/200c/429 induced cisplatin resistance by repressing AP-2α expression in endometrial cancer cells.

In present study, we found that miR-193a-5p inhibits the expression of AP-2α by binding its coding region, and then induces cisplatin resistance in bladder cancer cells.

The dual-luciferase miRNA target expression vector pmirGLO was purchased from Promega Corporation (Madison, WI, USA). The vector pmirCDS was modified from pmirGLO using seamless cloning kit (Sinobio, Shanghai, China). The difference between them is that the multiple cloning site (MCS) of pmirGLO is located downstream of firefly luciferase gene, but the MCS of pmirCDS is located within the 3′-end of the coding sequence (CDS) of firefly luciferase gene. The sequence cloned into pmirCDS will be expressed as fusions to the C-terminus of firefly luciferase. The oligonucleotide pairs that contain the binding site of miR-193a-5p were synthesized, annealed and ligated into the vector pmirGLO and pmirCDS as the method described previously [11], these constructs are denoted UTR-MRE, mUTR-MRE, CDS-MRE, mCDS-MRE, respectively. Overlapping PCR [22] was performed using Myc-tagged AP-2α expression construct Myc-AP-2α as a template, to generate two Myc-tagged AP-2α mutant (Myc-AP2α497G, with a substitution of c.497A>G; Myc-AP2α498T, with a substitution of c.498C>T).

Total RNA was extracted from various cell lines using TRIzol reagent (Invitrogen, Carlsbad, CA, USA). The expression of miRNA-193a-5p was determined using All-in-One miRNA qRT-PCR Detection Kit (GeneCopoeia, Guanzhou, China). Briefly, Poly-A polymerase is used to add poly-A tails to the 3′ end of miRNAs, and then miRNAs were reverse transcribed into cDNA using M-MLV RTase and a oligodT adaptor primer. SYBR green-based realtime PCR was performed using miRNA-specific primer and universal adaptor primer on an ABI 7900 thermocycler (Thermo Fisher Scientific). The U6 gene was used as a normalization control. The above primers and enzymes were purchased from GeneCopoeia.

All the lentiviruses expressing AP-2α gene, AP-2α shRNA (target sequence: 5′-TTTCTCAACCGACAACATT-3′), has-miR-193a-5p precursor and has-miR-193a-5p inhibitor and their empty vector lentivirus (GV341, GV248, GV309, GV280, respectively) were purchased from GeneChem (Shanghai, China). Lentiviruses were transduced into cells at a multiplicity of infection (MOI) of 10 in the presence of polybrene.

At 72h after transduction, cells were seeded on 96-well plates and treated with different concentration of cisplatin (Selleck Chemicals, Houston, TX, USA) for the indicated time. Then, the cells were cultured on media with 3-(4, 5-methylthiazol-2-yl)-2, 5-diphenyl-tetrazolium bromide (MTT) (0.5mg/mL) for 4 h. Media were removed and 100 μL dimethyl sulfoxide (DMSO) was added to solubilize formazon crystals. Absorbance was measured at 490 nm in a Biotek Synergy 2 plate reader (Biotek; Winooski, VT, USA). Based on the result of MTT assay, the IC50 (half maximal inhibitory concentration) of cisplatin was calculated using Microsoft Excel.

Cells were cultured on a 24-well plate until 100% confluence and then wounded with a 100 μL pipette tip. Migration photos were captured at 0, 24, and 48h hours after scratching. All experiments were repeated in triplicate independently.

Microsoft Excel was used for statistical analysis. Student's t-test was performed to evaluate the significance of difference between samples.

We used several computational programs to predict the miRNAs regulating AP-2α gene, and found a binding site (miRNA response element, MRE) of miR-193a-5p in the coding region of AP-2α gene (Fig. 1A). Then, by searching the Ensembl database, we identified an SNP(c.497A>G, rs111681798) within the MRE. To determine whether the predicted MRE can be recognized by miR-193a-5p, we generated a Myc-tagged wild-type and two mutants (c.497A>G and c.498C>T) AP-2α expression plasmids, and co-transfected with miR-193a-5p mimics into 293T cells. At 24 h post-transfection, cell lysates were prepared and subjected to Western blotting assay using anti-Myc antibody. The result showed that the wild-type AP-2α expression can be inhibited by miR-193a-5p, but 497A>G or 498C>T substation can disrupt the suppressive role of miR-193a-5p on AP-2α expression (Fig. 1B). 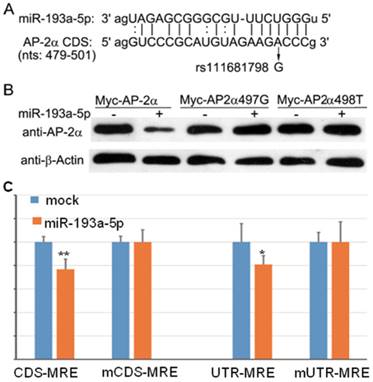 Then, we cloned wild-type and mutant MRE into 3′-UTR of firefly luciferase and transfected into 293T cell with or without miR-193a-5p mimics. As shown in Figure 1C, luciferase activity of UTR-MRE can be repressed by miR-193a-5p as CDS-MRE, indicating that the MRE in the 3′-UTR functions as efficiently as it in the CDS.

Influence of miR-193a-5p on AP-2α expression. (A)Quantitative analysis of miRNA-193a-5p expression on various cell lines by realtime PCR. (B) Expression of AP-2α protein in three cell lines using Western blotting. (C)(D) Expression of AP-2α protein in UM-UC-3 cells (C) and SV-HUC-1 cells (D). (E) Influence of miR-193a-5p on AP-2α downstream targets. All the cells were infected with lentivirus, and harvested for Western blot at 72 h after infection. 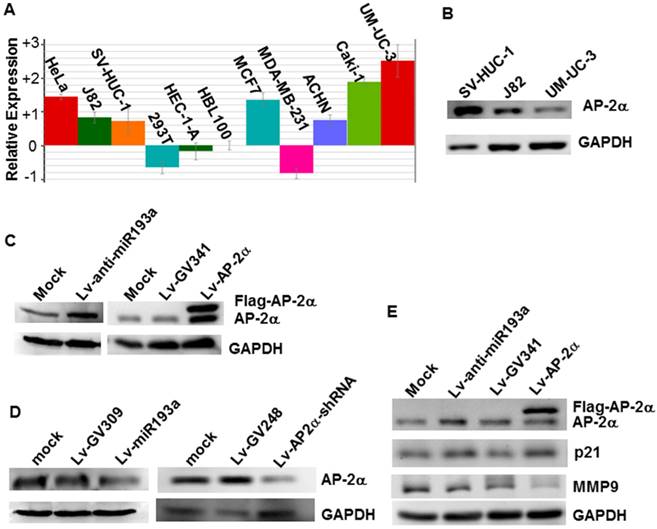 Representative pictures of wound healing dynamics. UM-UC-3 (A, C) and SV-HUC-1 cells (B, D) infected with the indicated lentivirus were cultured on a 24-well plate until 100% confluence and then wounded with a 100 μL pipette tip. Migration photos were captured at 0, 24, and 48h hours after scratching. 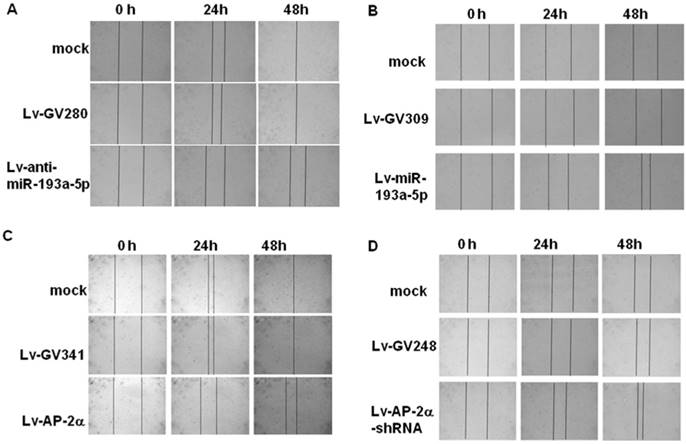 Influence of miR-193a-5p and AP-2α on cisplatin sensitivity. UM-UC-3 cells were infected with lentiviral miR-193a-5p inhibitor or AP-2α gene. At 72h after transduction, cells were seeded on 96-well plates and treated with different concentration of cisplatin for 36 h. The cell viability was determined by MTT assay. 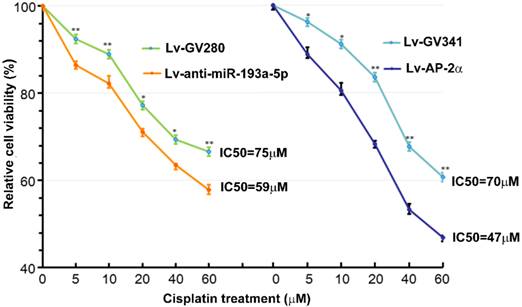 Additionally, we found that inhibition of miR-193a-5p or overexpression of AP-2α gene decreased cisplatin resistance in bladder cancer cell line UM-UC-3. These results are in accordance with previous studies [10, 19]. Xu et al comprehensively analyzed the microRNA (miRNA) expression profiles in muscle invasive bladder cancers, and found that miR-193a expression is negatively correlated with patient survival [19]. Conversely, AP-2α has been reported to be as a predictive marker for good response and survival after cisplatin-containing chemotherapy in several cancers [9-12]. Nordentoft et al demonstrated that high levels of AP-2α protein in bladder cancers were associated with good response to cisplatin, and AP-2α knockdown increased the proliferation of the SW780 bladder cells and reduced cisplatin and gemcitabine sensitivity [10]. These results indicate that miR-193a-5p induces cisplatin resistance by inhibiting AP-2α expression.