Introduction: The incidence of echinoderm microtubule-associated protein-like4-anaplastic lymphoma kinase (EML4-ALK) mutation among surgically treated patients with adenocarcinoma of the lung of the Eastern European ethnicity is underreported. The aim of this trial was the determination of EML4-ALK mutation frequency in investigated population, and the evaluation of correlations between lung adenocarcinoma subtype and clinical characteristics with mutation status.

Patients and methods: This was a prospective trial which included 195 patients with adenocarcinoma of the lung who underwent surgical treatment. ALK mutation screening was performed by immunohistochemistry (IHC). IHC scores of 2+ and 3+ were regarded as positive. Confirmatory FISH was performed in all IHC positive and in 2:1 ratio in negative patients.

Lung cancer remains number one cause of cancer related morbidity and mortality worldwide. In past decade, we witnessed a significant revolution in understanding the molecular pathogenesis of lung cancer. There was a major shift in frequency of histology subtypes of non-small cell lung cancer (NSCLC); adenocarcinoma became major histological type alternating squamous cell lung cancer. The emergence of new oncogenic targets resulted in the development of new treatment options for lung cancer. The inhibitors for some of the most explored targets such as echinoderm growth factor receptor (EGFR), vascular endothelial growth factor receptor (VEGFR), and anaplastic lymphoma kinase (ALK) rearrangement are already in everyday therapeutic use. However, the frequency of these targets varies greatly in different populations. EGFR mutations are most common in the Far East Asian population, the frequency of VEGFR alteration is difficult to detect, and data on ALK mutation frequency are insufficient.1-3 This lack of data is one of the most significant obstacles for the introduction of novel therapies, especially in developing countries. Along with other factors (mainly financial) it usually prevents healthcare systems in adequate planning of healthcare budgets for oncological molecular (targeted) therapy. This results in the lack of reimbursement for such therapies in certain developing countries.3-7 The lack of data on Serbian population is one of the main reasons for reluctance of healthcare system to approve reimbursement of ALK inhibitors. Similar situation could be translated to the surrounding low income eastern European countries. Since the cost of molecular testing is also important issue, narrowing of indications, especially to the subtype of lung adenocarcinoma might be one of the justified strategies for decrease of molecular testing costs.

The prognostic and predictive values of ALK mutation in resected adenocarcinoma patients are proven in large scale trials, one of which originated from Europe 6, however this trial did not evaluate the histology subtype of the adenocarcinoma. Since large differences exist in NSCLC common mutation rates among different races it is necessary to explore each region separately in order to establish true relationship and mutation frequency for specific geographic regions and populations.

The study was a prospective, non-randomized trial, conducted at the Institute for Pulmonary Diseases of Vojvodina in the period from January 2012 to December 2014. The study was approved by the institutional review and ethics board. All of the patients who decided to participate in the study were informed about the genetic testing procedure, potential benefits and the risks, and all of them had signed institutional informed consent form.

All available pathology slides from each case were reviewed to verify the diagnosis and to select the representative block containing the most viable tumor cells by two pathologists. The IHC and FISH testing sequence is given in Figure 1. IHC scores of 2+ and 3+ were regarded as positive.

Flowchart of IHC and FISH testing in studied population. 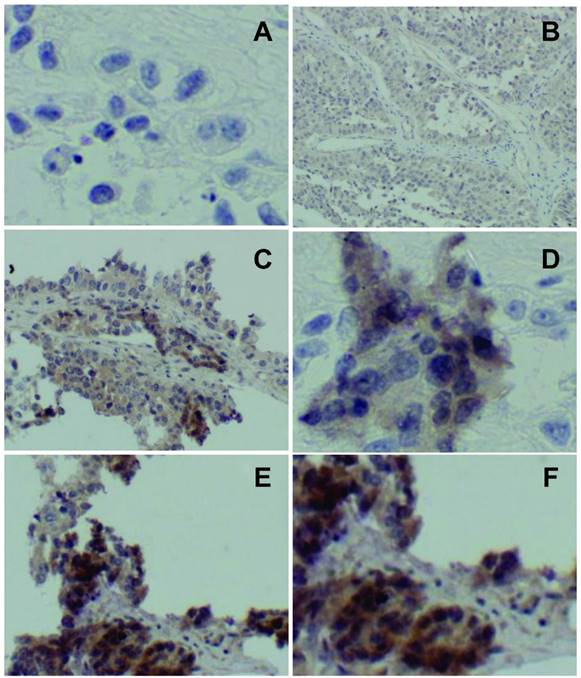 FISH was performed in all IHC positive patients and in 2:1 ratio on IHC negative patients. Vysis ALK break-apart FISH probe was used according to instructions given in the package kit (Abbott Molecular, Des Plaines, IL, USA).

Descriptive statistics were generated for all study variables, including mean and standard deviation (SD) for continuous variables and relative frequencies for categorical variables. The χ2 test, the Fisher's exact test and the two-tailed Mann-Whitney test were used to assess the relation between mutation status and clinicopathological parameters. All probability values were calculated by assuming a 2-tailed α value of 0.05 with confidence intervals at the 95% level. All statistical analyses were performed with SPSS for Windows version 15.0 (SPSS Inc., Chicago, IL).

TNM status, stage and type of resection in patients with resected adenocarcinoma of the lung.

The frequency of EML4-ALK mutation in the Eastern European population of Northern Serbia is 5.1% and stands in concordance with previously published results in other Caucasian populations. IHC with high sensitivity and solid specificity could be a reasonable option for screening the patients with adenocarcinoma of the lung. Its negative predictive value is of utmost importance to exclude false positive results. In our population EML4-ALK mutation is significantly related to acinar subtype of the lung adenocarcinoma.

The study was supported by the grant of the Serbian Ministry of Science and Technology, grant number 175056.

The study has been performed in accordance with the ethical standards of the Declaration of Helsinki and its later amendments. The study was approved by the ethics committee of Institute for Pulmonary Diseases of Vojvodina. Written informed consent was obtained from each patient.

The authors have no relevant affiliations or financial involvement with any organization or entity with a financial interest in or financial conflict with the subject matter or materials discussed in the manuscript. This includes employment, consultancies, honoraria, stock ownership or options, expert testimony, grants or patents received or pending, or royalties.

3. Hu H, Pan Y, Li Y. et al. Oncogenic mutations are associated with histological subtypes but do not have an independent prognostic value in lung adenocarcinoma. OncoTargets and therapy. 2014;7:1423-1437