The Effects of Anti-inflammatory Drug Treatment in Gastric Cancer Prevention: an Update of a Meta-analysis

Gastric cancer has high incidence and fatality rates, making chemoprevention agents necessary. There is an ongoing debate about aspirin/nonsteroidal anti-inflammatory drugs (NSAIDs) use can significant reduce the risk of GC. We conducted a meta-analysis of existing studies evaluating the association of anti-inflammatory drug and GC. We performed a systematic literature search of PubMed, Web of Science, Embase, OVID, Cochrane Library and Clincialtrials.gov up to August 31, 2015. Either a fixed-effects or a random-effects model using was based on the result of homogeneity analysis. Subgroup, sensitivity, meta-regression, and publication bias analyses were evaluated. Forty-seven studies were finally included in this meta-analysis. The overall GC risk reduction benefit associated with anti-inflammatory drug use represented an RR of 0.78 (95% CI 0.71 to 0.85) and an adjusted RR of 0.74 (95% CI 0.71 to 0.77). Besides, the prevention benefit of aspirin/NSAIDs ingestion appeared to be confined to those patients with regiment of short or middle-term (≤5 years), high-frequency (>30 times per month) and low dose (<200 mg per day). Further, our data also suggest that COX-2 inhibitors use is a more effective approach in GC prevention (RR, 0.45; 95% CI, 0.29-0.70). In this meta-analysis, our finding support short or middle-term (≤5 years), high-frequency (>30 times per month) and low dose (<200 mg per day) aspirin/NSAIDs intake is a well method for GC prevention and also confirm the inverse association between aspirin/NSAIDs use and GC risk. Additionally, selective COX-2 inhibitors use probably a more effective approach to reduce GC risk.

Globally, there were 951,600 new gastric cancer (GC) cases and accounted for 723,100 deaths in 2012[1]. GC is a major public health burden internationally, especially in parts of the developing countries (677,100 new cases in 2012). Recently, some therapeutic advances its prognosis is often unfavourable, and despite the decrease in overall incidence[2]. Thus, effective and inexpensive strategies for prevention of GC are urgently needed in the developing world.

Non-steroidal anti-inflammatory drug (NSAID) are a structurally diverse group of drugs that are most widely used to treat pain, inflammation and fever over the past decades, fundamentally including aspirin, celecoxib, acetaminophen, and other NSAIDs. These drugs are inhibitors of the enzyme cyclooxygenase (COX) and thereby affect the production of prostaglandin signalling molecules (PGs). Two isoforms of COX are well-known: COX-1 for the production of PGs during basal conditions in the gastrointestinal tract and an inducible COX-2 regulated by growth factors, mitogens, and tumor promoters [3]. Until recently, compelling data from a large and rapidly expanding body of studies indicate that aspirin and other NSAIDs is associated with a decreased risk of colorectal, lung, and other carcinomas [4-6]. Nevertheless, the exact mechanism of risk reduction is still undetermined but may be related to these agents have decreased the level of prostaglandin E2 (PGE2). It is reported that PGE2 may modulate various immune responses, increase cells' longevity via inhibition of apoptosis, and stimulate cancer cell proliferation [7-9]. Since 1970s, a host of prior large epidemiologic studies and meta-analyses strongly support a protective association between aspirin/NSAIDs ingestion and gastric adenocarcinomas [10-18]. However, several studies argue that using aspirin or other NSAIDs does not lower risk of GC [19-21]. More recently, many novel studies have payed close attention to this topic [22-29]. Therefore, it is necessary to conduct an update meta-analysis for aspirin/NSAIDs use and GC. In addition, it is still unclear that the optimal regiment for GC prevention.

In the present study, we performed an update systematic review of existing studies to explore the association between aspirin/NSAID intake and GC risk and a better benefit regiment for GC risk reduction.

We aimed to conduct a systematic review (according to PRISMA statement) identify association between anti-inflammatory drug exposure and risk of gastric cancer. A literature search was performed in the databases of Medline (PubMed), Web of Science, Embase, OVID, Cochrane Library and Clincialtrials.gov before August 31, 2015 for related publications, using the following key words: (“aspirin” or “NSAIDs” or “non-steroidal” or “anti-inflammatory” or “cyclooxygenase inhibitors” or “COX”) combined with (“gastric cancer” or “stomach cancer” or “gastric adenocarcinoma” or “stomach adenocarcinoma” ) (for detail search terms see Supplementary Table S1).The retrieved articles were strictly examined to exclude duplicates or overlapping studies. In addition, reference lists of all retrieved articles and previous Meta-analyses were also checked for further eligible publications.

Eligibility of articles were assessed independently by two reviewers (P. F. Kong and J. J. Liu). Our inclusion criteria for article were as follows: (1) exposure to any type of anti-inflammatory drugs; (2) measured the occurrence of gastric cancer; (3) randomized clinical trials (RCTs), cohort studies, or case-control studies; and (4) the odds ratios (OR) or relative risks (RR) and corresponding 95 % confidence intervals (CIs) were provided directly or calculated indirectly. In addition, reference lists of all retrieved articles and previous systematic reviews were checked for further qualified publications. For the multiple articles from the same population or data sets, only the most detailed or recent information were extracted. If necessary, authors were contacted for the detail or additional unpublished data. Animal studies, review articles, case reports, editorials, commentaries, and duplicate studies were excluded. The entire process of study selection is summarized in Figure 1.

Our meta-analysis was conducted to assess the efficacy of pre-diagnosis aspirin usage on incidence of GC. For observational study, we used the PRISMA guidelines for meta-analysis on data extraction, analysis, and reporting. Heterogeneity between individual studies was quantified by χ2 test and I2 test, respectively. p<0.05 and/or I2>50% suggests significant heterogeneity [30]. Summary RRs (HRs) and 95% CI were calculated using a random-effects model for I2>50%, and a fixed-effects model was applied when the heterogeneity was not significant. The Galbraith plots was used to visualize the impact of individual studies on the overall homogeneity test statistic [31]. Subgroup analyses were further conducted according to study designs (case-control, cohort or RCT), sample sources (population-based or hospital-based), geographical region (North America, Europe, and Asia), sites of cancer (cardia or non-cardia), exposure type (aspirin, celecoxib, acetaminophen, COX-2 inhibitors, and other NSAIDs), use at reference date (former and current), study quality (high and low), publication year (≤2000 and >2000), sample size (≤1000 and >1000), frequency, duration, dose effects (<200mg, 200 to 750 mg, >750mg), and adjustments for covariates, so as to investigate the deprive of heterogeneity. Sensitivity and subgroup analyses were used to dissect the heterogeneity. As described previously, to evaluate the publication bias risk, funnel plots were evaluated. Two-sided p values were calculated, with a p value <0.05 considered significant for all tests. All analyses were performed using the Stata software (V.19.0; Stata Corp, College Station, Texas, USA) [32]. 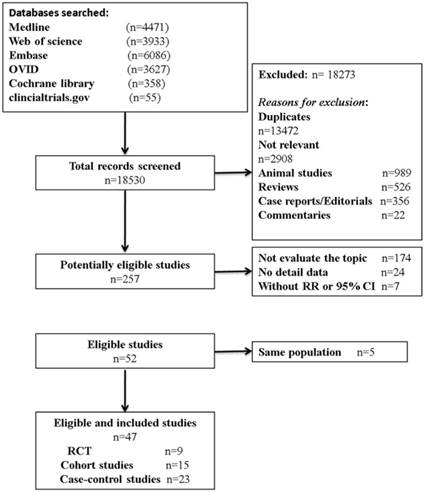 A pooled analysis was conducted on all 47 studies. The multivariable-adjusted RRs for each study and the combined RR for anti-inflammatory drug intake and the risk of GC are presented in Figure 2. Among all studies, 42 showed an inverse association between the anti-inflammatory drug and GC risk, 14 of which were statistically significant. Overall, the pooled analysis represented a summary RR of 0.78 (95% CI 0.71 to 0.85) with significant heterogeneity (I2=78.7%, p<0.0001).

Frequency and duration of anti-inflammatory drug use

Forest plot of anti-inflammatory drug intake and risk of gastric cancer (ever use vs, nonuse). (A) Overall and (B) adjust for study quality. The pooled relative risk was achieved using random-effects model (I2>50%) and fix-effects model (I2≤50%). Grey square represents relative risk in each study, with square size reflecting the study-specific weight and the 95% CI represented by horizontal bars. Squares or diamonds to the left of the solid vertical line indicate benefit with anti-inflammatory drug intake. 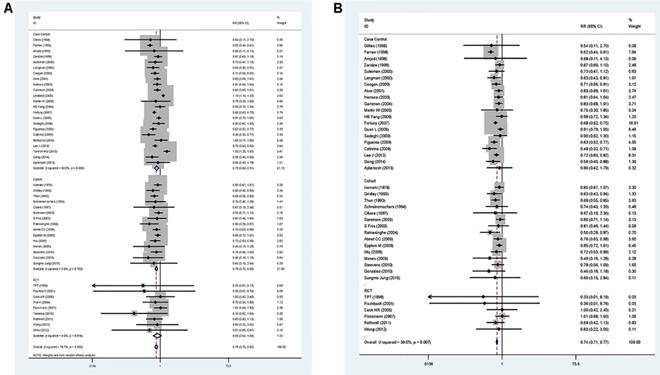 Forest plot of different dose aspirin intake and risk of gastric cancer. The pooled relative risk was achieved using fix-effects model. Grey square represents relative risk in each study, with square size reflecting the study-specific weight and the 95% CI represented by horizontal bars. Squares or diamonds to the left of the solid vertical line indicate benefit with aspirin intake. 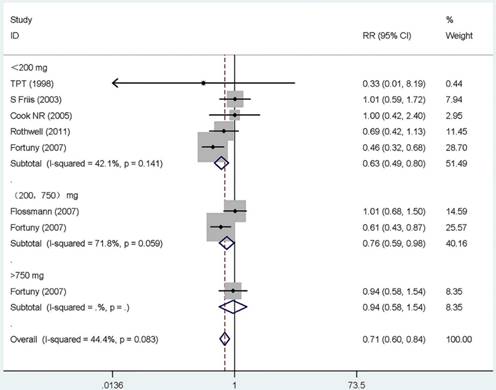 Studies were stratified by geographic area, The RRs were 0.71 (95% CI, 0.64-0.79) for studies conducted in North America, 0.83 (95% CI, 0.72-0.96) for studies in Europe. These results indicate a significant inverse association between anti-inflammatory intake and GC risk (Supplementary Table S7).

Sensitivity analyses and evaluation of heterogeneity

Meta-regression analysis demonstrated that geographic area (P=0.10), study quality (P<0.001), and publication year of study (P=0.09) were significant sources of heterogeneity, but the outcomes indicate that study design, drug type, and study size were not the main origin of heterogeneity. Geographic area alone explained 10.12% of the τ2 in the meta-regression analyses, study quality explained 61.75% of the τ2 and publication year explained 5.44% (Supplementary Table S8).

The funnel plot did not show any notable asymmetry (Supplementary Figure S2). No publication bias was detected using the Begg's test (P = 0.551) and Egger's test (P = 0.070).

In this meta-analysis, data were available for more than 2.3 million individuals and more than 13,000 GC events. Our study has found several unexpected findings with important clinical implications.

Second, our data also suggest that COX-2 inhibitors use is a more effective approach to reduce GC risk, which may have an important clinical usage for the treatment of GC and certain diseases. Above all, we clearly showed that COX-2 inhibitors intake with an encouraging significance 55% reduction in the risk of GC compare with 22% in total anti-inflammatory drug. Next, in other subgroup analysis, the pooled RR of three celecoxib studies involved also supported a result (RR: 0.49, 95% CI: 0.30-0.81), similar to COX-2 inhibitor intake does. Further, in the frequency and duration analysis, we found

Third, the largest synthesis so far to our knowledge in the present study highlight that intake of NSAIDs intensely reduce the risk of GC. The protective rate can reach 22% after excluding the publication biases and using the adjusted dataset, but with a large between-study heterogeneity (P<0.0001, I2= 78.7%). Indeed, after we kicked out six studies with relative low quality [25, 29, 38, 48, 51, 59, 61], the heterogeneity dramatically decline to 39.0% (P=0.007, I2= 39.0%) and the reduction of GC risk still significant (RR, 0.74; 95% CI, 0.71-0.77.). Hence, the main source of heterogeneity may in view of the fact that the relative low quality studies enrolled in the meta-analysis. Previously, several meta-analyses have found aspirin or NSAIDs use inversely associated with GC risk [16-18, 20], but we still have a problem that all those studies were short of statistic power and recently data. For example, the largest scale study were generally enrolled twenty-one qualified studies range from1968 to 2003 and the summary RR was also with a high heterogeneity (I2= 59.8%). In our study, we searched a multitude of online dataset and eventually forty-seven studies were included in our analysis, among of which nineteen new studies were never covered in the previous meta-analyses [19, 22-29, 38, 39, 44, 49-51, 53, 56, 58-60]. Nevertheless, since the deficiency of randomized clinical trials, the strength of this study was impaired for drawbacks associated with an army of observational investigations.

In conclusion, unlike early studies, this meta-analysis is a more comprehensive and better designed study which conducted in both RCTs and observational studies and deeply discuss the most optimal regiment of anti-inflammatory drug exposure for GC risk reduction. It demonstrates clearly that short or middle-term (≤5 years), high-frequency (>30 times per month) and low dose (<200 mg per day) anti-inflammatory drug use is associated with a statistically significant reduction in the risk of GC. In addition, our data also strongly suggest that COX-2 inhibitors use is a more effective approach to reduce GC risk. However, because of potential bias and confounding factors, these results should be treated with caution. As a consequence, more and better-designed high relevant large clinical trials is an urgent need in the future.

This study was supported by grants from Natural Science Foundation of Guangdong, China (No. 2015A030313010), Science and Technology Program of Guangzhou, China (No. 1563000305) and National Natural Science Foundation of China (No. 81272641and No. 81572409). The authors thank Dr. Yixin Zhou for statistical advising and review of the manuscript and Xuan Lee, and Min Ma for review of the manuscript.

30. Stang A. Critical evaluation of the Newcastle-Ottawa scale for the assessment of the quality of nonrandomized studies in meta-analyses. European journal of epidemiology. 2010;25:603-5