Background: Small bowel adenocarcinoma (SBA) is associated with a poor prognosis. It is an uncommon malignancy and therefore difficult to study. Randomized phase III trials are not available to guide best approaches. The Provincial Cancer Registry of the British Columbia Cancer Agency contains long-term data on patients with SBA. The authors analyzed characteristics and treatment outcomes for SBA patients diagnosed between 1990 and 2008.

Material and methods: Charts of 150 patients with a histological diagnosis of SBA were retrospectively analyzed. Epidemiological and treatment data were collected. Disease-free survival (DFS) and overall survival (OS) were estimated by the Kaplan-Meier method.

Conclusions: Our study suggests a survival benefit for advanced-stage SBA patients treated with poly- versus monochemotherapy. This, however, was a retrospective analysis with several potential confounders. Nevertheless, our study adds to the evidence suggesting that chemotherapy may be beneficial for patients with SBA, at least in the palliative setting.

The small intestine is 5 to 7 m long and represents 75% of the length of the entire gastrointestinal tract. However, the incidence rate of small intestinal neoplasms is approximately 11-fold lower than that of colorectal cancer [1]. Speculation on the reasons for this discrepancy are ongoing; short exposure time between mucosa and potential carcinogens, dilution of carcinogens by secretions, and absence of bacterial degradation of bile salts in the small intestine are some of the potential explanations [2].

Unfortunately, as with most upper gastrointestinal tract tumors, the prognosis of SBA is poor. The overall survival of patients with metastatic disease is 9 to 11 months [4, 5]. Due to the rarity of SBA, there are no robust data in the literature to guide treatment decisions in these patients. In that light, we retrospectively analyzed epidemiological data, risk factors and outcomes of patients in British Columbia who were diagnosed with SBA between 1990 and 2008, to determine whether any strong patterns had emerged from two decades of provincial experience.

After approval of this project by University of British Columbia (UBC) British Columbia Cancer Agency (BCCA) Research Ethics Board patients with SBA were identified using the Provincial Cancer Registry of BCCA. This database contains data on patients treated at the BCCA's Vancouver, Fraser Valley, Vancouver Island, Southern Interior and Abbotsford centers. Only patients given a histological diagnosis of SBA between 1990 and 2008 were included in our study, to achieve adequate follow-up details for all included patients. Individual patient charts were reviewed and data recorded.

Using the above described search criteria the Provincial Cancer Registry identified 189 patients. Basic data such as sex, age at diagnosis of SBA, and tumor location were available on 150 patients; data with respect to treatment benefit were available for 147 patients.

The median age at diagnosis was 64.5 years (range 24.5 to 92 years) (Table 1). Slightly more than half of the patients were male (58%). The most common primary tumor site was duodenum (48%), followed by jejunum (31%) and ileum (21%). 58% of patients had locally-advanced (stage III) or metastatic (stage IV) disease at diagnosis, whereas 33% had stage I or II disease at presentation. Stage could not be determined for 9% of patients.

Baseline characteristics of patients with small bowel adenocarcinoma diagnosed between 1990 and 2008 in British Columbia.

Histologically, 47% of patients had moderately-differentiated, while 29% and 7% had poorly- or well-differentiated adenocarcinoma (tumor grading was not available for 17% of patients). Patients with metastatic disease at diagnosis most commonly had peritoneal (45%) or hepatic (42%) metastases, followed by distant nodal spread (29%). Some patients had multiple metastatic sites.

Almost 90% of SBA patients reviewed presented with abdominal discomfort, symptoms of obstruction (typically nausea and/or vomiting), or gastrointestinal bleeding (Supplementary Material S2). Abdominal discomfort was the most common symptom (33%), followed by obstruction (27%) and gastrointestinal bleeding / chronic iron deficiency (26%). Jaundice was the leading symptom at diagnosis in 2% of patients. 12% of patients were either asymptomatic at diagnosis or presented with symptoms other than those described above.

Chemotherapy in the adjuvant setting

Chemotherapy in the palliative setting

The primary purpose of this review was to obtain more current data about SBA with regard to epidemiology, risk factors, prognosis and chemotherapy efficacy. The records of 150 patients diagnosed with SBA between 1990 and 2008 in British Columba, Canada were individually reviewed. 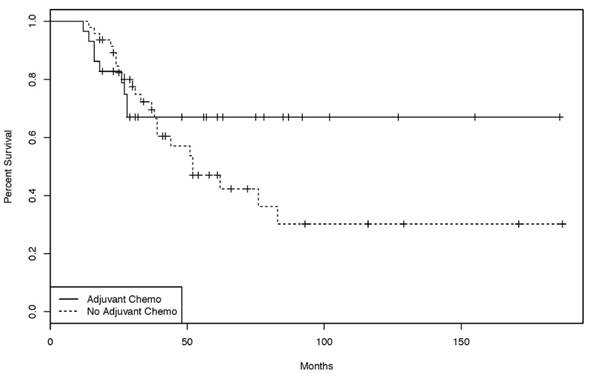 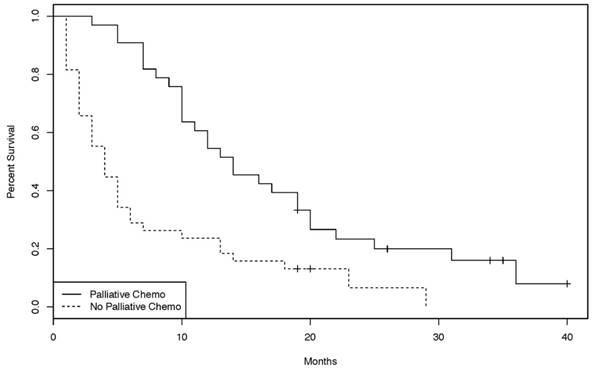 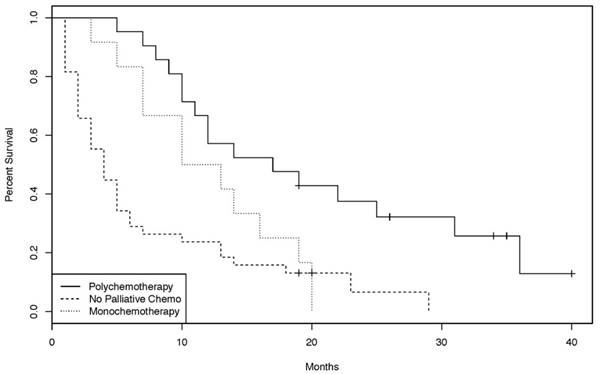 There are many epidemiological studies on patients with SBA in the published literature [3, 4, 5 among others]. Though our current study involved relatively few patients, the data were consistent with published literature. For example, the current study identified a slight male predominance (58% in our study versus 54% in the literature), similar median age at diagnosis (64.5 versus 67 years) and similar distribution of primary tumor site of origin. In about half of patients, the primary tumor was located in the duodenum (48% versus 56% in the literature [3]), followed by jejunum (31%) and ileum (21%). With respect to prognosis our data were also very consistent with the literature; the median survival of 22 months compares favorably to the median survival of approximately 20 months described in other published sources [4].

The pathogenesis of SBA is not yet fully understood. The literature describes genetic factors (such as familial adenomatous polyposis (FAP), hereditary non-polyposis colorectal cancer (HNPCC), Peutz-Jeghers Syndrome); environmental factors (such as tobacco, alcohol use, and a diet high in red meat); and predisposing medical conditions (such as Crohn's or celiac disease) [7]. 55% of our patients had a first-degree relative with a history of cancer and Lynch Syndrome (Amsterdam II criteria) and Peutz-Jeghers Syndrome were identified in 6% and 1% respectively. These data support the hypothesis that genetic predisposition in general and Lynch syndrome in particular may play an important role in the development of SBA [8, 9]. Crohn disease as a known predisposing medical condition was identified in 13% of our patients, with the highest proportion in the group of patients with ileal-primary SBA (41%). 72% of patients with Crohn's disease who developed SBA were found to have an ileal primary, consistent with findings in other published literature [10].

The management of patients with stage II and III disease remains challenging. Despite surgery with curative intent, the 3-year survival rate for patients with stage III SBA is only 45% [4]. Adjuvant chemotherapy, radiation or chemo-radiotherapy may be reasonable approaches to reducing recurrence risk. However, due to the rarity of this disease, there are no randomized, controlled, prospective trial data supporting any particular adjuvant strategy [11]. All studies dealing with this question are retrospective analyses and - with the exception of one recent large study [12] - none demonstrated an overall survival benefit for patients treated with adjuvant chemotherapy [5, 13-16]. Consistent with most of the published literature, the 29 patients treated with adjuvant chemotherapy in the present study did not have a statistically significant outcome improvement (either DFS or OS) over the 47 patients who did not receive further treatment (Supplementary Material S3 and Figure 1); however, there was a trend towards benefit (Figure 1).

In the palliative setting however, there is perhaps more evidence to suggest a benefit for chemotherapy (Figure 2). 33 patients underwent palliative chemotherapy and had a statistically significantly improvement in overall survival compared to untreated patients. Again, prognostic factors might not be well balanced between the two groups, but now favoring the chemotherapy group, who may have been more fit, or had lower disease burden, compared to the group which did not receive chemotherapy. According to the literature, ECOG performance status (0-1 versus 2) is one of the strongest prognostic factors in patients with SBA [16, 20]. Performance status scores could not be reliably obtained for patients in the present study; therefore, it is possible that apparent OS benefit is explained by uneven distribution of performance status, in addition to other potential patient or histological confounders. Nonetheless, the present study lends support to the hypothesis that palliative chemotherapy may benefit patients with advanced SBA.

If chemotherapy has a positive impact on outcomes in patients with incurable metastatic SBA, then which regimen is the most beneficial? Several phase II studies examining a variety of protocols with different OS have been published [21-25]. There are also retrospective single centre experiences comparing different regimens [5, 15, 16, 20, 26-30]. Current expert opinion favors use of a fluoropyrimidine-platinum combination in the first line [20, 26, 27]. However, definitive data for treatment selection are lacking.

In summary, this retrospective analysis of 150 patients with SBA represents a further contribution to the literature on this uncommon entity. Of particular interest are the findings concerning the role of chemotherapy in the management of patients with SBA. In the adjuvant setting, chemotherapy could potentially compensate for poor prognostic factors; however there was not a statistically significant benefit. In the palliative setting, patients treated with chemotherapy appeared to have a significantly longer OS than untreated patients. The data also suggest that combination chemotherapy is more effective than single-agent chemotherapy in the palliative setting. The high frequency of positive family history for other adenocarcinoma as well as the association of this rare condition with one of a small number of genetic or heritable syndromes raise hope that, in this era of molecular discovery, targeted therapy approaches may offer a way forward. One promising approach might be PD1-blockade in patients whose tumors demonstrate mismatch-repair deficiency [31]. Significant limitations of this study are its retrospective nature, lack of consistently available data across all data fields, and modest numbers. The results are best interpreted in the context of the body of literature on SBA as a whole, and may be useful in further hypothesis generation.

The authors have declared no conflicts of interest and no financial disclosures.