Methods: Total of 253 TNBC patients from Sun Yat-sen University Cancer Center who underwent treatment between January 2004 and December 2009 was conducted in this retrospective study. Before treatment serum ALP and LDH levels were routinely measured. We use the receiver operating characteristic (ROC) curve analysis to estimate the cutoff value of serum ALP and LDH levels. The Kaplan-Meier method and multivariable Cox regression analysis were used for Disease free survival (DFS) and overall survival (OS) assessed.

Results: The ROC curves determined that the optimum cutoff point for ALP and LDH were 66.5u/L and 160.5u/L, respectively. The elevated ALP and LDH were both significantly associated with decreased DFS and OS (both P < 0.001). In addition, the entire cohort was stratified into three subgroups basis of ALP levels and LDH levels. TNBC Patients who with ALP >66.5 u/L and LDH >160.5u/L had the worst DFS and OS (both P < 0.001). In TNBC patients, univariate and multivariate Cox regression analyses conformed ALP and LDH were independent unfavorable prognostic factors for DFS and OS.

Conclusions: The serum levels of ALP and LDH before treatment are independent prognostic parameters and may serve as complement to help predict survival in TNBC.

Cancer is an increasingly global problem and breast cancer is the main cause of cancer death in women worldwide[1, 2]. It is generally known that breast cancer has various genetic alterations and it to be classified into different molecular subtypes. As a refractory subtype of breast cancer, Triple negative breast cancer (TNBC) is a heterogeneous clinicopathological cancer and shows high recurrence rate and poor prognosis[3]. About 15% to 20% breast cancer patients are TNBC[4]. It has attracted increasing clinical and basic scientific research attention on the prognostic factors for patients with TNBC.

A valuable prognostic factor should be accurate and reproducible, but also easily performed. In recent years, many studies focus on blood parameters and serum parameters that may be prognostic parameters in cancer. An increasing body of evidence has confirmed the utility of blood parameters and serum parameters in predicting TNBC patient prognosis. For example, increased pre-treatment neutrophil to lymphocyte ratio (NLR) may be associated with poor prognosis in early TNBC patients [5]. The high fibrinogen level before operative was a risk factor for triple negative breast cancer and some other breast cancer subtypes. [6]. Here, we concern about two routinely tested serums biochemical index alkaline phosphatase (ALP) and lactate dehydrogenase (LDH). ALP is a hydrolase enzyme which responsible for removing phosphate groups. LDH plays a vital role in the conversion of pyruvate to lactate. Both of them are serum enzymes, which have been found to have prognostic value in several malignancies. According to previously studies, in some kinds of cancer, the elevation of ALP or LDH might indicate a heavy tumor burden and tumor metastasis. High ALP level was reported to be related with worse prognosis in colorectal cancer [7], nasopharyngeal carcinoma [8], prostate cancer[9], and esophageal squamous cell carcinoma[10]. Serum LDH level was demonstrated to be a prognostic factor in nasopharyngeal carcinoma[11], lymphoma[12], small cell lung cancer[13], myeloma[14] and prostate cancer[15]. However, the prognosis value of serum ALP and LDH in TNBC has remained unclear.

In this retrospectively study, we evaluated serum ALP and serum LDH levels in 253 TNBC patients, and correlated the levels of ALP and LDH to the outcomes of the TNBC patients.

This study was conducted female patients who with histological diagnosed of triple-negative breast cancer between January 1, 2004 and December 31, 2009 in Sun Yat-sen University Cancer Center (SYSUCC). TNBC was defined as breast cancer with negative expression of Estrogen receptor (ER-), progesterone receptor (PR-), and human epidermal growth factor receptor 2 (HER-2-). ER, PR, and HER-2 analyses were performed via immunohistochemistry (IHC). ER- or PR- was defined as less than 1% of positive ER or PR expression cells. Because lacking of fluorescence in situ hybridization data, HER-2 immunohistochemical scores of 0/1+ were including as HER-2 negative. A Patient was excluded from the study: 1) without follow-up; 2) with previous or coexisting cancers; 3) Declined treatment; 4) with active infections; 5) with liver disease or heart disease; 6) without available data of ALP and LDH before treatment. All patients were followed up to November 27, 2015 or until death. Sun Yat-sen University Cancer Center Institute Research Ethics Committee approved this retrospective study, and all enrolled patients had written informed consent. The methods were in accordance with the approved guidelines.

Before patients received prior treatment, baseline serum ALP and LDH had been routinely determined by Hitachi Automatic Analyzer 7600-020 (Hitachi, Tokyo, Japan). Clinical and histopathological data were collected through database chart review. Disease staging were determined according to the American Joint Committee on Cancer (AJCC) 7th Edition by TNM staging system. Patients were followed up by the Follow-up Department through outpatient medical records or telephone.

A P value of <0.05 was considered statistically significant. SPSS for Windows version 20.0 (SPSS, Chicago, IL, USA) was used to analyze all of the statistical data. Optimal cutoff values for the ALP and LDH were calculated by applying receiver operating curve (ROC) analysis. Univariate analyses with the Chi-squared test or Fisher's exact test were performed to investigate the associations of ALP or LDH level with clinicopathologic variables. Overall survival (OS) and Disease-free survival (DFS) were calculated from the initial treatment. Survival curves were calculated by the Kaplan-Meier and compared with the log-rank test. Univariate and multivariate analyses (Cox proportional hazards regression model) examined prognostic factors. Variables which P<0.05 in the univariate analysis were entered into the multivariate analysis.

The flow chart of patient selection. 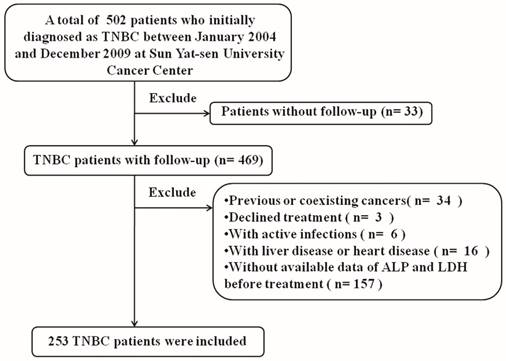 Relationships between ALP or LDH and other clinical characteristics

Correlations between pre-treatment serum ALP or LDH level and clinicopathological parameters are shown in Table 1. An obvious difference between ALP -high group and ALP -low group in the age, menstrual status (both P < 0.001) and lymph node (LN) Infiltrated (P = 0.001); No significant difference in the Body Mass Index (BMI), tumor size, tumor status, TNM staging, LN Infiltrated and histological grade (P > 0.05). At the same time, we found that a higher level of LDH was related to the age, menstrual status (both P < 0.001), BMI (P =0.007) and LN Infiltrated (P = 0.001). No correlation was observed between LDH level and other clinical characteristics (P > 0.05).

Prognostic significance of ALP and LDH in TNBC

TNBC is a diverse and heterogeneous group of breast cancer simply defined by the absence of ER, PR and HER2 amplification[16]. Besides the TNM stage, tremendous studies have been carried out on identifying reliable prognostic factors in TNBC. In recent years, some studies have demonstrated the prognostic value of blood parameters and serum parameters, which are inexpensive, accurate, identified by easy method of detection and validated. Although underlying mechanism is unclear, increased pretreatment blood parameters and serum parameters have been confirmed to associate with prognosis of several cancers, such as neutrophil-to-lymphocyte ratio (NLR)[17, 18], lymphocyte-to-monocyte ratio (LMR), monocyte count[19], platelet-to-lymphocyte ratio (PLR)[20], fibrinogen[21] haptoglobin [22]and C-reactive protein[23]. The serum levels of ALP and LDH are routine diagnostic tests in clinical laboratories. In this paper, we focus on the pre-treatment serum ALP and LDH levels and explore the prognostic value of them in TNBC patients. 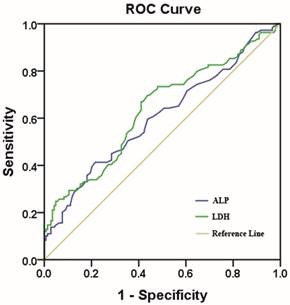 Correlation between the clinicopathological variables and ALP or LDH in triple negative breast cancer cases.

The DFS and OS of TNBC patients according to levels of ALP, LDH, and ALP&LDH. 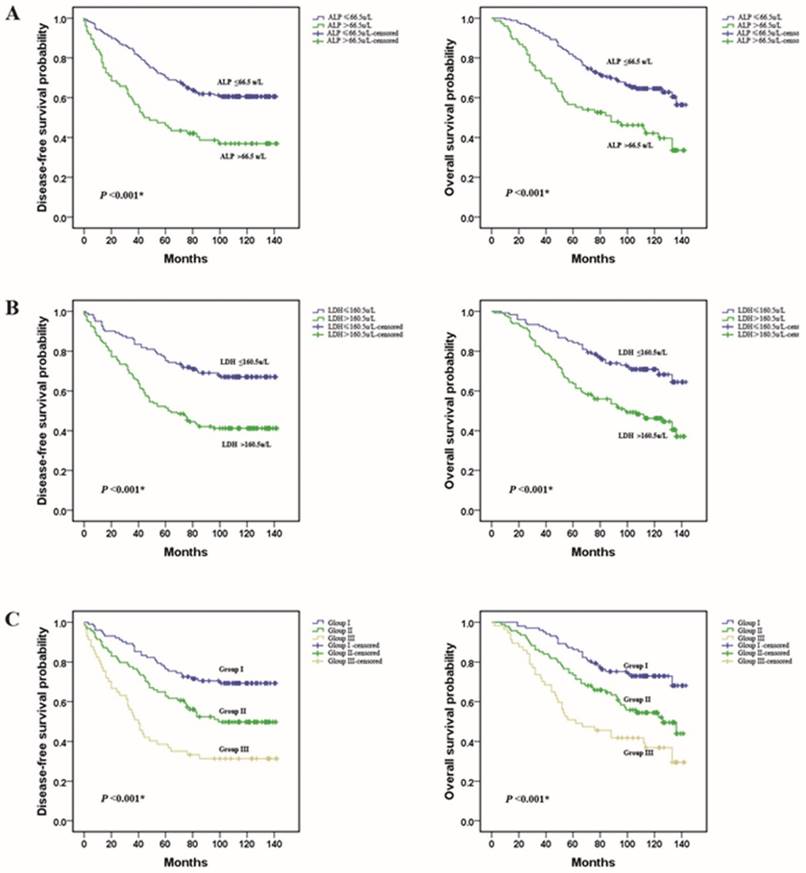 ALP is a nonspecific enzyme whose total serum levels reflect the combined activity of several isoenzymes found in the liver, kidney, intestinal lining and bone[24]. An electron microscopic cytochemistry study showed that in nucleolar localization ALP could indicate proliferation [25]. During the cell cycle, in the nucleolus of cancer cells, ALP activity higher and changes in localization [26]. Von Hoof et al. [27] and Steiber et al.[28] found that in non-metastatic breast cancer there are no significant differences in ALP levels. However, others have found a significant rise in ALP in metastasis [29]. Recent small-scale studies suggested that a significant increase in serum ALP was observed in breast cancer patients [30, 31] and it has consistently been shown to predict liver metastases[32] and bone metastases[33, 34].

It was widely recognized that a shift to aerobic glycolysis is a hallmark of most cancer cells[35]. LDH is a metabolic enzyme which catalyzes the interconversion of pyruvate and lactate. LDH level is increased during some important pathological process such as tissue injury, hypoxia and necrosis. In addition, various cancer cells express a higher LDH level than normal cells and the elevation of LDH might influent the tumor metabolism and microenvironment which may promote tumor progression [36]. Thus, the potential role of LDH as a prognostic biomarker in oncology has long been recognized [35, 37, 38]. A higher level of LDH is significantly associated with poor survival in terminal cancer patients which confirmed by several studies. [39, 40]. In bisphosphonate-treated breast cancer patients, an analysis demonstrated that LDH levels correlate with survival in patients with bone metastases [41].

In Previous researches, it was strongly indicated the valuable prognostic roles of ALP and LDH in cancer. However, little is known about the ALP and LDH prognostic value in TNBC patients. In the present study, we applied receiver operating curve (ROC) analysis to calculate optimal cutoff values for the pre-treatment serum ALP or LDH level. With the highest Youden's index, the cutoff values of ALP and LDH in the present study were 66.5 u/L and 160.5u/L, respectively. Then, through clinical pathological features analyzing, we discovered that both of ALP and LDH expression levels were related to the age, menstrual status and LN Infiltrated. Meanwhile, LDH also associated with BMI. In survive analysis, we examined the prognostic value of pre-treatment ALP and LDH to predict the long-term outcome of TNBC patients and found that ALP and LDH were independent predictors for DFS and OS. What's more, patients with ALP >66.5 u/L and LDH>160.5u/L had the worst DFS and OS. Univariate and multivariate regression analyses confirmed ALP levels and LDH levels were independent unfavorable prognostic factors for DFS and OS in TNBC patients. Synthesize the above results, this study currently represents the first one evaluating the prognostic value of pre-treatment ALP and LDH levels in TNBC patients.

We must acknowledge that there are several limitations in our analysis which connected to its retrospective design. First, the data were obtained from a single institution. In addition, there may have been a lack of uniformity because enrolled patients not received a unified treatment which may influence patients' survival. In recent studies, depending on the gene expression profile, TNBC can be classified into seven subtypes and the different subtypes are different sensitivities to treatment [42, 43]. Further prospective studies are therefore warranted to confirm these preliminary results and to investigate the correlations between TNBC subtypes and the serum levels of ALP and LDH.

In conclusion, our present study demonstrated that the pre-treatment serum ALP and LDH levels are independent prognostic factors for predicting the outcomes for TNBC patients. It may help clinicians to assess the risks of relapse and death in TNBC patients. In the future, the value and the most sensitive cut-off points of serum ALP and LDH required large clinical trials to determine.

No interest to disclose.

24. Harris H. The human alkaline phosphatases: what we know and what we don't know. Clinica chimica acta; international journal of clinical chemistry. 1990;186:133-50

38. Nieder C, Dalhaug A, Haukland E, Mannsaker B, Pawinski A. Tumor marker analyses in patients with brain metastases: patterns of practice and implications for survival prediction research. Tumour biology: the journal of the International Society for Oncodevelopmental Biology and Medicine. 2015;36:6471-6

41. Brown JE, Cook RJ, Lipton A, Coleman RE. Serum lactate dehydrogenase is prognostic for survival in patients with bone metastases from breast cancer: a retrospective analysis in bisphosphonate-treated patients. Clinical cancer research: an official journal of the American Association for Cancer Research. 2012;18:6348-55