Endometrial carcinoma (EC) is one of the most common gynecologic malignancy, but molecular mechanisms of the development and progression of EC remain unclear. Here we showed that the expression of DICER1 was negatively associated with the level of histone methylation, histone acetylation and PRC2 components SUZ12 and EZH2 in EC cells. In addition, knockdown of DICER1 significantly downregulated miR-200b and let-7i, which may then regulate their targets SUZ12 and EZH2. Furthermore, knockdown of DICER1 remarkably suppressed the expression of epithelial cell marker E-cadherin, induced the expression of mesenchymal cell marker Vimentin, and promoted the invasion of EC cells. In conclusion, our data suggest that DICER1 suppresses SUZ12 and EZH2 via affecting their upstream miRNA synthesis, and inhibits epithelial-mesenchymal transition(EMT) and invasion of EC cells via histone modification.

Endometrial carcinoma (EC) is the fourth most common cancer in the women worldwide [1,2]. Despite advances in cancer therapies, the incidence of endometrial carcinoma increases. In particular, the prognosis is poor for the patients with recurrent or advanced EC. Recent evidences indicate that epigenetic mechanisms are involved in the development and progression of cancer [3]. DNA methylation and histone modifications are important epigenetic modifications that could control gene expression [4]. There are at least eight patterns of histone modifications, including methylation and acetylation [5]. Histone methylation and acetylation are reversible and thus could modulate chromatin structure to impact gene expression [6,7]. Currently, global patterns of histone modifications are still unknown in EC [8]. SUZ12 and EZH2 are two histone H3K27 methyltransferases that mediate transcriptional repression [9].

MicroRNAs (miRNAs) are short non-coding RNAs that regulate the expression of almost 30% genes [10-12]. DICER1 regulates the processing of all endogenous small interference RNAs (siRNAs) and miRNAs. Down-regulation of DICER1 in breast cancer was related to miR-200/epithelial-mesenchymal transition (EMT) and cancer cell metastasis [13].

In this study we demonstrated that DICER1 suppressed SUZ12 and EZH2 expression by directly affecting their upstream miRNAs in EC cells. In addition, knockdown of DICER1 promoted EMT and invasion of EC cells via histone hypermethylation and acetylation.

AN3 CA and Ishikawa cell lines were provided from Cell Bank of Chinese Academy of Sciences (Shanghai, China), and cultured in Dulbecco's modified Eagle's medium (DMEM)/F12 supplemented with 10% fetal bovine serum (FBS) (Gibco, CA, USA), 100 U/mL penicillin, and 100 μg/mL streptomycin in a humidified atmosphere of 5% CO2 at 37°C. The plasmids encoding miR-200b and let-7i mimics or inhibitor and the control vectors, the plasmid encoding DICER1 siRNA (DICER1 siRNA) and the control vector (siRNA NC) were purchased from GenePharma (Shanghai, China). Cells were transiently transfected using Lipofectamine 2000 (Invitrogen, USA) according to the manufacturer's protocol.

The endometrial carcinoma tissue samples were collected from patients who received hysterectomy at our hospital from April 2008 to March 2010. The histological aspects of the samples were judged following the criteria of International Federation of Gynecology and Obstetrics (FIGO) [14].

5×104 cells were loaded into the chamber of a Matrigel Invasion Chamber (BD Biosciences) with an 8 μm pore size membrane. 48 h later the cells moved to the lower surface of the membrane were fixed by 100% methanol and stained with hematoxylin for cell counting.

PRC2 components are targets of DICER1

DICER1 is an important enzyme of the miRNA machinery and may be a tumor suppressor in endometrial carcinoma. In our past research, we have found the correlation between DICER1 level and clinico-pathological features of endometrial carcinomas and found that DICER1 expression was significantly higher in FIGO I-II stages than in FIGO III-IV stage[13].

Here we found that dysfunction of DICER1 downregulated the expression of endometrial carcinoma related miRNAs including miR-200b and let-7i, which act upstream to regulate SUZ12 and EZH2 expression.

Epigenetic factors such as DNA methylation, H3K4me3, H3K27me3 and H3/4 acetylation are key regulators of gene expression in tumorigenesis. PRC2 is composed of SUZ12, EED and EZH1/2 and regulates the di-methylation and tri-methylation of histone H3 at lysine 27 to mediate transcription repression. We found that dysregulation of DICER1 may affect the expression of SUZ12 and EZH2, therefore regulating histone methylation and acetylation. Furthermore, H3K27 and H3K4 hypermethylation could lead to aberrant activation of cancer-associated genes such as E-cadherin. 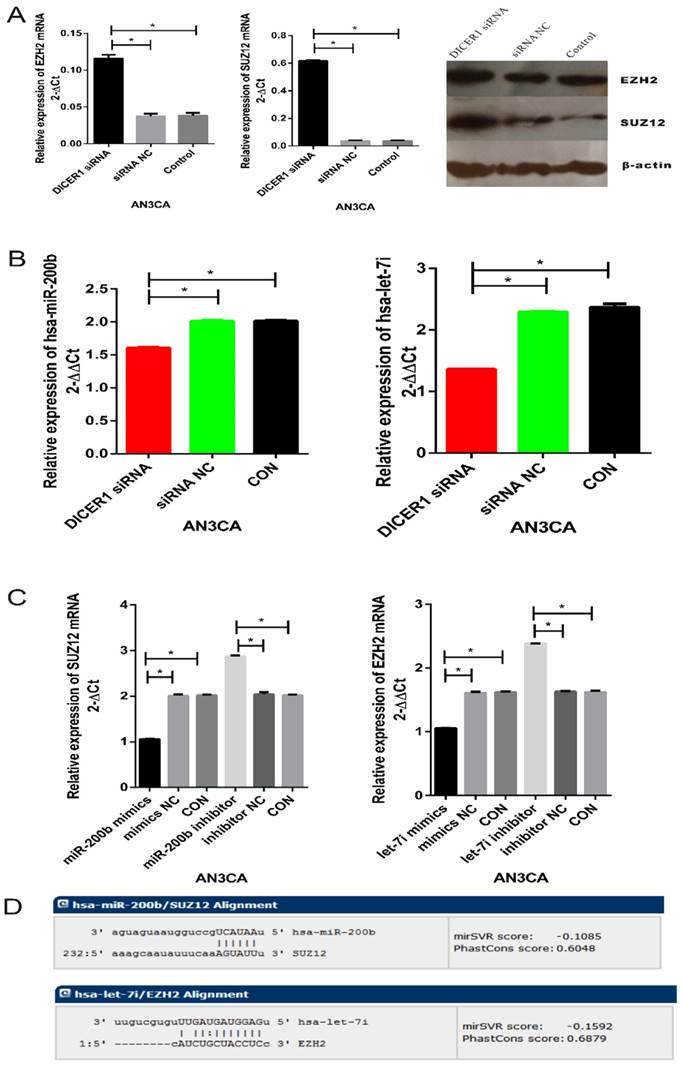 DICER1 suppresses EMT in EC cells. A. Representative photos of transwell assay for AN3 CA cells treated with DICER1 siRNA. B.qRT-PCR and Western blot analysis of E-cadherin and Vimentin expression levels in AN3 CA transfected with DICER1 siRNA and NC. C. Immunofluorescence microscopic analysis of the changes in the expression and localization of EMT markers. *P<0.05. 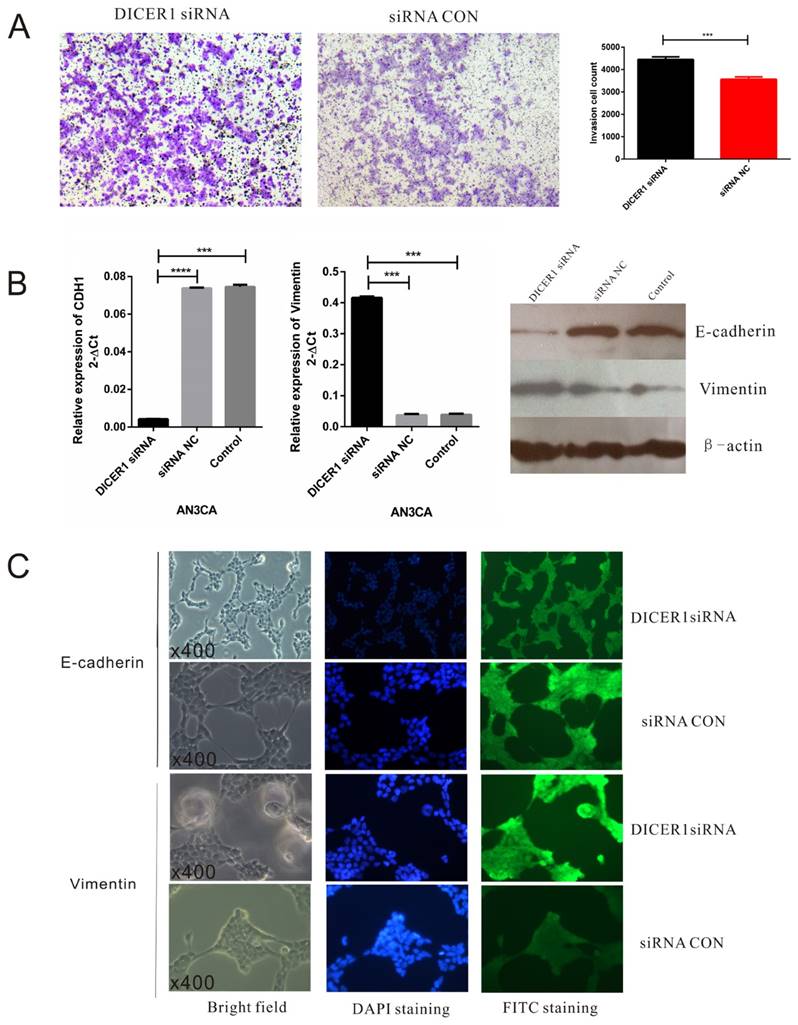 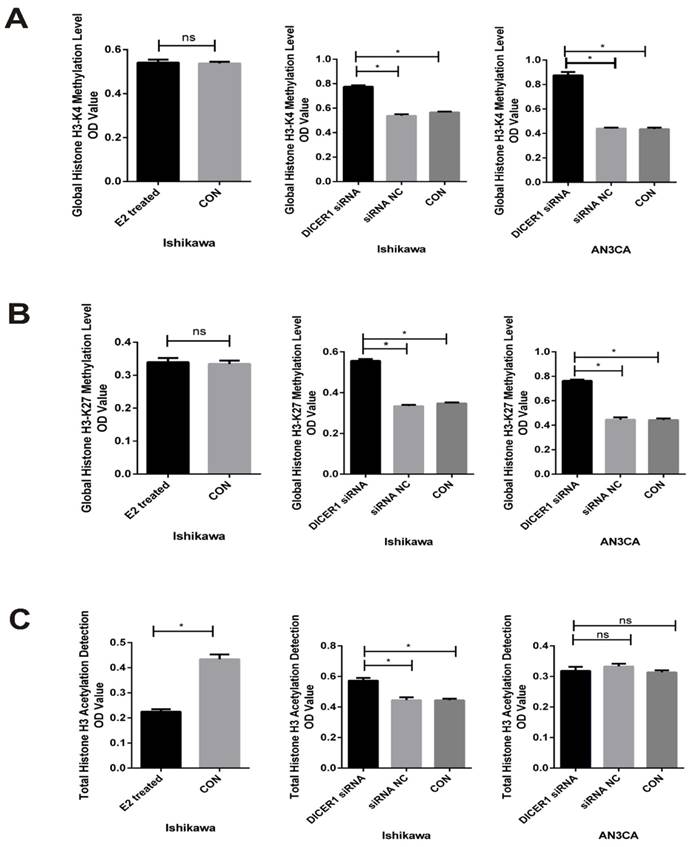 We found differential patterns of global H3K4me3, H3K27me3 and total histone H3 acetylation between endometrial carcinoma cells transfected with DICER1 siRNA and untreated cells. Interestingly, DNA methylation and histone modification could crosstalk due to the interaction between SET domain of histone methyltransferases and DNA methyltransferases [16]. In this study, we found that DICER1-dependent miRNA regulation leads to the changes in SUZ12 and EZH2 expression, which will then affect histone methylation levels. Thus we speculate that histone acetylation and DNA methylation form an epigenetic network to modulate the initiation and development of EC.

EMT is a multistage process that is required during embryonic development. However, increasing evidence suggests that EMT is often hijacked in various pathological conditions, such as tissue fibrosis and cancer metastasis [17,18]. We analyzed microRNA and EMT related signatures such as E-cadherin, vimentin, miR-200b and let-7i in EC cells. The results showed that DICER1 levels were correlated with the levels of E-cadherin, vimentin, miR-200b and let-7i. These data suggest that the regulation of SUZ12 and EZH2 to modulate the level of global H3K4/27 and total H3 acetylation is implicated in EC invasion and metastasis.

Notably, epigenetic changes such as DNA methylation and histone modifications have emerged as new hallmarks of cancer. Since epigenetic modifications modulate gene expression without straightly modifying genetic sequences, reversing DNA methylation or histone modifications has potential for cancer therapy. To our knowledge, this is the first study to report epigenetic regulation of histone methylation and acetylation in EC cells. We provided evidence that DICER regulated certain EC-related miRNAs to induce aberration expression of PRC2 components SUZ12 and EZH2, leading to altered gene expression and malignant features of EC cells. Interestingly, low DICER1 mRNA levels were reported to be correlated with disease recurrence and worse DFS survival in EC patients [19]. Therefore, DICER1 is a promising epigenetic target for EC treatment.

14. Creasman W. Revised FIGO staging for carcinoma of the endometrium. International Journal of Gynecology and Obstetrics. 2009;105:109