Purpose: The objective of this study was to confirm the association between pretreatment Epstein-Barr virus (EBV) DNA (pre-DNA) load and survival outcomes after long-term follow-up in patients with locoregionally advanced nasopharyngeal carcinoma (LA-NPC).

Materials and Methods: Between November 2009 and February 2012, a total of 1036 patients with LA-NPC were enrolled. There were 762 patients in stage III and 274 in stage IVA-B. All patients were treated with radical radiotherapy with or without chemotherapy, and pre-DNA concentrations were quantified by a polymerase chain reaction assay. Patient outcomes were evaluated.

Nasopharyngeal carcinoma (NPC) is endemic in South China and Southeast Asia, with an annual incidence of 15-50 cases per 100,000 [1]. As a result of anatomic constraints and its high degree of radiosensitivity, radiotherapy is the mainstay treatment modality for NPC. Recent advances in radiation technology and imaging techniques, the outcome for patients with early-stage disease is usually favorable; however, the outcome for locoregionally advanced NPC (LA-NPC, defined as an overall stage of III/IVA-B) is still unsatisfactory [2-3].

Currently, the extent of disease, as embodied by the TMN staging system, is the most important prognostic factor for NPC [4]. However, TNM staging system may not be precise enough to predict prognosis of NPC because patients with the same TNM stage and histological classification often have different prognoses. The limited power of TNM staging in determining individual patient outcomes highlights the need for better prognostic indicators for NPC.

Numerous attempts have been made to establish useful systems to predict the survival of NPC patients [5-6]. The circulating of pretreatment Epstein-Barr virus (EBV) DNA (pre-DNA) has been identified as a useful prognostic factor of individual tumor characteristics, facilitating the evaluation of disease development and treatment effectiveness [7-8]. On the basis of premise, we hypothesized that the combination of pre-DNA and TNM staging could improve the prognostic value of treatment outcomes for LA-NPC. To test this hypothesis, we replicated our prognostic analysis of pre-DNA in an independent cohort of 1036 patients with LA-NPC and further investigated the relation between pre-DNA levels and treatment outcomes in these patients after long-term follow-up.

We retrospectively reviewed the records of all NPC patients who were treated with intensity-modulated radiotherapy (IMRT) at the Cancer Center of Sun Yat-sen University (Guangzhou, People's Republic of China) between November 2009 and February 2012. The eligibility criterias were as follows: pathologically diagnosed non-keratinizing or undifferentiated carcinoma of the nasopharynx (World Health Organization [WHO] type II or III); age of 18-70 years; stage III-IVA-B disease according to the American Joint Committee on Cancer staging system (7th edition) [9]; no evidence of distant metastasis; Karnofsky performance score ≥70; receiving radical IMRT with or without chemotherapy as per the standard guidelines.

All patients underwent a pretreatment examination that included a complete medical history, physical examination, hematology and biochemistry profiles, magnetic resonance imaging (MRI) of the neck and nasopharynx, chest radiography, abdominal ultrasonography, and a whole body bone scan or positron emission tomography (PET)/CT. The scans were independently evaluated by two radiologists specializing in head and neck cancers and any disagreements were resolved by consensus. The ethic committee of Sun Yat-Sen University Cancer Center approved this study.

Peripheral venous blood (3 mL) was collected before treatment from each patient into EDTA-containing tubes and centrifuged at 3000 rpm for 5min. Plasma DNA was extracted and subjected to a real-time quantitative PCR assay as described previously [11]. A cutoff level of 1,500 copies/ml was chosen to define low and high EBV DNA levels because this threshold has previously been shown to be prognostic in previous NPC studies using the same measurement system [8, 11].

All analyses were performed using R3.1.2. Chi-square test or Fisher's exact test was used to compare the basic characteristics of the patients between two groups. Actuarial rates were calculated using the Kaplan-Meier method and differences were compared using the log-rank test. Univariate stratified survival analyses were performed with odds ratio (OR) and 95% confidence interval (CI). Cox proportional hazards models were used to assess the impact of independent prognostic factors in multivariate analyses. We then evaluated the combined association of pre-DNA and overall stage with patients' survival by dividing participants into different groups. Two-tailed P values <0.05 were considered statistically significant.

All of the patients were followed up to April 30, 2016. The median follow-up was 60.1 months (range: 1.3-79.5 months). Two hundred and thirty-seven patients had treatment failure, with 102 of them experiencing local-regional relapse, and 135 developing distant metastases, and 22 patients suffering both failure types. Of the 135 patients who had distant metastasis, liver is the most common metastasis site, about 53 patients finally developed liver metastasis, followed by bone (48 patients), lung (39 patients), and paraaortic lymph nodes (28 patients). Thirty patients had developed multi-organ metastasis.

a) According to the 7th American Joint Committee on Cancer/International Union Against Cancer staging system; 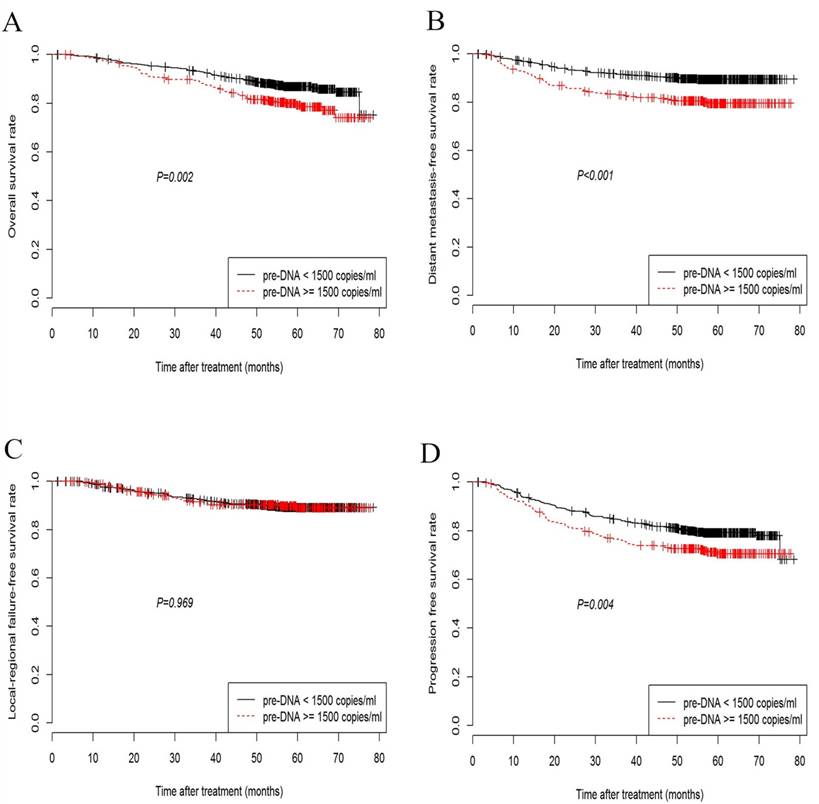 Combination of the pre-DNA and overall stage

Nowadays, TNM staging at initial presentation not only is important for reporting the extent of disease but also is crucial in determining the proper management strategy. However, according to recent studies, the TNM staging system is not satisfactorily accurate in terms of risk segregation and survival prediction [12]. Thus, it is necessary to integrate new biomarkers and diagnostic imaging assays to determine the risk segregation and survival prediction. Recent advances in cancer biology have helped develop many clinically useful biomarkers that can aid in grouping patients according to risk for those who have similar stage and can guide clinicians toward the optimal treatment for each patient. The goal of our study was to use pre-DNA and overall stage as outcome predictors to stratify the LA-NPC patients in improving outcome prediction. 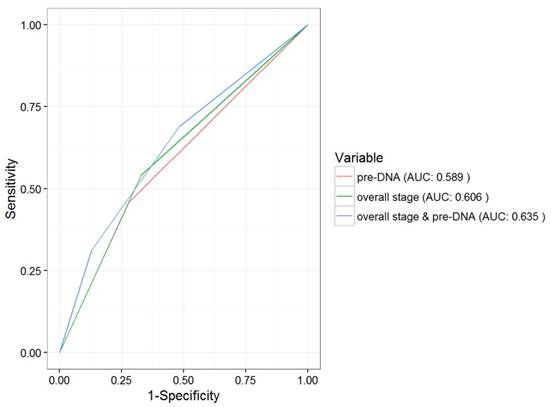 It is inspiring to see that pre-DNA and overall stage are two complementary factors for the stratification of patients with high risk for treatment failure. Based on the TNM stage and the level of pre-DNA, we identified groups at low, medium, and high risk of distant metastasis. Interestingly, patients with high levels of pre-DNA & stage III had a similar incidence of distant metastasis with patients diagnosed with stage IV NPC & low pre-DNA, suggesting that including pre-DNA levels as another parameter for evaluating tumor stage may help identify patients at higher risk for distant metastasis than would be suggested by their TNM stage alone. While the mechanistic link between high pre-DNA and distant metastasis is not clear, it may be inferred that higher levels of pre-DNA reflect more malignant cells in NPC.

Early identification of risk stratification may be critical for the choice of treatment strategy and will be useful in improving outcomes. Apparently, this analysis indicates that patients diagnosed with stage IV & high levels of pre-DNA most frequently experienced distant failure; therefore, this subgroup requires more intense treatment. Several studies [16-17] revealed a positive impact on survival of NACT combined with CCRT for patients with LA-NPC. It is possible that NACT followed by CCRT is not effective enough to eradicate micrometastases in this group of patients, therefore, the inclusion of adjuvant chemotherapy may be necessary. Secondly, the EBV viral antigens expressed by NPC tumor cells have become attractive targets for immunotherapy as another form of targeted therapy in this era of personalized management [18-19]. Adoptive immunotherapy is a potential avenue for patients in the high-risk group. Thirdly, the administration of an additional target agent, such as bevacizumab, is a known chimeric monoclonal antibody that targets vascular endothelial growth factor [20].

Lin et al [11] and Leung et al [21] reported that pre-DNA was a significant prognostic factor for LRFS, but we did not observe a relationship between pre-DNA and posttreatment relapse. The difference in the results may be reflect differences in the radiation techniques utilized in the different studies. For example, Peng et al [22] reported that the 5-year local-regional control rate was only 75% for patients treated with 2D-CRT. However, more recently Lin et al [23] and Xiao et al [24] reported that the 5-year local control rate exceeds 90% in patients with LA-NPC treated with IMRT. Additionally, the stronger benefit of chemotherapy in locoregional control and overall survival by enhancing the local effect of radiotherapy has been proven [25-26]. In our study, more than 90% of the patients received concurrent chemotherapy. The prognostic value of pre-DNA in LRFS may be diluted and narrowed due to the good locoregional control of concurrent chemotherapy. Thirdly, local relapse is also associated with gross tumor volume [27] and this study does not rule out the impact of gross tumor volume on local relapse. It is possible that high pre-DNA levels may place patients at higher risk of relapse than patients with similar a gross tumor volume and low pre-DNA levels.

Although this study has many clinical implications, we should be clear that it is a retrospective study with its own limitations. A major limitation of our study is that the plasma pre-DNA measurements are from a single center and the techniques for measuring plasma EBV DNA are not yet standardized across centers. Second, we lacked the date of posttreatment EBV DNA, future study need to continue to evaluate the prognostic value of posttreatment EBV DNA in the IMRT era.

In summary, we concluded that pre-DNA can be used to predict subsequent failure and patient survival based on the current analysis of our entire group of patients with long-term follow-up. Both pre-DNA and overall stage have significant prognostic impact in patients with LA-NPC. Several studies that included fewer patients also have produced similar results [28-29]. It may be inferred from our study that pre-DNA could be used in conjunction with traditional TNM staging before treatment to perform further risk stratification and early treatment modification.