Background: Interferon regulatory factor 4 (IRF4)/multiple myeloma oncogene-1 (MUM1) is a member of the interferon regulatory factor family of transcriptional factors. Although IRF4/MUM1 expression is associated with aggressiveness of B-cell lymphoma and multiple myeloma, the prognostic value of IRF4/MUM1 expression in peripheral T-cell lymphoma (PTCL) is unclear.

Methods: We analyzed a tissue array from 69 patients diagnosed with PTCL. The expression levels of IRF4/MUM1 and associated proteins such as MYC and Ikaros were analyzed by immunohistochemistry. Samples were classified by IRF4/MUM1 expression into a negative group (less than 5% of all tumor cells staining positive) or a positive group (≥ 5% of all tumor cells staining positive).

Results: IRF4/MUM1 expression was observed in 33% of all patients (23/69), most frequently in patients with anaplastic large cell lymphoma (ALCL, 78%, 7/9). Patients with PTCL, not otherwise specified (PTCL-NOS) and angioimmunoblastic T-cell lymphoma (AITL) showed expression rates of 33% (9/28) and 50% (4/8), respectively, whereas only 3 patients with extranodal NK/T-cell lymphoma (12%, 3/24) showed positive staining. The percentage of IRF4-positive tumor cells was significantly associated with the percentage of MYC-positive tumor cells (R: 0.410, P=0.013). Comparison of survival outcomes revealed that the IRF4/MUM1-positive group exhibited worse survival than the IRF4/MUM1-negative group; moreover, IRF4/MUM1-positive patients with a high level of MYC expression had the worst survival of all patients with nodal PTCL (PTCL-NOS, AITL, and ALCL; n=45) (P < 0.05).

Conclusions: IRF4/MUM1 expression was associated with poor survival outcomes in PTCL, implying that this gene is a potential therapeutic target.

Peripheral T-cell lymphomas (PTCLs) are aggressive non-Hodgkin lymphomas (NHLs) characterized by frequent relapse and poor survival outcomes [1]. Most patients with PTCL are still treated mainly with anthracycline-based chemotherapies such as CHOP (cyclophosphamide, doxorubicin, vincristine, and prednisone); however, their treatment outcomes are unsatisfactory compared to those of B-cell lymphomas [2, 3]. Thus, much attention has focused on identifying new therapeutic targets for the development of novel drugs, with the aim of improving PTCL treatment outcomes. Interferon regulatory factor 4 (IRF4), also known as multiple myeloma oncogene-1 (MUM1), has been suggested as a potential therapeutic target in PTCL due to its expression in T-cell lymphoma [4, 5]. IRF4 has been shown to have a crucial role in lymphoid malignancy [6] and is a well-known biomarker of activated B-cell like diffuse large B-cell lymphoma [7]. In multiple myeloma, upregulation of IRF4 along with its target gene MYC is known to contribute to cell proliferation and aggressiveness [8]. Moreover, IRF4 and MYC are targets of lenalidomide because it downregulates IRF4 and MYC via cereblon-dependent destruction of the upstream factor Ikaros [9, 10]. Likewise, lenalidomide has demonstrated clinical activity in relapsed/refractory disease as well as in untreated patients with PTCL [11-13]. Since IRF4 could be a target of other immunomodulatory drugs such as pomalidomide and CC-122, accurately assessing IRF4 expression is potentially important for the future use of novel immunomodulatory drugs in PTCL patients and predicting their treatment outcomes. However, few studies have investigated the clinical and prognostic values of IRF4 or those of its associated proteins (e.g., Ikaros and MYC) in PTCL. Therefore, we analyzed the expression of these proteins and their association with survival outcomes of patients with PTCL.

We analyzed the protein expression of IRF4, MYC, and Ikaros using a tissue array of samples from patients with PTCL. The tissue array was created using samples from 69 patients who were diagnosed with mature T-cell lymphoma at Samsung Medical Center between January 1994 and December 2004. All tissue samples were reviewed by immunohistochemistry and re-diagnosed according to the 2008 World Health Organization classification. Clinical information data were obtained retrospectively from electronic medical records. The clinical variables assessed were sex, age at diagnosis, PTCL subtype, serum lactate dehydrogenase (LDH) level, extent of extranodal involvement, bone marrow involvement, Ann Arbor stage, International Prognostic Index (IPI) score, and presence of B symptoms. Information collected about induction treatment was type of chemotherapy regimen and response. Final disease relapse and survival status data were recorded at the time of analysis in December 2015.

Immunohistochemistry analysis was performed to evaluate the expression of IRF4, MYC, and Ikaros family zinc finger proteins 1 and 3 (IKZF1, IKZF3). Representative 1-mm cores of each case, in duplicate, were taken from tissue blocks after review of slides. Immunohistochemical stains of 4 μm paraffin sections of the tissue microarray blocks were performed using a Bond Max automated immunostainer (Leica Biosystem, Melbourne, Austrailia) using antibodies for IRF4(MUM1p, 1/500; Dako), c-MYC (Y69, cat:ab32072, 1/100; Abcam, Burlingame CA USA,) and IKZF1(LS-C331729-50, 1:1000; LifeSpan BioSciences), IKZF3(LS-C339163, 1:1000; LifeSpan BioSciences). All stained specimens were independently reviewed by a single pathologist (K.Y.H.) without prior knowledge of clinical information. The numbers of positive cells were counted in duplicated cores and positive score was determined in 5% increments as the percentage of positive tumor cells. As the optimal cutoff value for IRF4 positivity was not defined, we designated positive expression as ≥ 5% of positive tumor cell, and the staining of less than 5% of all tumor cells as negative expression. The cutoff for positive expression of MYC protein in lymphoma was variable from 10% to 40% among previous studies, and the optimal cutoff was determined according to its statistical association with survival outcomes [14, 15]. Thus, we determined the cutoff for MYC protein expression considering its relation with survival, and defined low expression of MYC as staining of less than 15% of all tumor cells and high expression as staining of ≥ 15% of all tumor cells.

Associations of categorical variables were analyzed by the Chi-square test. For continuous variables, the bivariate correlation test with Spearman's rho was performed. For univariate analysis of survival outcomes, the Kaplan-Meier method was used; data were compared using the log-rank test. Overall survival (OS) was measured from the date of diagnosis to the date of death from any cause and was censored at the date of the last follow-up visit. Time to progression (TTP) was assessed from responders to induction chemotherapy and was calculated from the date of diagnosis to the date of disease progression, death from any cause, or the last follow-up. Variables with a p value < 0.05 were entered in the analysis, and 95% confidence intervals (CIs) were calculated. All statistical analyses were performed using PASW Statistics, version 23.0 (SPSS Inc., Chicago, IL, USA).

The clinical characteristics of the patients are summarized in Table 1. The median patient age was 54 years (range, 18-86 years), and 44 (63%) patients were male. More than 60% of patients had stage III/IV disease, and bone marrow involvement was found in 16 patients (23%). The subtype distribution was as follows: peripheral T-cell lymphoma, not otherwise specified (PTCL-NOS, n=28); extranodal NK/T-cell lymphoma (ENKTL, n=24); angioimmunoblastic T-cell lymphoma (AITL, n=8); and anaplastic large cell lymphoma (ALCL, n=9), including two patients with ALK+ALCL. The majority of patients (78%, 54/69) received CHOP or a CHOP-like regimen as an induction treatment, whereas six patients could not receive induction treatment because they died due to disease progression or combined infections. The overall response rate to induction chemotherapy was 49%, including complete response (24/63) and partial response (7/63). Responses were classified based on the International Working Group response criteria [16]. A total of 25 patients were refractory to induction chemotherapy, including patients with stable disease (2/63) and progressive disease (23/63). Two patients with ALK+ALCL received only one cycle of CHOP treatment: one patient died within two months due to infection and the other patient showed disease progression. Responses were not evaluated in seven patients due to the occurrence of complications such as infection and bleeding. At the time of analysis, the median OS was 12.8 months (95% CI: 5.8 - 19.8 months).

The percentages of IRF4-positive tumor cells ranged from 1% to 90% (Figure 1A). A total of 18 patients showed only IRF4 positivity in 1-3% of all tumor cells, while 24 patients did not show any positively stained cells. Thus, patients were dichotomized into an IRF4-negative or an IRF4-positive group, as follows: positive expression was defined as ≥ 5% of positive tumor cell staining, whereas staining of less than 5% of all tumor cells (including no expression) was classified as negative expression. According to this cut-off, 33% of all patients (23/69) exhibited positive IRF4 expression; these patients most frequently had ALCL (78%, 7/9), followed by PTCL-NOS (32%, 9/28) and AITL (50%, 4/8). Among two patients with ALK+ALCL, one patient was positive for IRF4/MUM1 whereas the other patient was negative. However, only three patients with ENKTL showed high expression of IRF4 (12%, 3/24). MYC expression was also evaluated in 57 patients from whom tissue was available for immunohistochemistry analysis. MYC expression was observed in 53 patients, while four patients showed negative expression (Figure 1B). The percentages of MYC-positive cells varied from 2% to 90%. Based on our cutoff value of 15%, patients were dichotomized into low expression (n=30) and high expression (n=27). In contrast, all cases were positive for IKZF1 and IKZF3, and more than 90% of all tumor cells were positive (Figures 1C, D). As a result, we could not dichotomize patients according to the positive expression of IKZF1 and IKZF3. 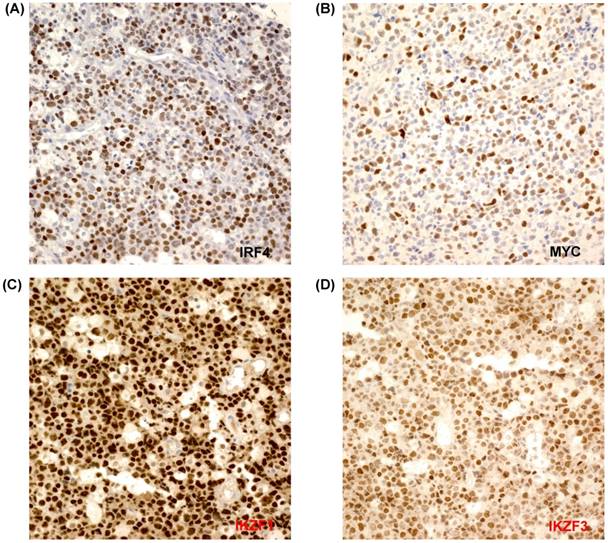 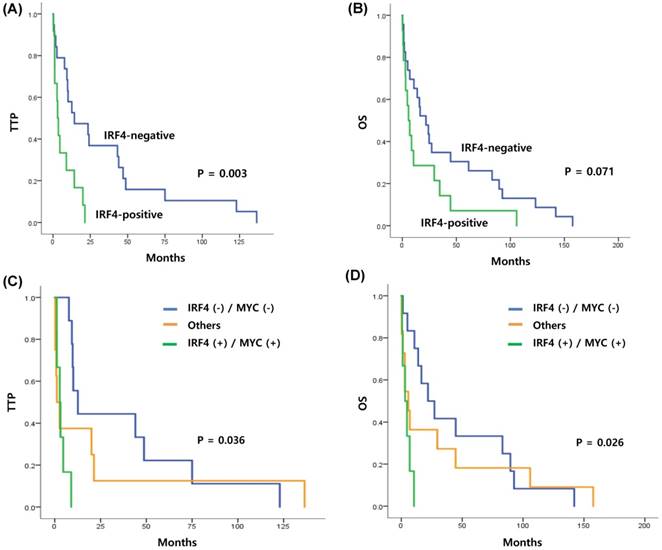 Recurrent translocations involving the 6p25 IRF4 locus have been suggested as the underlying mechanism driving IRF4 expression in PTCL [4]. However, fewer cases harbored this translocation than the number of total IRF4-positive cases, as assessed by immunohistochemistry. Therefore, nuclear factor κB (NF-κB), which is a candidate regulator of IRF4 expression, has been suggested as another mechanism driving IRF4 expression in PTCL [17]. In PTCL tumor cells, the NF-κB subunits p52 and RelB have been shown to be transcriptional activators of IRF4; moreover, CD30 activation was shown to promote p52 and RelB activity and subsequent IRF4 expression [17]. This positive feedback signal including IRF4, CD30, and NF-κB is consistent with the higher frequency of IRF4 expression in CD30-positive PTCL subtypes, such as ALCL. Two of the Ikaros proteins, IKZF1 and IKZF3, have been suggested as upstream proteins leading to IRF4 expression in NHL and multiple myeloma [18]. However, all cases in our study showed abundant expression of IKZF1 and IKZF3 (Figures 1C, D). Since 33% of all patients (23/69) were IRF4-positive by immunohistochemistry, our results suggest that IKZF1 and IKZF3 expression are not sufficient to drive IRF4 expression. Interestingly, constitutive expression of IRF4 driving MYC expression was shown to promote proliferation of PTCL cell lines [17]. Moreover, high expression of IRF4 and MYC in ALCL and their essential roles in survival of ALCL cells have been reported [19]. A close association of IRF4 with its direct transcriptional target MYC has mainly been reported in B-cell lymphoid malignancies, including multiple myeloma. Specifically, IRF4 binds directly to the MYC promoter region, thereby activating MYC expression in multiple myeloma cells; this activation leads to cell proliferation [8, 20]. Signaling cascades such as IRF4, MYC, and NF-κB are molecular targets of immunomodulatory drugs such as lenalidomide [21]. Lenalidomide is effective in the treatment of multiple myeloma, in which IRF4 is expressed, and occasional clinical responses have been reported in patients with PTCL [12, 13, 22, 23]. Accordingly, lenalidomide has shown efficacy in patients with relapsed or refractory PTCL. One phase II study with 23 evaluable patients showed an overall response rate (ORR) of 30% (all partial responses); the median OS was 7.9 months [23]. Thus, IRF4 is a potential therapeutic target that could also be a predictive factor of response to immunomodulatory drugs in PTCL.

Our study does have some limitations. First, relatively few patients were included, although we note that PTCL is an infrequent disorder. Thus, further studies with larger study populations should be performed to confirm the prognostic value of IRF4 in PTCL. Second, this was a retrospective study reviewing only patients who had tissue array samples available for immunohistochemistry. Thus, only 69 patients were selected from all the patients who were diagnosed and treated between 1994 and 2004. This limitation means that our study may have been vulnerable to selection bias. Lastly, although patients were uniformly treated with anthracycline-based induction chemotherapy at a single institute, the survival outcomes of patients were relatively poor compared to previously reported survival outcomes of PTCL [24, 25]. These poor outcomes could be related to the quality of supportive care, which may have differed from that associated with their current practice. However, despite these limitations, our study indicates that IRF4 expression is significantly associated with survival outcome. Thus, our findings suggest a potential role of IRF4 as a prognostic marker and therapeutic target in PTCL.

This study was supported by a grant from Samsung Medical Center (SMO1150931) and by a grant from the Basic Science Research Program through the National Research Foundation of Korea (NRF), which is funded by the Ministry of Education, Science, and Technology (2014R1A2A1A11049853).