Objective: To investigate the reversal effect of tuberostemonine on MDR in myelogenous leukemia cells K562/ADR.

Methods: Human myelogenous leukemia cells K562 and their adriamycin-resistance cells K562/ADR were used. The growth curve of cells treated by tuberostemonine and the Non-toxic concentration of tuberostemonine were determined by MTT, Cell apoptosis was determined by MTT and flow cytometry. The expression of MDR1, Survivin and Livin was detected by RT-PCR. The activity of P-gp was detected by flow cytometry. Western blot was used to detect the expression of NF-κB and Survivin.

MDR is one of the most important reasons for the failure of chemotherapy. Since the MDR was discovered in 1970 [1], it has been extensively studied by a multitude of medical investigators. The mechanism of MDR is extremely complicated for its multi-genes, multi-factors and multi-levels, it can be induced by different channels and one tumor cell may have different MDR mechanisms. The over expression of P-gp encoded by ABCB1 is the main cause of MDR and it almost exists in all malignant tumor cells. P-gp can reduce the drug concentration by pumping chemotherapy drugs out of cells, and it can also cause cross drug resistance [2, 3]. Survivin and Livin are important factors related to apoptosis of tumor cells. Their overexpression can directly lead to resistance of tumor cells to chemotherapy drugs and some researches showed they could indirectly cause MDR by affecting the expression of P-gp [4-7].

Therefore, it has become a hot topic to find suitable reversal agents to overcome the MDR. TCM is the potential MDR reversal agents with the properties of multi-components, multi-targets, multi-channels and little side effects [8, 9].

Stemona japonica is a stemona plant that distributes in Jiangxi, Zhejiang, Jiangsu, etc. China, its extracts are most alkaloids and all have extensively pharmacological activities. In recent years, the researches have also found the extracts have good anti-tumor activities, which could serve as a P-gp inhibitor. In 2007, the first report in the world by Limtrakul et al. showed that the stemona alkaloids had the inhibitory effect on P-gp [10]. The research by Chanmahasathien et al. [8] indicated the stemona alkaloids of temofoline, oxystemokerrine and stemocurtisine could enhance the sensitivity of cervical carcinoma cells to antitumor drugs in vitro and they published a research on the mechanism of modulation of P-gp by stemofoline, which stated that the stemofoline was an effective P-gp inhibitor [11]. The recent study by Lu et al. showed that the extracts of Stemona japonica could reverse the P-gp mediated MDR of breast cancer cells MCF-7/ADR [12]. Based on the reversing P-gp mediated MDR by stemona extracts in cervical carcinoma cells, our research used the stemona extract tuberostemonine to investigate its reversal effect on the chronic myelogenous leukemia cells K562/ADR.

The cells were seeded in the 96-well multiplates and 180μL about 3000 to 10000 cells each well, and cultured at 37℃in an atmosphere of 5% CO2 for 6h to 24h. 20μL different concentrations of adriamycin were added then cultured for 24h, 48 h and 72h, the supernatant was washed away afterward. 90μL RPMI-1650 and 10μL MTT (5mg/mL) were added and incubated again for 4h, the supernatant was washed away, then the 150μL DMSO was added each well, and shaken for 10min at a low speed and detected at 490nm wavelength. The drug-resistance of K562 and K562/ADR cells and the inhibition rate of tuberostemonine to the cells were both determined by the above method.

The MDR1 expression assay by RT-PCR

The groups were the same as above section, and the western blot was performed as previously described [13]. Briefly, the 500ng of total protein was loaded onto the SDS-PAGE gel and transferred to PVDF membranes. After blocking with 5% non-fat milk for 1h, membranes were then incubated with primary antibody overnight at 4℃, then the membranes were incubated with HRP-labeled secondary antibody for 1h at room temperature the next day. Immunoreactive proteins were detected using a chemiluminescence reagent by following the user manual. The primary antibody was anti-NF-κB (1:1000 dilution) the secondary antibody was sheep-anti-rabbit antibody with HRP-labeled (1:500 dilution), the GAPDH was selected as the loading control,

The Annexin V-FITC/PI double staining method was introduced to detect the cell apoptosis. The cells were collected after washed by PBS 2 times and centrifuged at 2000rpm for 5min. 500μL binding buffer was added to suspend cells, then mixed together with 5μL Annexin V-FITC and 5μL propidium iodide. The experiment was reacted for 5min to 15min at room temperature and dark place. The detection was carried by flow cytometry within 1h.

The expression of Survivin and Livin by RT-PCR

The expression of survivin by western blot

The experiment processes were the same as NF-κB detection by western blot. The molecular weight of Survivin was 20KD, the primary antibody was anti-Survivin (1:100 dilution) secondary antibody was sheep-anti-mouse with HRP-labeled (1:1000 dilution). The GAPDH was selected as loading control.

Each experiment was repeated at least 3 times. The data were presented as the mean ± SD. Differences between two groups were analyzed using t-tests, three groups were ANOVA and LSD-t-tests. Statistical significance was considered at p<0.05.

The drug-resistance properties of K562/ADR

The OD of different concentrations of adriamycin acting on K562 and K562/ADR is as follows (Figure 1).

The changes of optical density of different concentrations of adriamycin acting on K562 (Left) and K562/ADR (Right). The abscissa represents the logarithm of the concentration of Adriamycin.

The inhibitory effects of different concentrations of tuberostemonine to K562 and K562/ADR. 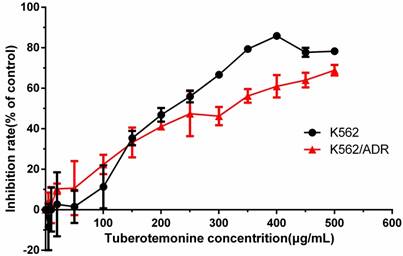 The expression of MDR1 and the activity of P-gp

The expression of NF-κB

The western blot result is as follows (Figure 5). It is apparently that the expression of NF-κB was inhibited by tuberostemonine, and the inhibitory effect to 105KD NF-κB of 300μg/mL and 500μg/mLwas better than 200μg/mL. 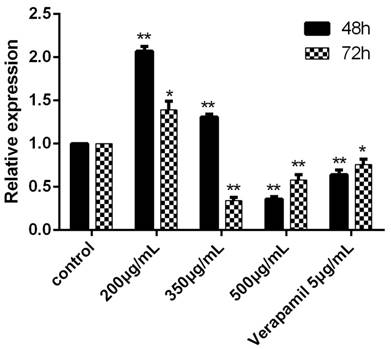 The results of cell apoptosis after 24h were as follows (Figure 8): The proapoptosis effect of K562/ADR treated with tuberostemonine and adriamycin (Figure 8 BCD) were stronger than treated with adriamycin alone (Figure 8 A). The experiment selected the 5μg/mL verapamil as the positive control group (Figure 8 E) and the result showed that the proapoptosis effect of verapamil combined with adriamycin were stronger than group A but weaker than group B, C and D. 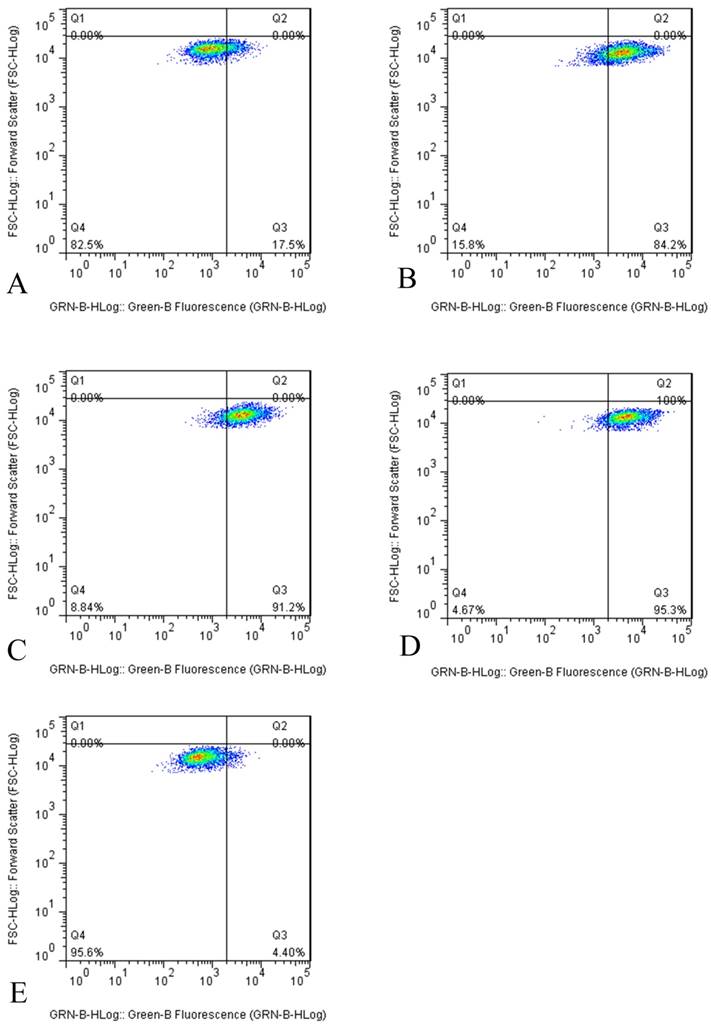 The expression of NF-κB detected by western blot. The reference protein was GAPDH, but the membrane was broken at brood membranes, so that the last stripe could not be seen after developing. 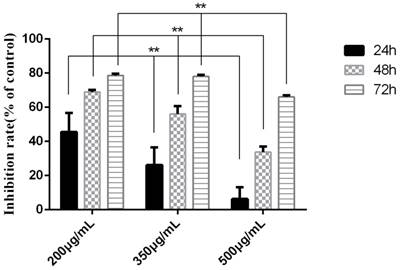 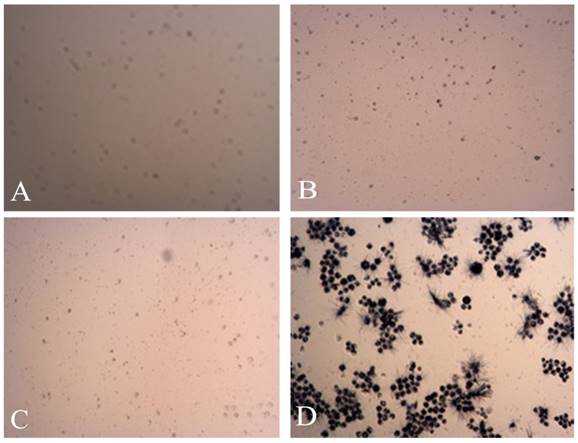 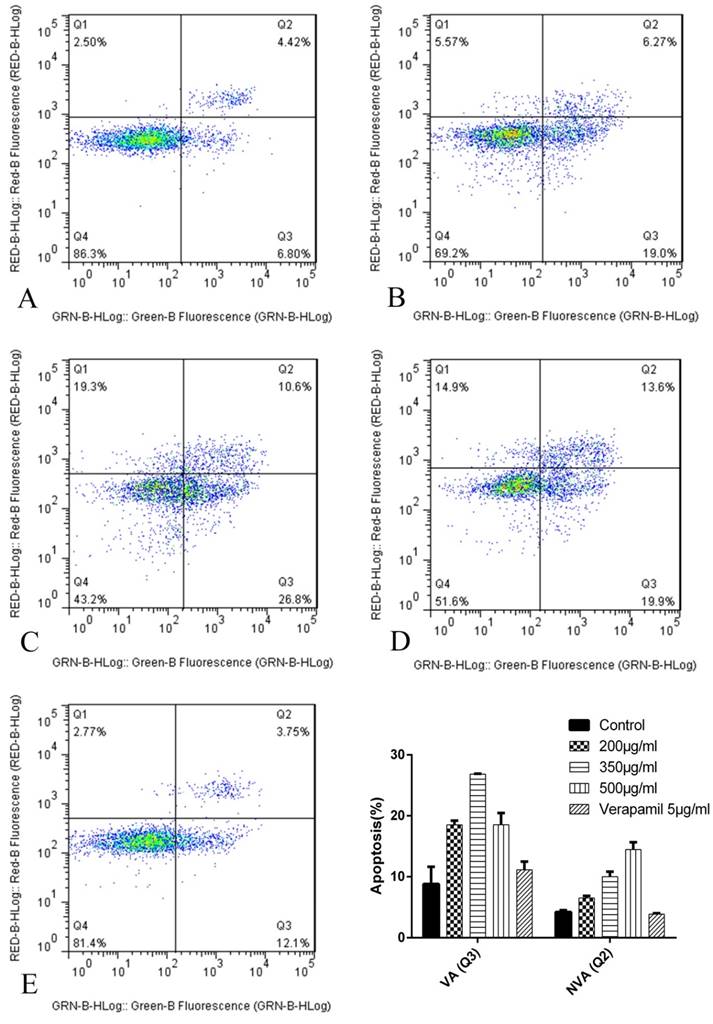 The expression of Survivin and Livin by RT-PCR 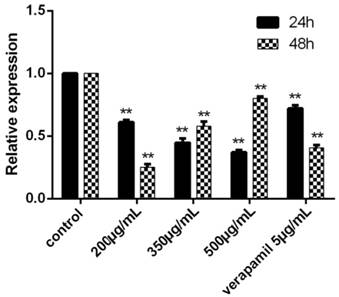 The expression of Survivin by western blot

The result indicated that the expression of Survivin was apparently down-regulated by different concentrations of tuberostemonine pointed out that the MDR of K562/ADR might be related to the Survivin (Figure 10).

MDR is one of the major problems in leukaemia therapy, it is very important to reverse the MDR of leukaemia and improve the prognosis and survival rate of patients.

The overexpression of P-gp is one of the most important reasons for MDR, and the NF-κB is a vital factor to regulate the inflammation and the cell proliferation. It also participates in the regulation of apoptotic genes and is responsible for the survival of tumor cells, which is closely related to the MDR [14, 15]. NF-κB can activate the transcription of ABCB1/MDR1 to up-regulate the expression of P-gp, enhancing the MDR of tumor cells [16]. Livin and Survivin, as the important members of the family of IAPs, are highly expressed in many malignant tumors, which are closely related to the apoptosis of tumor cells. Researches have pointed out that the Survivin and Livin were overexpressed in human acute lymphatic leukemia which is related to the occurrence and development of the disease, therefore, they play an important role in the MDR of leukemia [17, 18].

Early in 1970s, researchers had focused on how to reverse the MDR, the first generation of reversal agents with the representative of verapamil, was mainly aimed at the MDR mediated by P-gp, which reversed MDR via competitive combining with P-gp, but the side effect and the toxicities were intensive. Many natural medicine and Chinese herbal medicine can overcome the problems and have showed great advantages in reversing MDR. It has been reported that the extracts like peoniflorin, curcumin and procyanidin etc. could effectively inhibit the activity of NF-κB, down-regulate the expression of ABCB1 and decrease the P-gp expression [19-23]. In our works, we have employed the extract of Traditional Chinese Medicine Stemona japonica, tuberostemonine as the MDR reversal agent, to study its reversal effect on myelogenous leukemia adriamycin-resistance cells K562/ADR. There were no similar literatures about the inhibitory effect of the stemona extracts on the P-gp of human leukemia cells and the toxicities to leukemia cells, also the enhancement on the chemotherapy drugs for leukemia cells both home and abroad.

The expression of the 20KD Survivin detected by western blot. The reference protein is GADPH.

The molecular mechanism of tuberostemonine on culture cells is still a question. Here we speculate that the inhibitory effect of the tuberostemonine to cells may be due to its inhibition on the synthesis of DNA, RNA and proteins of tumor cells, and then led to cell death. Survivin and Livin are closely related to the down-regulation of caspase-3, csapase-7 and caspase-9, which play an important role in cell apoptosis [24], we inferred the tuberostemonine may protect the activity of caspase-3, caspase-7 and caspase-9 from the Survivin and Livin by down-regulating their expression. Normally, NF-κB binding to IκB could form an inactive complex, the chenmotherapeutic action on the tumor cells can lead to the activation of NF-κB and thus inhibit the cell apoptosis [25]. We supposed that tuberostemonine might down-regulate the expression of NF-κB by acting on the NF-κB: IκB complex, consequently, the chenmotherapeutic could successfully kill the tumor cells.

In conclusion, the reversal effect of tuberostemonine on K562/ADR was not directly related to P-gp, it could reverse the MDR by down-regulating the expression of NF-κB and inhibiting the expression of Survivin. When the concentration of tuberostemonine was between 200μg/mL and 300μg/mL, it had good reversal effects. The tuberostemonine could be a reversal agent for the of leukemia therapy, which can reduce the occurrence of MDR in leukemia chemotherapy and improve the efficiency of leukemia chemotherapy and prolong the life time of leukemia patients. Our study might provide a new prospect for leukamia therapy.