The Role of Adjuvant Chemotherapy for Colorectal Liver Metastasectomy after Pre-Operative Chemotherapy: Is the Treatment Worthwhile?

Colorectal cancer (CRC) is the third most common malignancy worldwide, accounting for 8 % of new cancer cases in both men and women [1]. Liver is the most frequent site of CRC metastases, with an incidence of 25 % at the initial diagnosis and 40 - 45 % after the primary resection within two years [2-4]. When the metastatic disease is isolated to the liver, surgery resection is recommended as the most effective therapy, and it has a 5-year survival rate of 25 - 50 % [5-7]. However, only 15 - 20 % of patients with colorectal cancer hepatic metastases (CRCHM) received radical surgery at the initial diagnosis [8]. Even after the liver surgery, approximately two thirds of the patients relapse within the first 18 months, with the most frequent recurrence in the residual liver [9-12].

Pre-operative chemotherapy has been shown not only to convert the initially unresectable disease to resectable but also to improve the complete resection rate, facilitate hepatectomy, test the chemoresponsiveness, and increase disease free survival for resectable CRCHM [13-15]. However, the regimen-specific hepatic toxicity induced by chemotherapy cannot be ignored, which not only increases the risk of peri-operative mortality but also prolongs post-operative recovery and impairs quality of life. Therefore, the current view is that the metastasectomy should follow the pre-operative chemotherapy by 2 - 3 months or should occur immediately when the metastases become resectable. After a radical resection, a physician is always in a dilemma about whether to continue to give the patient adjuvant chemotherapy. To our knowledge, there were no reports about the value of adjuvant chemotherapy in patients who had received preoperative chemotherapy.

The present study aimed to investigate the role of adjuvant chemotherapy post-metastasectomy in patients who received preoperative chemotherapy and to explore the potential beneficial factors by stratifying patients on several risks of recurrence.

The clinicopathological data were collected from patient charts, which included demographic details, primary location, serum carcino-embyonic antigen (CEA) levels during the treatment, maximum size and number of liver metastases, regimens and cycles of pre-operative chemotherapy and pathological information of the primary tumor. Tumor stage was reclassified according to the Union International Control Cancer staging system, version 7. Computerized tomography (CT) or a magnetic resonance imaging (MRI) procedure was used for radiological response assessment according to response evaluation criteria in solid tumors version 1.1 [16]. The initial images before the preoperative chemotherapy were compared with those after the end of the treatment but before the liver resection. The initial serum CEA levels were also compared with those after the preoperative chemotherapy but before surgery.

After the liver resection, follow-up was routinely performed every 3 months for the first 3 years and then every 6 months for 5 years, which included physical examination, CEA and CA19-9 levels, and a CT or MRI. The date of relapse and death were confirmed by the hospital records or phone contact with the patient or their relatives. This study was approved by the Ethical Board of Sun Yat-sen University Cancer Center and was conducted in accordance with the Helsinki Declaration of the World Medical Association. Given the non-interventional retrospective design, informed consent was not required in this study.

The role of adjuvant chemotherapy after the liver resection was tested for relapse-free survival (RFS) and overall survival (OS) using the Kaplan-Meier method with a log-rank test. RFS was defined as the time from liver surgery to the first relapse at any site or death due to any cause. OS was calculated from the metastasectomy to death from any cause. The univariate and multiple analyses were performed using Cox proportional hazard models. Comparisons between groups were analyzed with Student's t, Parson's Chi-squared or Fisher's exact test when appropriate. All statistical tests were performed using IBM SPSS software (version 22) with a two-tailed test. The variables were considered statistically significant for P values < 0.05.

The present study consisted of 163 patients with CRCHM who underwent hepatic metastasectomy after preoperative chemotherapy (Figure 1). Baseline characteristics are listed in Table 1. The current population consisted primarily of males (63.2 %). The median age at the time of hepatic resection was 49 years (range: 28 - 83). The primary tumor was predominantly identified as colon cancer (65.6 %). All patients received FU-based chemotherapy, including 61 patients who received combinations with HAI (n = 15) or bevacizumab (n = 22) or cetuximab (n=24). The median number of cycles was 4 (range: 2 - 12), and 78 patients (47.9 %) underwent a short-duration preoperative treatment (namely, ≤ 4 cycles for 2-week regimens, ≤ 3 cycles for 3-week regimens), whereas 85 (52.1 %) received a long-duration treatment. The clinical and pathologic characteristics were comparable between the adjuvant chemotherapy and surveillance arms, as listed in Table 1.

For the risk stratification by tumor radiologic evaluation, patients who obtained PR for preoperative chemotherapy can benefit from adjuvant chemotherapy post-metastasectomy on RFS (mRFS 1.4 vs.10.7 m, P < 0.001), whereas for those with SD, the benefit trend of adjuvant chemotherapy did not reach statistical significance. However, both the patients with PR and SD obtained a longer overall survival from treatment with adjuvant chemotherapy compared to observation post-surgery (mOS 36.1 vs. not reached, P = 0.049; and 25.3 vs. 38.0 m, P = 0.012, respectively; Table 3, Figure S1).

In the present study, 163 CRCHM patients with liver resection after pre-operative chemotherapy were retrospectively analyzed. The results showed a benefit in both RFS and OS in the adjuvant chemotherapy arm compared to the observation arm. Considering the impact of aggressive disease on post-surgery decisions, we further excluded 10 patients who had rapidly progressing disease within 1 month in the sensitivity analysis. The adjuvant chemotherapy remained to prolong the RFS and OS for patients after liver resection. Although the study is limited by its retrospective design, to our knowledge, it is the first report to focus on the necessity of continued chemotherapy post-metastasectomy after prior pre-operative chemotherapy. 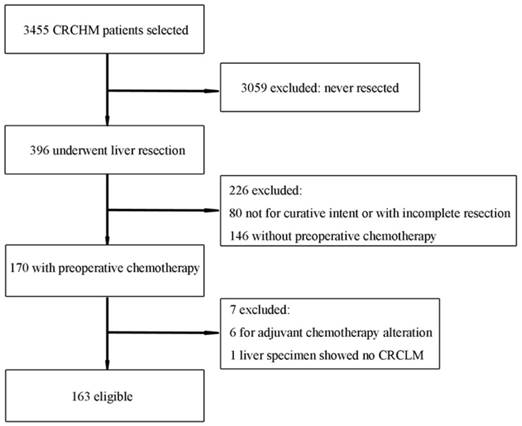 Kaplan-Meier curves of Relapse-free survival (A) and Overall survival (B) according to treatment post-liver resection, based on the whole population (N = 163).

Role of adjuvant chemotherapy post-metastasectomy after the risk stratification

Chemotherapy, as an approach that can potentially improve survival, is proposed for peri-operative treatment, although the optimal regimens and duration have not been defined. The EORTC40983 trial randomly assigned 364 patients with resectable mCRC to 6 months of peri-operative mFOLFOX4 chemotherapy (3 months before and 3 months after) or surgery followed by observation. A 9.2% increase in PFS was observed in patients undergoing resection with peri-operative chemotherapy compared to surgery alone (HR [95% CI] 0.73[0.55 - 0.97], P = 0 .025) [19]. However, the difference in OS between the groups did not reach statistical significance after the long-term follow-up [20]. This was the first trial to confirm the role of perioperative chemotherapy for liver resection with adequate statistical power. However, no further analysis was performed on the value of 3 months of post-surgery chemotherapy on the premise of pre-operative chemotherapy. Other randomized trials were performed to compare adjuvant systemic chemotherapy following metastasectomy with surgery alone [21-24]. The results were inconsistent with inadequate power. Mitry et al then pooled the 278 patients from the EORTC 40923 trial and FFCD 9002 trial and reported that adjuvant FU/LV chemotherapy improved the PFS (HR [95 % CI] 1.32 [1.00 - 1.76], P = 0.058) and OS (HR [95 % CI] 1.32 [0.95 - 1.82], P = 0.095) of patients with liver resection with critical statistical significance [25]. Nevertheless, none of these studies enrolled patients who had received prior chemotherapy before liver resection.

In a further stratification analysis of the present study, FU-based adjuvant chemotherapy dramatically improved the RFS and OS in the synchronous subgroup but not in the metachronous groups. This finding was consistent with previous analyses, conducted by Wang et al, who showed that synchronous metastatic CRC seemed to have a greater survival benefit from the adjuvant chemotherapy post-liver resection, although the study didn't restrict the included patients with having pre-operative chemotherapy [26]. This fact was most likely due to the poor prognosis of patients with synchronous metastases, who need a more aggressive post-surgery treatment, such as chemotherapy, to treat the micro-metastatic disease. Alternatively, most patients with metachronous metastases had a history of prior adjuvant chemotherapy post-primary tumor resection, which most likely reduced the sensitivity to re-chemotherapy. In addition, our results showed that a patient with risk factors, including more liver metastases, larger sized metastases or a poorer degree of tumor differentiation, which implies a more malignant disease, can have a greater survival advantage from post-metastasectomy chemotherapy.

Patients who had obtained a partial response from the pre-operative chemotherapy can benefit more from continuous post-liver resection chemotherapy. These patients represented the population with higher chemo-responsiveness, whereas adjuvant chemotherapy can prolong the overall survival, even for those whose best response was only stable disease.

Although the two arms (surveillance/adjuvant chemotherapy arm) were balanced among the risk factors, the retrospective design and small sample size weaken the power of the conclusion in our study, particularly for the subgroup analysis, which was based on a smaller sample size. The preliminary results should be interpreted with caution.

Adjuvant chemotherapy post-hepa-metastasectomy can be considered even for those who had received pre-operative chemotherapy, and the management plan should be determined based on the risk factors for each patient. Further prospective clinical trials are warranted.

Our gratitude is expressed to all the patients for the participation in this study. We also appreciate all colleagues in Sun Yat-sen University Cancer Center, who have participated in performing the treatment in the current study. Medbanks (Beijing) Network Technology Co., Ltd was thanked for data collection.

Ethical approval and consent to participate: All procedures performed in studies involving human participants were in accordance with the ethical standards of the institutional and/or national research committee and with the 1964 Helsinki declaration and its later amendments or comparable ethical standards. A waiver of informed consent was request, and approval was obtained from independent ethics committees of Sun Yat-sen University Cancer Center.