BACKGROUND: Notch signaling has been demonstrated to frequently participate in the process of lung carcinogenesis. This study aimed to search Notch expression in non-small cell lung cancer (NSCLC) and its impact on survival.

METHODS: From 2001 to 2011, patients with diagnosis of NSCLC who received surgical resection were included. The expression of Notch gene was assessed by real-time polymerase chain reaction (RT-PCR). Clinical characteristics, histological types, disease stages, and outcomes were analyzed.

Lung cancer is a leading cause of cancer death in many countries, and non-small cell lung cancer (NSCLC) accounts for around 85% of lung cancers (1). Despite the advance of different therapeutic regimens, the 5-year survival of NSCLC has remained at 15% in the past decades (2). It is therefore imperative to deepen the understanding of the molecular mechanism of NSCLC, and to find novel therapeutic strategies for this disease.

Notch signaling has been demonstrated to frequently participate in the process of lung development and lung carcinogenesis (3-8). Notch signaling pathway is associated with angiogenesis which is an essential step for tumor growth and progression and plays a vital role in tumor invasion and metastasis (9-11). The mammalian Notch family consists of four receptors, Notch1-4, and five ligands, Jagged 1 and 2, and Delta-like ligand1, 3, and 4 (DLL1, -3, -4). The majority of studies consider that Notch1 is involved in cancer promotion (12, 13). It is hypothesized that Notch1 and 3 are associated with NSCLC (14, 15).

Until now, the role of Notch in lung cancer development remains elusive. Otherwise, the association of expression of Notch gene with its impact on prognosis in NSCLC has not be well clarified. Here, we will describe the expression of Notch1 to Notch4 gene in different NSCLC histology types and investigate the influence of Notch expression on survival.

From the year 2001 to 2011, patients with diagnosis of NSCLC who received any surgical resection as lobectomy or wedge resection at National Taiwan University Hospital were included.

Disease stages were reviewed and determined by the 7th version of the TNM staging system for lung cancer of the International Association for the Study of Lung Cancer (IASLC). The medical records were analyzed for age, gender, smoking history, underlying diseases, histology type, tumor staging, recurrent or metastatic site.

The expression of Notch elements was assessed by quantitation real-time polymerase chain reaction (RT-PCR). Taqman Gene expression assay with TaqMan® RNA-to-Ct™ 1-Step Kit was used to analysis Notch1 - 4 from cancer tissues. Standard curve with gene expression amplification was plotted to difference in gene expression and standard deviation in the replicate groups. Ct values for each well and for each replicate group was calculated. Relative RNA expression were presented by 2-ΔΔCt. If 2-ΔΔCt > 1 is defined as higher Notch expression.

Formalin fixed paraffin-embedded sections were deparaffinized and rehydrated (Xylene 1:1 with 100% ethanol, 100% ethanol down to 50% ethanol). Next, the sections were heated by microwave in citrate buffer pH6.5 for 20 min total for antigen retrieval. Then block endogenous peroxidases in 90 ml methanol/10 ml 30% H2O2 for 10 minutes at room temperature was performed, followed by wash in PBS. Slides were then incubated with primary antibodies for Notch2 (ab8926, Abcam, diluted 1:100), overnight at 4∘C. The immunohistochemical reaction was visualized and analyzed using a microscope. Peripheral normal lung tissue was used for the negative controls. Immunostaining was defined independently by two pathologists blinded to the clinical data and scored by multiplying the intensity of staining and the percentage of the stained tumor cells. The intensity of staining was graded as follows: 0 (colorless), 1 (weak, pallide-flavens), 2 (moderate, yellow), and3 (strong, brown).

Continuation variables are expressed as mean with standard deviation and categorical variables are expressed as a percentage of the group from which they were derived. The proportion between groups were compared by Pearson chi-square test or Fisher exact test. ANOVA analysis with Post Hoc was used to difference the expression of Notch1 - 4 (2-ΔΔCt) in different histology type. Cox regression model was used for covariate analysis to determine the hazard ratio of Notch expression and survival. A p value less than 0.05 was considered significant. All analyses were performed using the SPSS software (version 16, SPSS Institute, Chicago, IL).

Patients' clinical characteristics and the association of Notch gene expression

Demography data of 97 patients with NSCLC for Notch gene analysis 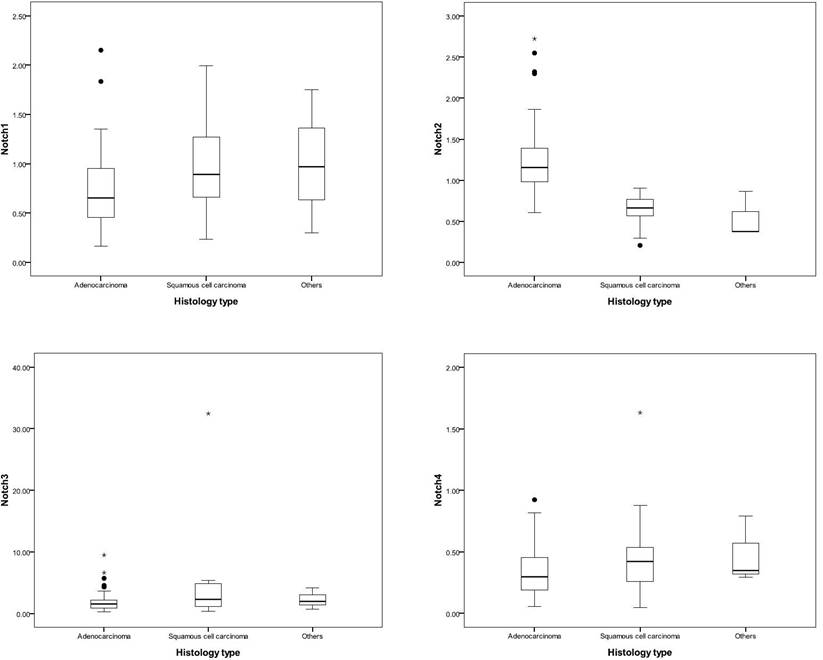 The effect of Notch expression on survival 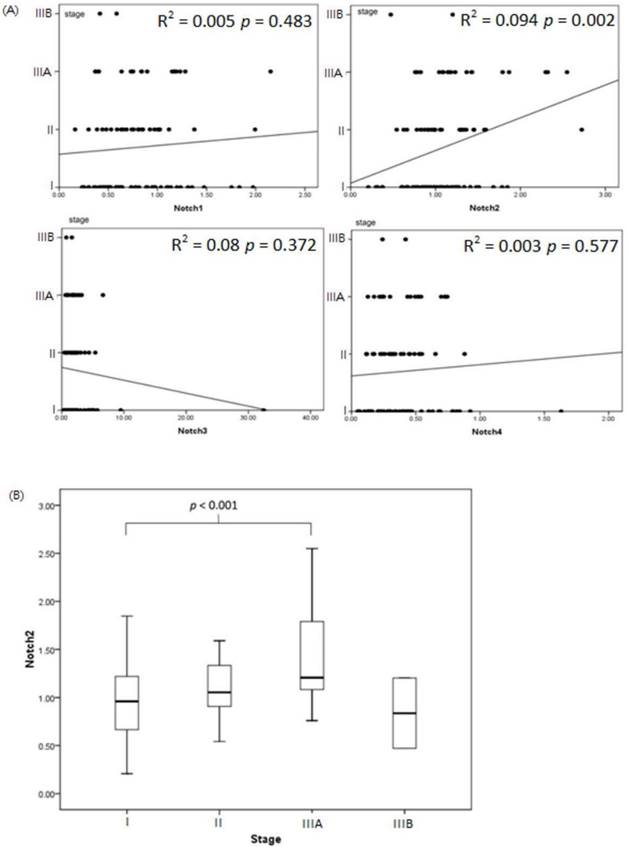 Recent study demonstrated that Notch1 expression is higher in lung squamous cell carcinoma (16) and Notch3 is over-expressed in about 40% of NSCLC (17-19). In our study, patients with lung cancer who had smoking history had higher Notch3 expression. Notch1 and Notch3 expression were consistently higher in lung squamous cell carcinoma. Besides, we also find that patients who were female, never smoking and with lung adenocarcinoma, have significant higher Notch2 expression. Therefore, this finding approves that Notch2 signaling plays an important role in mutation of lung adenocarcinoma (20), especially in never-smoking female at east Asia. 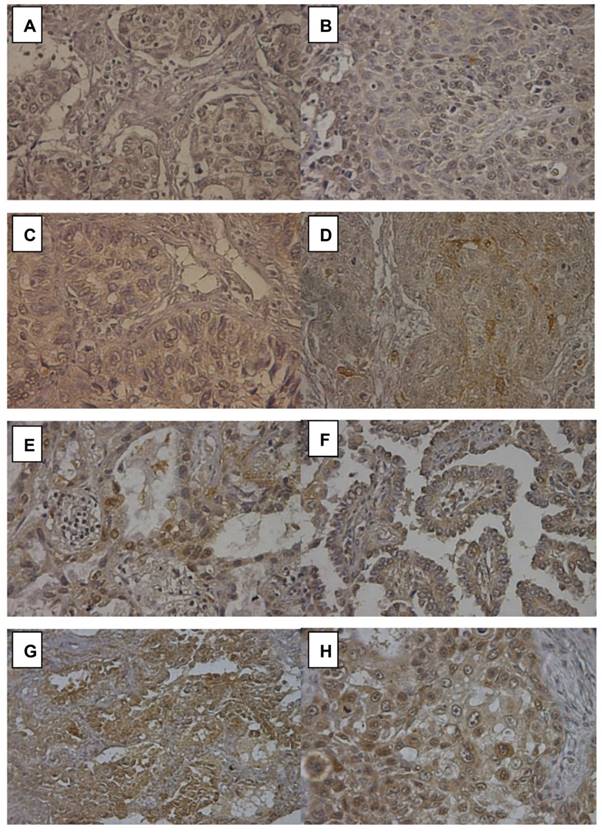 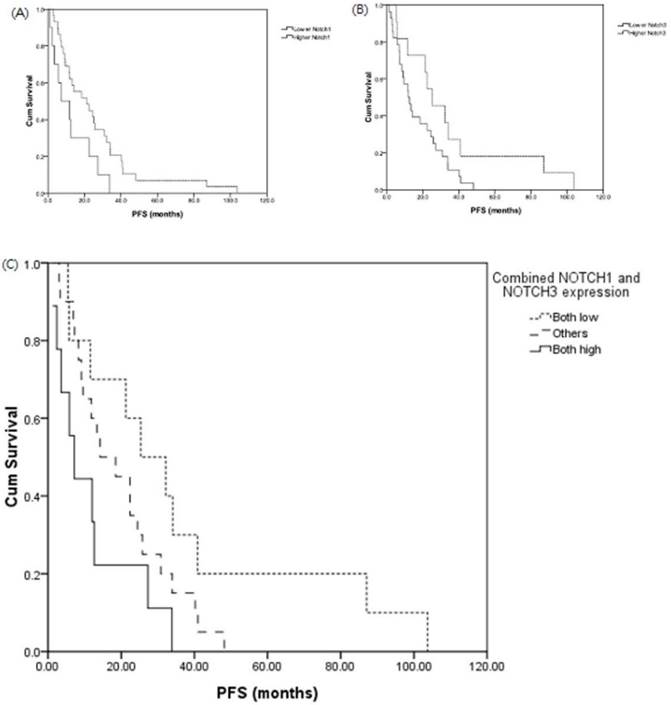 Notch1 and Notch3 have long been regarded as candidate molecules responsible for the development of lung cancer (14-19), while few studies have delineated a specific role for Notch2. Whether Notch2 has similar roles as Notch1 and Notch3 remains to be determined. Our results showed that Notch2 expression positively correlated with more advanced lung cancer stages and higher rate of cancer recurrence or metastasis. However, the expression of Notch2 had no impacts on DFS and OS in patients with lung adenocarcinoma. A recent study demonstrated that upregulation of Notch2 is a transcriptional aberration that contributes to preinvasive-to-invasive lung adenocarcinoma progression by inducing epithelial-mesenchymal transition (EMT) and nuclear atypia (21). These findings suggested that Notch2 plays a role during the early-stage lung adenocarcinoma progression. Recent work in Notch pathway activity in cancer cells shows EMT promotion (22-25) and enhancement of cancer stem cell characteristics (26), and interestingly, implicates Notch signaling in several cancers displaying resistance to conventional chemotherapy (27, 28). Higher activities of Notch pathway in lung cancer stem cells indicated worse survival of lung adenocarcinoma (29). Therefore, Notch pathway activity may encourage EMT formation and Notch2 is a key clue.

Several studies have examined the relationship between Notch expression and survival in patients with NSCLC. A recent meta-analysis indicated that higher expression of Notch1 by immunohistochemistry was associated with greater possibility of lymph node metastasis and more advanced TNM stages (30). Mimae et al. (21) revealed that paired upregulation of Notch2 and Six1 is associated with disease progression by clinicopathologic features and shorter DFS in patients with invasive adenocarcinoma. Our research showed that increased Notch2 expression was associated with more advanced lung cancer stages. Expression of Notch1 also positively correlated with advanced disease stages but the correlation was not statistically significant. In our study, the expression of Notch elements was assessed by RT-PCR, but patient selection bias and different laboratory techniques may cause distinct results. Therefore, further large-scale studies with consistent analytical methods are warranted.

Though, the differential function between Notch1 to Notch4 is not well known. The activation status of Notch1 had poor prognostic impact on NSCLC (32) and was used to predict overall survival in the subgroup of p53-negative NSCLC patients (14, 33). Notch1 also contributes to epidermal growth factor receptor (EGFR) tyrosine kinase inhibitor acquired resistance in NSCLC (34, 35). Besides, Notch3 expression is positively correlated with EGFR expression (36), and Notch3 overexpression associates with poor prognosis in NSCLC (37, 38). EGFR mutation status was not analysis at our study, but the mutation rate was relative higher in east Asia. Therefore, higher Notch1 and Notch3 expression was showed to relate to poor DFS of lung adenocarcinoma in our study.

We are indebted to Ms. Yi-hsiu Juan and Ms. Chao-Jung Chang for help with laboratory techniques, the First Common Laboratory of National Taiwan University Hospital, Yun-Lin Branch, for technical support.